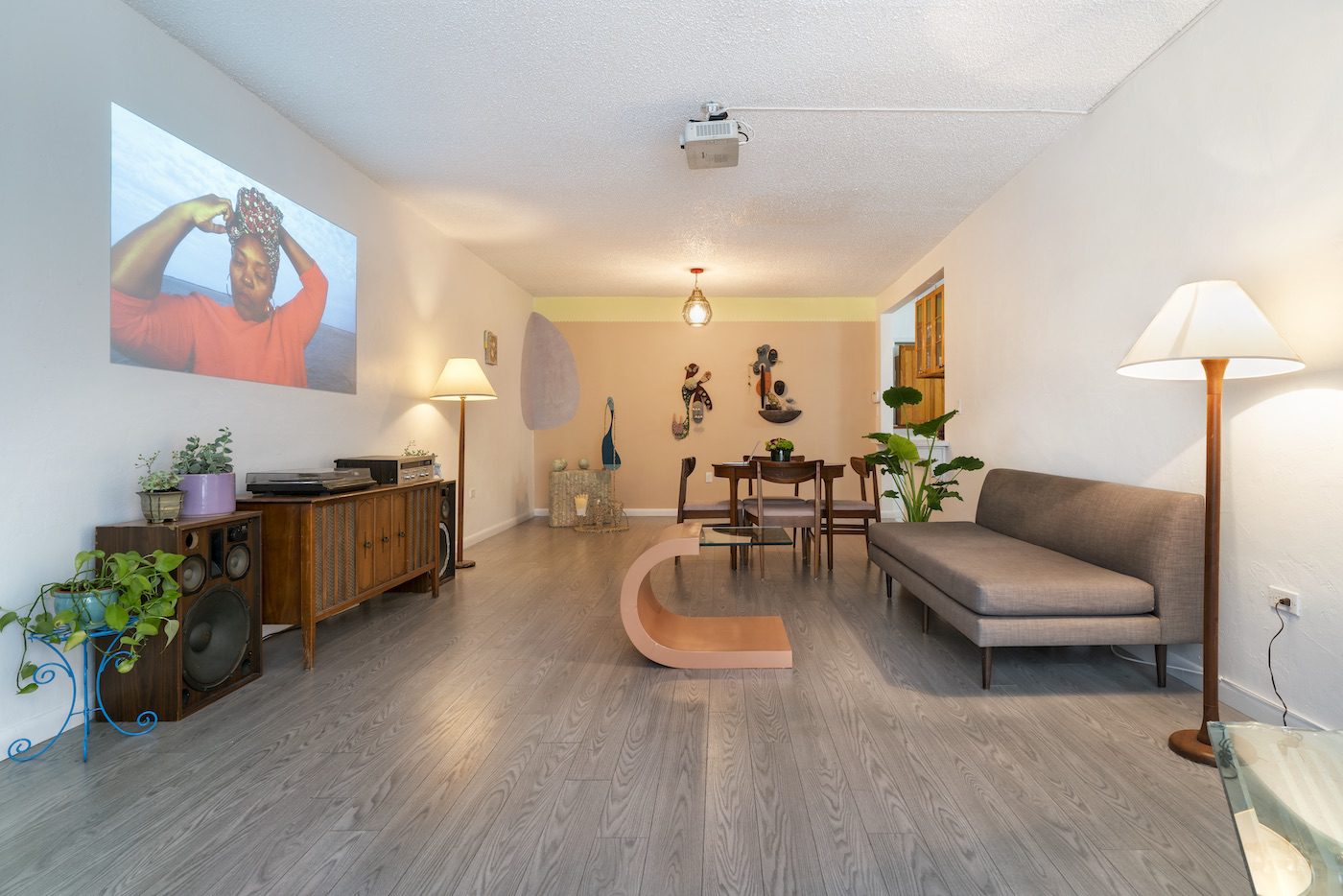 Installation View "The body as a centerpiece". (left) The Ritual, a film produced by Mahogany L. Browne and Cecil McDonald, Jr., Browne
1/7
1/7 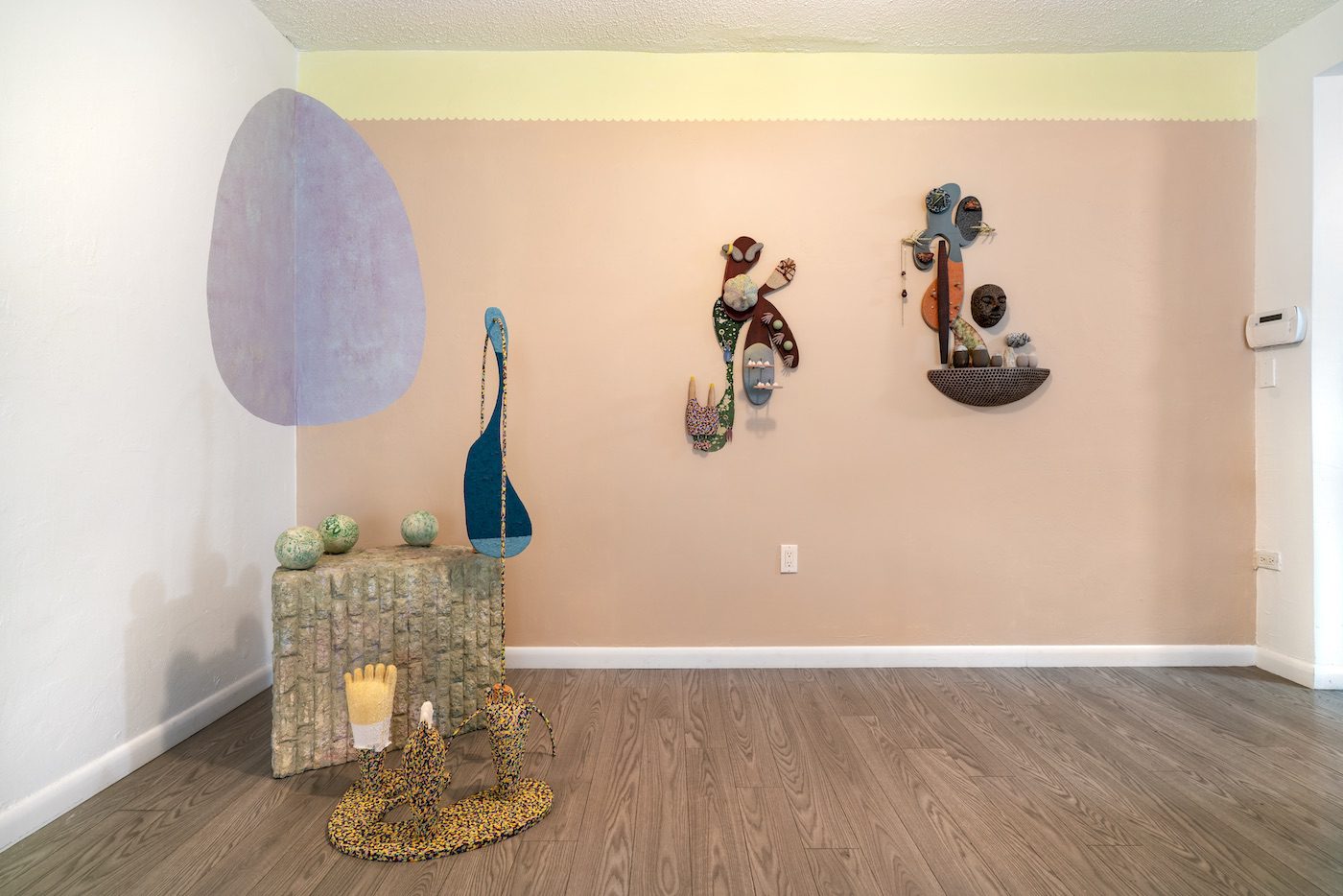 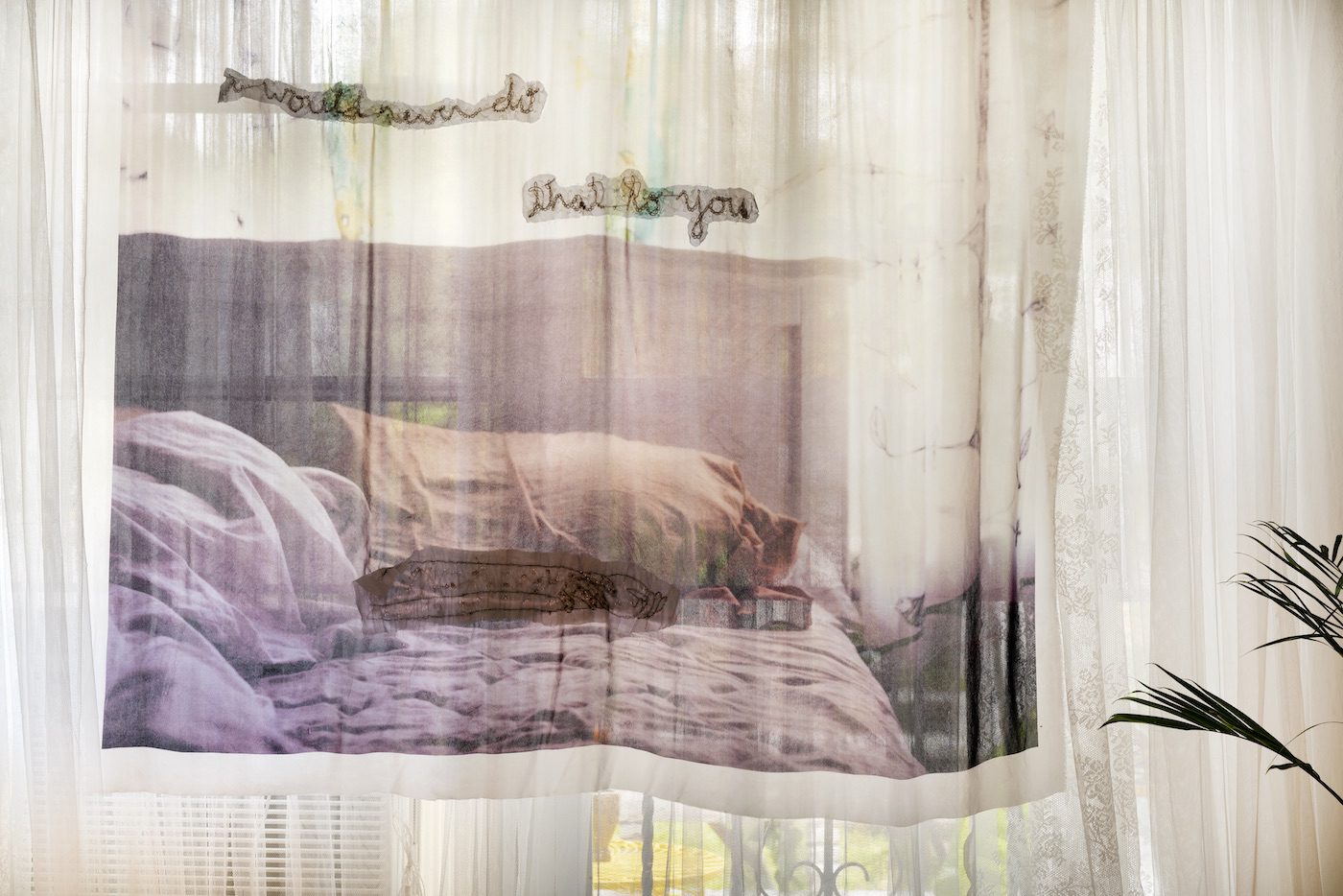 Michelle Lisa Pollissaint, I would never do that to you
3/7
3/7 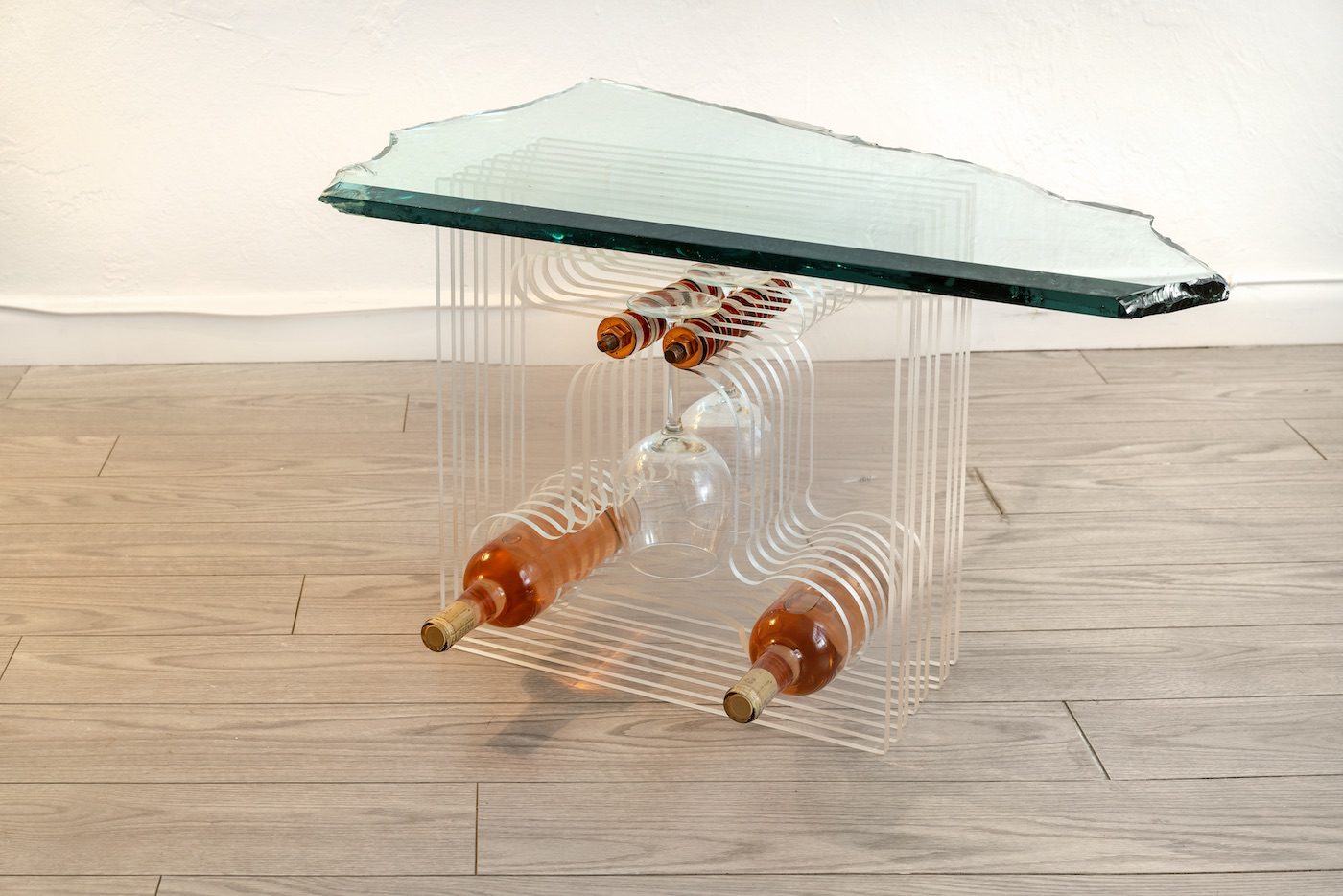 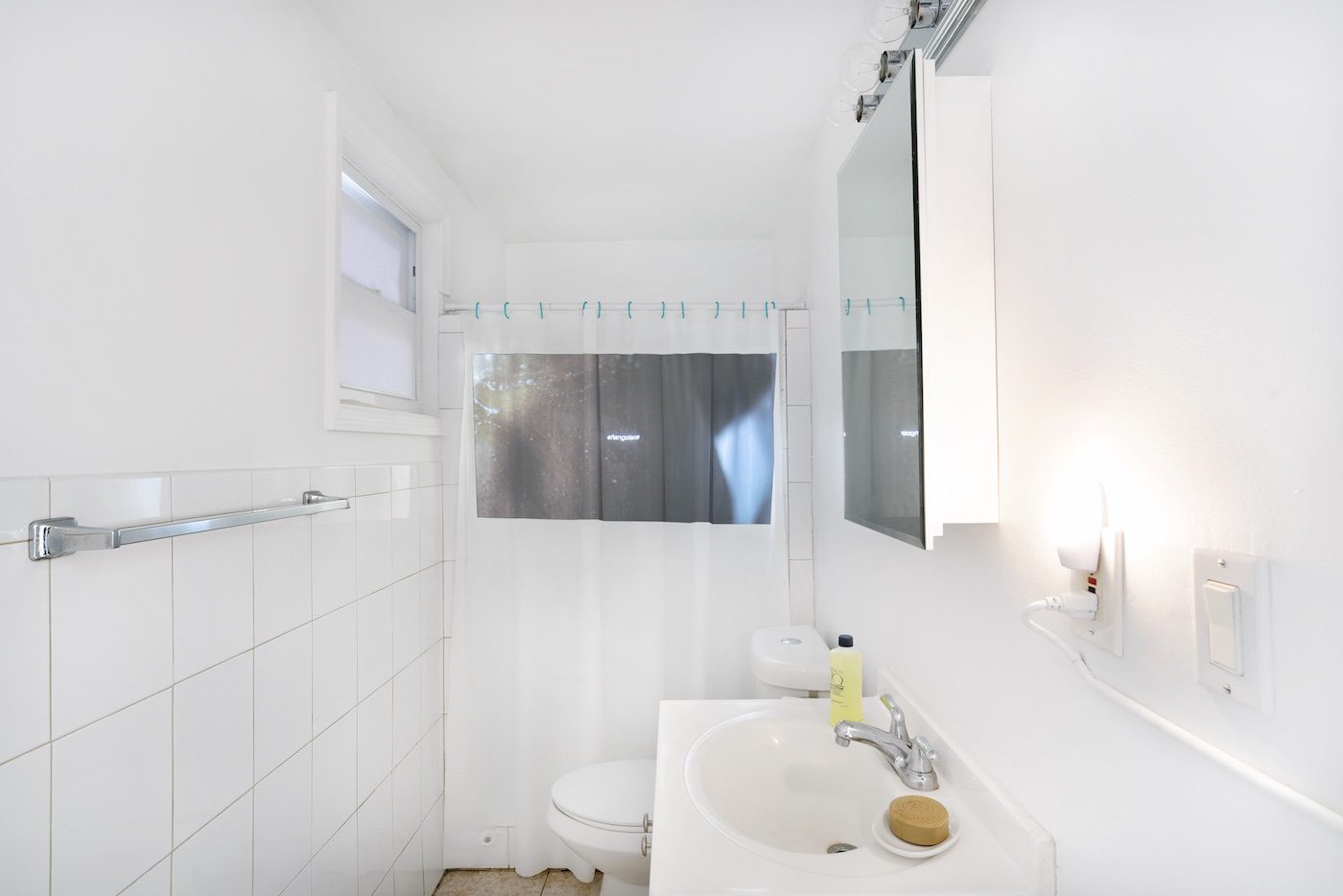 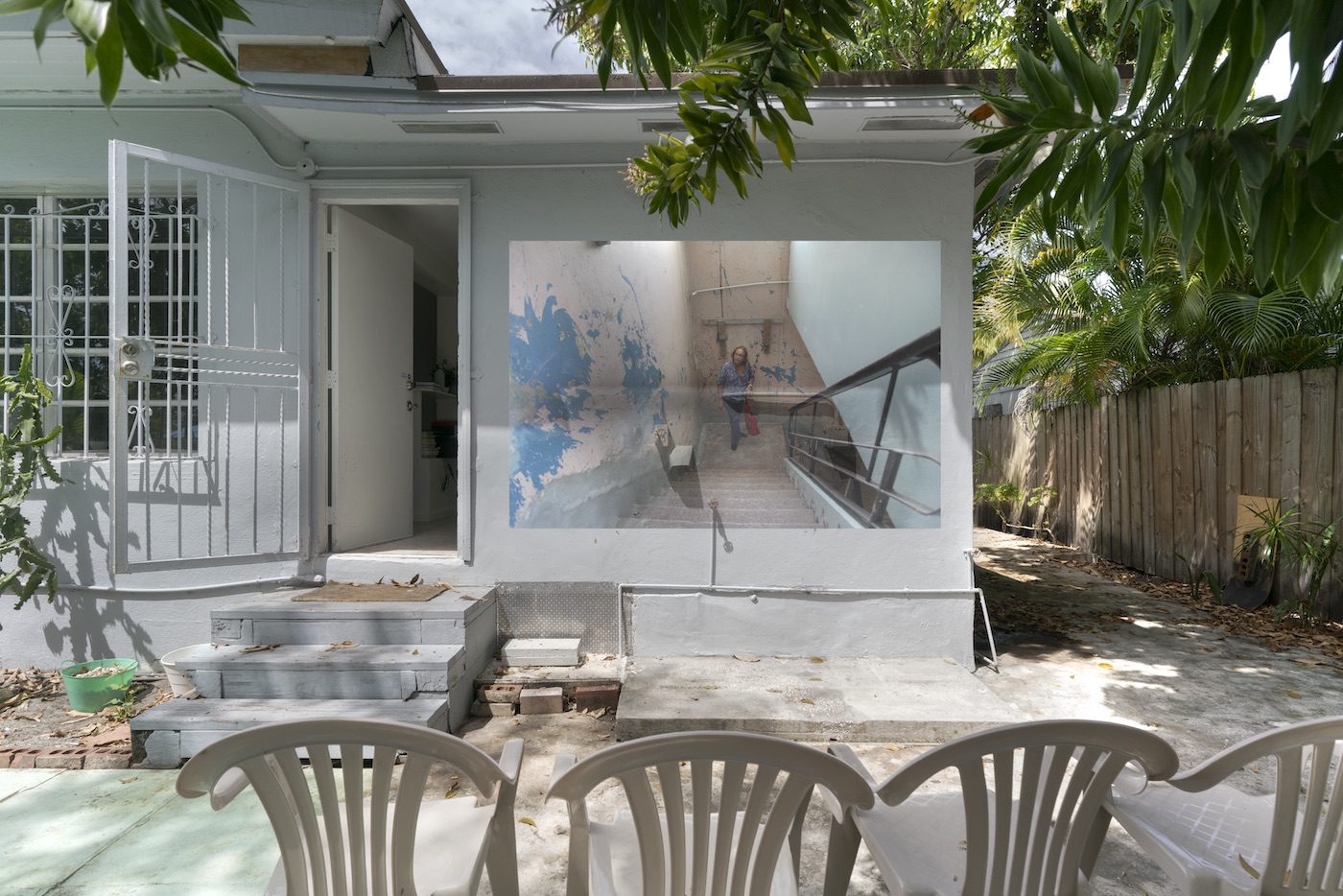 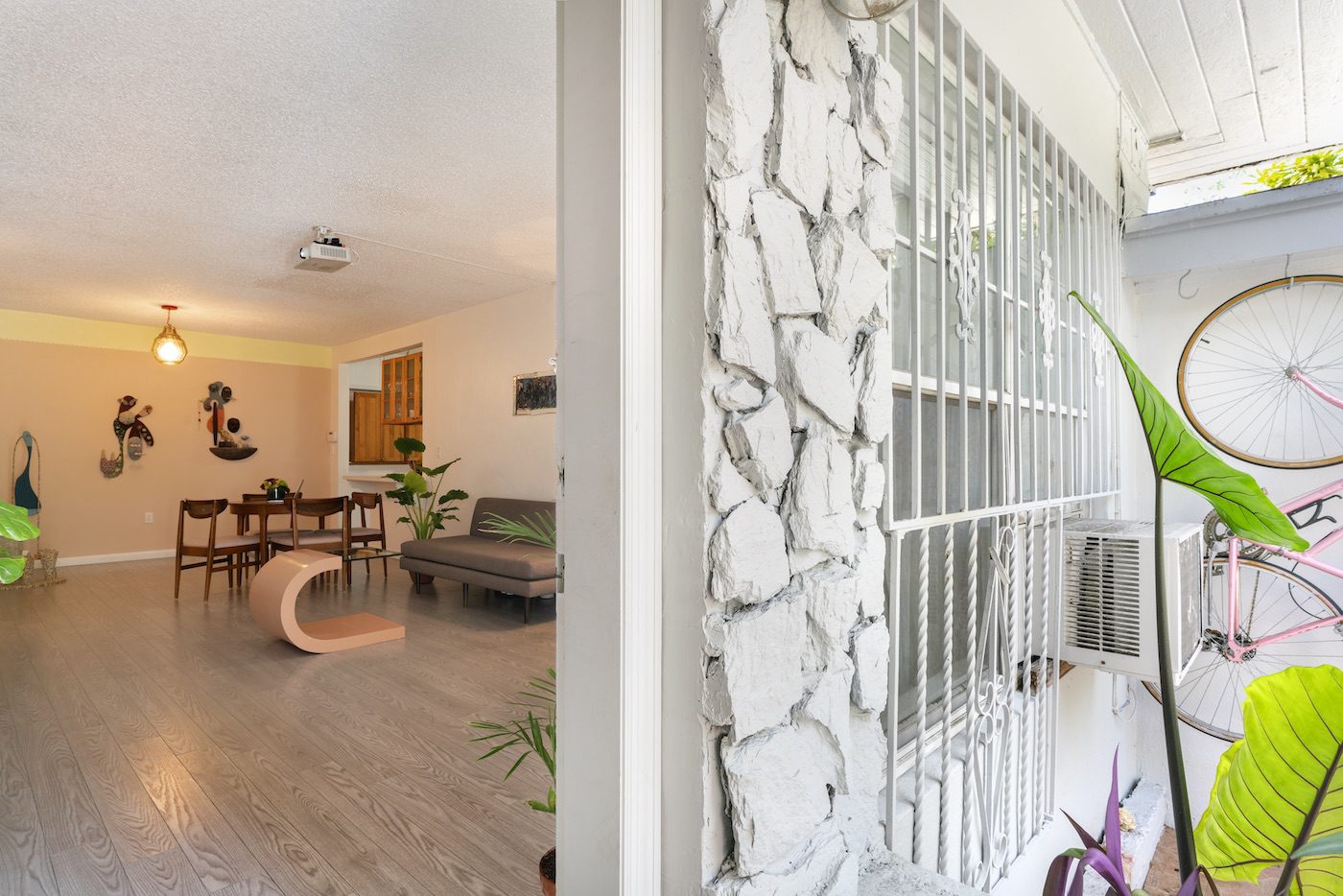 The body as a centerpiece

The Exhibition Exploring Domestic Space as the Backstage of Life

Taking place in a community-driven art space in a gentrifying Miami neighborhood, The body as a centerpiece is a group show exploring the relationship between the home and the self. Seven artists interpret the concept of home and its ability to nurture, shield, and confront our identities, while remaining a hearth for our private insecurities and fears, writes Nicole Martinez.

Installation View "The body as a centerpiece". (left) The Ritual, a film produced by Mahogany L. Browne and Cecil McDonald, Jr., Browne

Displayed at the newly inaugurated Supplement Projects, an alternative, community-driven space run by artists and based in a residential home in the historic Buena Vista neighborhood in Miami, the film forms part of a group exhibition aimed at exploring the changing architecture of the domestic space. The body as a centerpiece, featuring works by seven artists, explores the concept of home and its ability to nurture, shield, and confront our identities, while remaining a hearth for our private insecurities and fears. In the exhibition, the body becomes an essential material through which to explore our relationship to the spaces we occupy.

In a 1940s home enveloped by tropical palms and pastel pink acacias, Supplement Projects sits within the crossroads of Little Haiti and the Miami Design District, a luxury shopping enclave in the center of one of Miami’s poorest neighborhoods. Because of this new construction, the neighborhood’s typography is constantly in flux; newly remodeled homes, painted cream and beige, disrupt humbler abodes colored mango and mamey. The contrast of extravagant wealth and modesty draws our focus inwards: Who are the people making a home inside these disparate dwellings? How do their experiences intersect? Does sharing this neighborhood unravel their differences, or bring them even sharper into focus?

In many ways, Supplement Projects founder GeoVanna Gonzalez opened her home as a public exhibition space to get to the heart of this question. “The concept behind every show is to explore critical art outside the white cube, unifying the public and private space and creating a stronger point of access,” says Gonzalez, a Los Angeles native who moved to Miami in 2017 to complete an artist residency, and wound up staying. Gonzalez shares the home with four other people; she uses a brightly lit Florida room near the back of the house as her studio.

In this intimate space, sparsely furnished with midcentury furniture, tropical plants and a futuristic coffee table by artist collective NUN, which forms part of the exhibition, McDonald Jr. discusses the making of The Ritual with a group of artists and writers. The film was conceived of and produced while completing the Rauschenberg Residency in Captiva, Florida, where Browne and McDonald Jr. met and immediately connected. “Every day she would walk into the meeting hall with these colorful scarves, and she would charge the space with her energy coming from this crown balanced on her head,” said McDonald Jr. As a multimedia artist exploring masculinity and familial relations through the lens of Black culture, McDonald Jr. wished to document how Browne used her creativity as a way to enter the world.

Shooting against the backdrop of a calm blue sea, on a dock that served as inspirational fodder for the artists attending the residency, McDonald Jr. captured Browne dressing and undressing her hair in her head wraps as she stared silently into the camera. “I wanted her to do something with this film, so that it wouldn’t just be my gaze portraying this ritualistic act,” he said. Browne set to work with her pen, delivering her poem, Ritual, just two weeks later. The pair decided that Browne would recite the poem as the audio portion of the film. The rhythm of the poem, her words echoing against the gentle roar of the waves behind her, fit perfectly over McDonald Jr.’s frames.

The film plays on the concept of ritual as a sort of performance. One can imagine Browne performing this same act in front of a mirror, bracing herself for the day. It’s easy to draw a parallel between Browne’s ritual and the habits of Gonzalez’s neighbors, who now walk luxury store-lined sidewalks as though they are strangers or intruders, in contrast to the long-time dwellers of this historically Haitian place. How might they prepare to go outside?

In another film, Retiro, artist Natalia Lasalle Morillo interviews women over the age of 65, living in Cuba, Puerto Rico, and Miami. The series was designed to reconstruct its subjects’ memories, revealing the inherent fragility of the human experience. If Browne and McDonald Jr.’s film considers the home as a safe space through which to strengthen their public personas, Lasalle Morillo’s film presents home as a respite or place of retreat. In an excerpt, her subject Gloria uses a machete to swirl the dirt within a potted plant. “You have to move the soil around, otherwise it hardens into a rock,” she tells the filmmaker, as she laments having recently been confined to a wheelchair. The loneliness of aging is thrust into perspective: Gloria, like the soil, craves movement to keep from hardening; she finds comfort in tending to her garden as she smokes a cigarette, staring blankly into the street beyond its gates.

“What are you thinking about?” Lasalle Morillo asks. “I’m thinking about how I’ve lost my garden,” she replies solemnly. “Not like it’s run away, but that it’s gotten ugly in this time that I couldn’t care for it.” A metaphor for her own crippled energy, she accepts that things she once did won’t come as easily as before. At home, she is at once comforted and uncomfortable with her own limits. Home is a reflection of her aging body, yet in it, she finds a place to rest. 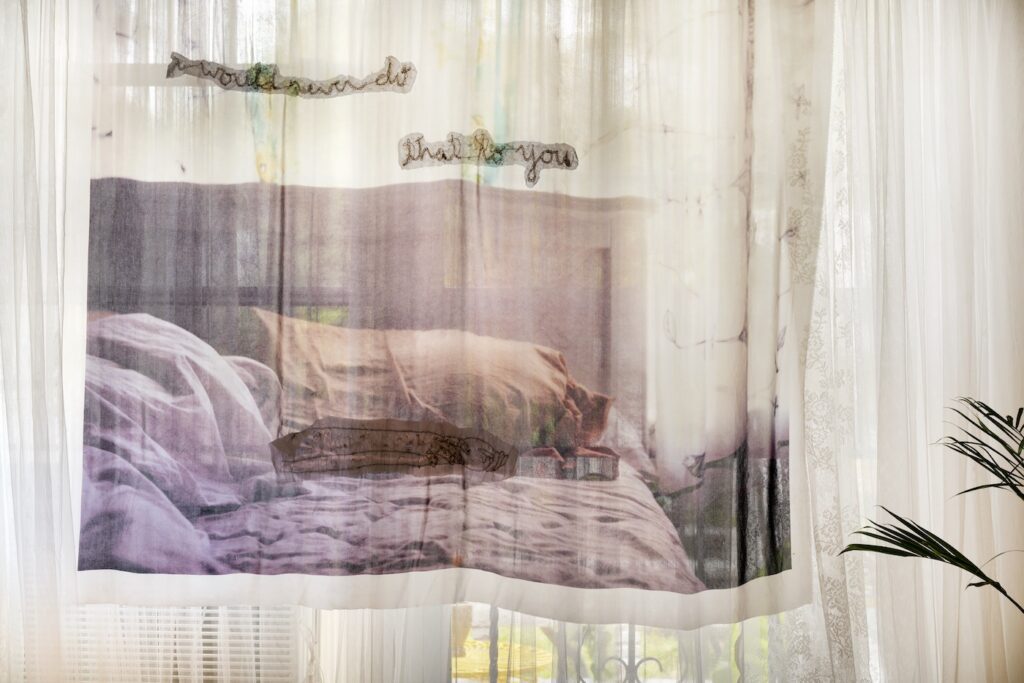 Michelle Lisa Pollissaint, I would never do that to you

Michelle Lisa Polissaint’s work considers a similar dichotomy within the home; in particular, how the space you share with a lover can become a prison once that flame has gone out. I would never do that to you, a photograph from the series The Ballad of Me and You, is a sensitive portrait of the longing that endures after a relationship ends. Next to a forlorn pillow, crumpled sheets seem to hold a human form underneath; peeking out the corner, Polissaint has used cotton thread to stitch two outstretched arms, their hands reaching for one another. The absence of her significant other seemingly leaves a gaping hole in their shared bed, but Polissaint unequivocally states that the series is meant to be optimistic. “I’m searching for light and joy in the reality of broken relationships and existing on my own,” she shares on her website. “Failed relationships are beautiful, complicated, and an important part of learning to float into successful partnerships. At the end, they are all some kind of success.”

Nostalgia is also present within a series of works by Venezuelan artist Juan Pablo Garza, whose practice compiles found, purchased, and gifted objects to create new stories around their significance or use. These objects are almost always some sort of personal reference to his upbringing or experiences, and aim to imbue the work with an emotional character. Lately, references to the body have crept up repeatedly, as evident in his inclusion of arms, hands, faces, and eggs. “The idea of the body is relatively new in my work, and it came about when I moved from Venezuela to the United States,” Garza says. “I think I was responding to feeling unwhole, as though I didn’t quite have an identity.” In The body as a centerpiece, Garza’s sculptures take over a corner of the home and showcase how the artist is increasingly giving a figurative form to his overtly conceptual pieces. Questioned whether this might indicate that he is finding himself in his new Miami home, Garza hesitates before deciding that it is a reflection of the ignorance of memory. “That longing for my home, in our memories everything is different and becomes easier,” he says. “But in the end it’s a lie.”

“The domestic space is the backstage of life,” writes Browne. The architecture remains the same, but the actors are constantly shifting and growing. In The body as a centerpiece, our innermost selves are revealed with trepidation and tenderness, demonstrating that no matter how, where, or with whom we live, our selves within it render it sacred.

The body as a centerpiece is at Supplement Projects, Miami, USA until 26 May 2019.

Nicole Martinez is a writer and editor based in Miami covering Latin American and Latinx artists and movements. Her writing has appeared in ARTnews, Wallpaper*, Hyperallergic, Cultured, and more. Follow her on Instagram @niki_frsh