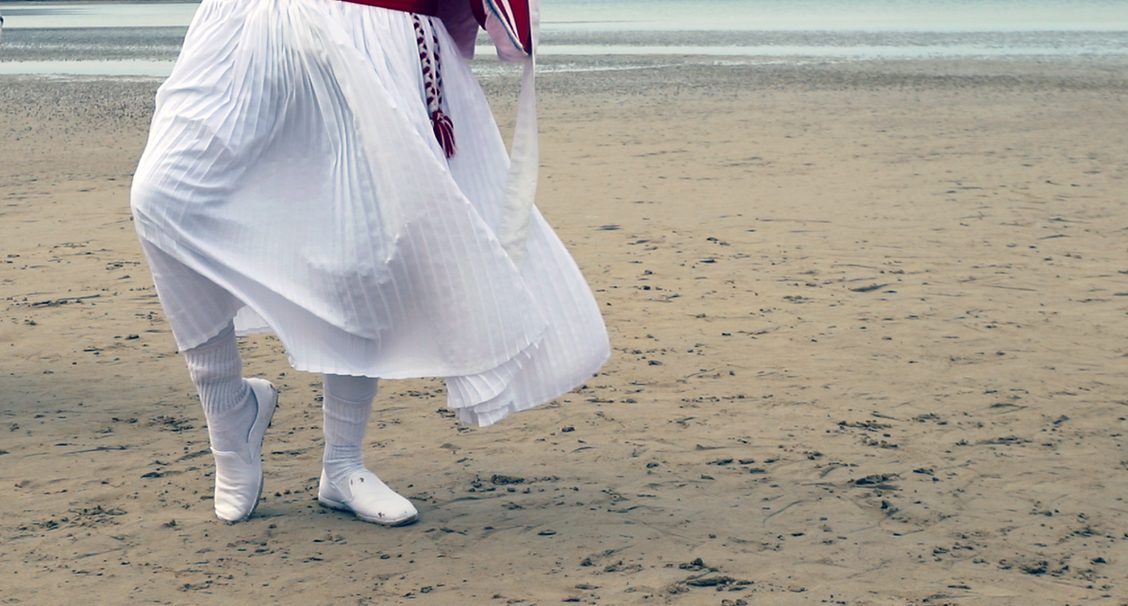 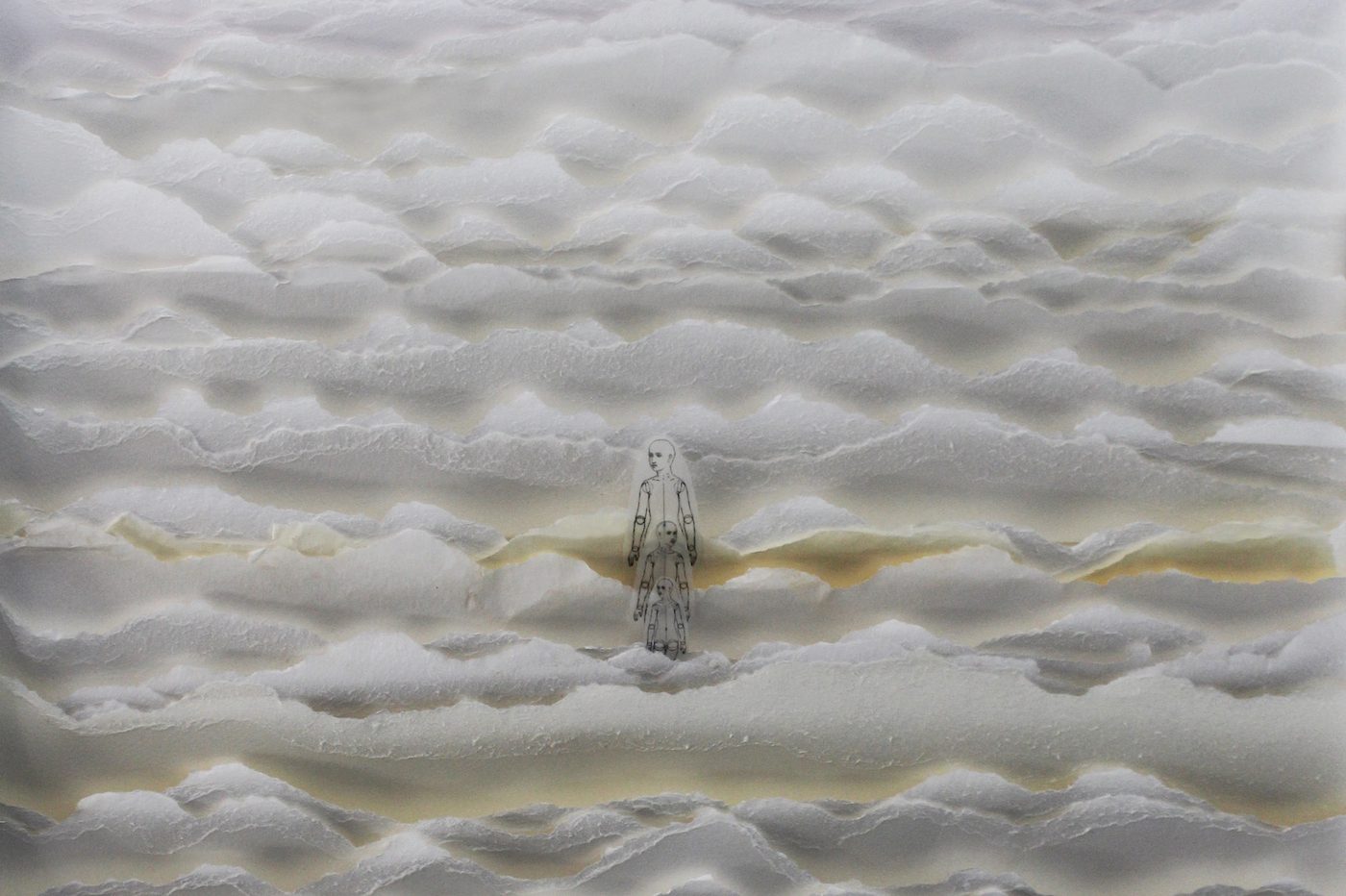 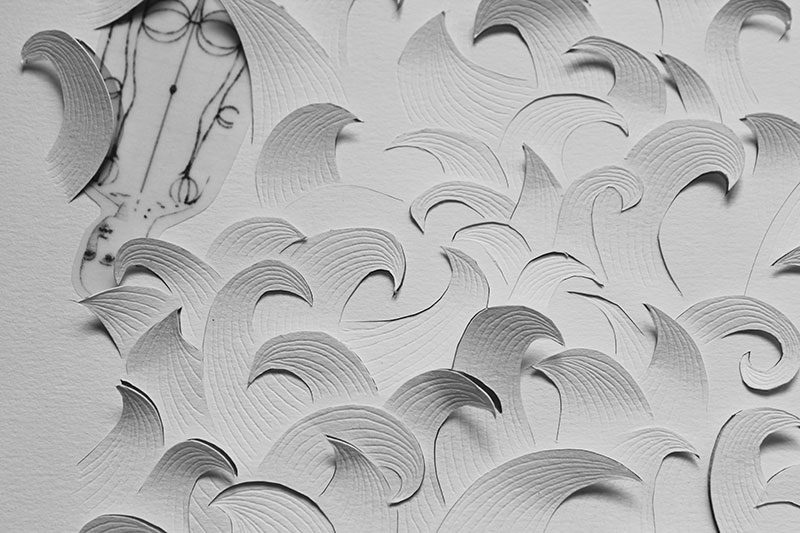 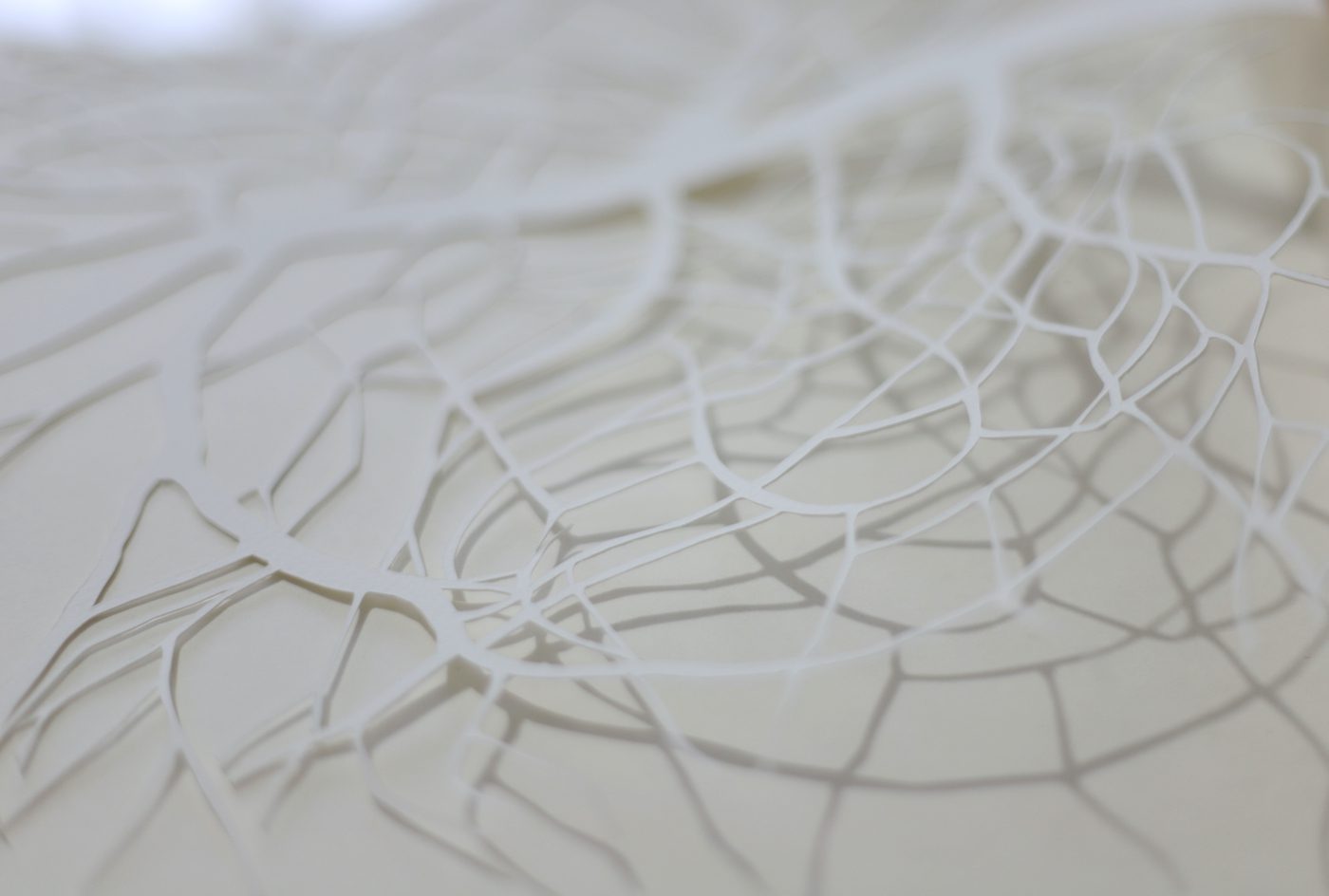 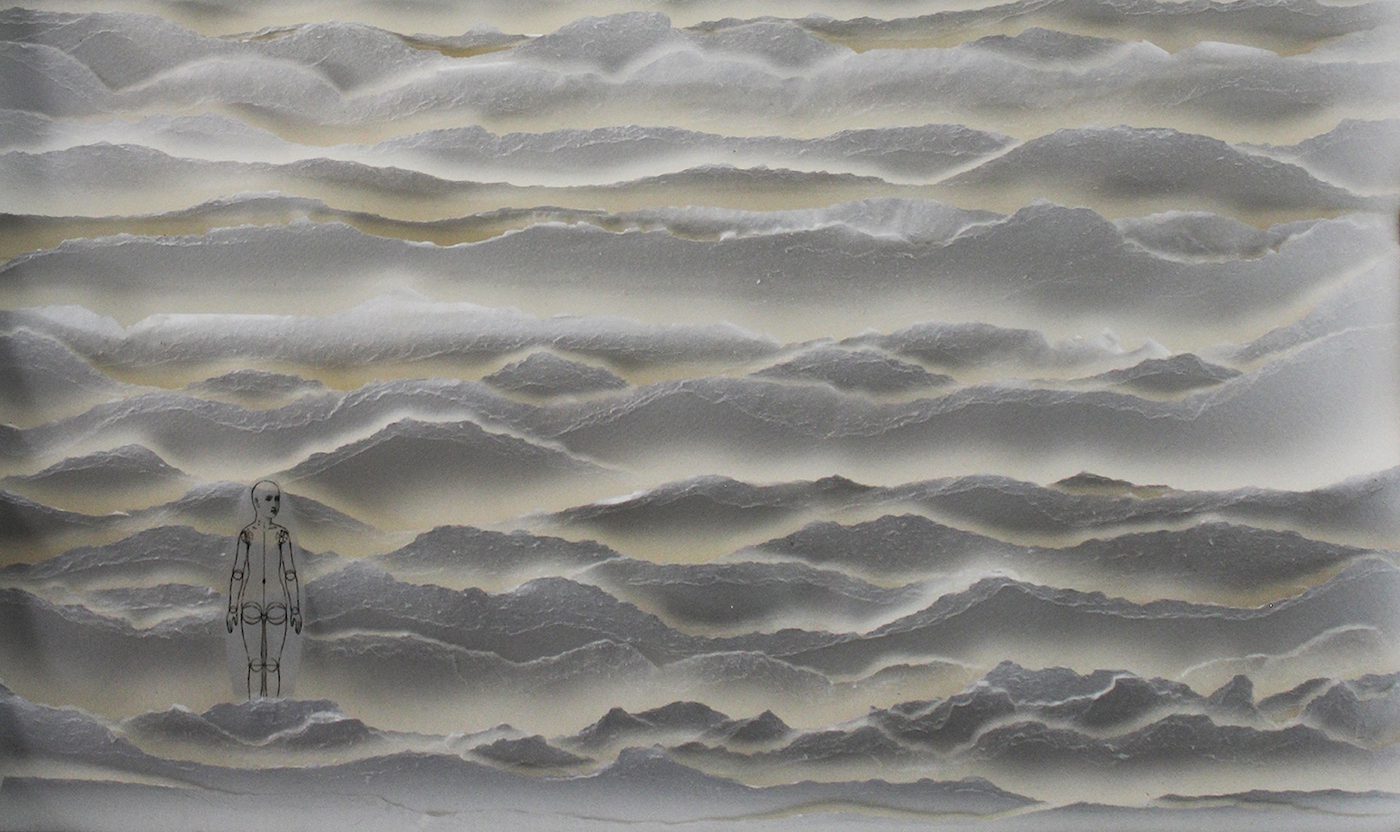 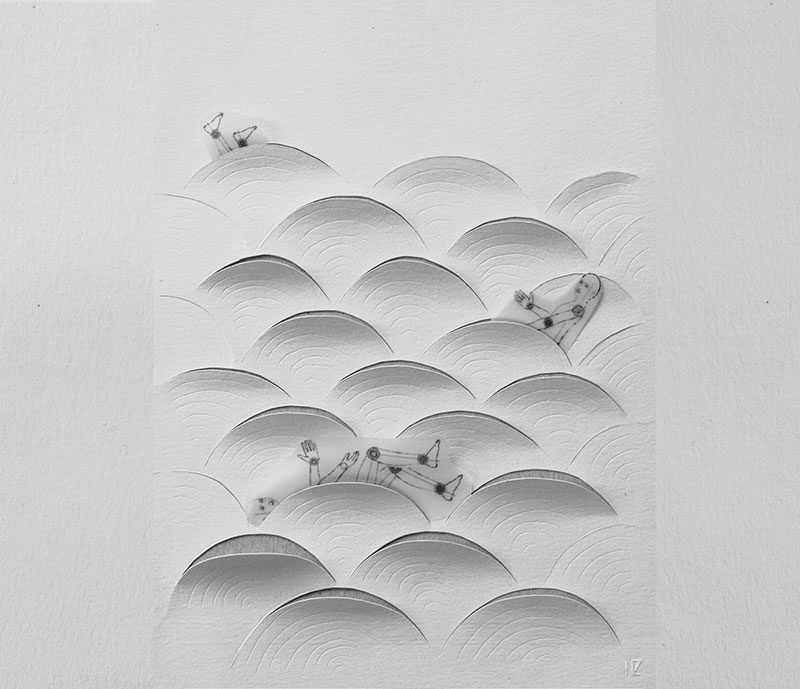 For her exhibition “Thanaya: entre plis et chemins” at Africa2020 Season Tunisian artist Najah Zarbout returned to her hometown in the Kerkennah archipelago. Imen Zarrouk spoke to the artist about the islands’ transformation from a migration point to a potential ecological misfortune.

Contemporary And: What you read has a great influence on your artistic vision and operates as a language giving structure to your works. What books and authors have inspired you in making this exhibition? How have they influenced your work and how is this translated into visual form?

Najah Zarbout: Works I’ve read that have remained etched in my mind—like Alice in Wonderland and Alice Through the Looking Glass—have been grafted onto my intellect and have now become an integral part of my psyche. I’ve always found Lewis Carroll fascinating—reading him, I would try to understand his intellectual process and the way in which he would structure his writings. The psychoanalytical dimension of his work, his “exemplary logical and linguistic formalism” make his work both captivating and unique.

For this exhibition, I read loads of articles in the press about the sociopolitical and ecological changes that Kerkennah, the place I was born, has been going through for a few years now. I have gone through all sorts of documents on illegal emigration by sea (or harga), which has increased dramatically in the archipelago in recent years. The absence of any control by the police and the proximity of Italian territory have made Kerkennah one of the focal points for hargain Tunisia. I was upset by the speed with which these changes have taken place and I realized that a large part of this archipelago, which is known for its authentic quality and natural resources, could disappear in a few years. I was driven by a sense of urgency about this, and so I decided to develop an exhibition around Kerkennah.

C&: Where do the paths mentioned in the exhibition’s title “Thanaya: entre plis et chemins” lead? Toward a promised land that has been dreamed of and idealized? Or do they mark a “new migration” that does not consist in “leaving familiar soil, but in realizing that one has been abandoned by one’s own land” (Bruno Latour)?

NZ: Recently I started going with my father on his visits to Kerkennah, and as we passed through areas we hadn’t visited for ages, we noticed they had become arid, where in the past they’d been covered in palm trees. The sea is gaining ground and will certainly end up engulfing a good deal of the land there.

As well as invoking the paths through this archipelago—paths I try to fix in place within myself in an attempt to slow down their constant mutation—the title of the exhibition also alludes to the Deleuzian rhizome, a concept that has featured in my practice since 2014 and characterizes my relationship with Kerkennah and my perception of the complex links between its different islands.

We live under the illusion that we are making progress along paths leading to familiar and safe destinations, even as we spin around on ourselves like dervishes. This idea of terra firma is illusory, and these paths lead nowhere …

C&: The use of minimalism and repetition imbues your works with a semblance of harmony that is disrupted by the cuts lacerating the paper’s virgin whiteness. What relationship do you have with the material, and what lies hidden beneath these folds and lesions?

NZ: When I started out, I would work very spontaneously; now I spend a lot of time thinking before I move into action. I’ve realized that art is everywhere—we are surrounded by works that are crying out to be seen and our role as artists is to help them come to expression.

I’ve always had a personal affinity for paper, which I used to affix to my canvases before it became an inevitability, when I completely abandoned painting to allow my work to determine the approach and materials I use. There are things that I keep stifled, that thrash about and jostle the paper in an almost random attempt to damage it as a way to break free, but it is me that chooses to operate on the paper to calm my anxieties and maintain control. This repetitive practice is my way of imitating the movement of nature, which I see as the sole embodiment of the divine.

C&: Starting with the second drawing of the series under the waves, a mechanical body appears that seems to float or walk on the water but which, as the drawings progress, loses its illusory balance and is consumed by the waves. What does this flat body without organs symbolize? Does it tell the story of a shipwreck, the shipwreck of something universal that must be re-envisioned in order for it not to go under and sink to the darkest depths of an ecological abyss?

NZ: This figure made its first appearance in my artistic universe in 2014, with Marionnette céleste, Autoportrait, a work that represented a real watershed in my understanding and my way of working. Like Alice, whom the Red Queen attempts to dominate, this puppet is a kind of alter ego that I dreamed up after realizing I was being manipulated. I was depressed for a time until I got a grip and told myself that we are all somebody’s puppets, our strings pulled by political parties, by the media, and so on.

We are a long way here from classical representations of the body with their focus on harmony, sensuality, and a form of beauty that is absolute and idealized. I find myself in the Deleuzian body without organs, a body that represents “the unproductive, the sterile, the unengendered, the unconsumable” and which better describes our tormented existence and “the unbearable lightness of being.”

C&: What are the things you hope people will notice in Thanaya : entre plis et chemins, and what impact would you like this exhibition to have on their awareness and perception of the world?

NZ: I’d like them to be able to see something of Kerkennah in the exhibition, even if they’ve never visited the islands, and I hope it will kindle a certain degree of ecological awareness in them. This is the only world we have, and we need to protect it.

Imen Zarrouk is an independent writer and curator, she worked at the Kamel Lazaar Foundation and was part of the team that launched the B7L9 one of the first independent art spaces in Tunis, Tunisia.

The exhibition Thanaya: Between Folds and Paths as part of Africa2020 Season is on view until 30 June 2021 at FRAC Corse – Collective de Corse in Corte, France.