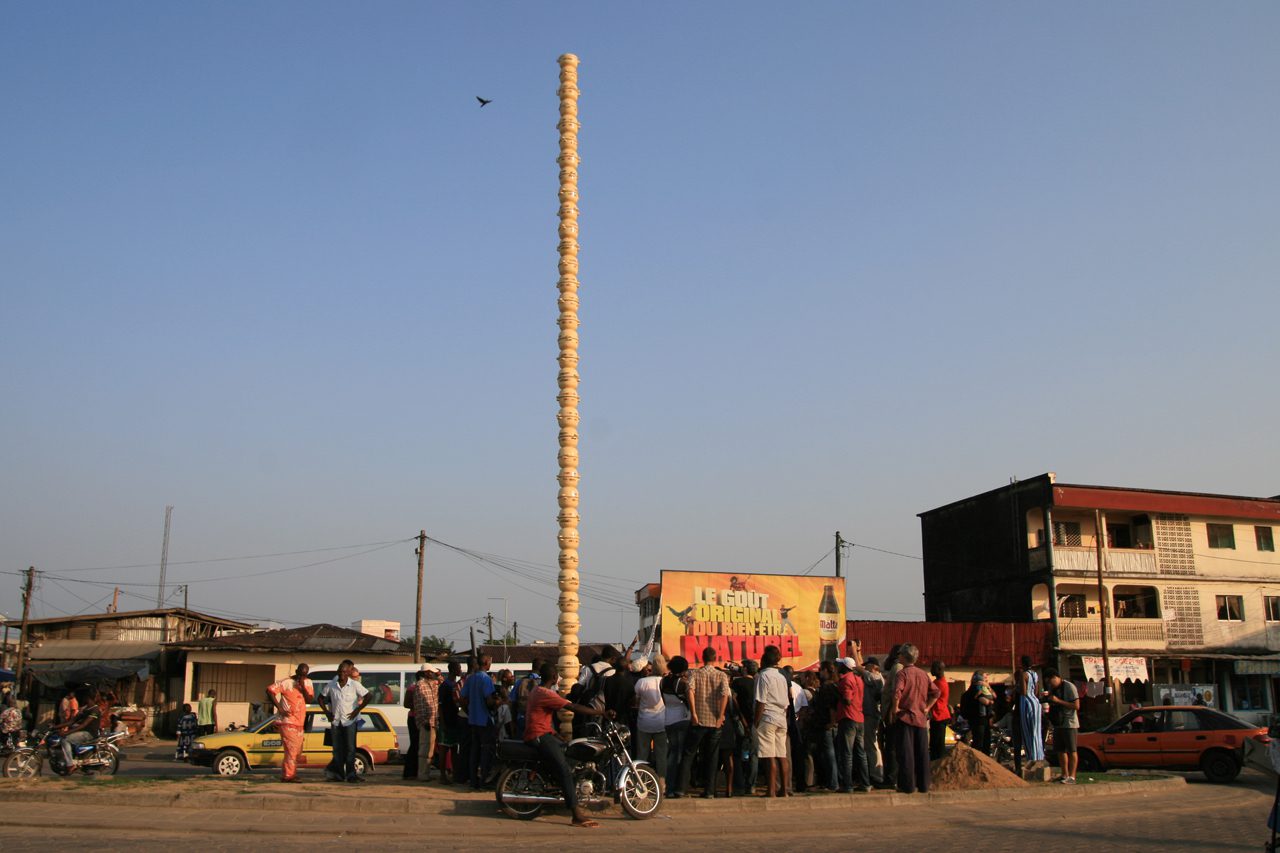 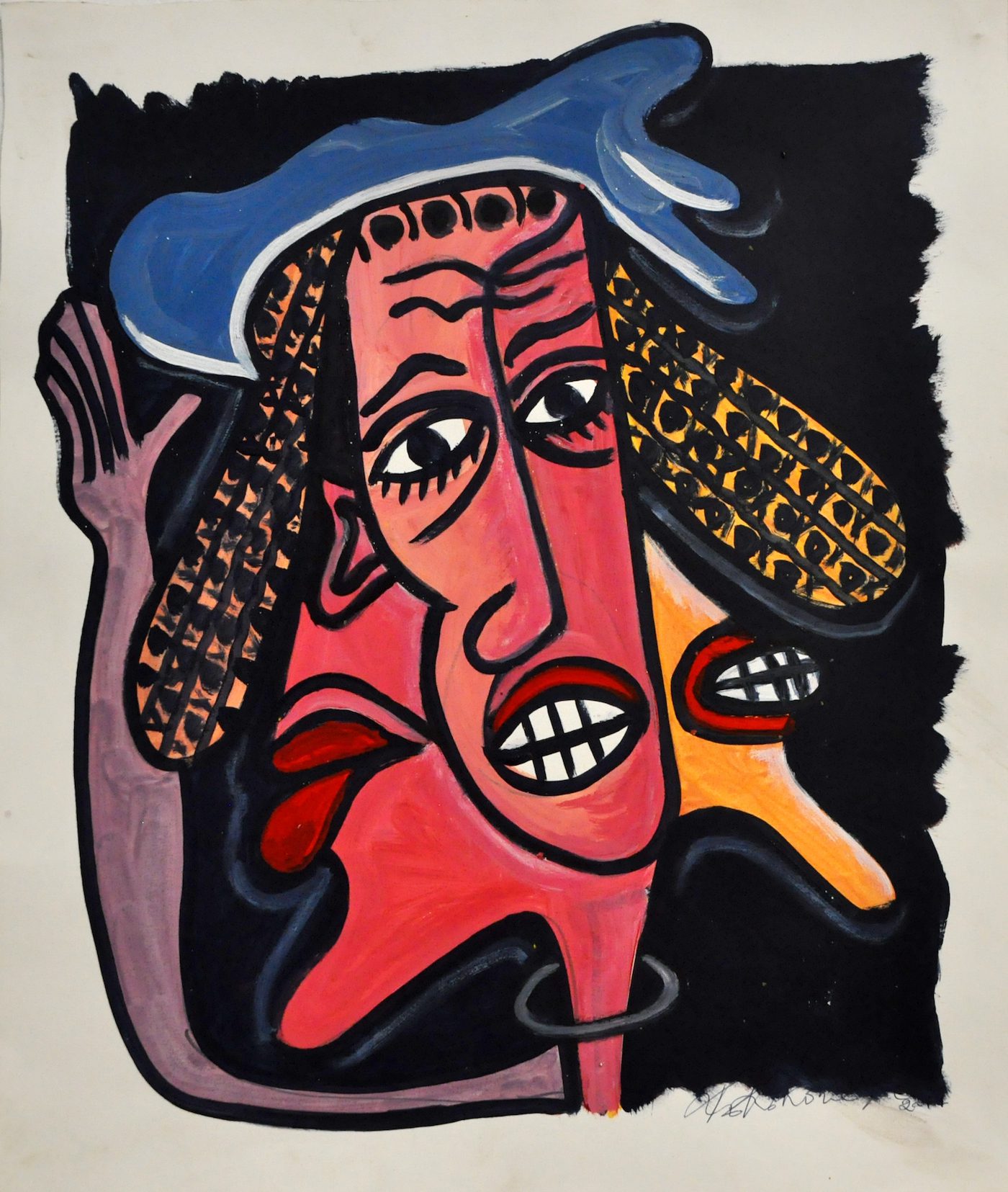 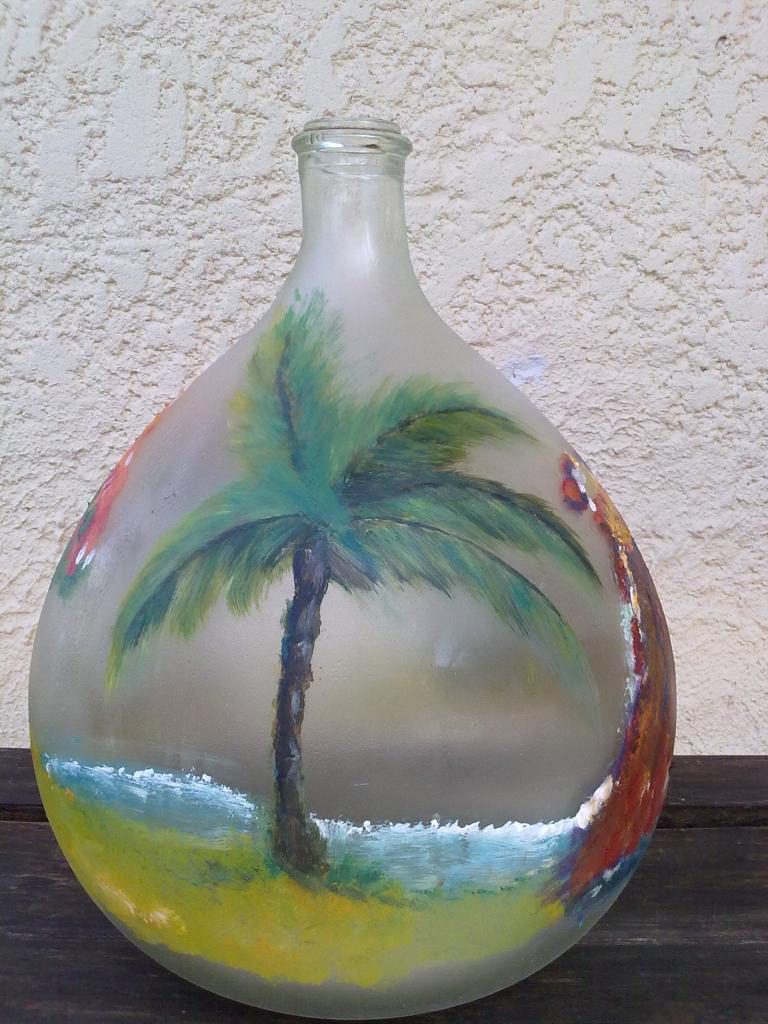 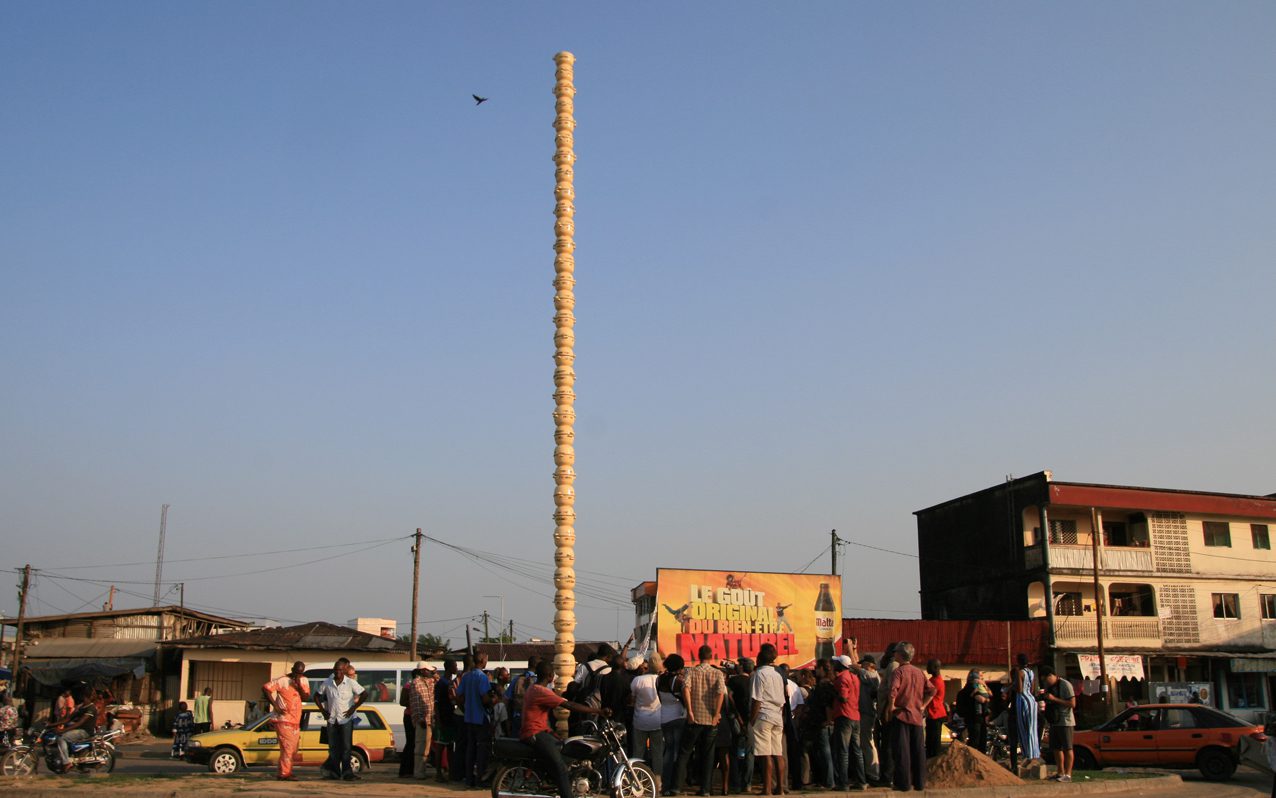 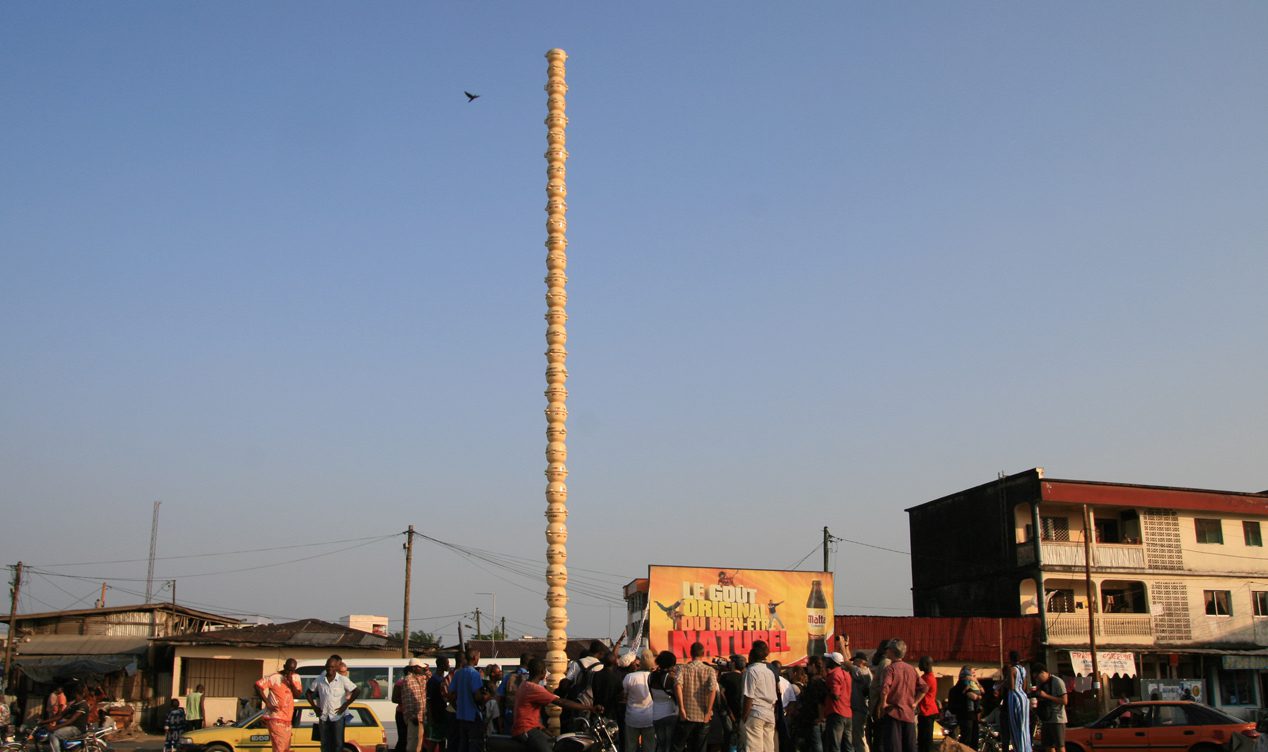 Curator Yves Makongo looks into whether Douala has become the national center of artistic creation, given the city’s historic role as the country's main port

By virtue of its geostrategic position, the port city of Douala became the principal gateway in and out of Cameroon between the late fourteenth and early fifteenth century. Benefiting from this situation, the city exerted a pull on the country’s inland population, which is the reason for its great cultural diversity today. The first contacts with Westerners also fostered the introduction of easel painting as a means of artistic expression. I will now explore the evolution of art and the different associative and institutional dynamics that have contributed to the establishment of a rich and fertile artistic scene — from the first self- taught painters to Young Turks coming out of the modern fine arts institutes, via groups of artists and diverse private organizations.

THE PERIOD OF FIGURATIVE PAINTING

The easel painting introduced by German settlers in 1900 and continued in the 1920s by the French spawned a generation of highly prolific artists. The great master Lobè Lobè Rameau (who died in 1988), a painter and musician famed for his guitar playing, would be one of several artists to contribute to the emergence of a musical genre from the Sawa coastal area — the Makossa style, which went on to become internationally popular in the 1950s. Alongside him were people like Martin Jombè I, Edimo Lazare, Massoma Jean, Seppou Jacques, Eyidi Ngimè, Mbongolo Paul, Ngimè Joseph and Berville Bernard. The work produced by most of the painters in this period was limited to a naive figurative record of their surroundings in the form of landscape scenes. The bridge across the Wouri was a very popular subject, along with everyday situations or life in the rural setting, rendered on all kinds of media, glass demijohns in particular. The canvases were more tinged with exoticism than based on real research and aesthetic rationale. The main customers for these works were generally found among Westerners who were passing through or had settled in the city.

THE PERIOD OF GROUPS AND MODERN ART

Starting in the 1970s, a new generation of artists came on the scene. They had links with Martin Djombè II, who was closely affiliated with the first generation of painters. This new group introduced a strong associative dynamic: inspired by Fr. Engelbert Mveng’s studio in Yaoundé — Art Nègre (1968) — Atelier Viking was founded in Douala in 1976. This acted as a veritable magnet and gave rise to impassioned reflections on a specifically African style, which sought to free itself from the aesthetic canons of Western art and the figurative mode of representation adopted by the pioneering artists of the 1940s. There followed, in turn, a number of different collectives and movements (Cercle Maduta, CAPLIT Collectif des Artistes Plasticiens du Littoral, Squat’art (1) etc.) with the artists Viking, Koko Komegne, Combattant Mboua Massok, Nya Delors, Atakoua, and some others who are no longer with us. The next generation formed by this group was enriched by a few artists from European schools and from Yaoundé (Joël Mpah Dooh, Goddy Leye).

THE PERIOD OF INSTITUTIONS AND PRIVATE INITIATIVES

After the smoldering “ghost town” years (1990–92), which involved a number of artists who have since gone over to politics (Combattant Mboua Massok, for example), we saw a revitalization of the artistic scene in Douala. Outside of the French Institute, where works of art were showcased, artists witnessed the launch in 1991 of the arts center doual’art — whose first large-scale event, doual’art Pop 93, showed a number of artists who would go on to forge a career for themselves — and in 1995 MAM, which was a true commercial gallery. These two organizations are still major influences today in the maturation of the aesthetic style and projects of Cameroonian artists as a whole. Alongside these organizations, many other private initiatives have seen the light of day, following in the footsteps of The Last Pictures Show by Catherine Pittet. The artists themselves have helped shape the contemporary art scene with exhibitions like Iconoclast Masters in 1996 featuring Goddy Leye, who gathered artists from the associations Kheops Club in Douala and Prim’art in Yaoundé (2). Leye would later found ArtBakery, which was to be one of the main centers of artistic creation in the Bonendale Village des arts. Cercle Kapsiki, an initiative started in 1998 by five artists (Blaise Bang, Salifou Lindou, Jules Wokam, Hervé Yamguen, and Hervé Youmbi), would interrogate the place and role of art in the urban space. In 1999, Jean-Christophe Lanquetin conceived the idea for the Scénographies Urbaines.

Its proximity to the centers of power has meant that the artistic scene in Yaoundé has found itself constrained; in Douala, by contrast, the city’s rebellious tendency ensured freedom of expression at an early stage. The other peculiarity of art in Douala is its presence in the urban fabric: public works of art have been produced that constitute a veritable open-air museum, with the majority of the pieces coming out of doual’art and its triennial festival SUD (Salon Urbain de Douala). This project has successfully staged works in the urban space by artists not only from Douala but also from Yaoundé and the international scene. To date, the city has more than twenty or so permanent works (3) on display and will be enriched by at least ten more at the end of SUD2017 (December 5–10, 2017).

Since 2010, various schools and other fine art institutes have opened in Cameroon. They are producing a new crop of young artists and art historians, who, for the most part, head straight for Douala and, we hope, will enrich the artistic scene and actively set to work mining the young history of Cameroonian art.

Yves Makongo is a young curator with a background in geography. He was a participant at Àsìkò Art school in Addis Ababa 2016 and Accra 2017. Since 2011 he has been artistic assistant and project manager at contemporary art center doual’art in Cameroon, where he lives and works.