Focus on the Human

A week in which to discover the visual arts in a new and original way. From December 5 to 10, 2017, the fourth edition of the Salon Urbain de Douala embarked on a quest to explore human rights. Artists from some ten countries converged on the economic capital of Cameroon. They unveiled their work in front of an audience that was both curious and skeptical.

How are we to locate the Human in this immense universe we call art? Can it find dignity and nobility in artistic designs executed in wood, stone, metal, or other materials? Some answers to these questions are supplied by the Salon Urbain de Douala (SUD).

This international gathering is organized by the Centre d’art contemporain doual’art and its instigator, Marilyn Douala Manga Bell. This year, the fourth edition of this triennial, which has become an unmissable event for the city of Douala (Cameroon’s economic capital), is focused on the rights of man. Its theme, “The Place of the Human,” takes a free, daring, up-to-the-moment look at the contempt with which life is increasingly viewed in our society. Abuse, slavery, prostitution … in whatever form it appears, a lack of respect for the value of human life is visible on a daily basis. 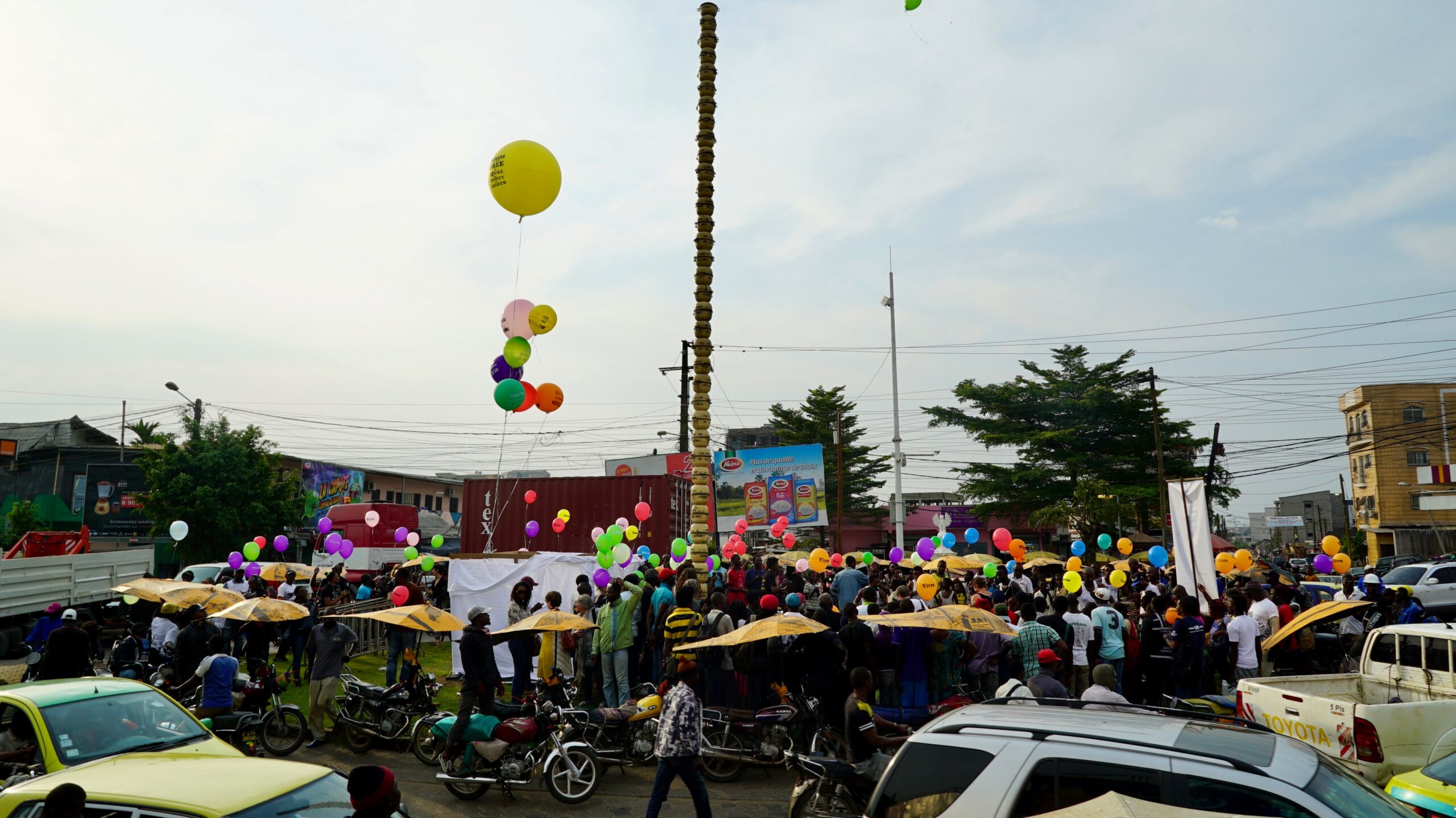 From December 5 to 10, 2017, sixteen artists from Africa, America, and Europe presented their vision of human relations. It was a concept that manifested in a variety of artistic forms, including architecture, painting, performance, sculpture, and video. In numerical terms, SUD 2017 went beyond these sixteen local and international artists. It also involved the unveiling of twenty-one works of art and artistic events, four discussion panels bringing together sixteen speakers, and an “off” program with at least ten documented projects. Not to mention the 150 international festival-goers who were expected, including members of the international press. The organizers were hoping that the festival would have an impact on twenty thousand people in Douala. Traffic intersections, schools, outlying districts, streets, and a great many more locations were taken over by visual art installations. Each had its own genius.

Les chaises de la dignité by Hervé Yamguen (Cameroon) constituted a profound reflection on the ideas enshrined in the Declaration of the Rights of the Child. Many of the performances were interactive with enthusiastic contributions from the public—mostly young people. In Living together by Emile Youmbi (Cameroun), passers-by were given balloons that they later released into the sky, symbolizing the liberation of the spirit and of thought. The same idea appeared in Dream Pressure Tester produced by visual artists Stephen Hobbs and Marcus Neustetter (South Africa). Except that this time, the balloons, which were inscribed with the dreams of Douala residents, flew off separately and then regrouped. This demonstrated the power that can come out of a communal project. 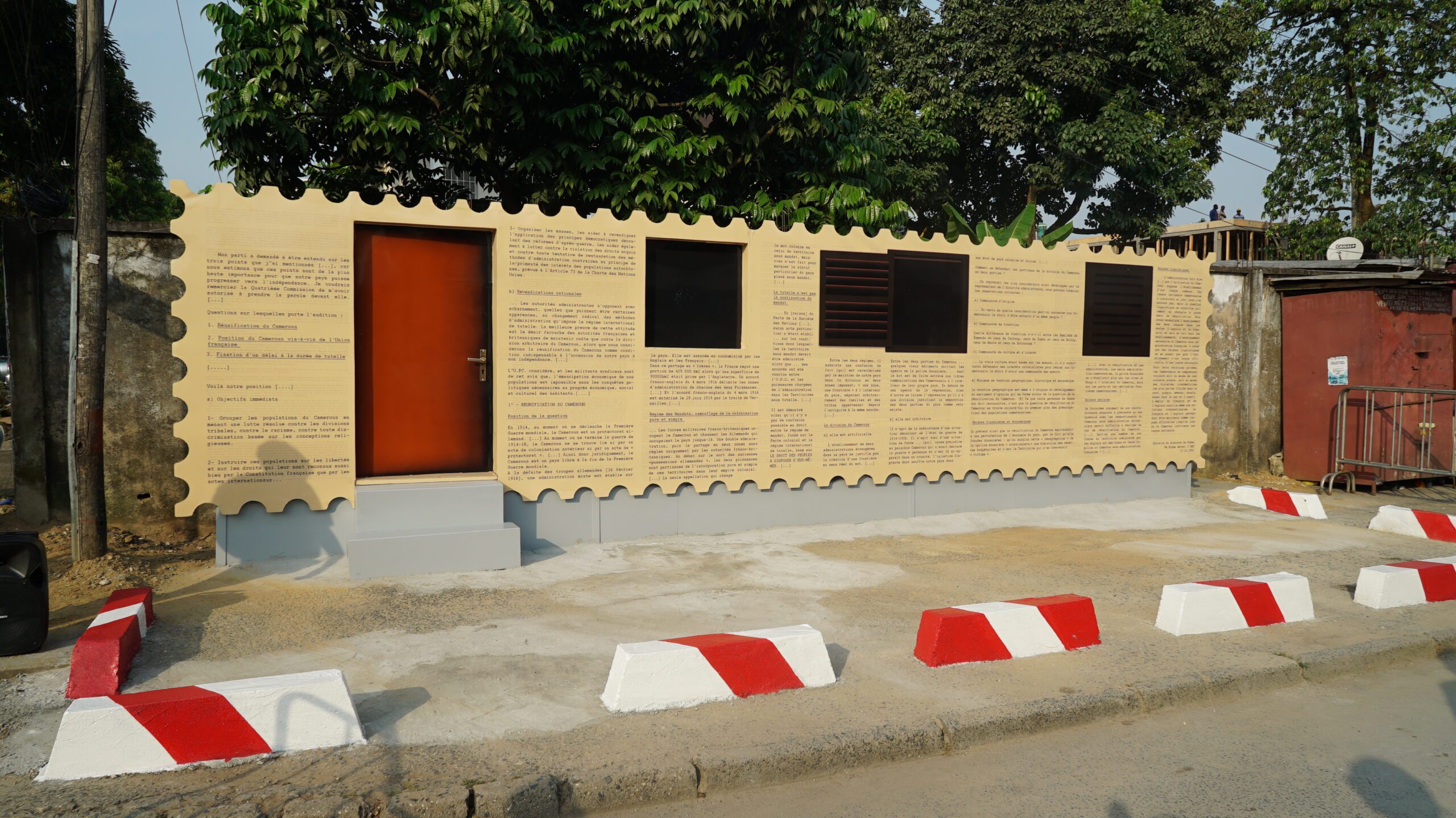 Douala’s infrastructure was called into play. Justin Ebanda (Cameroon) marked a bus shelter with sentences, words, and the names of famous figures in Cameroonian history. Hervé Youmbi (Cameroon) made use of road signs, on which he wrote the articles of the Universal Declaration of Human Rights in a popular slang created and spoken by the youth generation. It is a mix of English, French, and local languages. Or, to give another example, onlookers gradually deciphered the words of a poem written on the sidewalk by the Franco-Colombian Iván Argote.

These projects answer several purposes for the Centre d’art contemporain doual’art, which was founded in 1991, one of which is to stimulate debate about art. The temporary installation by French artist Sylvie Blocher is entitled Bien que je n’en aie pas le droit, je vous présente mes excuses. In it, she apologizes to Cameroonians for all the suffering caused by French colonization. In many cases, her apology was not appreciated or not understood. There were a flurry of different reactions, both negative and positive. 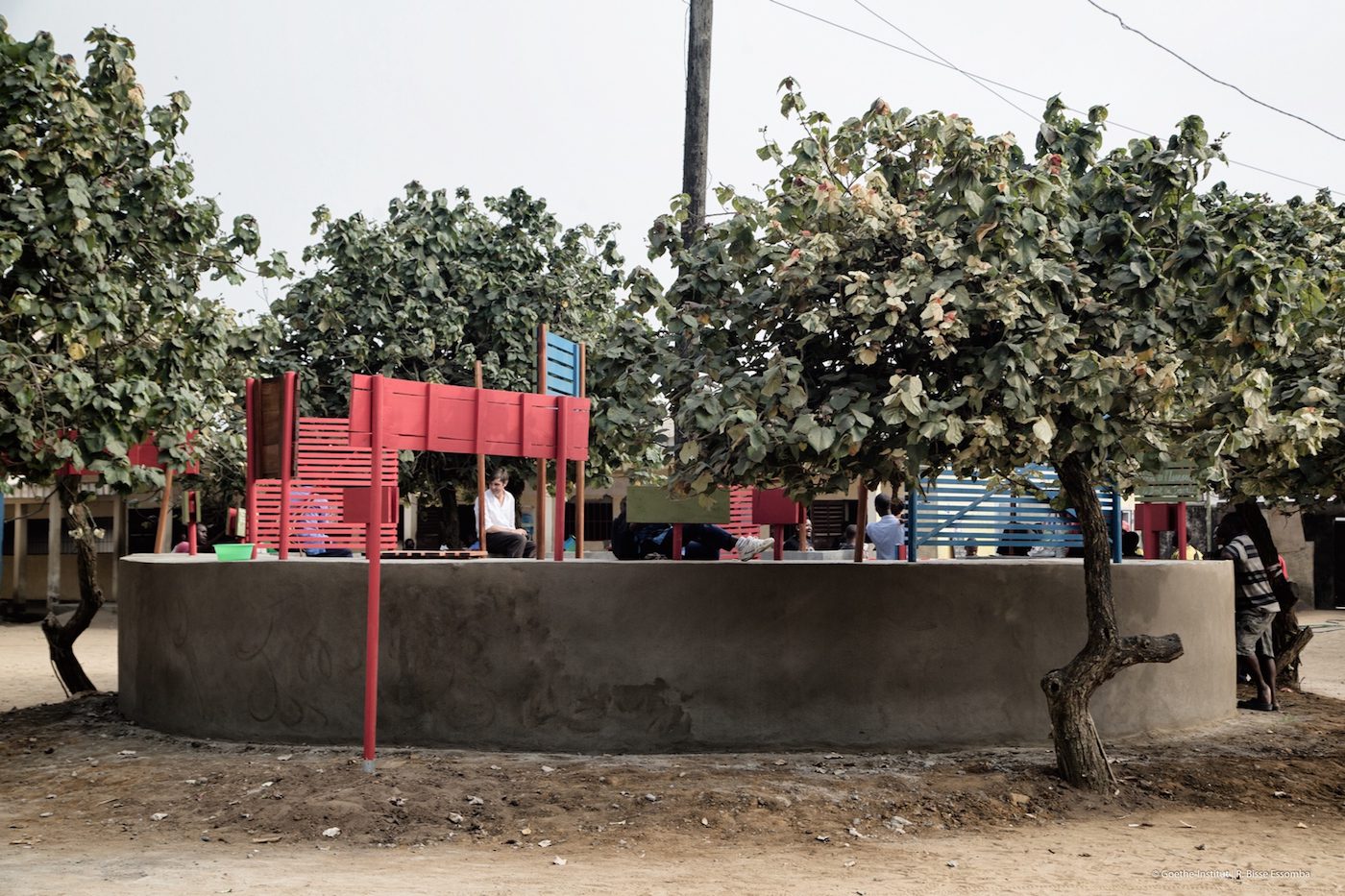 Thanks to SUD, the city of Douala has taken on some public art projects, as various monuments are unveiled or renovated. One example of this is La Nouvelle Liberté, an imposing metal sculpture by Cameroonian visual artist Joseph-Francis Sumégné. Installed at a famous intersection in Douala, it was given a new look for SUD 2007. Ordinary, uninteresting public spaces host unique pieces or are themselves transformed into artworks. This will be the case with Douala’s main post office. In 2018, The Burden, will be put on show, an aluminum installation that is around 10 meters in height. This work by Justine Gaga (Cameroon) was previewed during the most recent SUD with the help of a 3-D model.

All these innovations are SUD’s strength. “It is a real challenge for Douala to know how to honor this gift and at the same time preserve it,” admits Cécile Bourne-Farrell, general commissioner of the 2017 SUD festival. For her, “there is this desire to find the right words, the way to talk about everyday life, historical anchoring, and youth too.” Ten years after its inception, SUD clearly shows that its ambitions are still intact. SUD encourages dialogue through a process of artistic creation to foster the art of living together. It prompts Douala’s citizens to become familiar with art and have respect for the urban environment they live in.