Looking back, artist Glenn Ligon wonders whether Andy Warhol knew any ordinary African-Americans. Directing his telescope into Warhol’s orbit, he finds legends such as Michael Jackson, Diana Ross and Jean-Michel Basquiat but no average Black people. So he readjusts his telescope to find Black “superstars” from Warhol’s Factory. Between Edie Sedgwick, Nico and many more, he finds a single Black woman: Dorothy Dean. She starred in several Warhol films and was undoubtedly glamorous, Ligon says—though he knows of no one who would call her a “superstar.”

Against this backdrop, Ligon quotes Warhol’s statement during a press conference in Ferrara, a city in Northern Italy. It is 1975, and Warhol is opening his exhibition “Ladies and Gentlemen” in the Palazzo dei Diamanti. All of the 105 works exhibited there—some of them large-format—show portraits of 14 different drag queens or transwomen. The persons portrayed are either African-Americans or People of Color from Lower Manhattan. Warhol mounted their Polaroid photographs as silkscreens and additionally hand-painted these enlarged photos with richly luminous, sometimes thickly applied colors. As Warhol told the journalists present, he frequently met the persons portrayed in New York; they were his friends, he said. Ligon casts doubts on the truth of this statement and is confirmed by the comprehensive catalogue raisonné of Warhol’s works. Warhol portrays the sitters like Hollywood icons, but withholds their names. They are not even mentioned in the titles of Warhols’s paintings of them, unlike was the case, for example, with the Marilyn Monroe series (although in that case the fame of the person portrayed would presumably have made redundant any particular titling).

While Warhol claims to have had a friendship with the sitters, he simultaneously anonymizes them. Such contradictions are repeated at all stages of the development of “Ladies and Gentlemen,” from the creation of the series to its circulation and on to its reappraisal in museums after Warhol’s death. They articulate structural discrimination within the art world as well as racism within the queer scene. 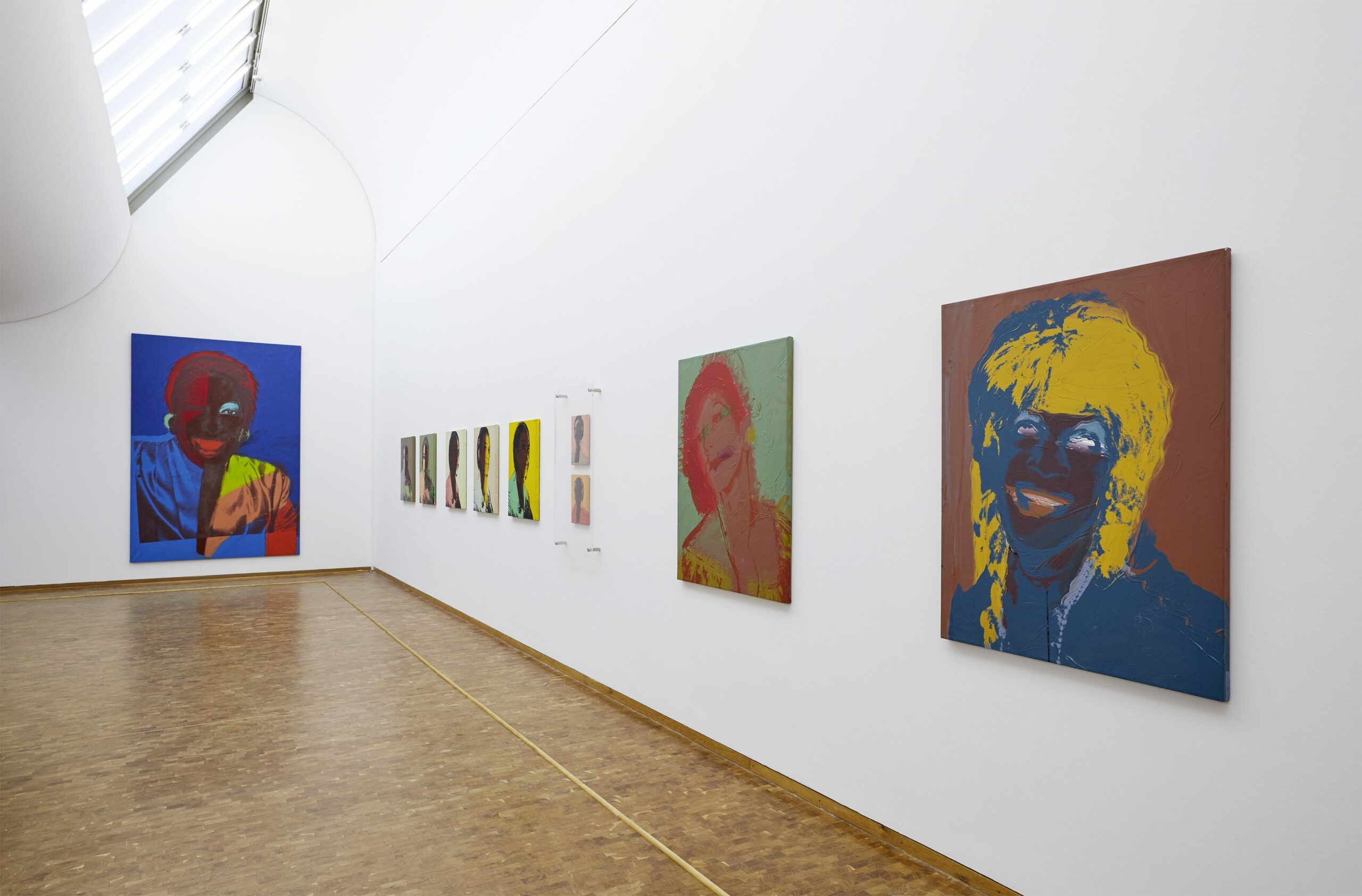 In 1974, the art dealer Luciano Anselmino from Turin commissioned Warhol with this series. Its title, “Ladies and Gentlemen,” with its associations of the theater and show business, also originated from Anselmino. Anselmino and Warhol had different motivations for choosing allegedly fameless drag queens and transwomen (they used the now uncommon term “transvestite”). Oddly enough, Anselmino believed that such a form of anonymity was in keeping with Warhol’s original work ethic. Yet neither the Warhol “superstars” nor his earlier works, such as the Brillo boxes, had managed to do without a (brand) name—whether as a subject or in the title of the work. Warhol, on the other hand, could not or did not like to work with the trans celebrities from the Factory. On the one hand, because Candy Darling had died at the beginning of the same year, and on the other, because he was annoyed by Jackie Curtis and Holly Woodlawn wanting a share of the profits he made using their images.

Warhol then commissioned three of his assistants–whom he handen $ 75 each–to recruit drag queens and transwomen himself did not know. In order to keep the fees of the persons cast somewhat under control, Warhol asked his assistants to leave his name unmentioned to the potential models. Depending on the length of their session, he paid the 14 sitters a one-time fee of either 50 or 100 dollars. By way of comparison: with the entire commission of 105 pictures, Warhol earned around 1,000,000 dollars, which means that he gave the models a share in his income of around 0.01% each. Yet this calculation is not even close to complete: among all the series in Warhol’s oeuvre, “Ladies and Gentlemen” ranks as one of the most extensive. It eventually comprised 268 paintings, about 65 drawings and collages, and an edition of 10 prints. It was the anonymity of the sitters that made “Ladies and Gentlemen” a particularly lucrative deal for Warhol. If the models, however, were hoping for “Factory surplus value” for their efforts, this hope was not fulfilled. Many of them would spend their entire lives in precarious conditions. Warhol thus not only reproduced the value-related distinction between the “superstars” from his Factory and the outermost periphery of entertainment culture; he also knew how to profit unilaterally from the ruthless economical exploitation mechanisms of the market, which are operating, then as now, along divisions of race and class.

Among the models Warhol held in such poisoned esteem—promising them fame while disowning them of their own image—were revolutionary greats from the 1969 Stonewall uprising such as Marsha P. Johnson. Their misrecognition as “anonymous” models reveals the extent of Warhol’s ignorance. This touches one of the sore spots of the Stonewall historical narrative: for decades, its representation and analyses failed to name the ethnicity of the insurgents and thus rendered them invisible. With this misrepresentation, the white queer community deprived figures such as Marsha P. Johnson of an adequate recognition for their historical contribution to gay liberation. At the same time, the white historical narrative about Stonewall separated the uprising from the ethnic conflicts that had characterized the 1960s, from the civil rights movement struggling against both racist police violence and bigoted press coverage, and which had politicized Marsha P. Johnson, among many others. Along with Sylvia Rivera, another trans great from the Stonewall uprising and a frontline fighter, she had been among the leaders of the Gay Liberation Movement. Together, they had founded the group STAR (Street Transvestite Action Revolutionaries) in 1970, which provided shelter for the most vulnerable group of homeless transgender youth and would prove groundbreaking in retrospect. Out of necessity, many of these youths sought to earn money through sex work.

The fact that Andy Warhol withheld Marsha P. Johnson’s name in “Ladies and Gentlemen” perpetuates the depoliticization of heterosocial differences and antagonisms along the dividing lines of ethnicity and gender in the early days of the New York LGBT movement. In this context, it seems cynical when, today, Warhol the “legend” is popularly celebrated as a queer artist and thus, posthumously once again benefits from “Ladies and Gentlemen,” this time in the form of politically symbolic capital abstracted from a formative period in LGBT cultural history.

It was only around 45 years after being chosen for Warhol’s series that those portrayed in “Ladies and Gentlemen”—except for one person—could be assigned their names; where available, biographical information was now also provided. This was around the same time that, to cite just one example, art historian Denise Murrell uncovered the identity of the Black maid in Édouard Manet’s “Olympia” (1865). Until then, white art history had not had enough interest in Laure, as had been her first name (last name unknown). As a point in favor of Warhol’s work, one could point out that it did not take “Ladies and Gentlemen” 150 years to make such an attribution. But one may equally object that, despite the centuries of emancipatory struggle, the problematic effects of structural racism appear as noxious – and as uncannily timeless – as ever.

Gürsoy Doğtaş is an art historian at the University of Applied Arts (“Angewandte”) in Vienna. He started writing this article when he noticed that Vienna’s Mumok Museum, unlike other museums, did not mention the name of the sitter, Wilhelmina Ross, in the title of a painting from the “Ladies and Gentlemen” series – and that its cooperating partner QWIEN/Center for Queer History – did not even see a problem with this.