In the post-war period, many pioneering Black artists were largely neglected by the Western art world despite their significant contributions, and persevered regardless. In the last ten years Western institutions have been waking up to these artists’ legacies. They are finally curating first retrospectives – and of course the markets have followed suit. In this series we chart their careers, highlighting their artistic evolutions and motivations in relation to the world around them. Guyana-born British painter Frank Bowling has insisted we view his art beyond biography. Here, Liese Van Der Watt looks at the role that has played in how his art is perceived in the UK. 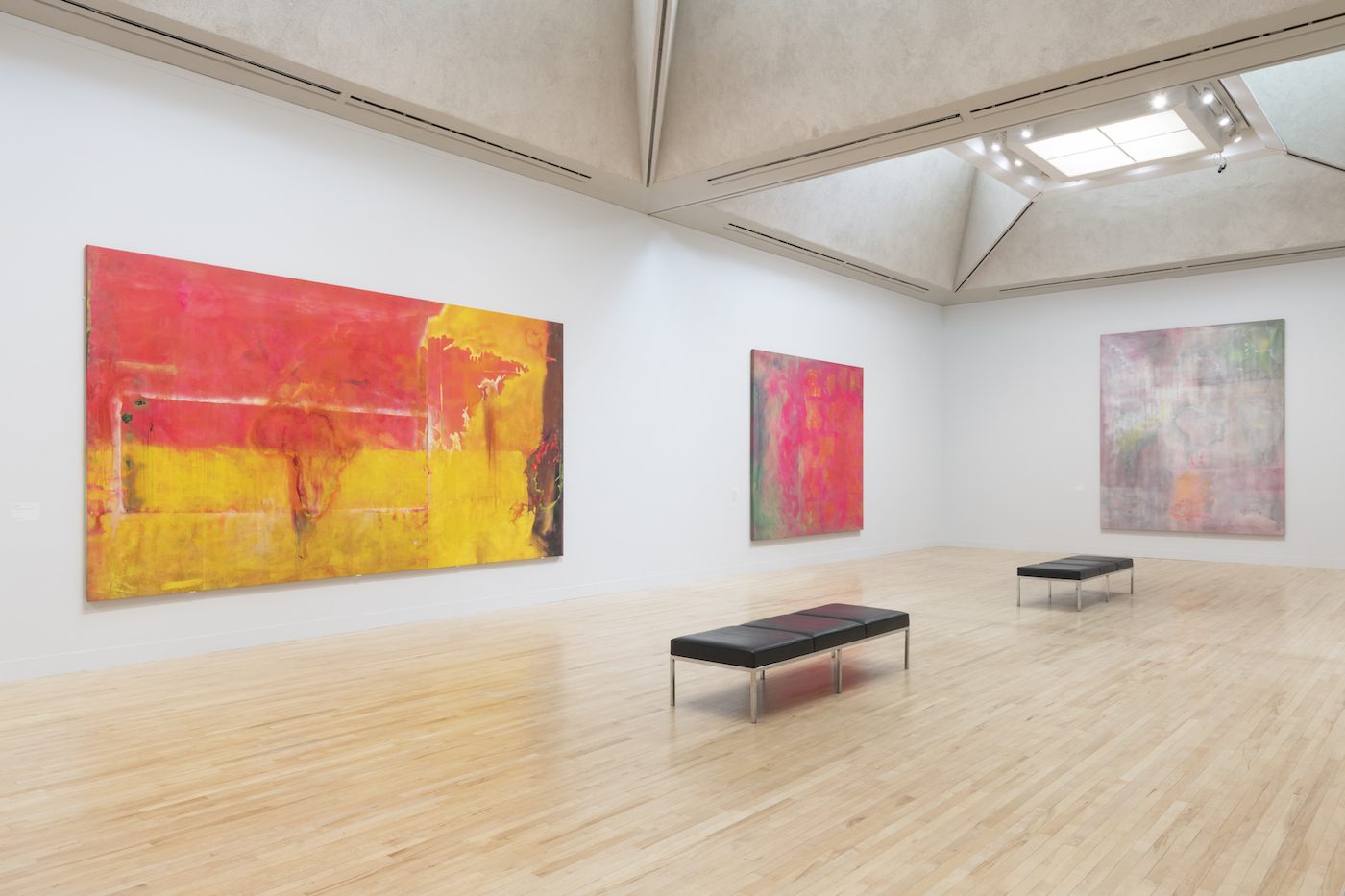 But last Saturday during a panel discussion at the Tate, scheduled to coincide with Bowling’s retrospective, Colombian artist Oscar Murillo expressed his frustration at what he termed a “disappointing” and token show. “I want to push for more diversity, much more understanding,” he told the Art Newspaper afterwards.[1] “I want more.” It seems Murillo’s main complaint was that “ultimately [the curators’] positions centred in Western conversation, and yes, you can factually claim that Bowling made his work here or in New York, that’s very evident, but the soul of his work is somewhere else.” Murillo is evidently referring to Bowling’s diasporic journey and complex biography: he came from Guyana to England in 1953 aged nineteen as part of the Windrush generation, studied at London’s Royal College of Art, moved to New York in 1966 where he worked as an art writer, teacher, and artist, and since the late 1970s lived between New York and London, ultimately settling a few blocks from Tate Britain, where he still lives and works today.

According to the Art Newspaper the curator, Elena Crippa, countered Murillo’s criticism that the show fails to address Bowling’s heritage by saying that “All his life – through his work and his writing – [Bowling] rejected being categorised or pinned down as being either a black artist belonging to the Windrush generation or anything else.” And Tate Britain’s director affirmed: “Frank Bowling has always refused to be defined by restrictive labels and has pursued forms of expression which are nuanced and open-ended. We worked closely with the artist throughout the process of making this major exhibition.” 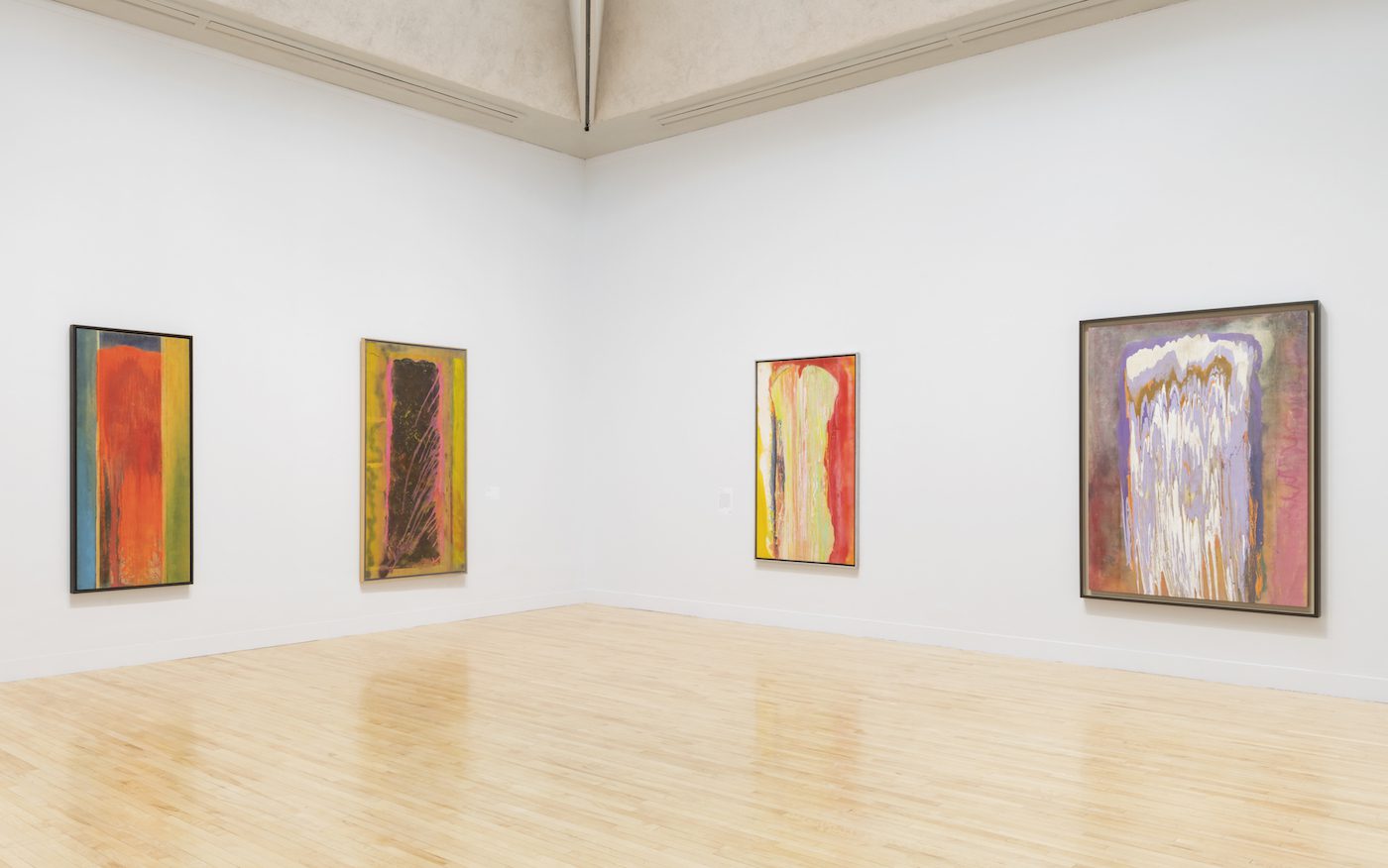 It is not difficult to recognize in this exchange of views the shape of a familiar debate that beleaguers the work of so many Black artists. Boxed in by references to race, geography, or heritage, many rightly balk at these seemingly intractable demarcations often reserved for artists of colour. And despite Tate’s efforts, the Art Newspaper mentioned that in a recent BBC interview Bowling said “he wanted the show to focus purely on the formal aspects of his work rather than his life story and race. ‘There was a new thing that was sprung on me about black and Asian art in England, I don’t know what black and Asian art is; I know what art is art.’”

I feel for Tate Britain, I really do. Stuck between calls for universality and specificity, between biography and viewer-invested readings, between content and form, between as it were the death of the artist and the birth of the viewer, it strikes me that this exhibition treads carefully, too carefully. One could easily dismiss Murillo’s curious statement that the work’s “soul” is somewhere else as a quasi-essentialist claim that there is something inaccessible to Western understanding going on these works. Yet I too feel frustration at the Tate’s show. I loved discovering Bowling’s work but found the show rushed, synoptic, safe. I, too, wanted more. Beyond the cursory explanation and somewhat dull chronology of where and when and how these works were made, I have a very real sense that they are in surplus of that context, a surplus derived from the composite accrual of Bowling’s identity as an artist, as well as from the very complexity of Bowling’s own thoughts on his artistic process. 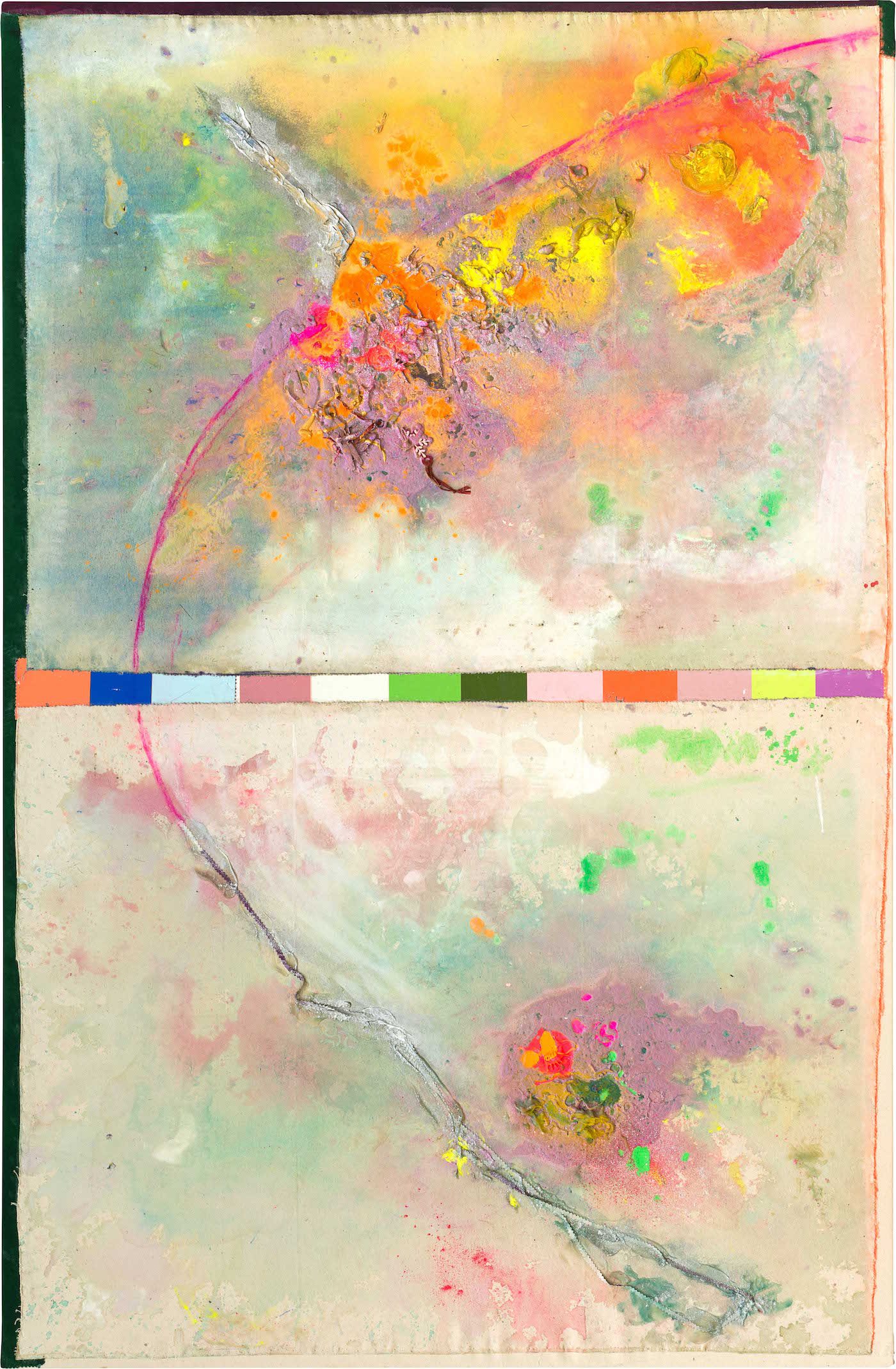 In a 1995 interview with Okwui Enwezor and Olu Oguibe, Bowling was very clear that his works emerged in the 1960s at the time of post-independence struggles in Africa; that when his contemporaries such as RB Kitaj and David Hockney were looking at front pages of newspapers and producing Pop art referencing sexuality and celebrities like Marilyn Monroe, he was also responding to newspaper photographs but those referencing post-coloniality – the post-independence of Kenya and Belgian Congo and Patrice Lumumba “dragged off … in a cage.”[2] Even if these works do not look like Pop art, but rather carry the type of expressionistic figuration associated with Francis Bacon, they were clearly referencing consumer culture and a worldview that spoke of particular affiliations. Early works also often referenced Guyana, particularly and repeatedly his mother’s store, silkscreened onto canvases and painted over to eventually appear dreamlike and distant, like the memory it must have become in his mind.

As he moved to New York and encountered US modernism, content started to recede and his interest in pure abstraction grew. Nevertheless, a rare solo show at the Whitney Museum of American Art in 1971 still referenced biography: His stunning “Map Paintings” centered the outlines of continents, mostly South America and Africa, in a dense layered visual field, abstraction hovering and receding in huge colorfields. From there Bowling turned to pouring paint onto his canvases, his interest becoming ever more formalist and technical. He experimented with ammonia and pearlescence, built up paint using acrylic gel, and captured light, skilfully testing opacity and luminosity. He incorporated fragments into his paint, investigating the medium itself seemingly at the expense of content. 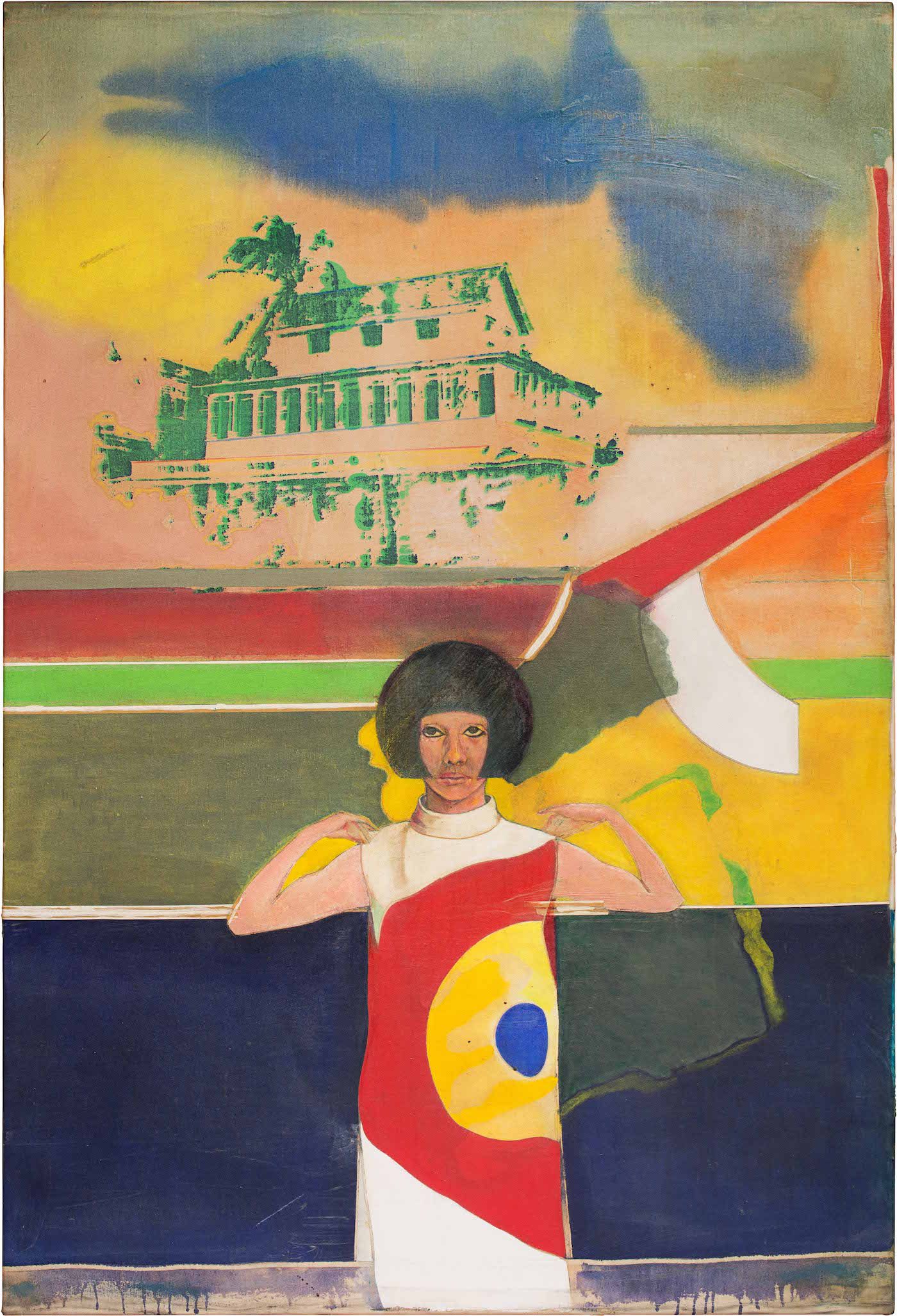 But of course content is everywhere. Not as blackness or whiteness, but as a life lived and accumulated within complex networks stretching from the Caribbean to the West, taking in cultural, social, and philosophical affiliations. These abstract works move, as Enwezor once put it, from metaphor to allegory. They are the result of Bowling’s transatlantic journeys, of conversations encountered on the way and questions asked around figuration and abstraction – especially in post-Civil Rights America, where many Black artists preferred figuration and challenged abstraction.

These accomplished, ambitious, heroic works demand that we ask why they are not in the canon of British art. Collecting policies of institutions should be exposed in order to explain how it is that Bowling was collected so rarely, until at least after 2003 when he was incorporated in Fault Lines, an exhibition of African and African Diasporic art at the Venice Biennale curated by Gilane Tawadros. A show such as the current one should also force us to examine the power relations that write our art histories, and to take the opportunity to tell histories differently and in more diverse voices.