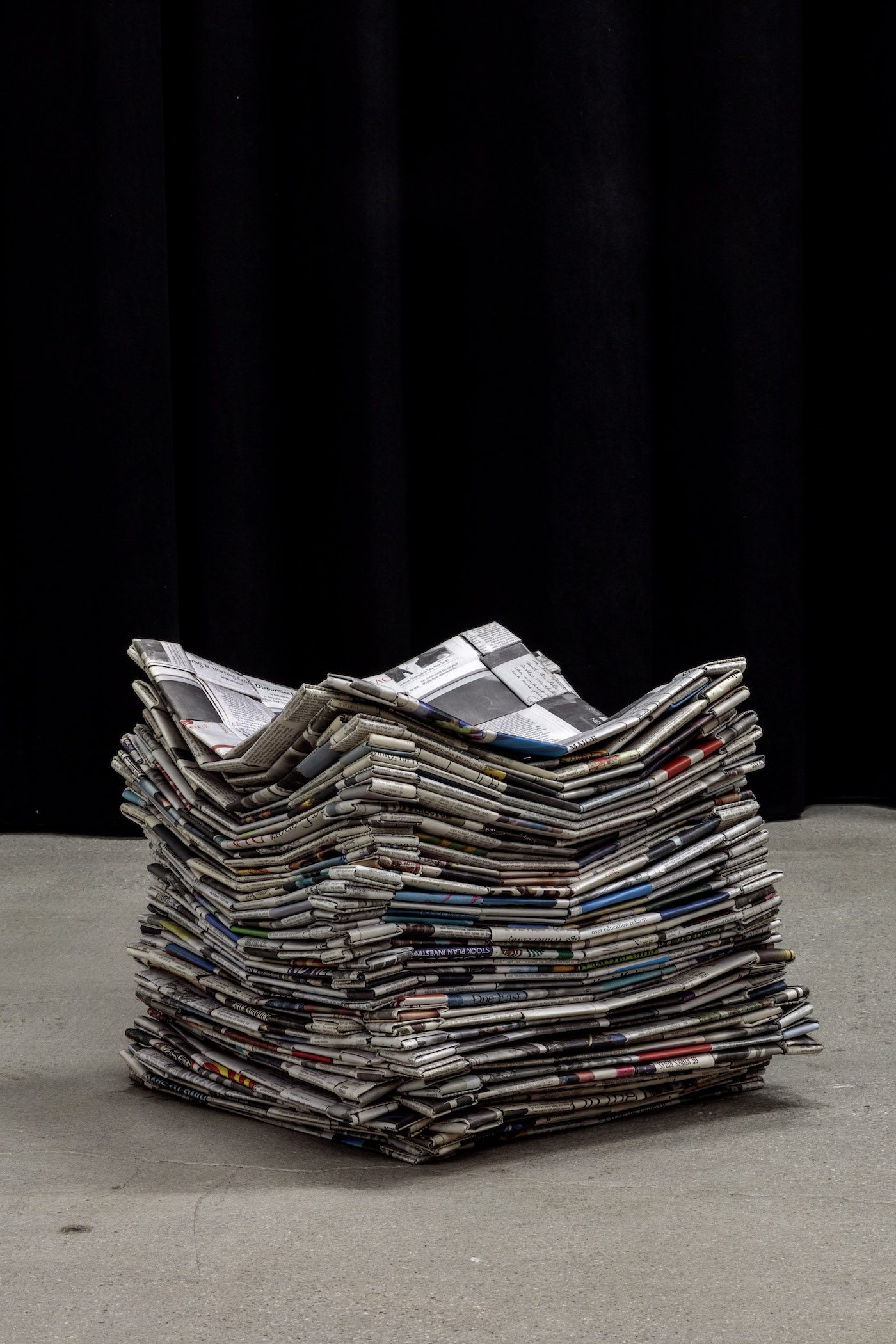 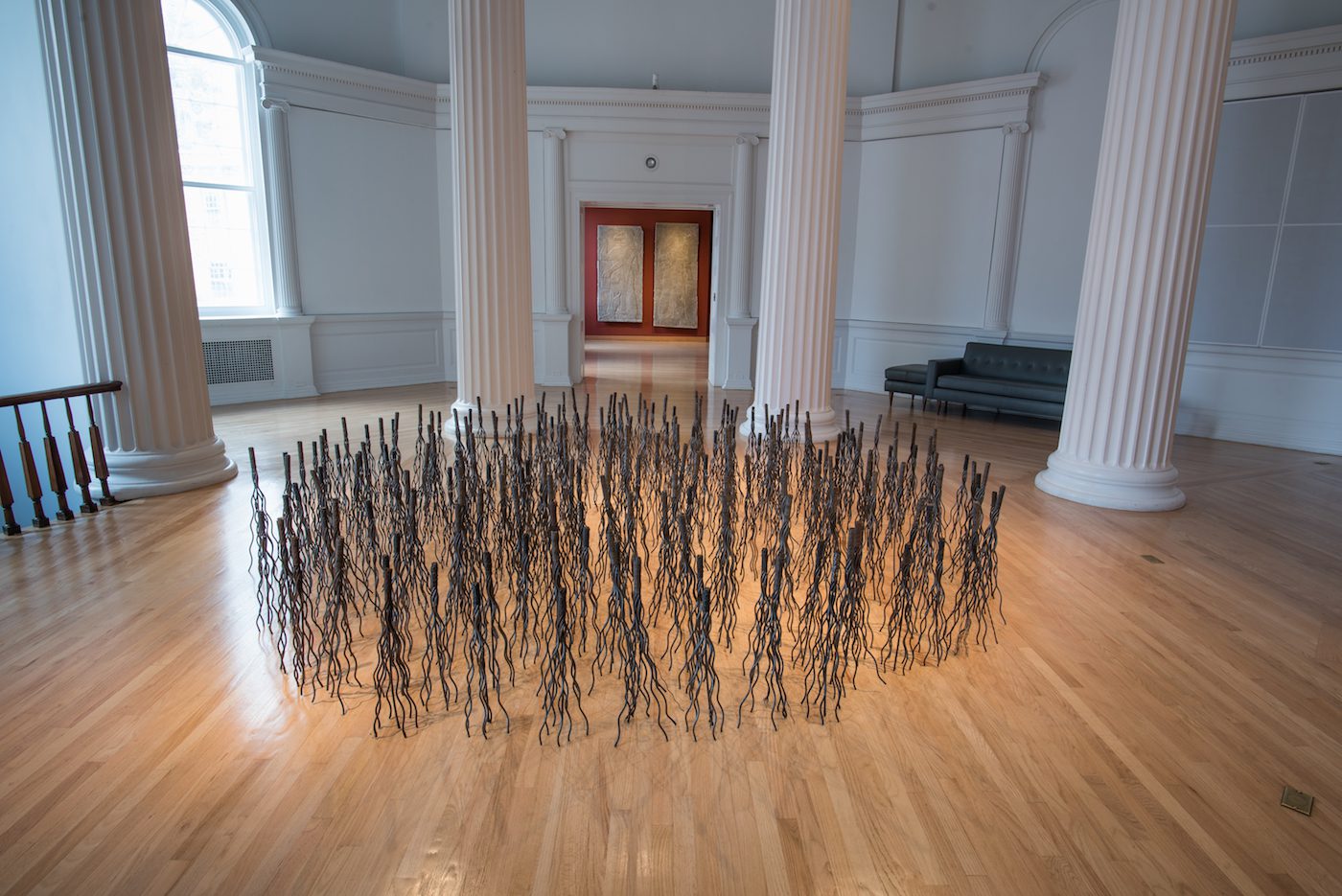 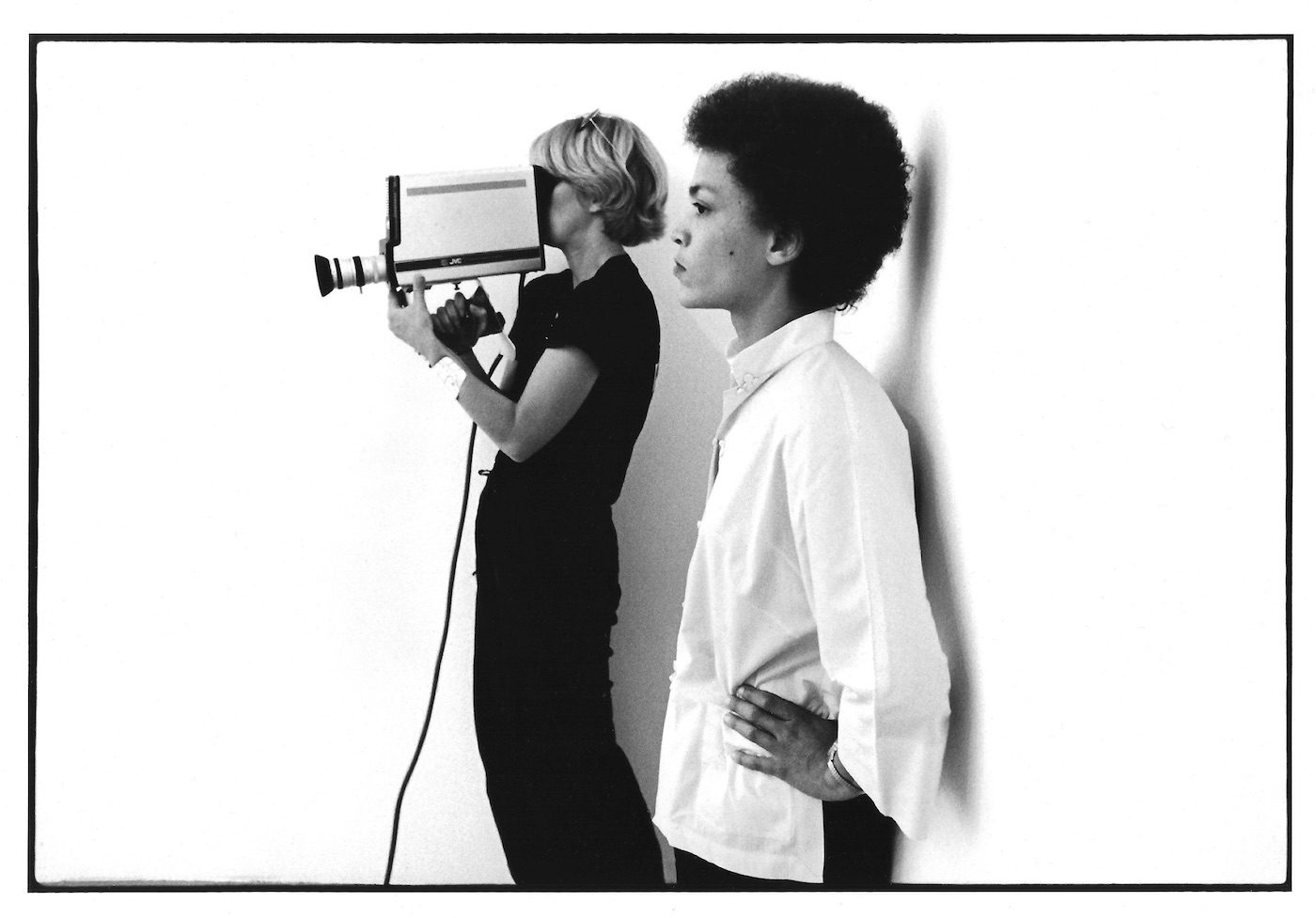 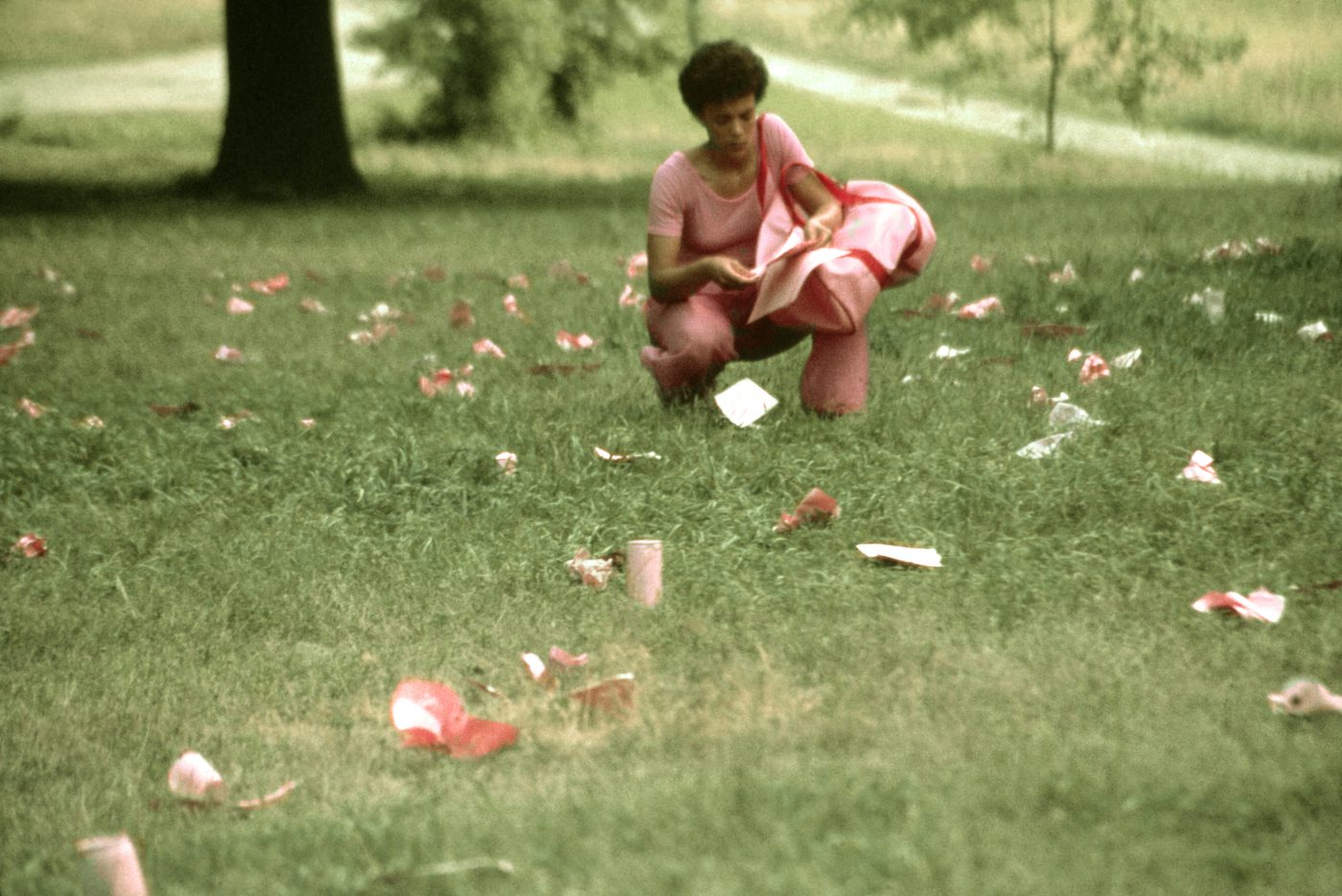 In the post-war period, many pioneering Black artists were largely neglected by the Western art world despite their significant contributions, and persevered regardless. In the last ten years Western institutions have been waking up to these artists’ legacies. They are finally curating first retrospectives – and of course the markets have followed suit. In this series we chart their careers, highlighting their artistic evolutions and motivations in relation to the world around them. Will Furtado speaks to Maren Hassinger ahead of her London solo exhibition to discuss protesting against lack of inclusion, the conditions for Black artists today, and refusing to teach business in art school.

Since the 1970s, pioneering American artist Maren Hassinger has worked across multiple mediums including sculpture, drawing, installation, film/video, performance, and public art. Her practice is a critical exploration of nature and transformation that often features industrial objects and organic materials such as plastic bags, tree branches, or newspapers, addressing their relation to our consumerist society.

C&: You have worked and experimented with multiple mediums. How has this been influenced or shaped by your environment?

Maren Hassinger: Well, let me trace an instance where a medium change was influenced by environment. I had a studio in LA from approximately 1974 to 1984. It was large. 20 by 40 foot with high ceilings and a concrete floor. There were windows on two sides, which I covered with paper. This admitted light without sacrificing privacy. In it I made many pieces. Some requiring wire-rope fabrication and others installations of branches and “home-made” stones. But when I departed for New York City and my residency at the the Studio Museum in Harlem, I made lots of preserved rose-leaf collages and installations of wire rope (which needed no fabrication), dirt, and torn paper, and video.

Our studios at the museum were converted offices. There were wall partitions, linoleum floors, a wall of windows facing 124th Street’s crack epidemic. We could all see one another’s works. It was a communal space which included the community of Harlem through our windows. It certainly was not the hermetic space I enjoyed in LA. It intertwined with life. And, I guess, my large final installation with wire rope, dirt, and torn paper (now in the Studio Museum collection) reflected that.

C&: How has your relationship with decaying materials like newspaper evolved as your career has progressed within an increasingly commercial and digital world?

Maren Hassinger: I don’t think of newspaper as a decaying material. The Sit-Upons that I made exclusively from The New York Times have lasted a decade in the same condition as they were first made – no yellowing or browning, no fraying or disintegration. The world is increasingly commercial and digital for some, but it is also a world that includes less affluence and education. The reason I use The New York Times is because it’s the paper of record for the United States. It contains all of our stories, lives, tragedies, and joys! Using the newspapers brought me to a more compassionate conception of our world and I am forever grateful to those who toil to bring us these truths. I know it is our task to live together in equality to heal our world.

C&: In 1983, with Senga Nengudi, you performed a piece titled The Spooks Who Sat By The Door as protest [at the Long Beach Museum including only one Black artist in the exhibition At Home]. How do you compare your situation at the time and the conditions of young Black artists today?

Maren Hassinger: I believe I was in the show I protested! My protest was supporting Senga Nengudi and the other artists who were not found and included. It was a situation, like many in the art world, where power corrupts and can bend the truth of a situation.

Obviously, young Black artists today have opportunities we never had. For one, there’s all kinds of digital media forums to support their practice. The numbers of artists of color has increased in schools and professional careers to an extent which is not comparable to my beginnings. There were far fewer Black artists who aspired to serious careers in the visual arts.

This particular protest that you speak of was also aimed at the white feminists who curated the show. Our feeling was that “our sisters” were overlooking us, excluding us.

All that has changed now – witness WACK!: Art and the Feminist Revolution, curated by Connie Butler in 2007. Sadly, I wasn’t included in that show, but many deserving women of color were.

C&: As a teacher, how do you conciliate being influenced by the pedagogy of Paulo Freire with the fact that students in the US today are more pressured to think commercially?

Maren Hassinger: Freire’s pedagogy was frequently read and discussed in my seminars with Rinehart School of Sculpture students. Compassion and equality were central ideas in our discussion of an artist’s responsibility. These are ideas that all responsible citizens must embrace. I like to think of artists as visionaries – seers even. Their ideas are based on concerns about the meaning of life.

I am truly sorry if art students are pressured to think of themselves as salespeople making commercially viable products. This is a totally uncreative attitude, inappropriate to any kind of education. We are not alive to make money.

I taught Paulo Freire as opposed to business management to give my students a reason to continue and to understand their social relation to the world. We have to be intelligent and aware of the world, and our work should reflect that. Everything might be business, but your practice should not have to be.

C&: The works in your upcoming London exhibition address various sociopolitical issues of the past decades. How do you take into consideration time and place when making art in a changing world?

Maren Hassinger: One can only make work about what one knows…. One thing I do know – nothing is static, motion is life. If you’re implying that my age makes it impossible to address current concerns, to be cognizant of the world around me, you are mistaken. And you’re incorrect if you say my work is addressing outmoded sociopolitical issues. If what I desire most concerns equality for all, we have never gotten there. That quest is not outmoded, it’s in progress. I want this planet to survive. I see that as a possibility only if we work together in solidarity via equality to preserve our home.

Maren Hassinger, Passing Through is at Tiwani Contemporary, London, UK from 2 October through 15 November 2019.

Maren Hassinger was born in Los Angeles, CA 1947 and lives and works in New York. She was the Emeritus Director of the Rinehart School of Sculpture at the Maryland Institute College of Art in Baltimore, which she led for 20 years. During a career that has spanned more than four decades, Hassinger has explored relationships between the industrial and natural worlds in a practice that is both meditative and critical. Currently, her work is focused on exploring issues of equality.