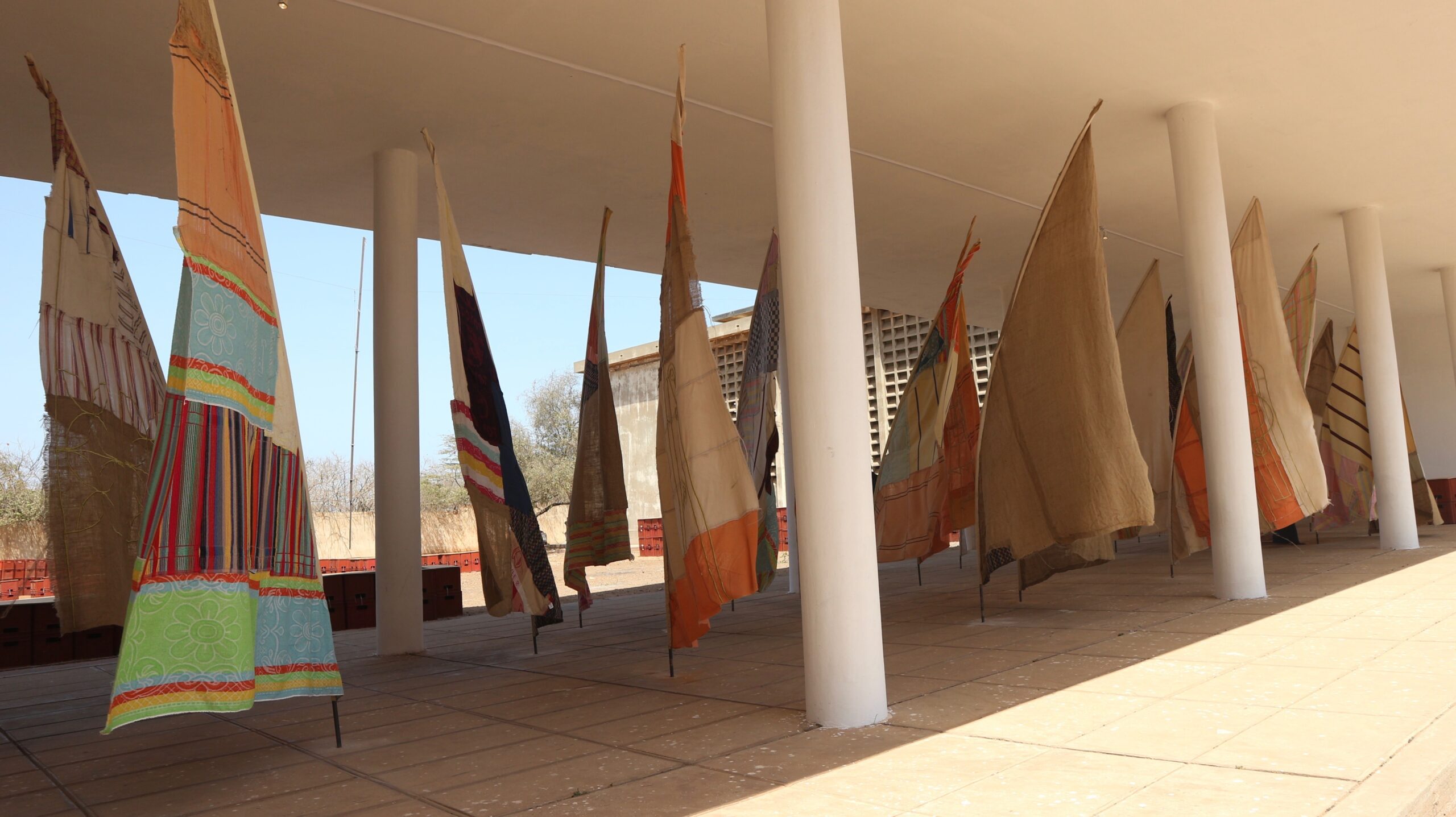 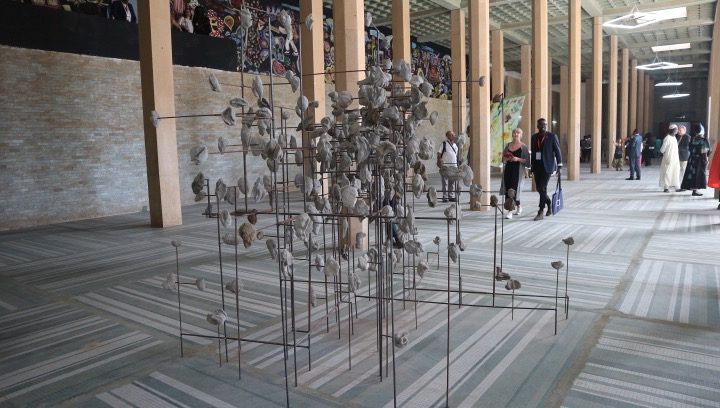 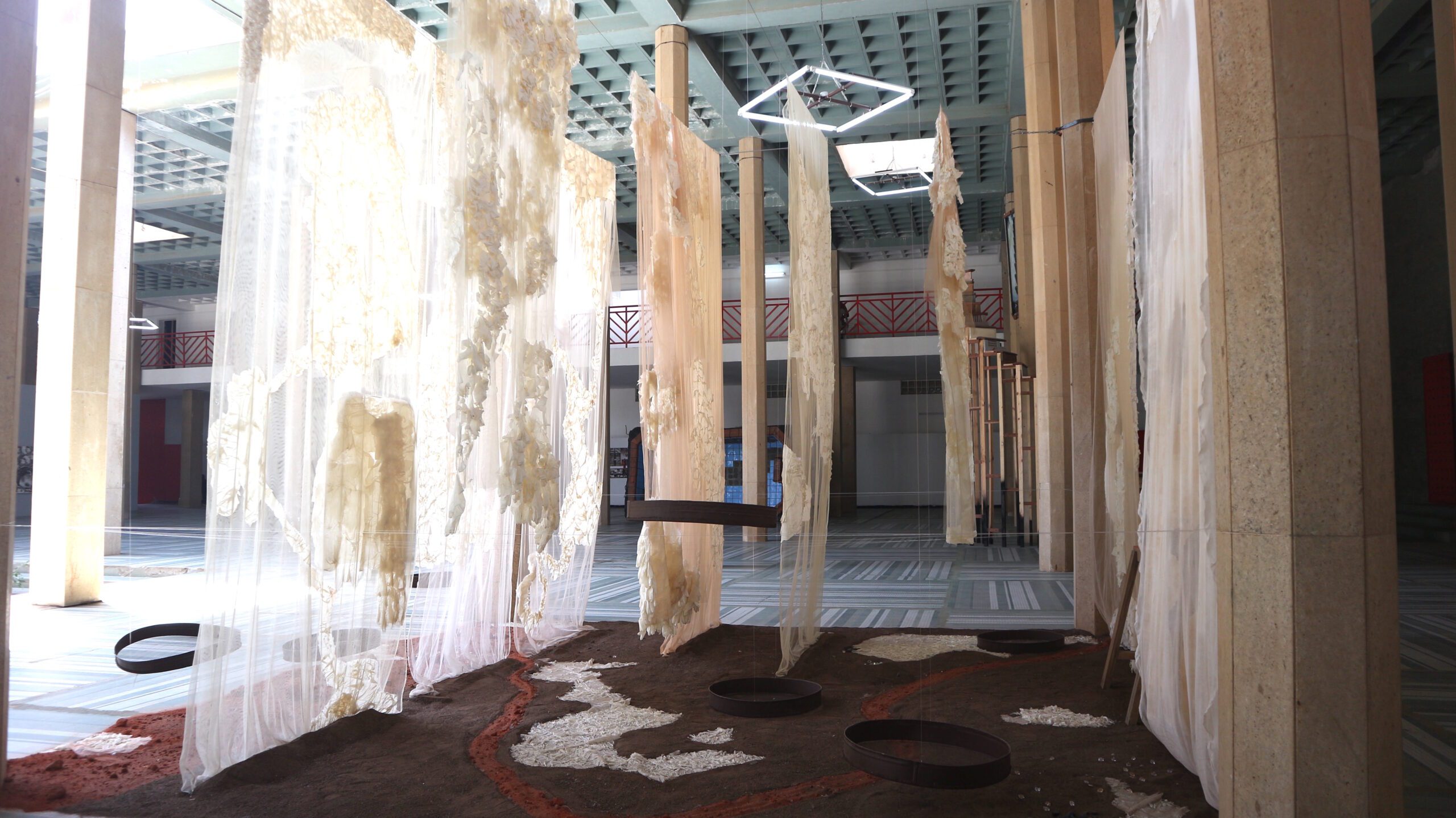 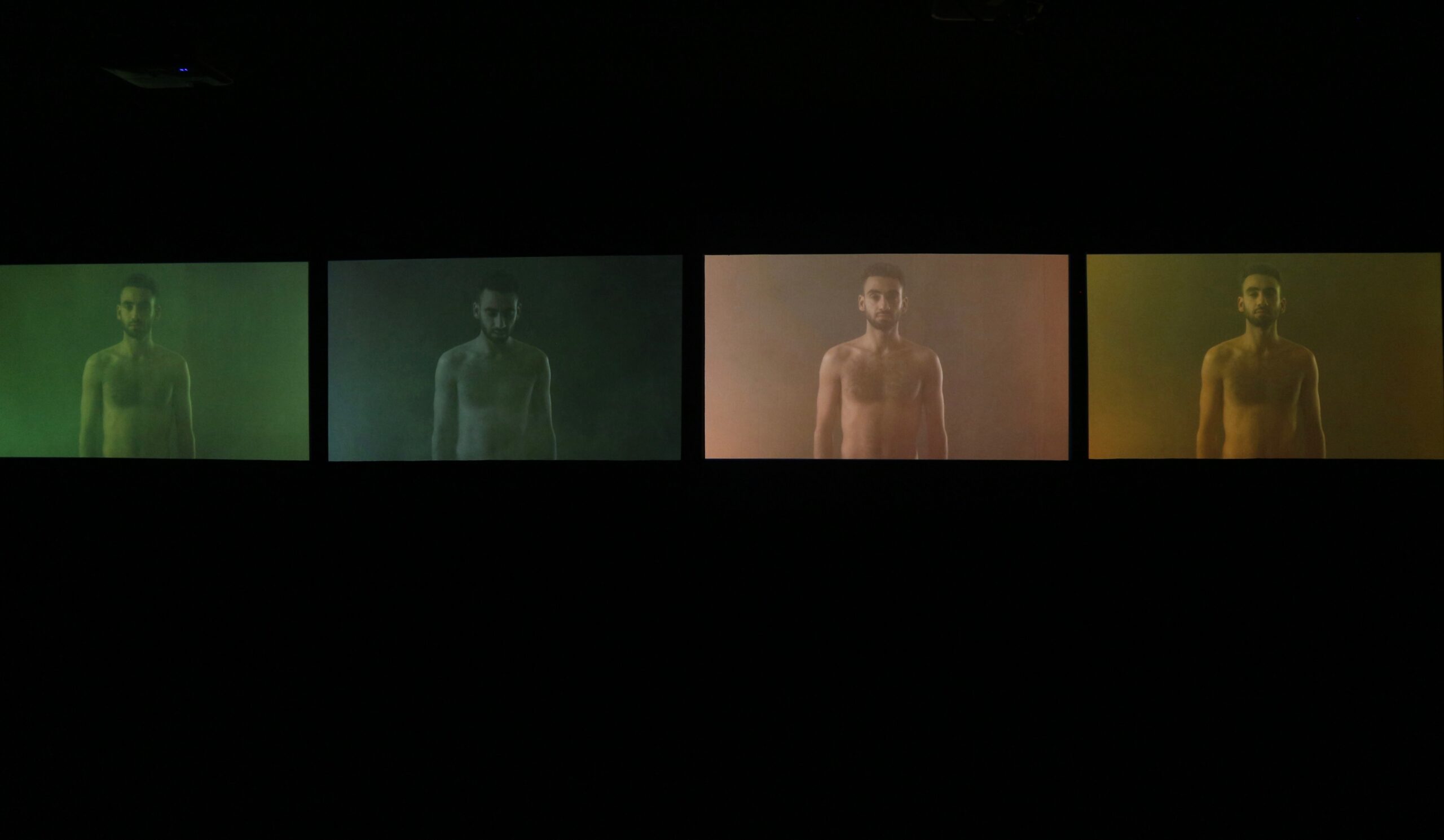 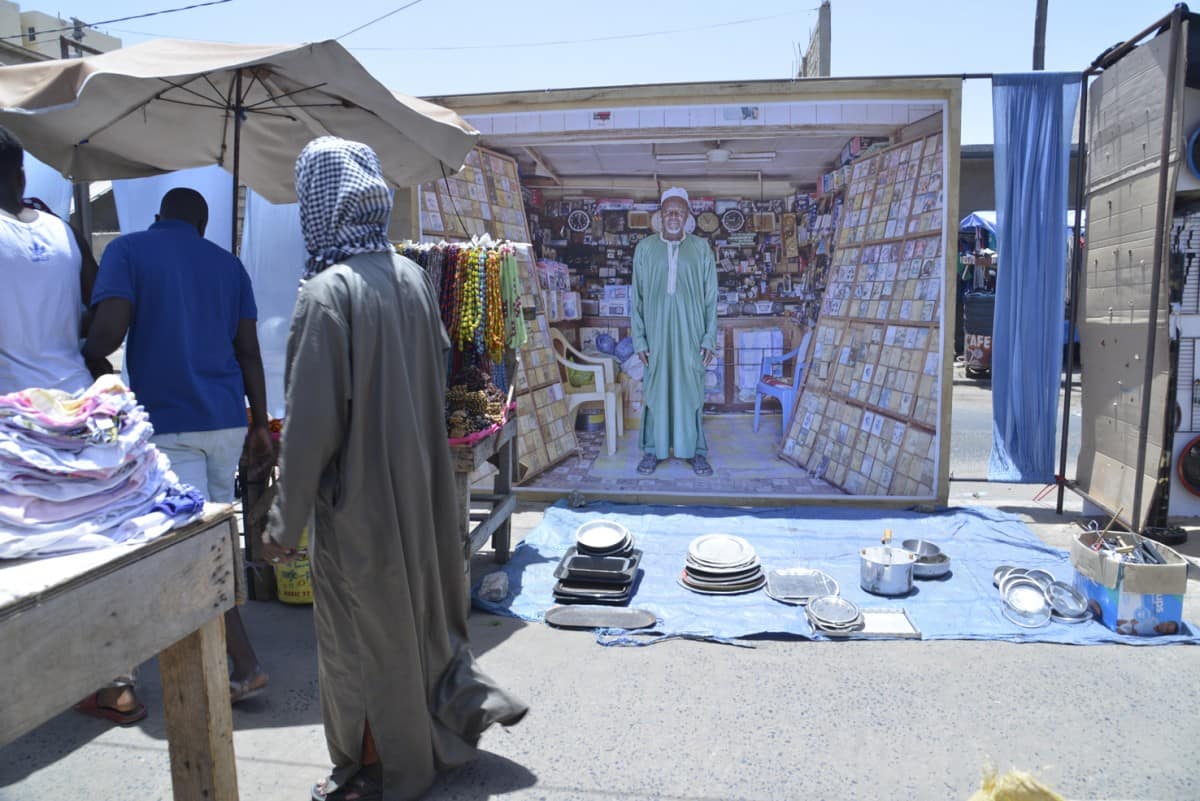 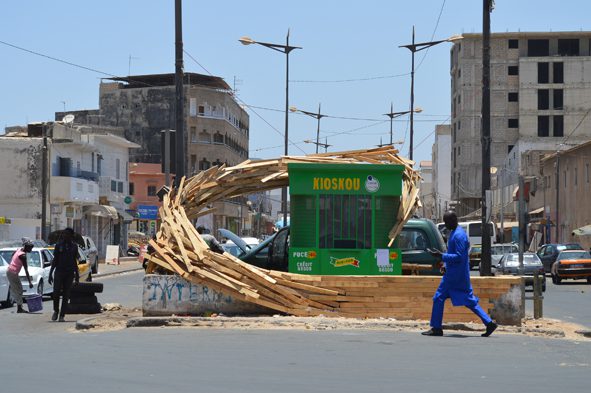 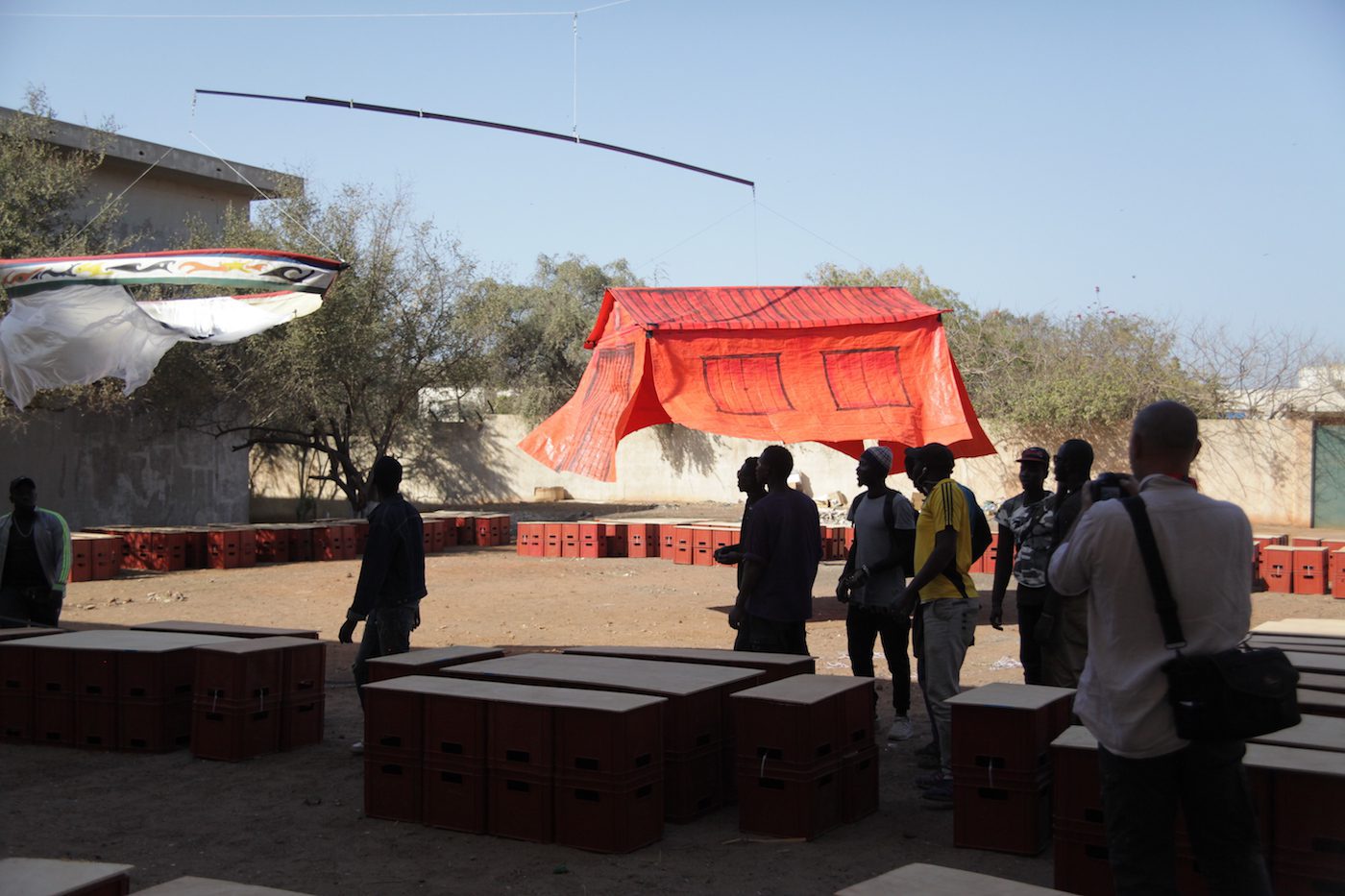 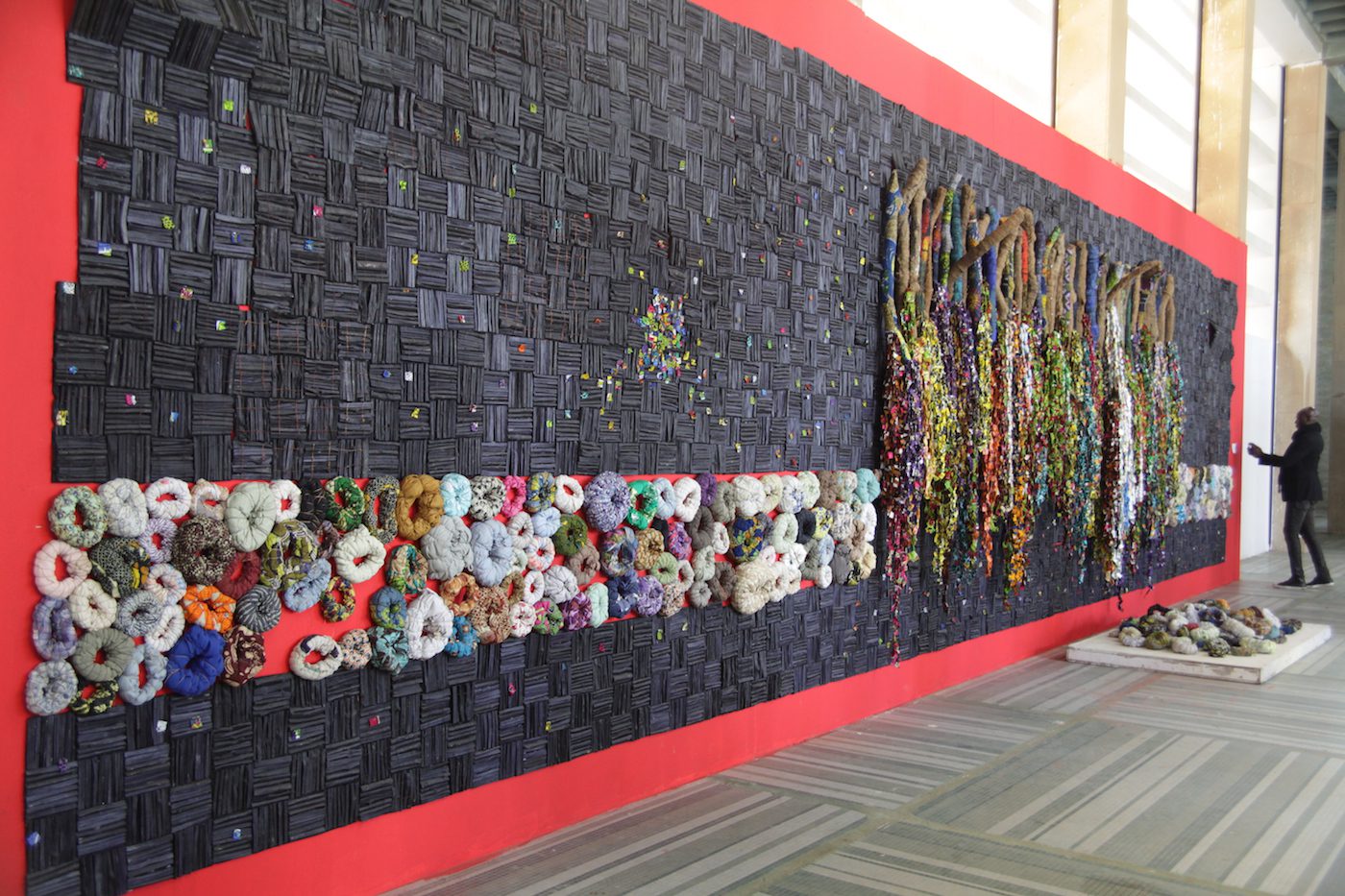 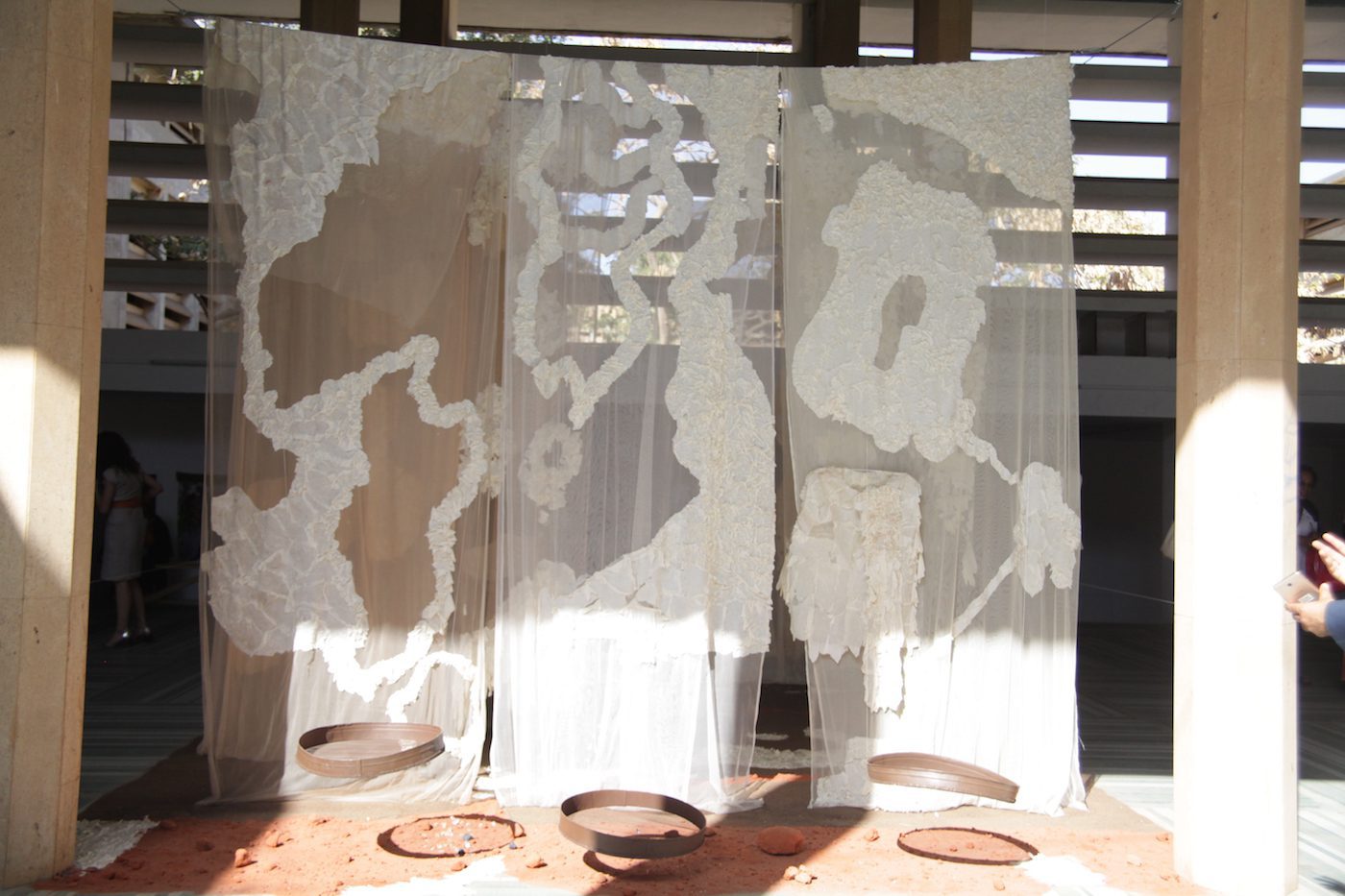 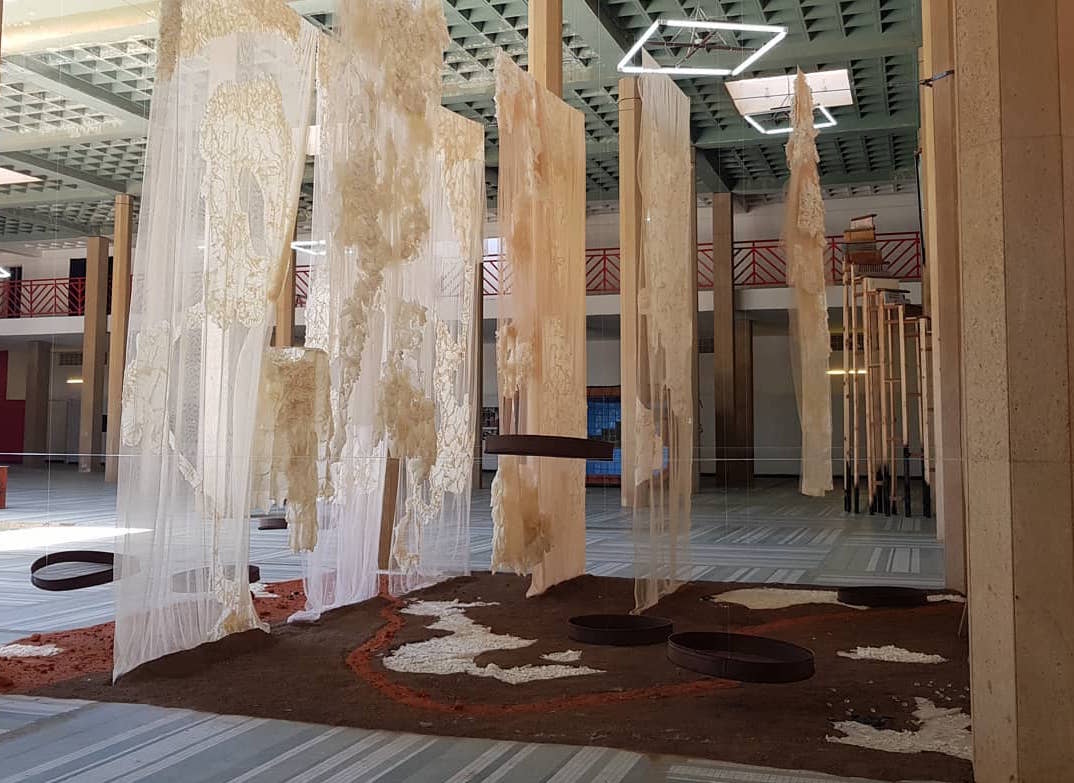 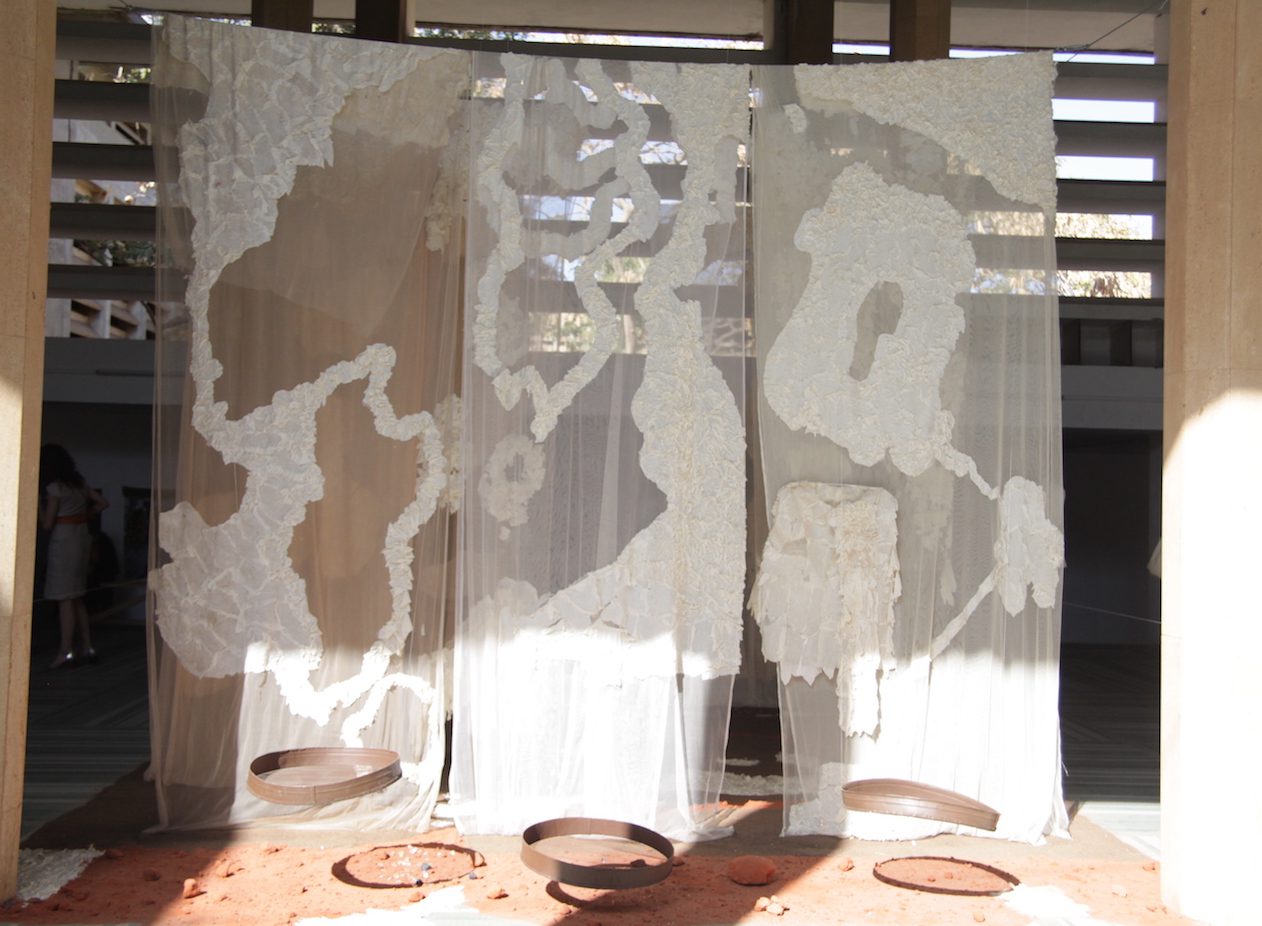 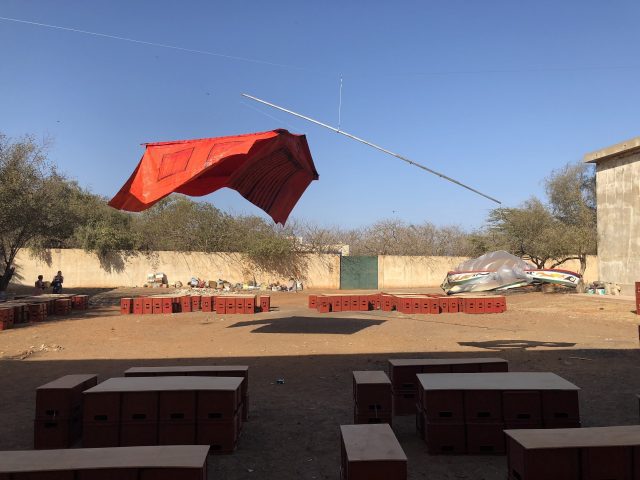 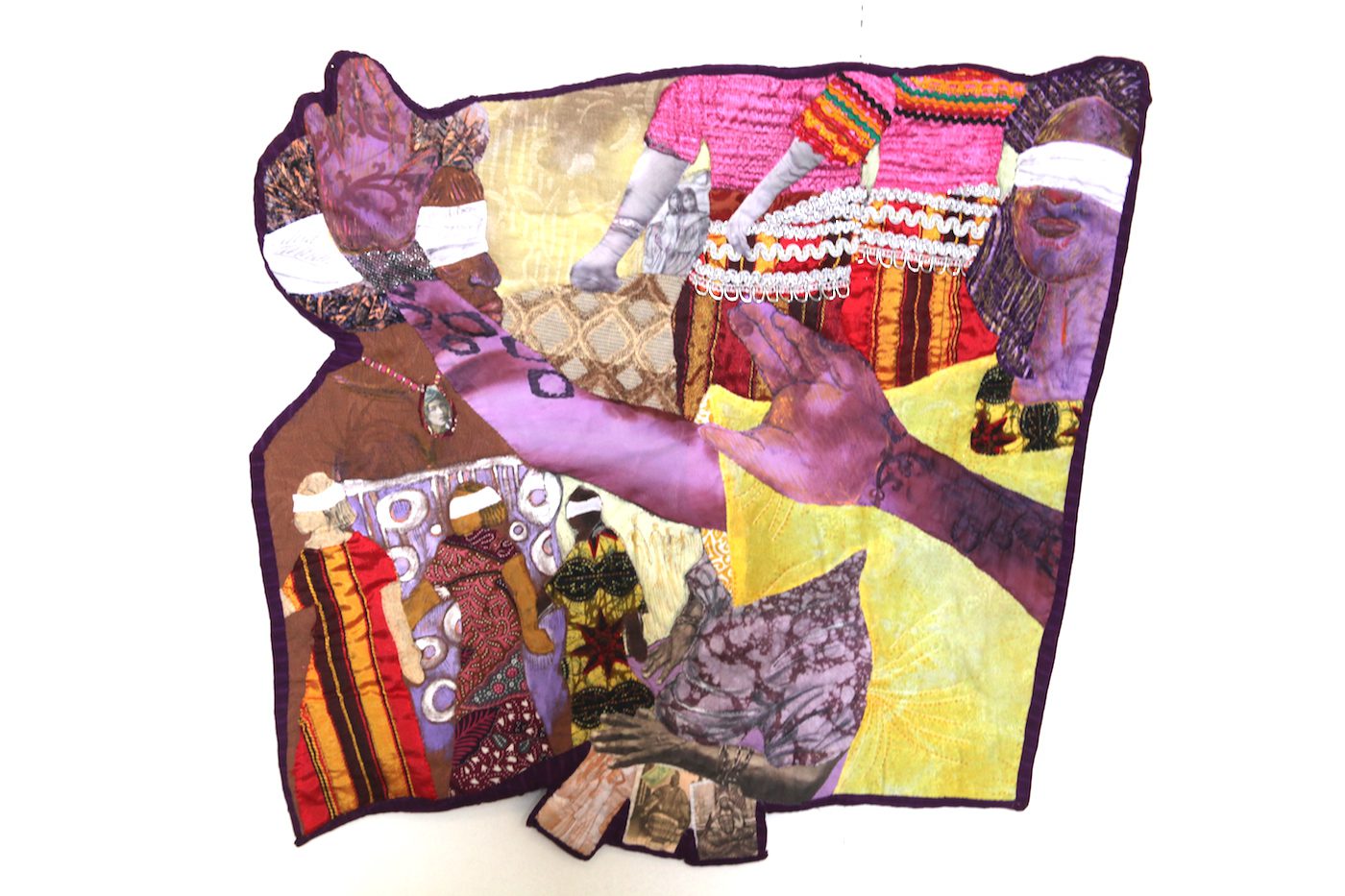 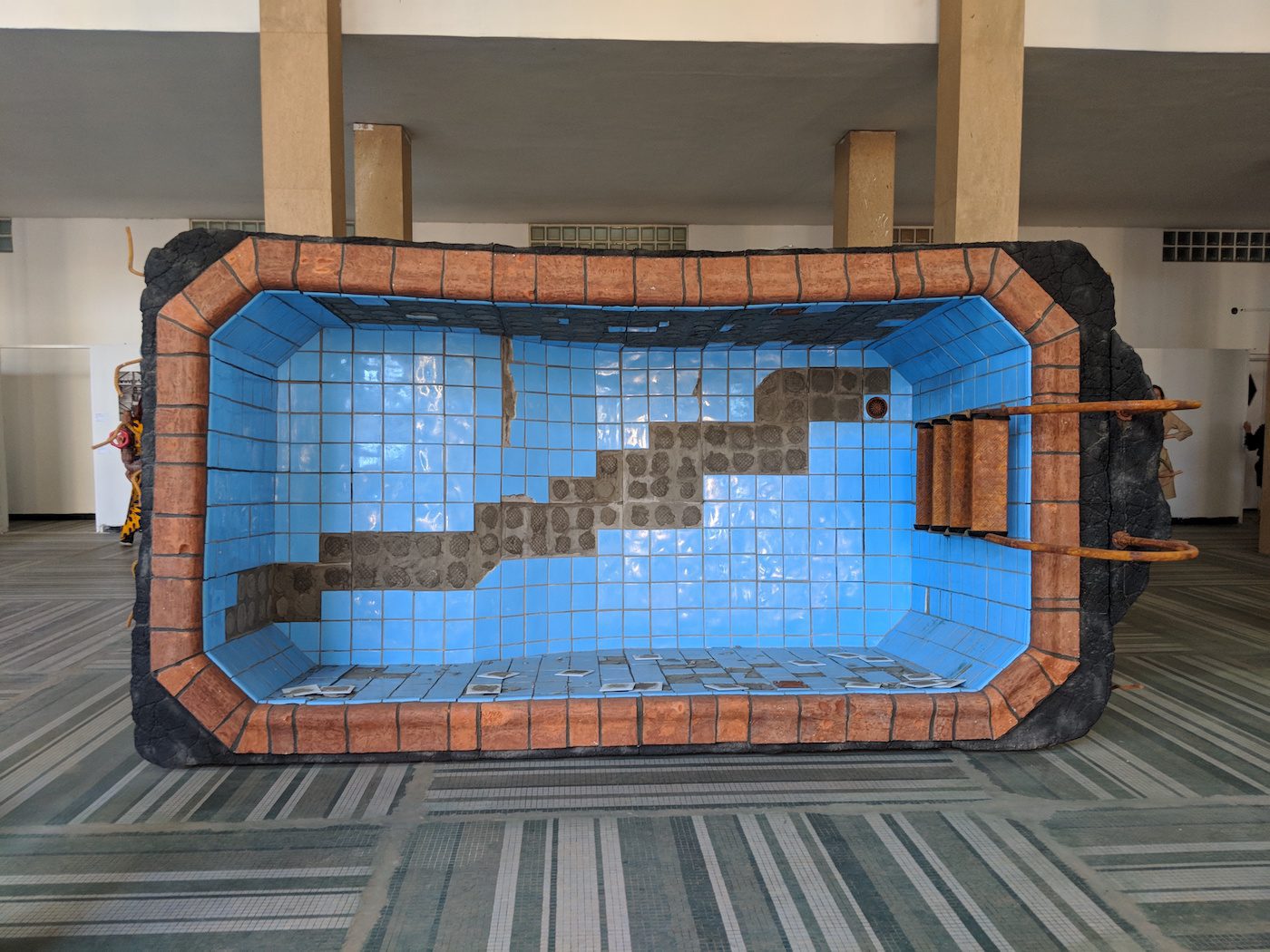 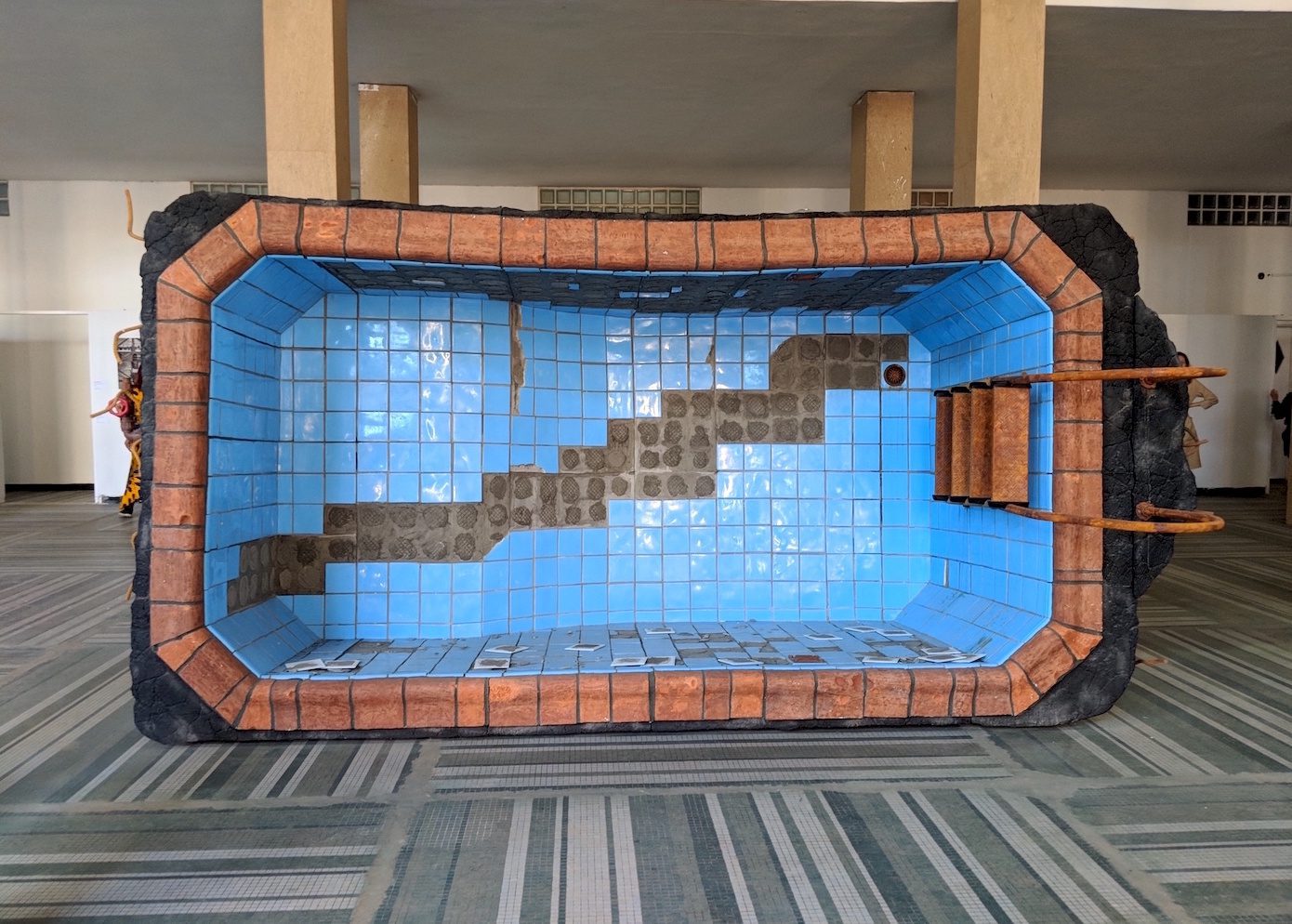 Entitled L’heure Rouge (The Red Hour), Dak’Art 13 has invited 75 artists from Africa and its Diaspora to search for “a new humanity”. C&’s Deputy Editor Will Furtado looks into how the artists and curators used experimentation to arouse new ways of thinking.

Experimentation is at the heart of any innovation. And this applies to technology, ideas, or art. At the 13th iteration of Dak’Art – Biennale de l’Art Africain Contemporain, experimentation takes center stage as a means to search for new realities or “a new humanity,” as the subtitle suggests. Entitled L’heure Rouge (The Red Hour) and curated by Simon Njami, Dak’Art 2018 features 75 artists from Africa and the African Diaspora across 33 countries in the main program, as well as an ambitious 300 off site presentations and a one-kilometer street intervention.

Used for the second time as the main venue of the exhibition, the grandiose Ancien Palais de Justice on Dakar’s south coast hosts a collection of art across the mediums of painting, photography, installation, sculpture, and video.

Rethinking and reusing quotidian or disused materials is a method that’s prevalent in the venue with varying visually stimulating results. Using recycled materials, Ndidi Dike’s Mano Labour is made with printing plates, driftwood, acrylic, and polyurethane. With beige see-through drapes its aesthetics may be ethereal, but its story refers to something more sinister, the African continent’s (and more specifically the Democratic Republic of the Congo’s) illegal extraction of diamonds and rubber. Referring to something quite opposite – the dumping of used medication, capsules, packs and cartons in Africa – Paul Alden Mvoutoukoulou’s Urgence (2017), a blood-red installation room, recreates the emergency room of a hospital with works alluding to the passing of time and the health industry using recycled objects – which you only realize by very close inspection – to a strong structured visual effect.

Olanrewaju Tejuoso’s Oldies and Goodies (2016) comprises discarded waste such as cans, bottles, and bags used to form a massive wall sculpture that bears a more traditional African look, resembling patterns in wax prints. In contrast, Frances Goodman’s also abstract work, Rolling Red (2018), is a biomorphic and indecipherable wall sculpture that is made entirely of fake nails and comments on the culture of excess and the ephemeral. 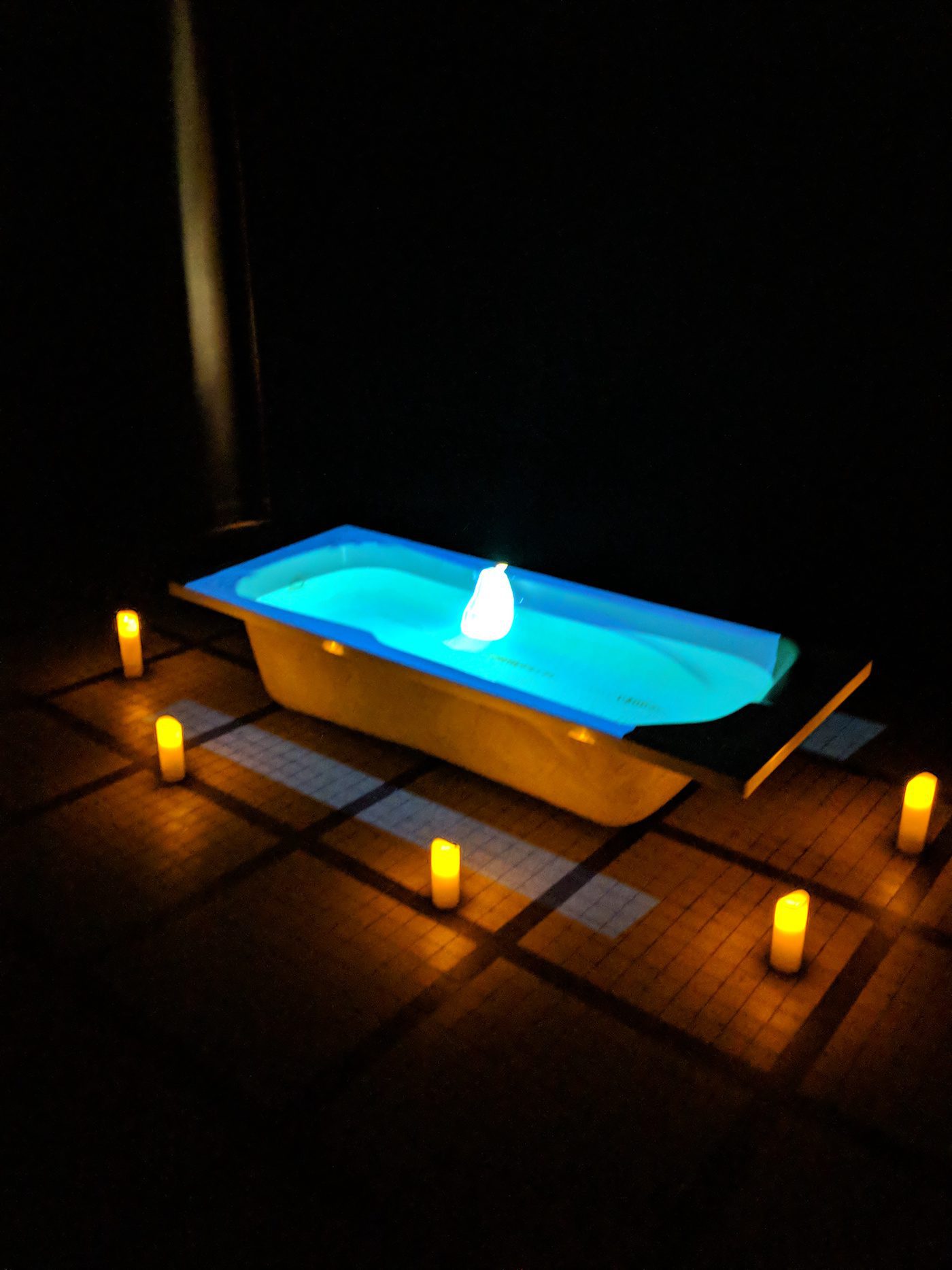 Taking experimentation to a more conceptual ground, many artists probed the potential of underused qualities of well-known objects. Rehema Chachage’s Nankondo PART III (2017) for instance, is a collaborative work with her mother about the disappearance of her eponymous grandmother, who was believed to have been sold into slavery. The piece consists of an illuminated bathtub filled with glistening water with text projected onto the surface, surrounded by battery-powered candles. Making allusion to African spirituality, the piece has an immensely charged ritualistic aura; it serves as a shrine to Nankondo and by extension offers a tribute to absent loved ones. Juan Milano Benito does the opposite by turning the usual into the grotesque with his majestic and random uprooted swimming pool. Microwave for one (2017) is in fact a replica of a popular pool in Cuba which here works as a celebration of failure while questioning what is real.

Also monumental and optically illusionary is Ledelle Moe’s Lament (2017-18). The origin of the sculpture, which consists of concrete and steel, begins with the artist gathering soil from different locations and melding it into small casts to be attached to a steel structure. Making use of the “permanent” quality of the materials while juxtaposing its transience, the sculpture – albeit motionless – has its visual effect activated once you walk around it. Reminiscent of the special effects in the sci-fi cult film The Matrix, Lament draws attention to all of the magical transformations and mutations that movement and amalgamation can bring about. Referencing transition and departure is also part of Ibrahim Ahmed’s reassuringly poetic Only Dreamers Leave (2016-17). Consisting of 30 sails blowing in the wind just outside the Palais, the embroidery on the fabric references iron gates in Egypt as symbols of wealth that work as exclusionary barriers for large parts of the population. Far from being a simple metaphor, the installation critically examines the myth of the immigrant dream by highlighting that some systems of exclusion will follow you everywhere you go, while complicating notions of the “North/South” binary.

The video artist is present

Mehdi-Georges Lahlou also repurposes materials, this time around with food stuffs and on video. In the seven-minute Spicy “Turmeric, Cinnamon, Ginger, Henna” (2015) the Franco-Moroccan artist is bare-chested and shows his reaction to being sprayed with different spices. Making allusion to the first time the Germans used mustard gas in WW1, the piece questions the ambivalent utility of raw materials that can be used for evil or, in this case, for their aesthetic qualities.

Intent and reaction is also very much at the core of Emo de Medeiros’ massive installation room. Using neon lights, surveillance cameras, huge screens, mirrors, and mannequins, )U( (2018) is activated when visitors look at themselves on the various screens, but also when different visitors react to images of each other being displayed on huge screens across the room. The interactive and selfie-ready installation also works as a metaphor for contemporary Africa, if not the world at large, one that cannot exist without all its parts reacting to each other’s reactions.

Looking at the world and its state of anxiety on video is Jackie Karuti. In The Planets-chapter 32 (2017) the artist uses the iconic silhouette gasholders that can be found across the UK to investigate phantoms of a problematic history and technology that contribute towards today’s anxiety. Yassine Balbziou on the other hand gives the surreal a new kind of relevance by adding role play and humor. With his 15-minute video and mural the artist created a universe with relentless visual codes and non-linear narratives that attempt to express our deplorable human condition through laughter.

Besides the main venues, some of which were curated by guests, there was also an exhausting selection of 300 spaces spread across the whole Dakar region showing art of widely varying caliber. Despite being hard to access, with no tours in place, many of the spaces offered art from local and international artists for everyone to enjoy. The off program is as established as the main one and there are other venues that operate collaterally with talks and performances of international appeal – such as Koyo Kouoh’s Raw Material Company which holds many performances and an exhibition on groundbreaking journals from the Global South. This year however, Dak’Art started a new initiative to bring art right into the heart of the city which proved to be a success – judging at least from the number of locals engaging with the activities provided. Called Mon Super Kilomètre (MSK) and supported by the Josef and Anni Albers Foundation, the initiative is an open-air gallery along a kilometer-long stretch in Dakar’s Medina market area. Along the road there are screenings, theatre performances, art performances and installations by international and many local artists – and surprisingly and thankfully the audiences are equally mixed.

Dak’Art is known to many as the African art biennale. It is massive, majestic and set in an idyllic peninsula. And this year its physical magnitude united with its conceptual magnitude via the challenge of experimentation while being inclusive, has raised the stakes once again. Yet there’s still so much potential left to explore – bring on Dak’Art 14!