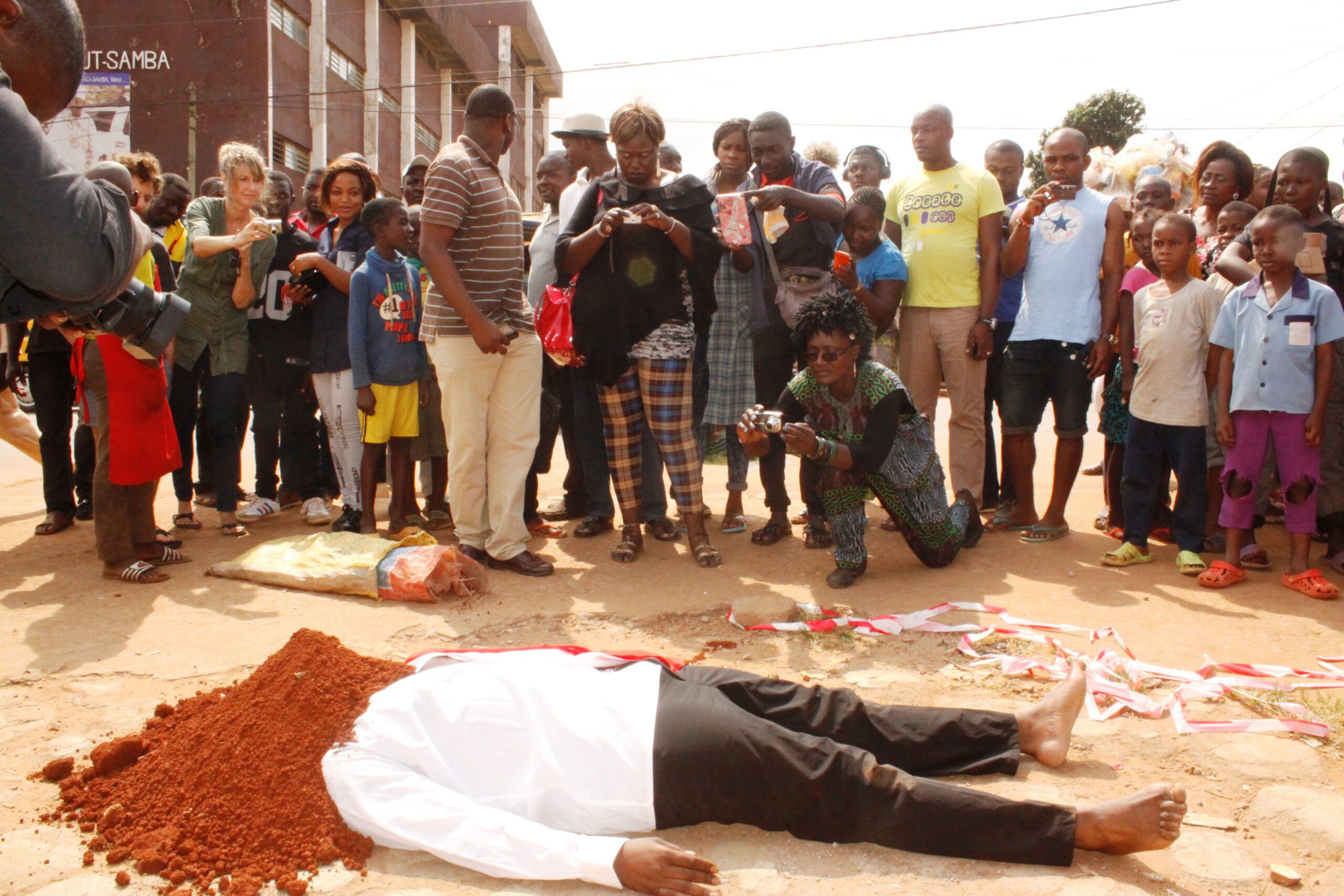 The facial features of his model (Carmel Neba), highlighted by the brush of Ange Kayifa. Photo: Etienne Nsom
3/3
3/3

May 30, 2017, marked the inauguration of the Cameroonian capital’s first contemporary art gallery. Contemporary art is revealed in a new light in Yaoundé, and visual artists, who were already very active, are being offered a new environment in which to flourish. Let us follow the trajectory of this new conception of visual art in Cameroon as it seeks to make its voice heard loud and clear across the continent and beyond.

Disconcerted, shocked, enraged. Passers-by in Yaoundé slowly stop in front of the inert body of Christian Etongo. Lying on the ground, the artist performer has just covered his face with earth. “Is he dead?” is the question in the minds of these men and women, who do not know that they are the ad hoc audience of a performance. This distinctive art, which is fueled by the visual, is made to overturn received ideas, to denounce a society where the weak have never enjoyed the rights of citizenship. In this lifeless posture, Etongo, one of the pioneers of a generation of Cameroonian performers, was speaking for all those who have died in anonymity.

The artist, who is known for his unusual performances about mystical and traditional African rituals has the courage to shake up habitual ways of thinking. The RAVY Biennale — Rencontres d’arts visuels de Yaoundé — which had its fifth incarnation in 2016, gave him the opportunity to showcase his accomplishments. RAVY, a groundbreaking event in the Cameroonian capital, offers a helping hand to disciplines like performance and plucks spectators from the city’s streets and back alleys. From November 29 to December 2, 2017, Etongo will push the practice of this artistic genre a little further as part of Perform’Action Live Art in Yaoundé, the first festival to be devoted to performance in Cameroon.  Yaoundé has a long history with the visual arts. If the desire to use one’s body, to serve it up as a means to convey a militant, hedonistic, or liberated message, is in its infancy in Cameroon, other visual arts (less risky, some may think) like painting and sculpture have had staunch followers. The younger generation is increasingly showing its mettle and follows its own trends.

NATURE AT THE CROSSROADS OF TRADITION

In a city like Yaoundé, where urbanism easily commingles with greenery, one of the many routes taken by contemporary artists is that of ecology, a contemplation of nature. Jean Michel Dissake Dissake, a practitioner who is a firm believer in “picto-sculpture” (a marriage of painting and sculpture), is a “miracle“ worker. “I resuscitate dead material,” he says. He makes use of recycled objects, like a mortar picked out of the river that runs through the city, a giant root pulled up by workers on a building site, or a fire-blackened pot recovered from a woman selling beignets. In his workshop, the Studio Moudiki, which is located in a popular neighborhood of Yaoundé, he is studying a new creation. Dissake is known for his masterful work with lianas. He twists them and they yield under the pressure of force, science, and patience to create impressive forms. His work L’appel de la liane (The Call of the Liana), presented at the Jeux de la Francophonie 2017, is a model of Dissake’s relationship with this class of plant, which, in the forest, joins the large trees with the small. “The liana is the nervous system, the heart, the element that connects me to the other, to my cultural identity, my past.” The artist’s initiation in the forest reinforces his relationship with Mother Nature. She is an omnipresent feature of his exhibitions, for example in Palabres écologiques, Link, etc. With the liana, he brings together elements like metal and wood. Circuit boards taken from an old television or a computer are also encrusted in wood fibers. The whole thing is given a sense of unity by the layer of paint. “You can’t speak of contemporaneity without knowing where you come from. That’s why I try to generate a dialogue between nature and technology.”

The facial features of her model (Carmel Neba), highlighted by the brush of Ange Kayifa. Photo: Etienne Nsom

THE BODY, AN ART OBJECT

For her part, Ange Kayifa explores another aspect of the dialogue. In her own distinctive way, Kayifa transforms scarification into body art, “by adding the beautiful,” she explains. The visual artist uses her body as a canvas. In combining the traditional with the contemporary, she makes a return to her origins: “Scarification in certain Cameroonian tribes was a sign of belonging, of having roots.” When she started out, the young artist wanted to work in the world of fashion. To feed her inspiration, she went to theater or music shows and soaked up the advice of artists with an established reputation like Barthélémy Toguo, Joël Mpah Dooh, and Christian Etongo. Kayifa reveals the curves of the body and its tiniest mysteries with gouache, pigment, charcoal, and red earth. The face is full of lines and hollows that her brush loves to follow. “Generally speaking, I improvise within the framework of performances or installations,” she says.

The woman has pride of place in Kafiya’s eyes. “Fat, thin, albino, black, white: All women are potential models for me.” She is also a keen advocate of self-love after childbirth. “I find stretch marks very beautiful,” she says. She must, however, confront the thorny issue of nudity in body art. “The nude has a very bad image in Yaoundé and elsewhere. I try to approach it in a way that is less shocking. I want to take people back to history, to remind them that the torso, the breasts were always exposed in the time of our ancestors.” The visual arts in Yaoundé embrace free thinking, in a constant push toward exploration, expression, and creative freedom.