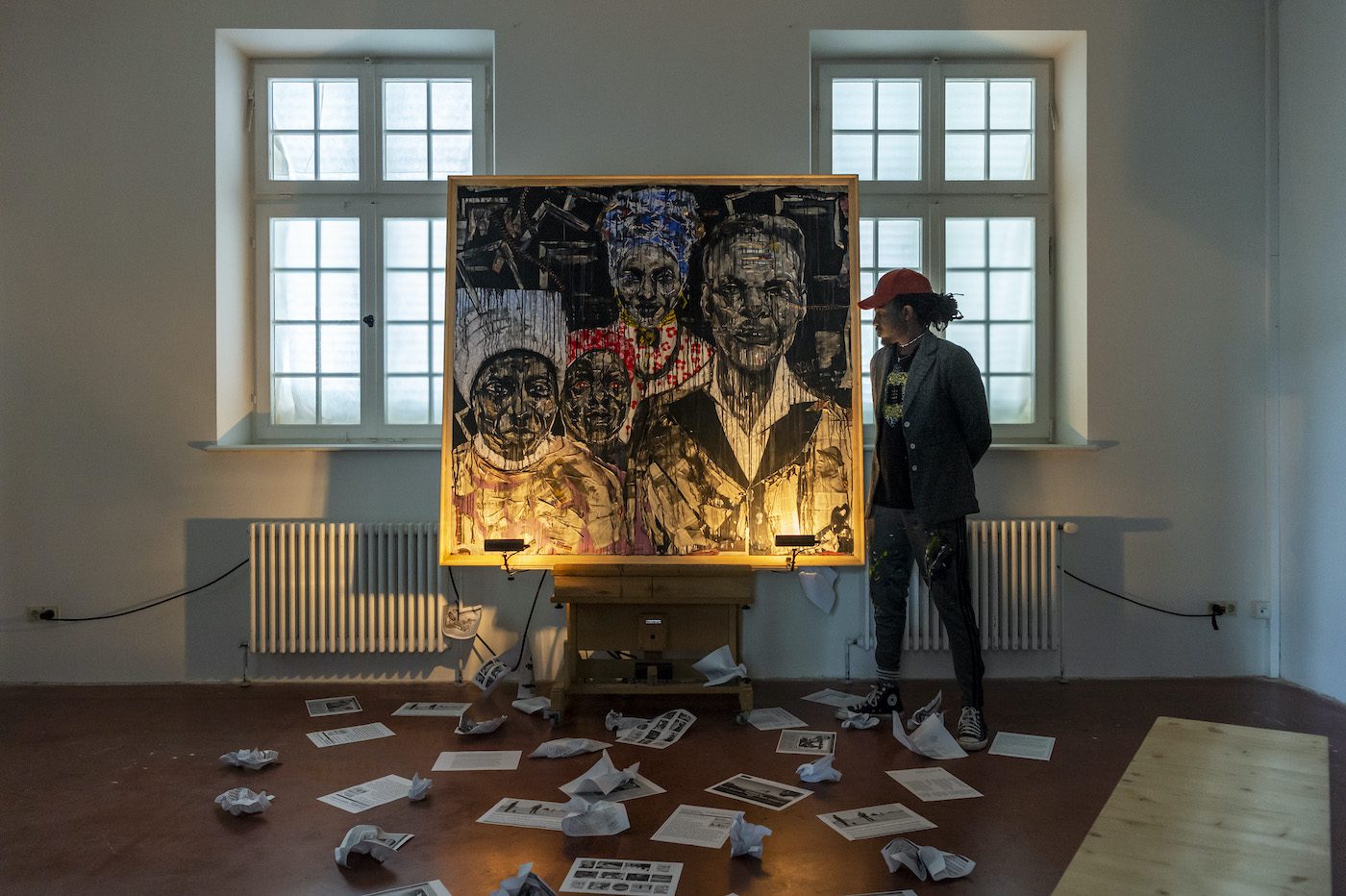 Hage Mukwendje next to his work created during the residency at Schloss Solitude, 2021. Courtesy the artist.
1/4
1/4 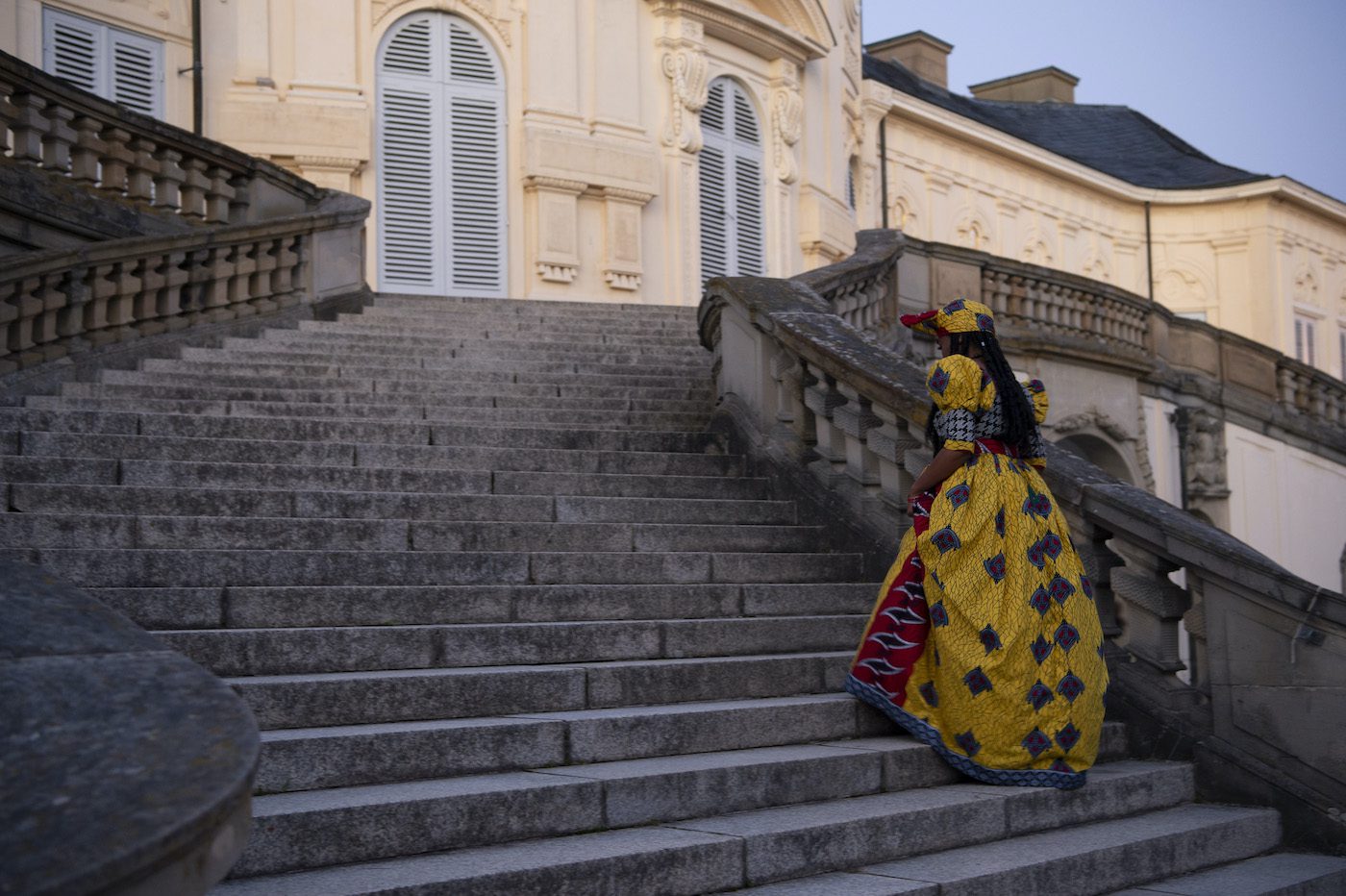 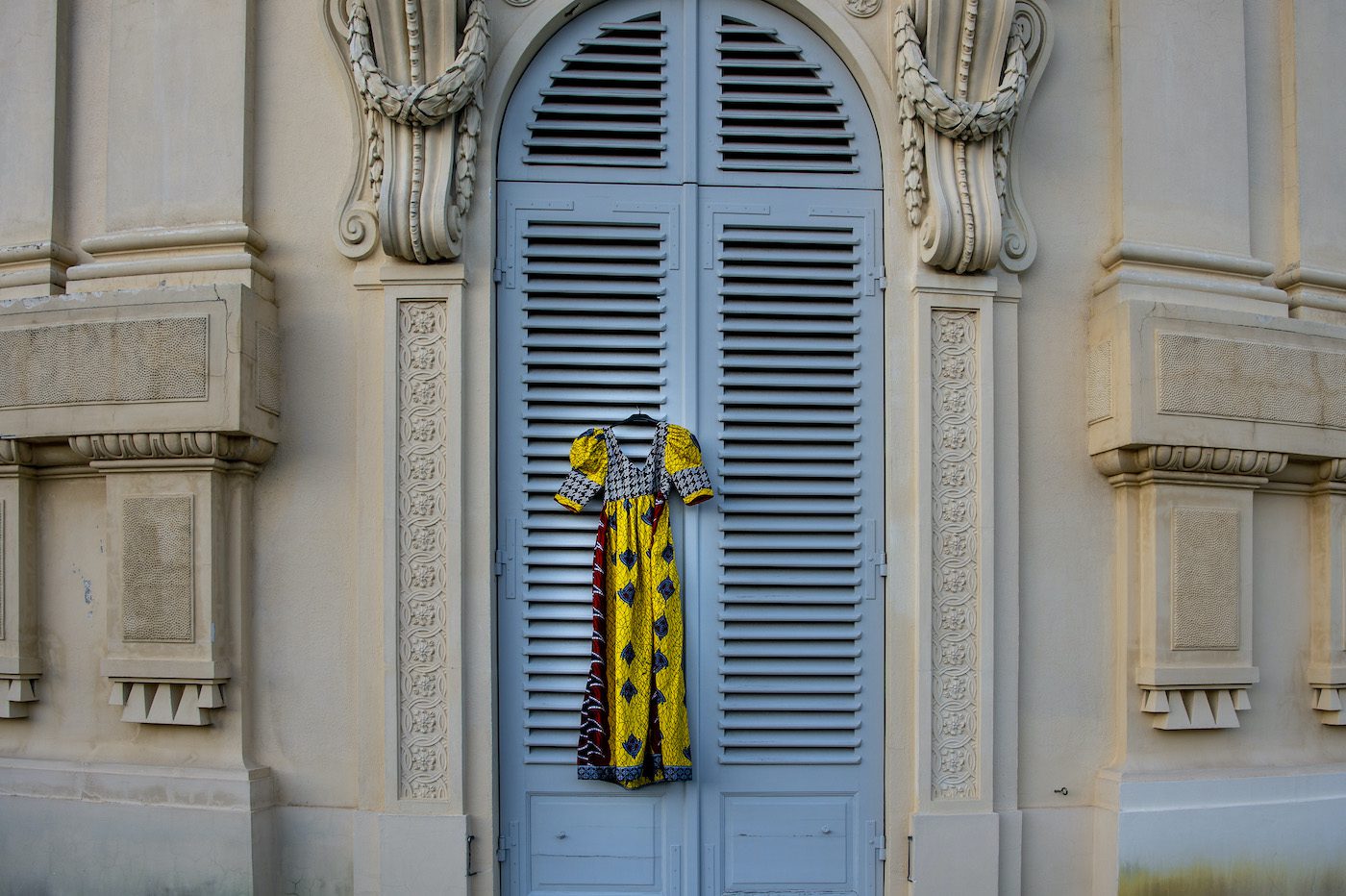 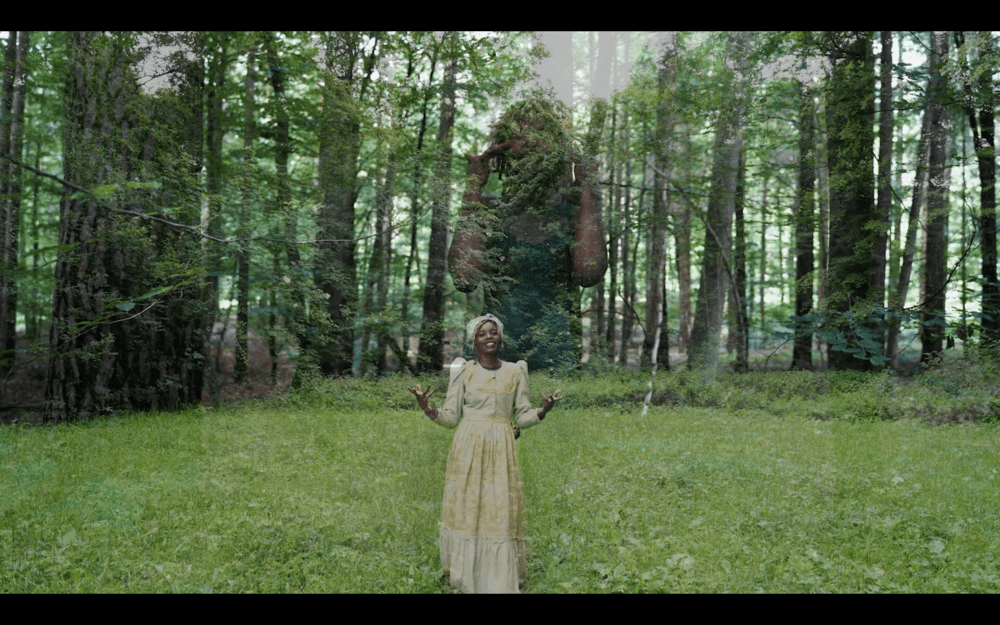 Three Namibian Artists on their Residency at Schloss Solitude

Contemporary And: Could you briefly introduce yourselves and share how you each became an artist?

Vitjitua Ndjiharine: I am a visual artist who works in a variety of media, with painting and collage but also with digital formats. I like to experiment with materials and explore modes of knowledge production from a multimedia approach. I became an artist out of curiosity about the world around me and which I am a part of. Over the last five to six years, my practice has involved working with historical narratives and archival objects, working to investigate and recontextualize this material in order to explore paths to liberation for myself – and perhaps in turn for others who like me question the world we live in. Most recently I have been interested in exploring color relationships in my paintings, combining additive and subtractive color models to create new modes of representing the body, as well as exploring light and its spectral components as a medium of knowledge transfer.

Hage Mukwendje: I started doing art at the very young age – at primary school I was drawing and sketching rather than focusing on school lessons. But then I didn’t think art would bring where I am today. Honestly it wasn’t a dream at all – I wanted to become an architect or civil engineer. Most of my drawings where structures with perspective, bridges, houses – in black and white because there was a lot of complications with colors. I am colorblind, and expressing what that feels like is difficult in social situations because it feels totally alien to most people. I can’t necessarily point at a color and tell you what it is, because to me there’s a lot of overlap: many colors can be very hard to recognize. I can’t even try. As an artist I rely on common sense in using dark colors and light to create the contrast I want.

Nesidano Namises: I am a performance poet. I was first introduced to spoken word while working as a radio presenter. With parents who were deeply involved in community and political activism, growing up in a country where the narratives of many people are disregarded, and wanting to find an outlet for my own trauma, I always connected to sharing stories, and so I joined Spoken Word Namibia to see the different ways in which performance can be explored, but also because I related to those I met in that space.

Hage Mukwendje next to his work created during the residency at Schloss Solitude, 2021. Courtesy the artist.

C&: The residency at Akademie Schloss Solitude is about reflecting on the colonial history that connects Namibia with Germany. Can you guide us through your artistic process and the work(s) you have created in Stuttgart?

VN: My project at Solitude is centered on archival material and objects that were taken by a Swiss botanist in the mid to late 1880s from various locations in Southern, Central, and Northern Namibia. These objects were collected from various families, including my own, and brought to Switzerland, where they eventually became the founding collection at the Ethnographic Museum at the University of Zürich. In light of the research, I started to work on a series of portraits inspired by figures from different eras in my family history. I also started to explore ideas through performance, using the body not only as an agent for disrupting unsettling narratives, but as an extension of these same narratives.

HM: I have been working on large-scale paintings inspired in Namibian underground pop culture from the 1950s to the 1970s. That period marked some of the harshest years of racial discrimination under the South African apartheid regime that controlled Namibia following the end of German colonial rule – Namibia only achieved independence in 1990. This work has led me to embark on a fictional-historical investigation of the context in which my ancestors lived and the memories carried by their personal objects. By reading, discussing, writing, and arranging material, I am digging remembrance out of the ruins of memory through fictional creations that remain uncertain or impossible to prove true. One of my methods involves using photography from my family albums as the basis for my paintings, onto which I also collage newspapers. As a colorblind painter, I find the black and white of newsprint offers a safe space to compose images, as the use of color follows an intuitive, non-rational employment. A second method manifests through the use of sounds, melodies, and songs – I am especially interested in traditional Namibian music, much of which has been forgotten due to colonialism. Most recordings of this music are kept in German archives, where I have been conducting research in order 1) to produce paintings that translate emotions triggered by the sounds; and 2) to display paintings in installations that are also composed by a soundscape, in order to create deeply immersive emotional experiences.

NN: My work is currently focused on collecting, exploring, and scaping sound using that which is spoken, recorded, chanted, etc. The process includes writing poems and experimenting with the sounds of objects (such as the mouth bow) within the context of colonialism, and particularly the impact on women and artistic practices. It is also important to note the process of creating or reimagining (if possible) precolonial or excluded stories through post-colonial discourse and Afrofuturism. During my time at Solitude, my research and work was focused on interrogating the restitution of that which is not physical. Intangible things such as identity and dignity, for example. The work includes recordings from and references to protests and protest culture in Namibia, the resistance of women and PoC, folktales, and personal conversations. It is designed sonically during live performances with spoken word and movement elements. The work is still progressing as the discovery of “new” archives and ideas around restitution surface.

C&: In your artistic work in general, you each seem to be interested in finding new stories that transgress colonial narratives. Could you share your inspirations, instruments, materials, and strategies for moving forward while dealing with the past?

VN: Working with historical narratives is about creating new meaning, and about how I would want to be represented in history. I always approach things from the perspective that if any of the individuals depicted in colonial photographs were my family members, how would I want their stories to be told? And, most importantly, how can I tell these stories in a way that is empowering for others? Breaking away from representations that play into colonial power dynamics is a big motivating factor for me. The past is as much about the future, and within the Namibian context it’s important that we (re)tell and (re)center our (hi)stories in order to have a more equitable shared future.

HM:  I find inspiration in my own life experiences, utilizing numerous issues as subject matter – identity, children’s joys and gestures in hardship, isolation, happiness, and fear. My work depicts vulnerability and suggests a longing for protection. The subjects I depict are often from encounters in my personal life and my childhood experiences. The use of my own eyes in most of my portraits symbolizes my wish for kids to see the world as I do. On the other hand, it also symbolizes me, as part of the subjects I choose to depict. A lot of my works are portraits in which I explore the construction of my own identity. I manipulate my medium to unearth new and unexpected creative destinations, while probing the fragility and resilience of my subjects. It is the essence of the human condition to feel emotion, and the challenge of the artist to portray it. I want my audience to not only see the work but feel it.

My current body of work is a series of expressive portraits informed by photographic references, as well as paintings of cameras that emphasize the integral part photography plays in my process. I construct these portraits from a few photographic images and from memory, adding my own realities, emotions, twists, movement, and angles. I combine abstract and realist elements, as I believe life contains both, and that this creates an interesting tension. The portraits are constructed through expressive brushstrokes, drips, and thick layers of paint and collaged canvas. At times the canvas becomes a substitute for paint. Just as I reuse certain images, I recycle paper and other materials.

NN: I am not inspired. I am just trying to heal. I am broken, I am enraged, I am hungry to change narratives and I am excited to create new ones. In Namibia.

C&: Is there anything that you have recognized in Germany which you would like to comment on?

HM:  What I have recognized in Germany is that a lot of people are not aware of history. We continuously need a past to be aware of the present.

NN: I feel there is much denial and lack of acknowledgement of the colonial past, but perhaps even more so of its long-term impacts. German institutions have more progressive resources, programs, policies, and plans for artists, particularly within the context of its colonialism, and yet many German people have no idea of Namibia.

Vitjitua Ndjiharine is a multidisciplinary visual artist who works across various media to develop strategies of deconstructing and re-contextualizing the pedagogical function of texts and images found within colonial archives. Vitjitua is a recipient of the Gerda Henkel Foundation research scholarship, allowing her to work in collaboration with the research center »Hamburg’s (Post-)Colonial Legacy«, with exhibitions at MARKK museum and at gallery M.Bassy in Hamburg.

Hage Mukwendje was born 1990 in Olwiili Okalongo/Namibia. He is a painter, illustrator and graphic designer with a degree in visual arts from the College of the Arts (COTA), Windhoek/Namibia (2011). Combinations of different art forms merge to define his artistic style. His work has been shown at the Bank Windhoek Triennale, the National Art Gallery of Namibia (2014), Windhoek, Sound of Origin, Universitätsklinikum Jena/Germany (2018), Kammerabend, Semperoper Dresden/Germany (2018) and Silent Auction, Franco Namibian Cultural Centre (FNCC), Windhoek (2019). In 2014, he was awarded the Merit Award within the framework of the Bank Windhoek Triennial. Additionally, he placed first in the Art Battle Namibia competition at the Franco Namibia Cultural Centre, Windhoek, in 2018.

Nesindano »Khoes« Namises was born in Windhoek/Namibia in 1988. She is a poet. She combines her poetry with afro-folk-funk, neosoul, voice and acoustic guitar in a collaboration with C. Polloni. Since 2010, she has co-organized Spoken Word Namibia, a growing platform for performance poetry in Namibia. She has a background in radio and marketing, and has worked on air and as a producer at Planet Radio (2011), 99FM (2012/2013) and as a copywriter with Trustco Group (2014–2016).