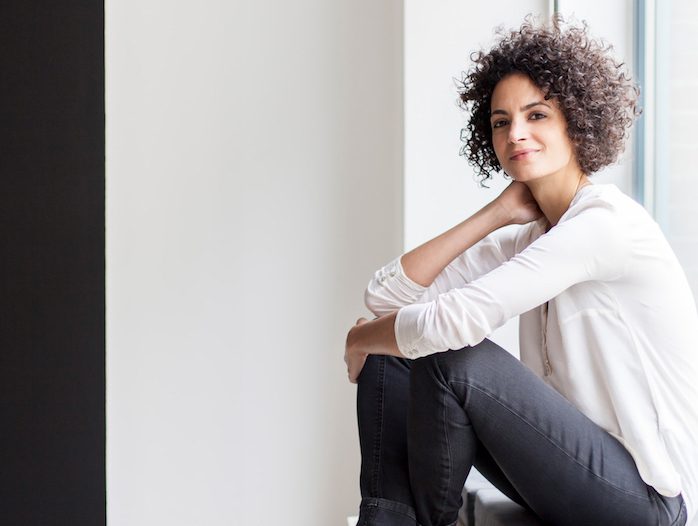 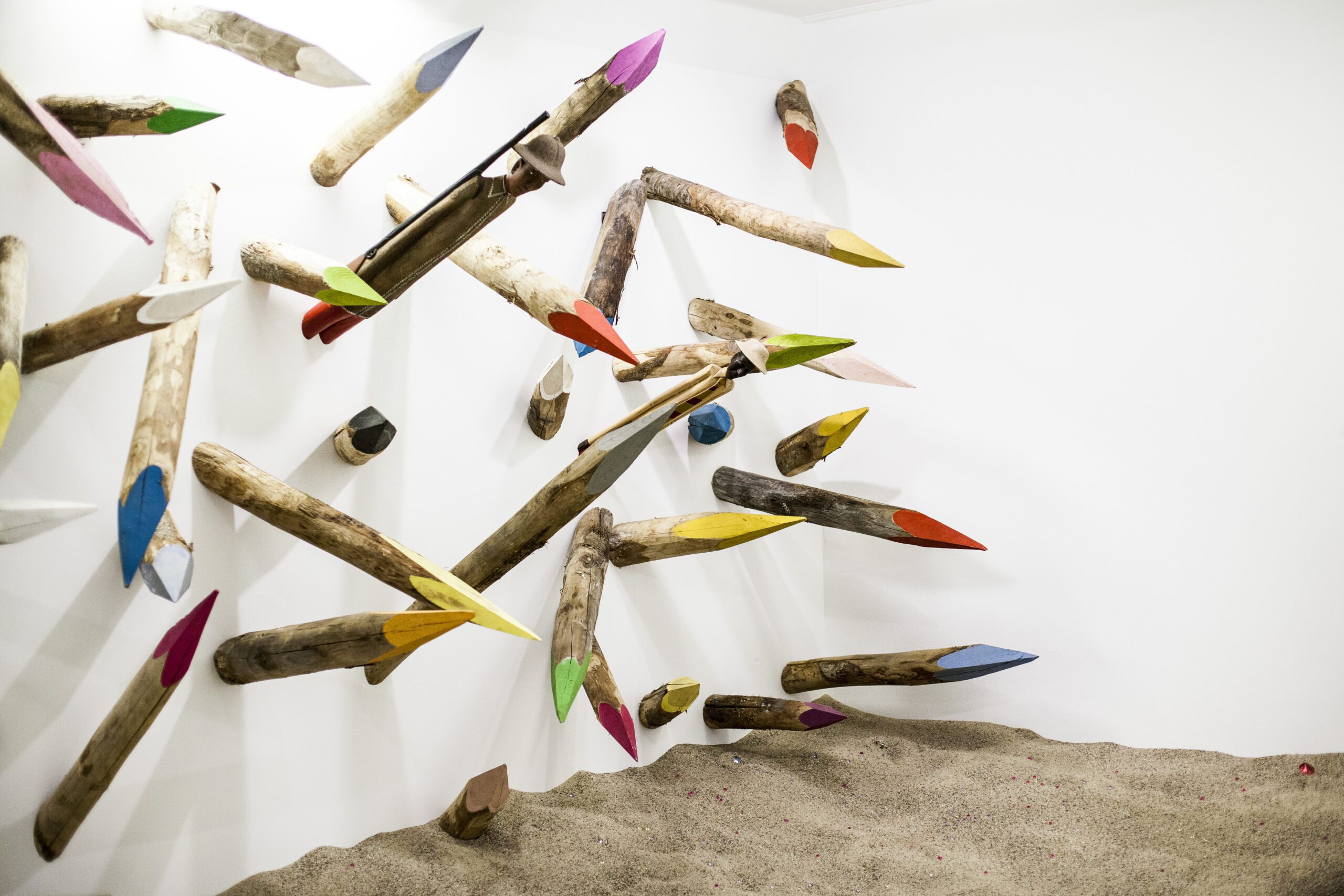 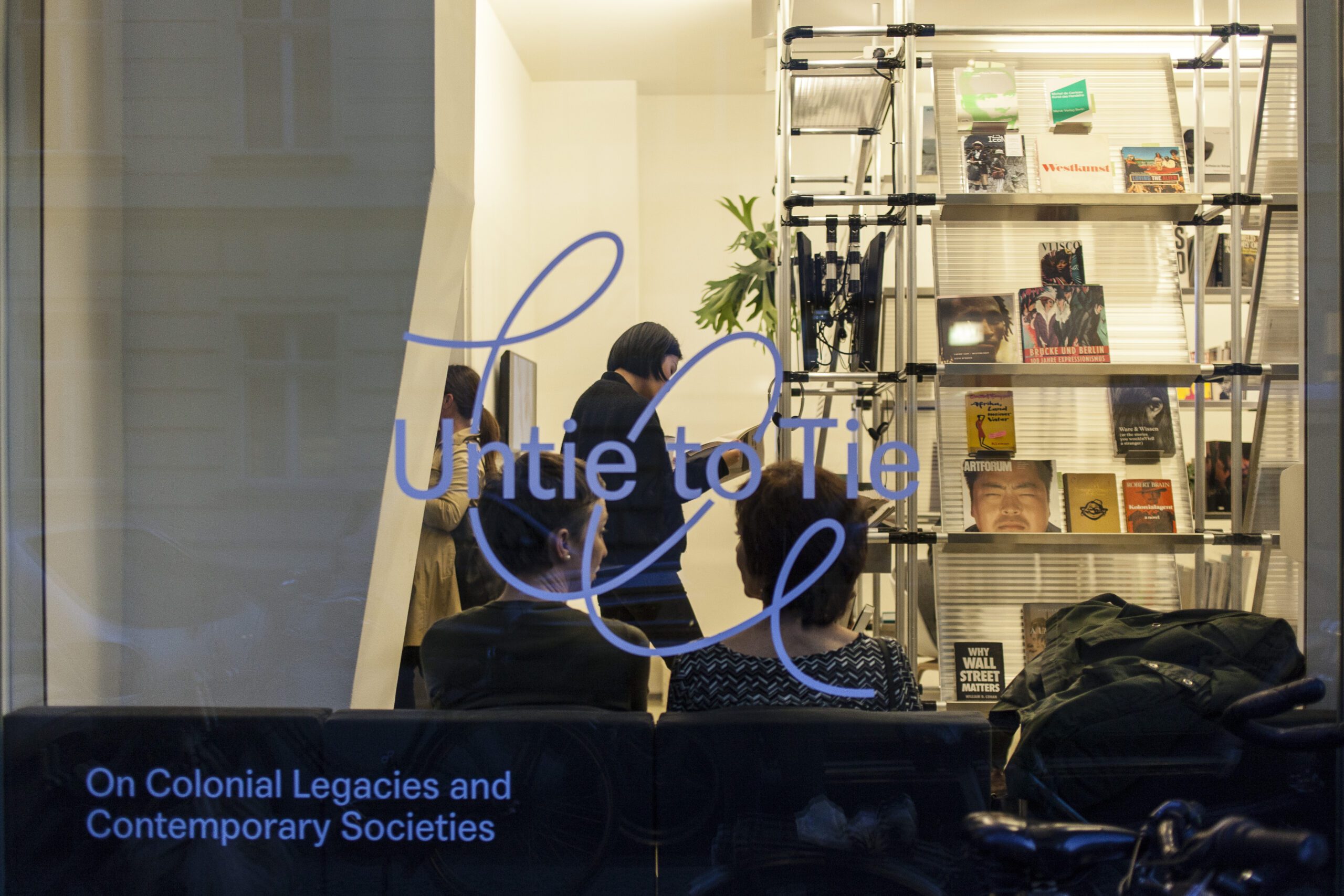 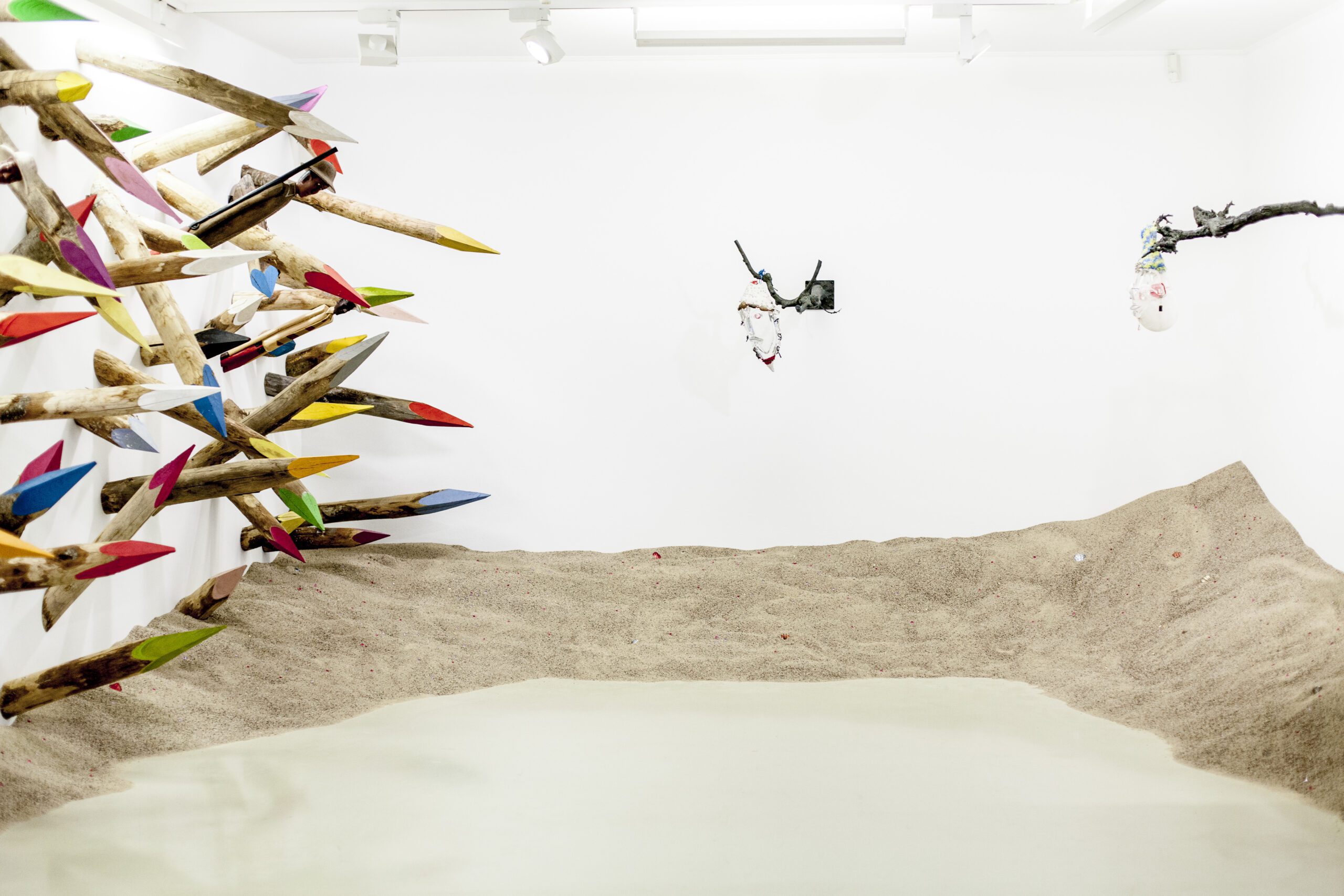 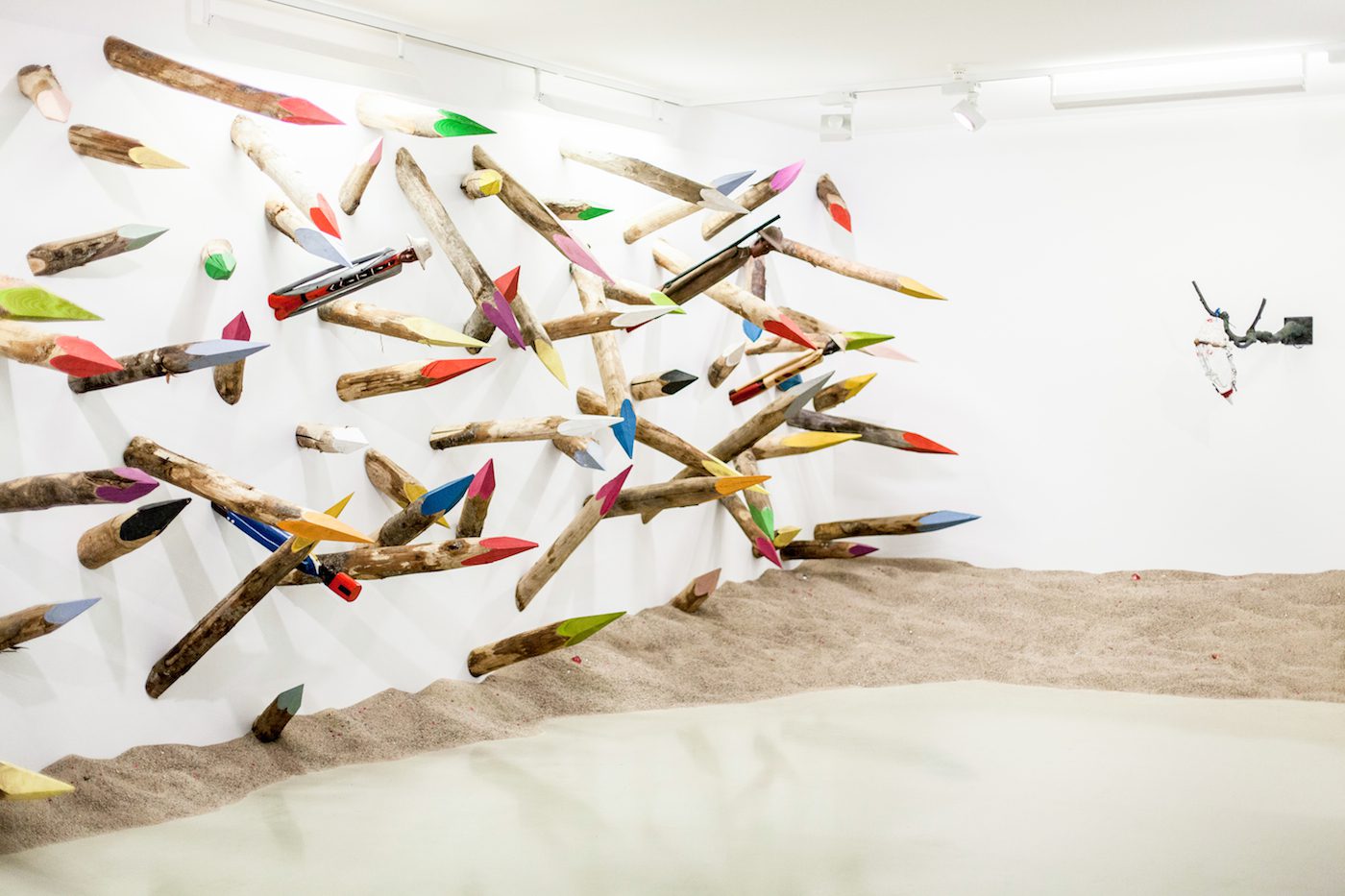 Our author Elsa Guily met up with Alya Sebti, the director of the ifa Galerie Berlin, who unveiled the 2017 curatorial season UNTIE TO TIE for us.

Our author Elsa Guily met up with Alya Sebti, the director of the ifa Galerie Berlin, who unveiled the 2017 curatorial season UNTIE TO TIE for us. Sebti explained the importance of this concept in her curatorial vision as a way of escaping the hierarchies of knowledge and representations inherited from the colonial system. She pays tribute to Glissant’s ideas, which are helping to make the ifa Gallery a whole-world constellation that celebrates social, political and cultural alliances, both in the local Berlin scene and internationally.

Elsa Guily: What story is hatching behind the title UNTIE TO TIE?

Alya Sebti: I was inspired by Sheila Hicks’ saying, “I tie notes and I untie them.” This idea of untying allows us to deconstruct. To tie means to unite, to recompose and link things, but also to respect differences without glossing over them. The title comes from a  Japanese  art  form which involves  repairing something by putting in a gold seam that leaves scars from cracks or breaks visible while reconstituting the whole. The  project  of tying tends to deconstruct so as to open things up again. It’s like when you cook, the challenge is to mix flavors so that their taste comes through at the same intensity. To tie also carries brutal overtones but the project does not do anything lightly: it questions the violence of representations, of hierarchies deriving from colonial heritages.

AS: In the first phase the challenge is to question the different amnesias, the silences and the pre-existing historical conditions around this colonial question and then to prevent it being bracketed off in terms of time as if it were something from a bygone age. We are still living with the impact of the colonial division. The structural racism of the state, as well as its institutionalization, still persists on the unconscious collective scale in our ways of thinking about and judging the world around us. The word ‘heritage’ in the curatorial concept is there to show that there is a beginning but not yet an end and that this is the point where we have to work together. On the epistemological level the word heritage is enclosed by the past and the idea of possession, which is something I want to break down. This project is trying to create an archive of the future, developed thanks to the digital platform. The objective is to anchor evolving memories in the present with a vision of the future. 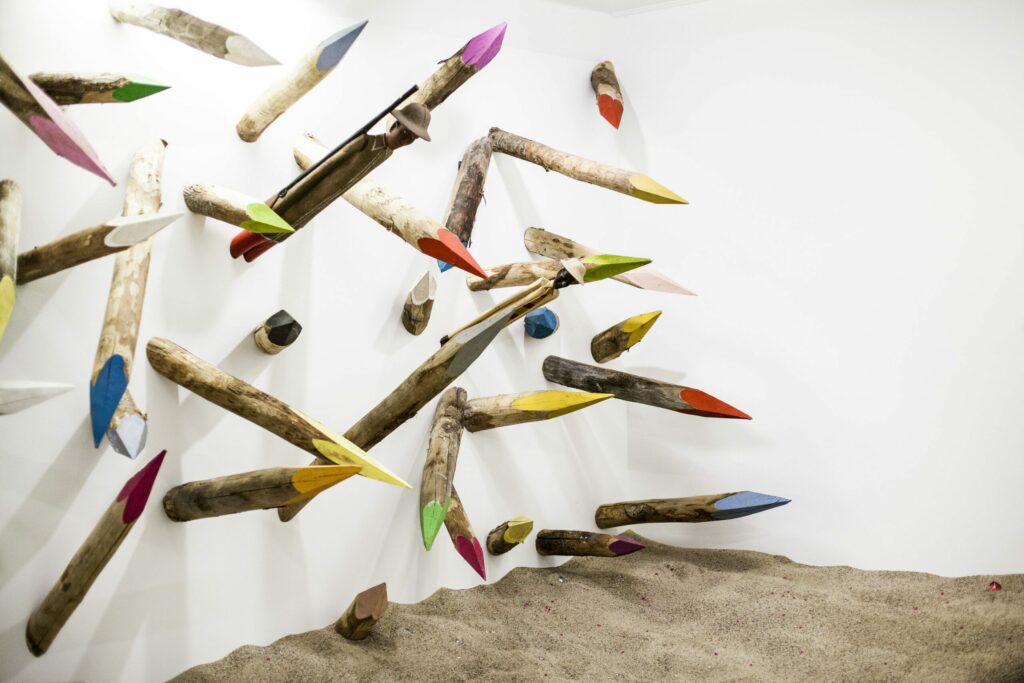 EG: How does each section make its own link between this critical thinking about the colonial heritages and our contemporary societies?

AS: The first section, Kolmanskop Dream relates Glissant’s thought to the work of Pascale Marthine Tayou. We start out by presenting Edouard Glissant’s tout-monde (whole-world) idea, to support programming that aims at a transregional approach, in which the present encompasses the past and the future. We are partnering with the Institut Français and the Marc Bloch Center to coordinate a series of encounters around literature that will provide elements of critical response to the question of modernity. Based on Walter Mignolo’s idea that there is no modernity without coloniality, C&’s Center of Unfinished Business will present a meeting at ACUD around the launch of his book.

The second section will highlight the phenomena of urban cultural expressions through clothing, music, dance, and language, as a reaction to the colonial heritage. The guest curator is Marina Reyes Franco, who will look at the topic of tourism, among other things. Alex Moussa Sawadogo, the creator of the Afrikamera festival, will have a free hand on the topic of Congolese rappers and hip hop. The third section focuses on Feminisms with guest curator Eva Barois de Caevel presenting a solo performance by the artist Wura Natasha Ogunji. A film screening will be dedicated to women involved in liberation movements but whose names have been eradicated by history. The fourth section will be innovative, with a group exhibition curated by Natasha Ginwala: On riots and resistance, questioning the phenomena of riots that are very often condemned by the authorities and the media as a way to marginalize and stifle them. 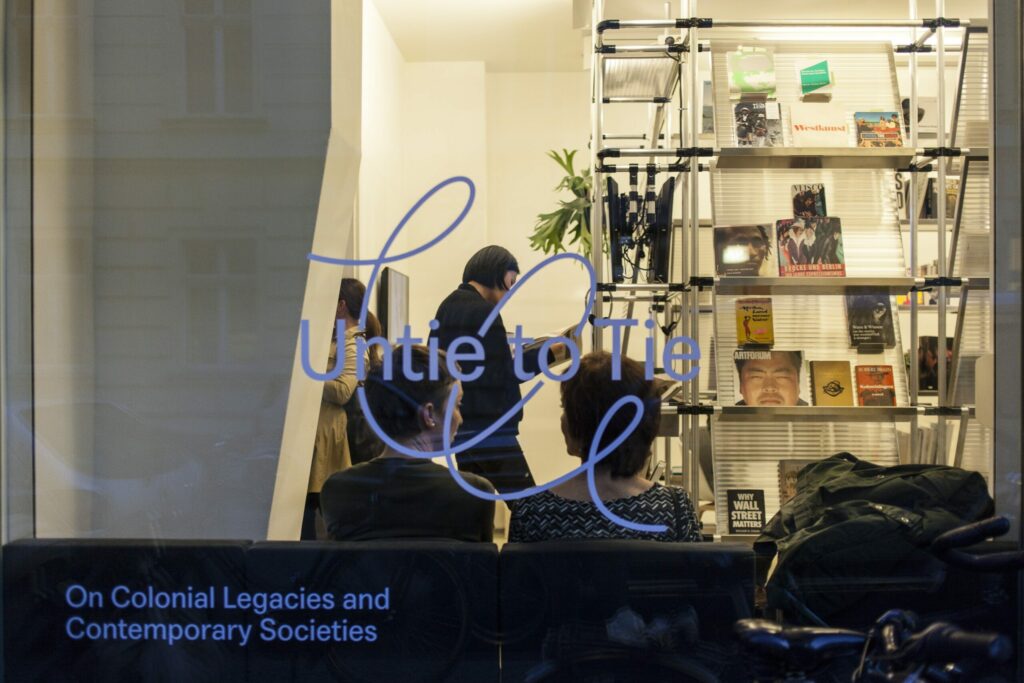 EG: The project UNTIE TO TIE stands on three pillars: Artist in conversation, Meeting rooms and the digital platform. How does that help you to set up a critical constellation?

AS: The idea is to experiment with formats, to decompartmentalize as far as possible and to play with the multiple ways of reaching a big audience. The whole thing exists in a state of organized chaos, rejecting a single voice and favoring polyphony. The sensory level, with the exhibitions in the gallery, experiments with the sensual relationship beyond the visual with sound performances and culinary interventions. The discursive level will develop around the Meetings rooms and Artist in conversation encounters, in which the artist’s or performer’s position presented in the exhibition will resonate with a public program created by external guest organizers. These discussions will continue thanks to the documentation on the digital platform. Every section will be given Meeting rooms. One part, the Center of Unfinished Business organized by C&, will offer the public texts, books etc. to look at on the spot. The other part, the Hearing station organized by Saout Radio, will propose a series of podcasts around the topics of each chapter, created in collaboration with the artists. Finally, the section on art and education led by Annika Niemann in collaboration with Claudia Hummel and her students from the Berlin University of the Arts (UdK) will develop an educational tool for students to tackle the colonial German past.

EG: What is actually the particular richness in the sound dimension that allows the formation of alliance and resistance to combat colonialism?

AS: Orality is a key position that must be supported. SAVVY has been working for years around the issue of the unwritten. They were the first in Berlin to express the very obvious reality that things that happen are not necessarily written down but circulate by means of experiences and encounters. I am fascinated by the potential of orality to reactivate realities. I think it is important to recognize that writing must have its counterpart, which is oral. The program of the Hearing station is dear to my heart because it is an integral part of this continuity, giving value to sonority as a tool of subversive contamination. I have been developing this position since 2011 thanks to our collaboration with the artists of Saout Radio, Younes Baba Ali and Anna Raimondo, with whom I worked during the Marrakesh Biennial in 2014, beginning with sound intervention in public space around the oral heritage of Jamaa El-Fna Square.

EG: Is that really the role of the curator?

AS: I value experience far more than theory, and intuition far more than academic knowledge. These are the encounters that guide things. The curator is the moderator, the translator, between the artist and the audience, and with institutions or not. It is this permanent translation process, the social linkage in between things that stokes my passion!