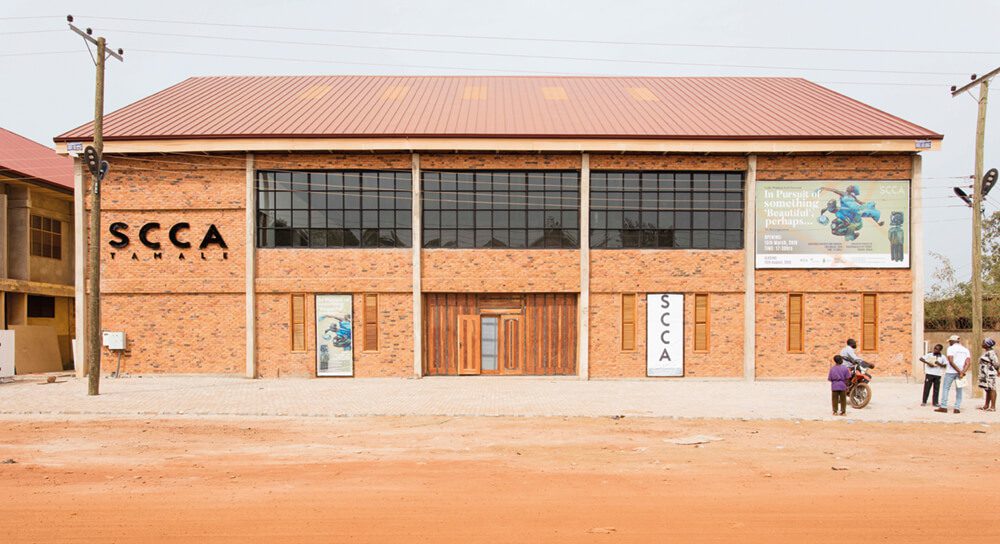 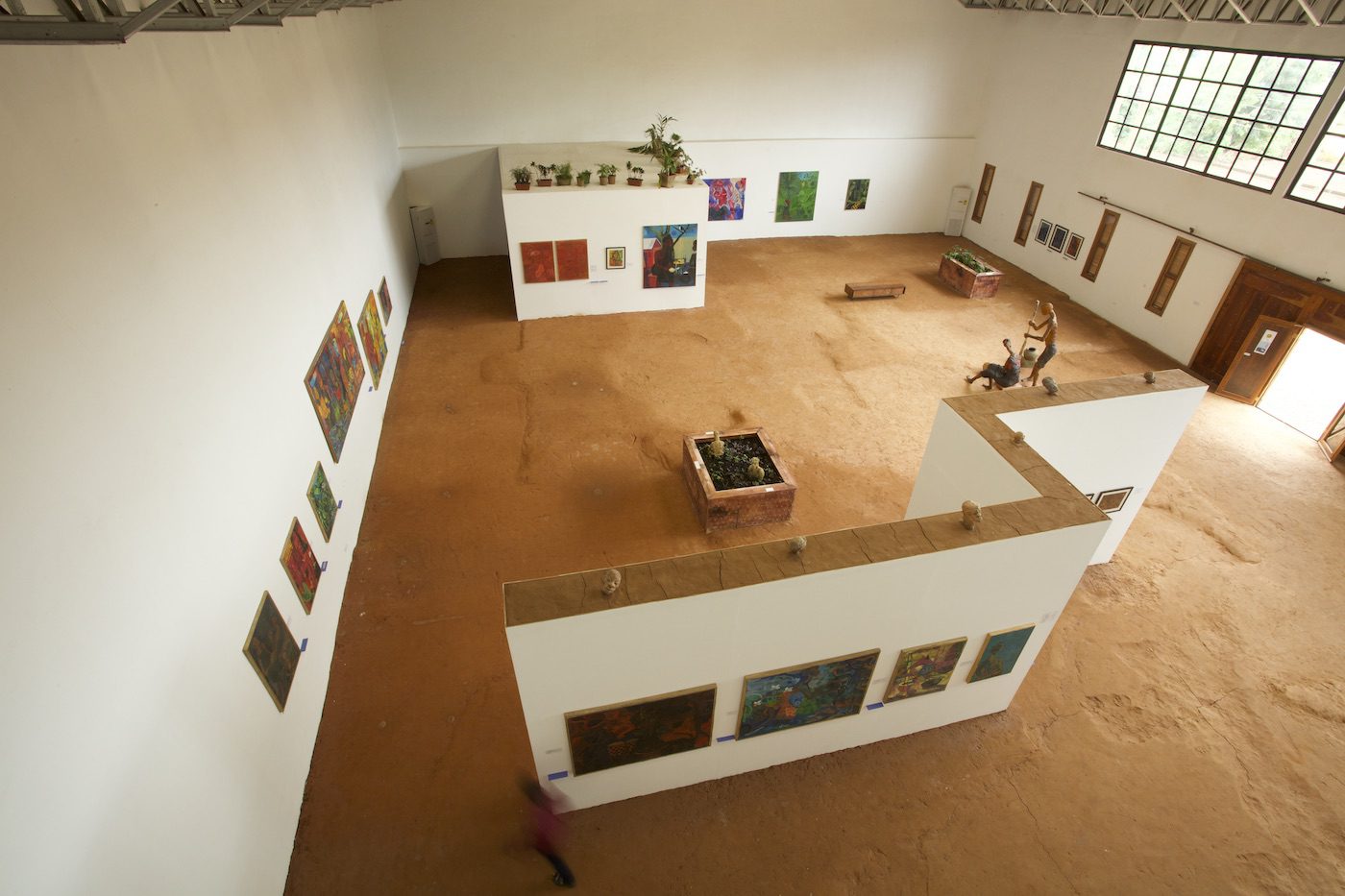 Exhibition layout of “Akutia: Blindfolding the Sun and the Poetics of Peace”, 2020. Photo: Elolo Bosoka

Exhibition layout of "Akutia: Blindfolding the Sun and the Poetics of Peace", 2020. Photo: Elolo Bosoka
2/2
2/2

The number of artists from the African Diaspora who enjoy considerable success in the international art scene has rocketed in the past years. Many of these artists have also chosen to invest back into the continent by founding art projects, from residencies to institutions. We highlight some of these in this series, Giving Back to the Continent. For this episode, it is the project space Savannah Center for Contemporary Art in Tamale, initiated by Ghanaian artist Ibrahim Mahama in 2014.

Contemporary And: When was the moment that you thought, I really want to do this – or was it something that gradually built up in your psyche?

Ibrahim Mahama: The foundation of the building itself started in February 2014, but the idea of creating it had always been there. Recently I was going through my archive, and I remember when I was in high school, at the age of fifteen, I started collecting paintings from some street painters around the region where I studied, the eastern region. It was interesting for me to look back to that time, just over half of my age ago, when I was a boy collecting these street artists and the paintings they were making. I thought the paintings were so interesting – that defined the culture at that time as well as the artistic practice of street artists. I was trying to find ways to immortalize them. And when I went to university, though I was interested in painting, I was also interested in what could evolve beyond the painting medium. That was one thing we were introduced to as students, to always try to find ways in which you can stretch or expand the form. It doesn’t necessarily have to be always something which just comes in the form of an object – it can come in the form of an event or maybe architecture or whatever it can be.

Everything became clearer during my MFA [at Kwame Nkrumah University of Science and Technology, Kumasi], when I started practicing more seriously as an artist and finding my voice. We studied a lot of theory (such as Karl Marx and Walter Benjamin), so understanding the form that art came with and how that somehow translated into capital and what happens when that capital goes back into the roots of the underlying conditions of the space or community that you find yourselves in. So that’s how I started building the Savannah Center for Contemporary Art (SCCA), actually concretizing a space and then eventually having all the conversations with students and colleagues alike. We realized that it was important to institutionalize and turn it into something that would begin to pull things together, and that’s how everything started. As I keep working practically on things, working on my own, making objects as an artist going back and forth, it always informs the idea of how the institution started expanding.

C&: The concept of the architecture and building is embedded in the local natural environment and tradition.

IM: Historically, clay has always been used. If you travel around Mali, Burkina Faso, or Senegal, they use a lot of mud in building, but architects have always lacked a sensitivity toward it. I was interested in the buildings that were built within the colonial period, the pre-colonial period, the independence period, and the post-independence period, including buildings constructed with those techniques. Sometimes it’s just maybe the way they cast the concrete. I am always trying to find ways in which you can take one thing and work through it, think about it sensitively and how it would react to a different material or a different condition. I have borrowed from very diverse systems, not specifically the traditional – but the traditional has been important because, when you look at these materials they used to build with, they are a lot more sensitive. So how do you borrow something that comes from the tradition of using concrete but translate it into a local material? Or sometimes you even just maintain that material to make a different sense, to create a new meaning.

Exhibition layout of “Akutia: Blindfolding the Sun and the Poetics of Peace”, 2020. Photo: Elolo Bosoka

C&: In terms of the organization of the institution itself, was there something you modelled the SCCA on? And how is it curated?

IM: We’re affiliated with blaxTARLINES KUMASI from Accra. There is also so much we learn from the local community. While internationalism means that curators are constantly looking at, say, the best production team that can make things happen, we have always worked with locals in order to make something work, no matter how much difficult the conditions are. We have to use the conditions themselves as a way of escape, as a way of creating. That is the model, but of course, as an artist travelling around the world and doing all of these international exhibitions, I also learn a lot from looking at how curators work, the decisions they make, how institutions work, how they make decisions around exhibition forms, how artists respond to those, looking at the failures and crises within that, but also just looking at the context of our own community. How that could come together to create an institution that could allow for a lot more freedom in making decisions.

C&: Could you tell me about the funding structure?

IM: There is no funding structure. I fund everything from the work that I sell as an artist.

C&: Children are a major focus of the institutional program. Could you tell me more about the pedagogic methods that you use?

IM: It’s based on the motto that an ignorant person can teach another ignorant person what that person doesn’t know. First of all, I don’t see children as people who are totally naive about art. I see them as people who have an interest in whatever they are doing, and it might not be art. Whatever they’re interested in, it’s up to them to be inspired by it. I don’t think about it in terms of them becoming artists as such, but as people who could become custodians of Ghanaian culture, and influence decisions relating to Ghana. Because the art of making or drawing is about decision making. Some of them are quicker and some of them are slower, so the instant is as precious as the long term. I try to articulate in my discussions with them, to learn from them, but there is an element of play that I am interested in. If play is seen as a way to articulate thoughts which are outside the classroom, this can be relaxing and things can come out instinctively without a formal structure.

C&: What kind of children do you work with?

IM: They’re aged between seven and fifteen. Every day local school children come to use the library and space. The schools inform their students and colleagues to come around and see the show. And some of them participate in a workshop later on, out of curiosity.

C&: What would you say were the main challenges so far and surprises?

IM: With the schools there is a little bit of bureaucracy, because the information to the school has to pass through the educational service and sometimes it can take quite a long time. And you need to inform the school two weeks before the program, and delays affect your program. Some of the surprises: I was shocked by certain things they came up with. Some of them were not that “arts inclined,” but after they came around they not only showed interest but also came up with surprising takes on it.

The writing aspect is something we want to develop with the students, because writing should be something you encourage students to do. We need more writers, writers in art or writing critically about art. It’s about slowly grooming them. Not in the sense of “No, you are going to be a writer!” But encouraging them, like, “You have a good perception about things and the way you articulate it is not quite as good – why don’t you take writing a course?“

C&: In which capacity have you worked with children before? Do you see friction when you put children from different schools together?

IM: The pupils from the international schools, the private schools, and the public schools study together. We make sure that we mix them. Initially when they come together, some of them, not all, feel more comfortable. Kids from the public schools tend to be shier. We try to encourage the kids to learn from the person sitting beside them.