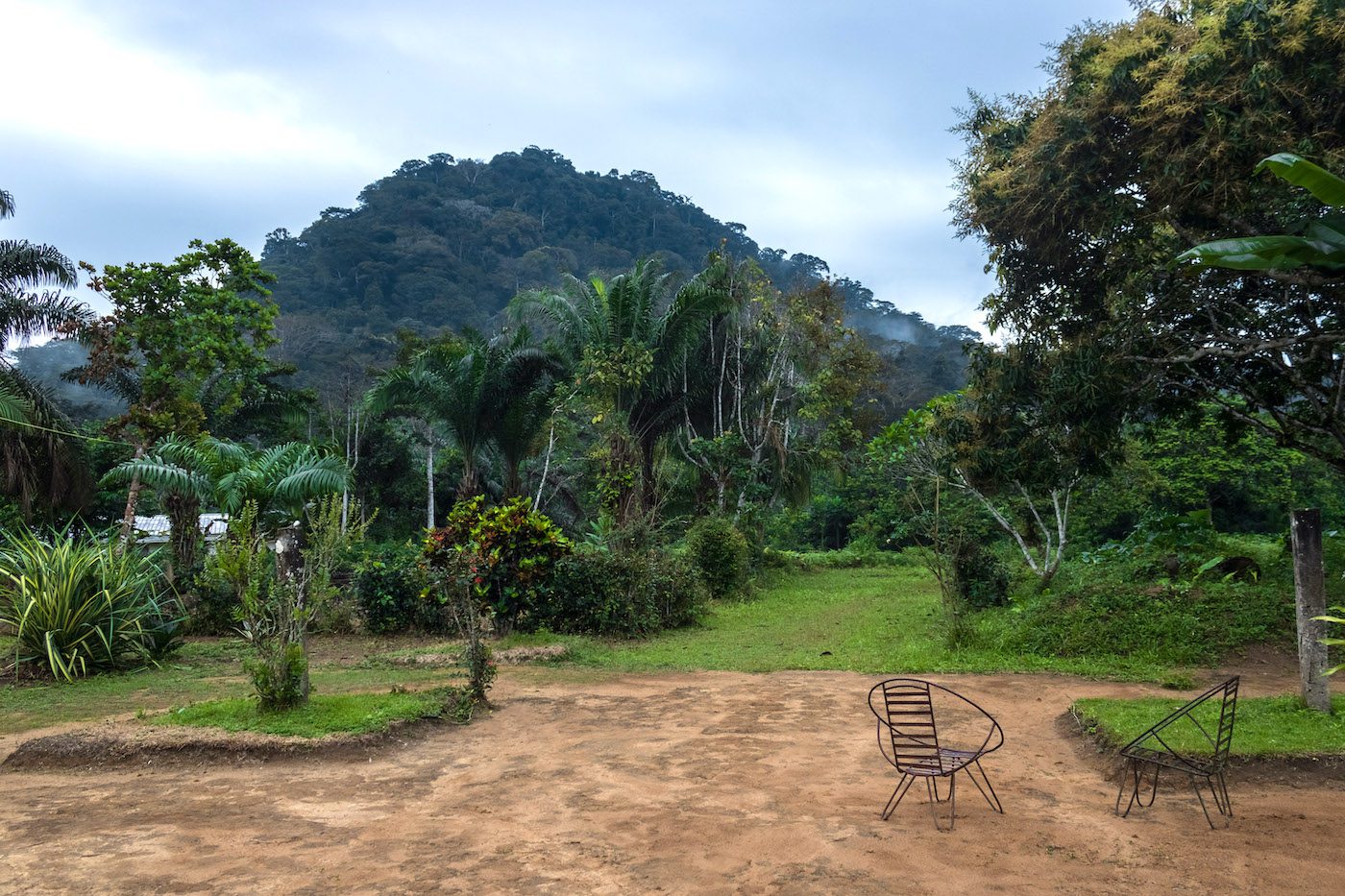 View of Mount Mbanga from Eyene’s garden in Bikoka, on the land where Bikoka Art Residency will be built. Photo: Yvon Ngassam, 2021.
1/7
1/7 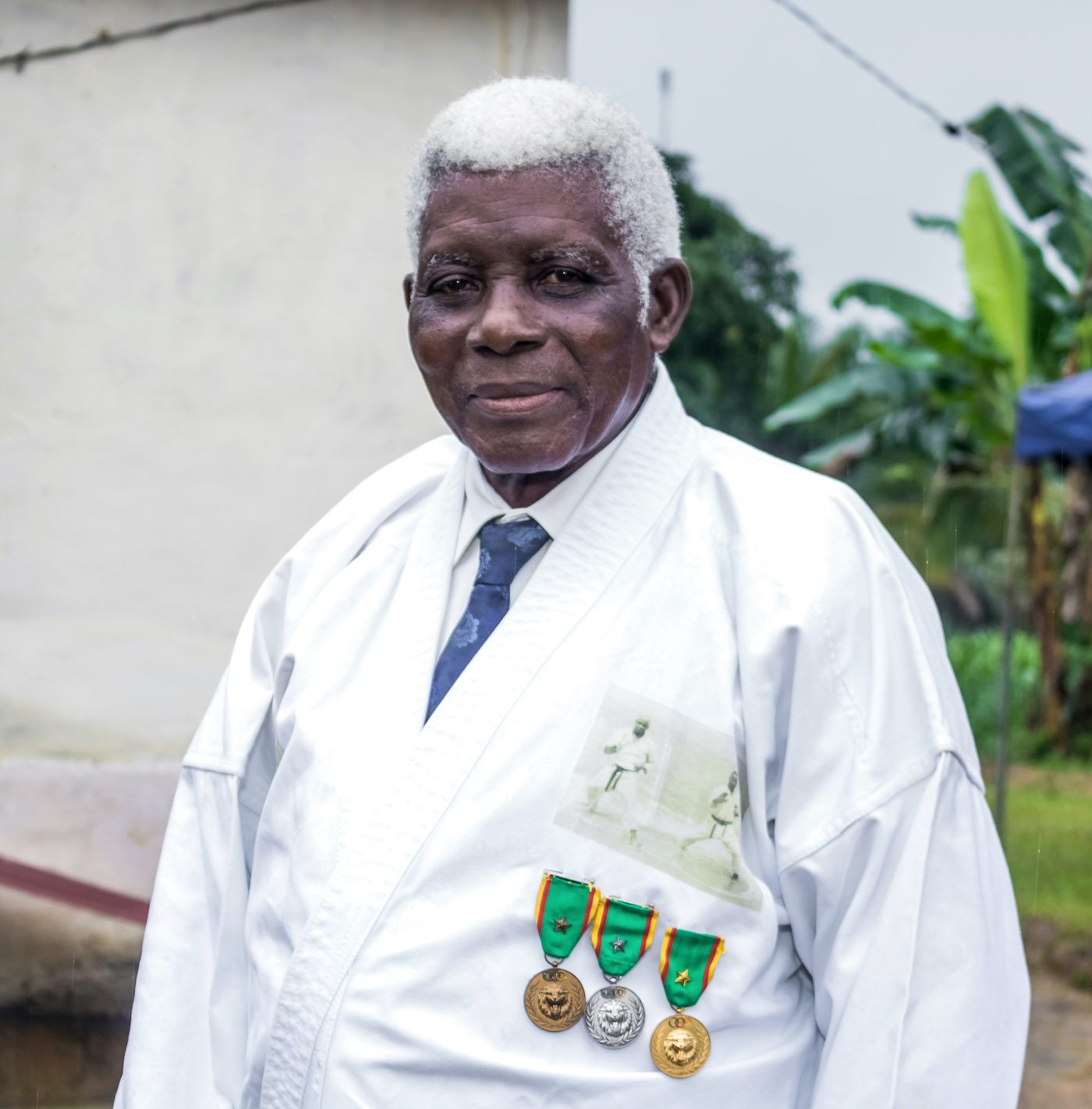 Master Eyene at his 80th birthday party, wearing his Karate kimono with medals, a few weeks after being officially decorated Commander for his contribution to Karate in Cameroon. Photo: Yvon Ngassam, 2021.
2/7
2/7 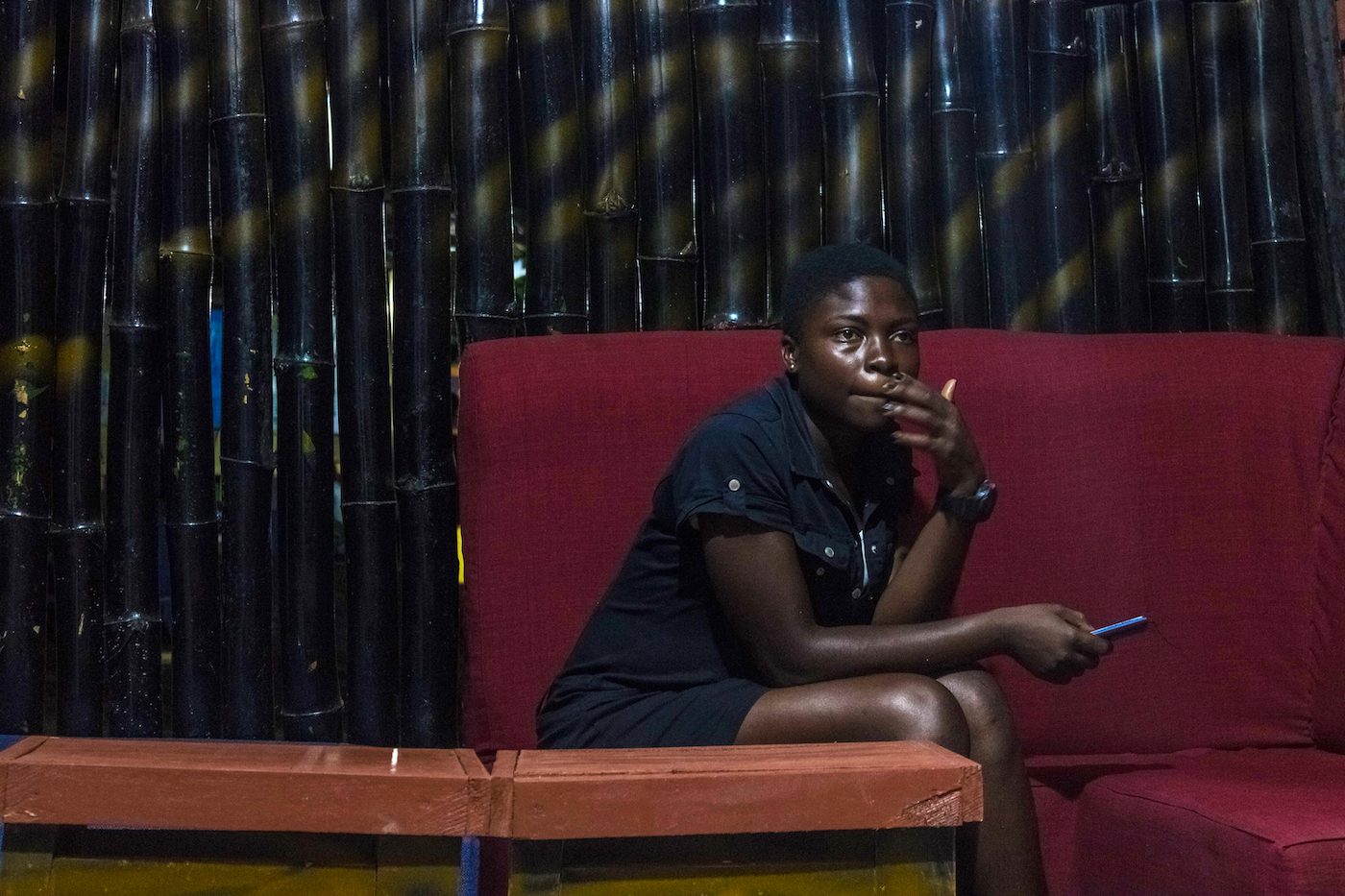 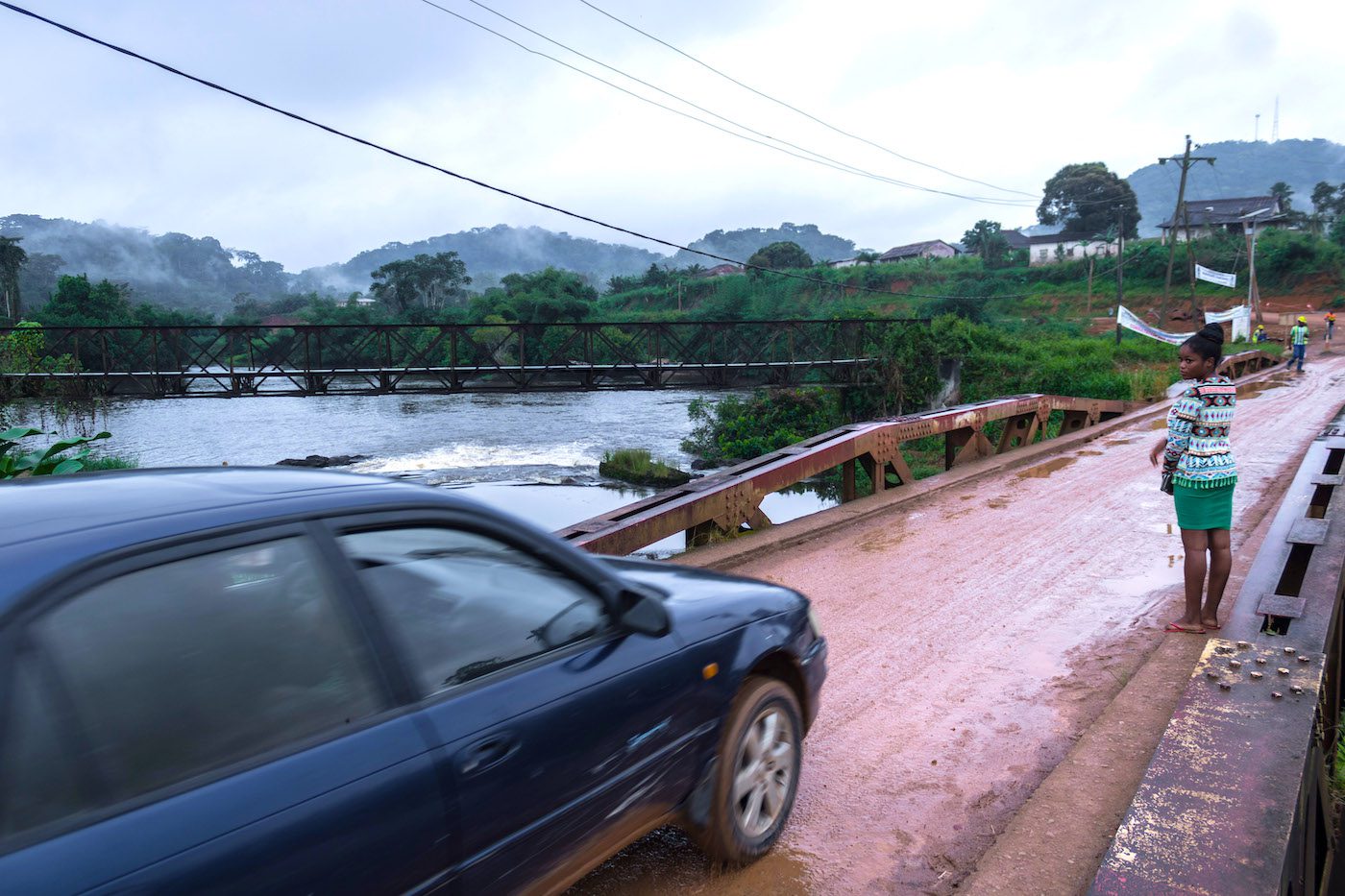 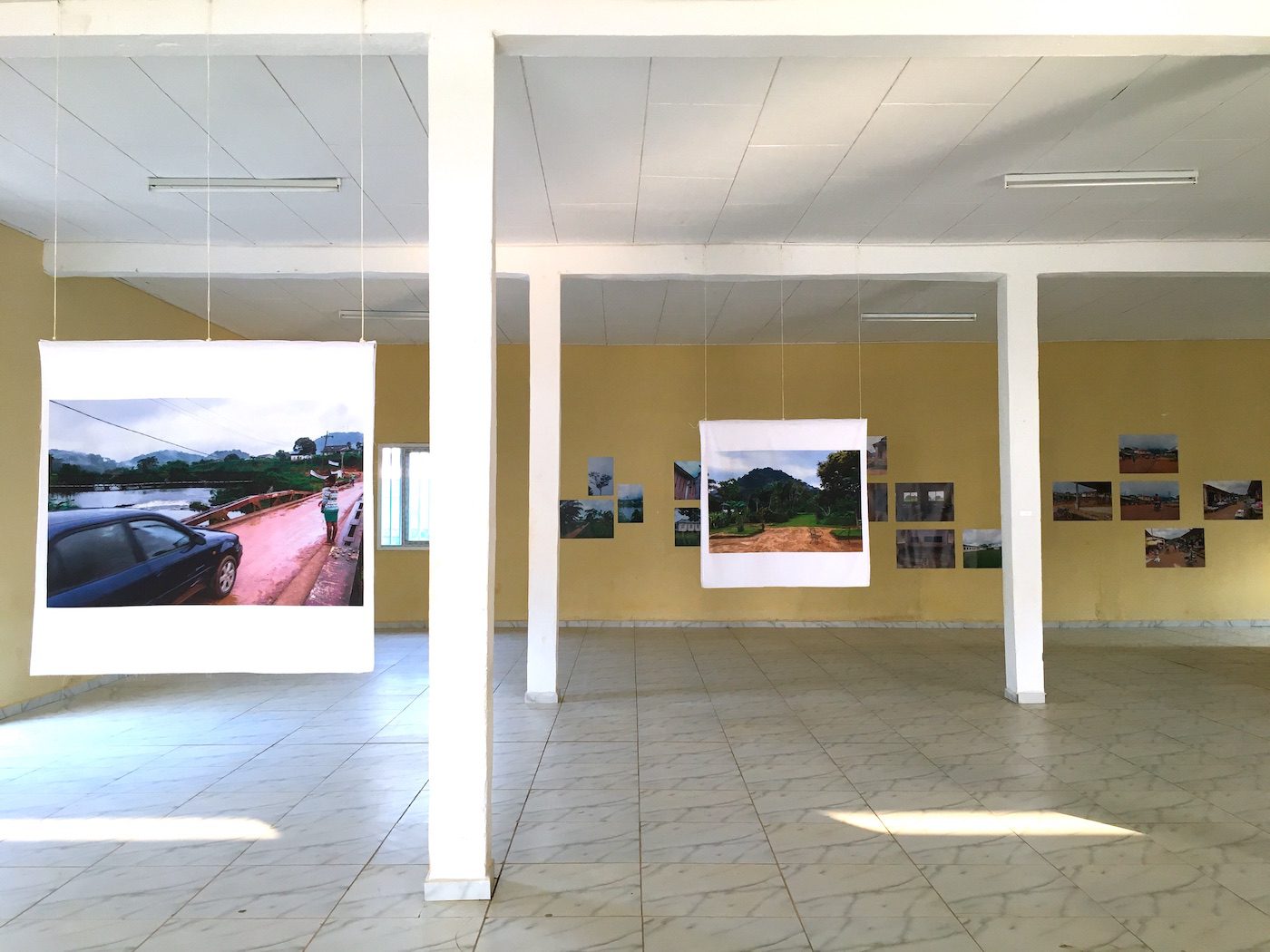 Portrait of a Community – Features of a Land, exhibition view of Yvon Ngassam’s exhibition at the Municipal Foyer, Lolodorf. Photo: Christine Eyene, 2022.
5/7
5/7 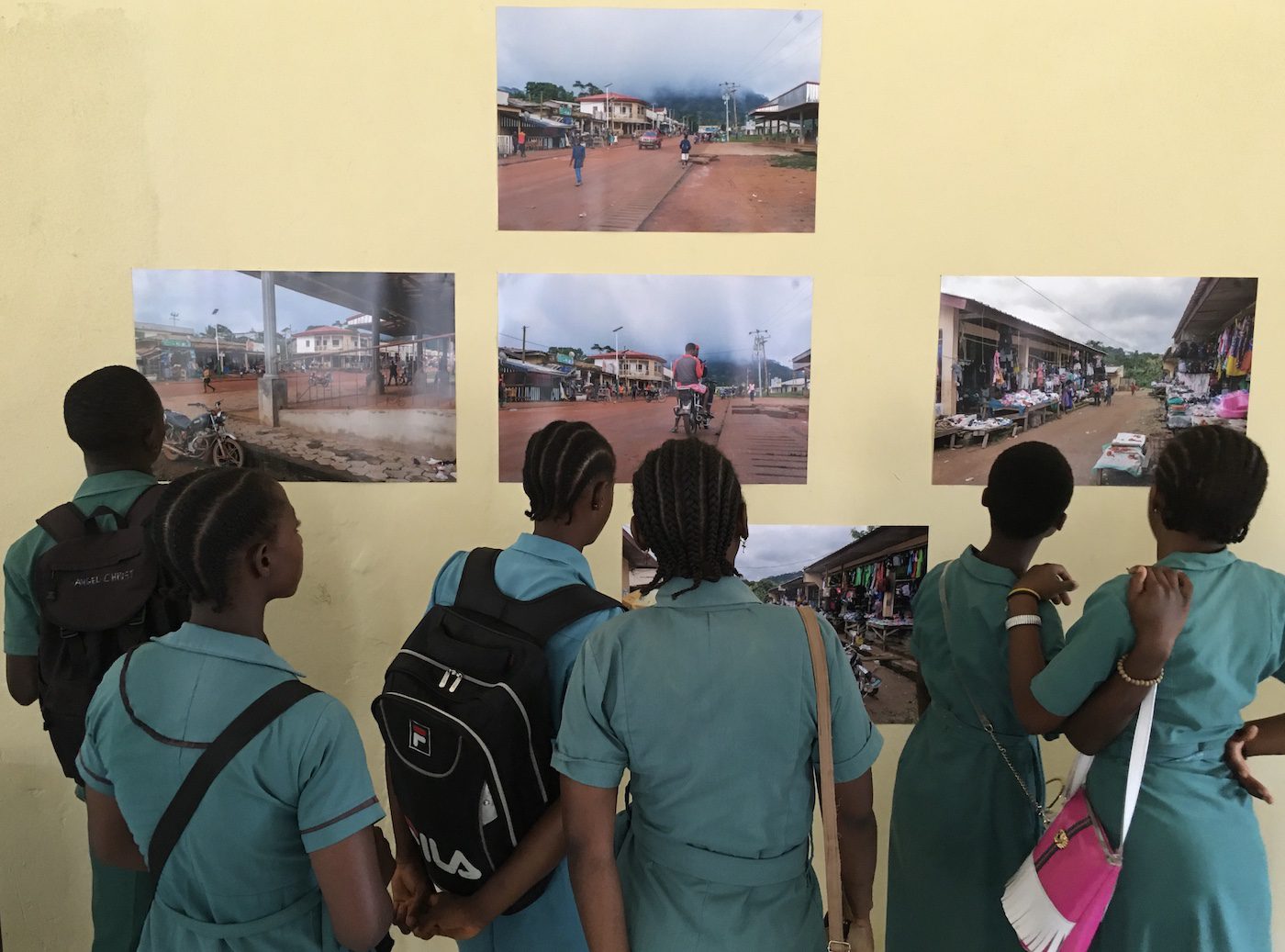 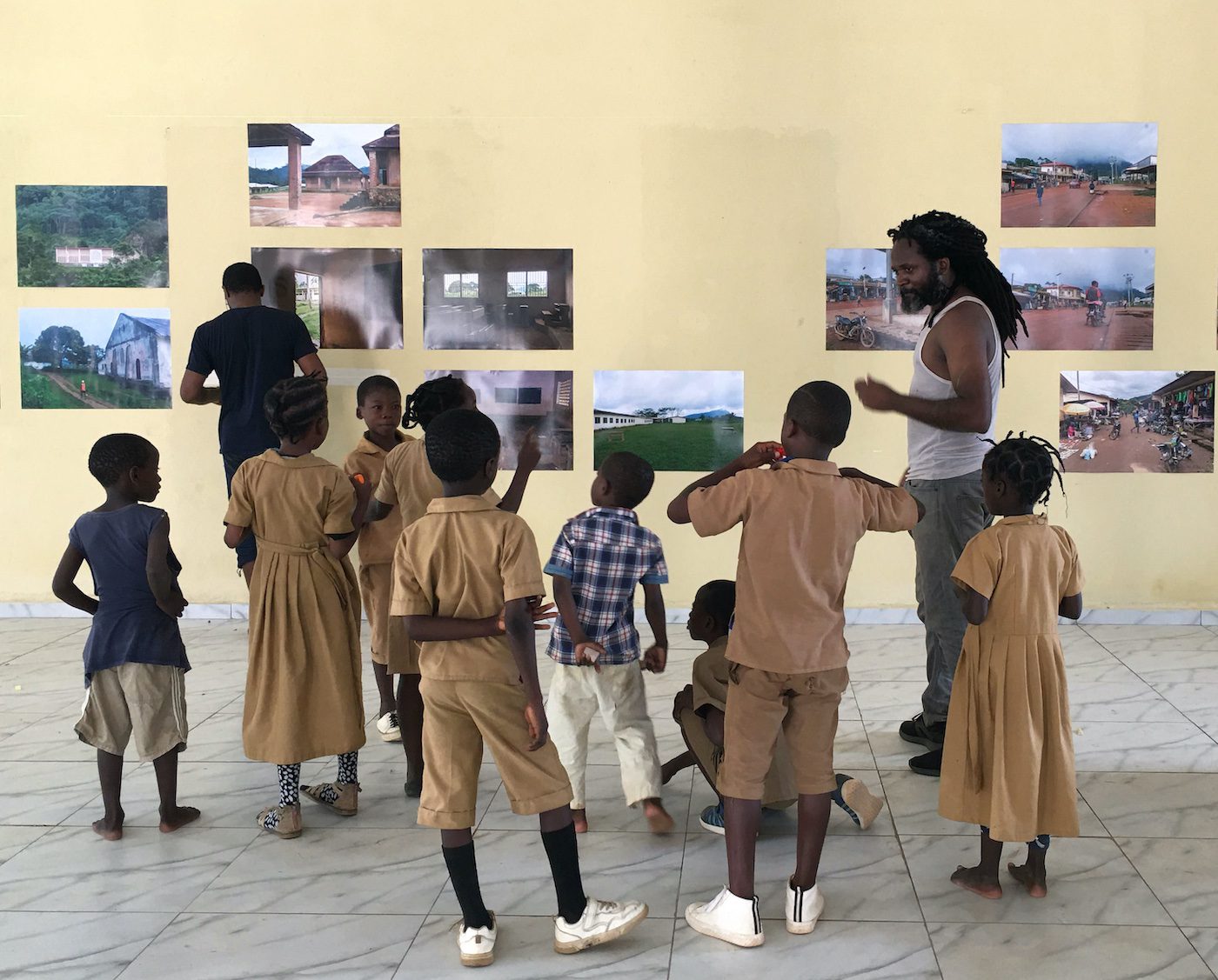 Bikoka Art Project: A New Art Initiative in the South Province of Cameroon

We talk to Christine Eyene, curator and initiator of the contemporary art project founded in 2022 in Lolodorf, Cameroon.

The number of African Diaspora art practitioners enjoying considerable success in the international art scene has rocketed in the past years. Many of them have also chosen to invest back into the continent by founding art projects, from residencies to institutions. We highlight some of these projects in this series, Giving Back to the Continent. This time we introduce Bikoka Art Project, initiated by London-based French-Cameroonian curator and art historian Christine Eyene.

Ever since reconnecting with her 80-year old father who lives in Cameroon, Paris-born curator Christine Eyene has had the desire to start an art initiative in his hometown of Lolodorf. Inspired by his engagement in the local community as President of Lolodorf Patriarchs Association who are preserving Lolodorf’s history and traditions, and the energy of Lolodorf’s youth, Eyene decided to develop an art project on her family’s grounds. Located in the south province of the Republic of Cameroon, Lolodorf is a town with around 22,250 inhabitants. Careful to connect with the local community, Eyene who frequently visits Cameroon and in 2016 co-launched YaPhoto, wants the project to grow organically and has teamed up with the city council to develop activities together. In this interview Christine Eyene tells us more about the development of Bikoka Art Project so far.

View of Mount Mbanga from Eyene’s garden in Bikoka, on the land where Bikoka Art Residency will be built. Photo: Yvon Ngassam, 2021.

Contemporary And: How did the idea for the project come about?

Christine Eyene: The idea for Bikoka Art Project developed in 2020 during the pandemic. Losing the South African photographer George Hallett who was my mentor when I was in my teens and twenties and seeing friends losing loved ones made me think of my father from whom we were separated as kids. He lives in Cameroon and we have never had much contact. I wanted to reconnect with him. We were communicating via WhatsApp during the pandemic and in our conversations he was talking about the potential for the local youth in Lolodorf where he lives, the local community activities he was developing, and plants. That is something that stuck to my mind

At some point in 2020, at a dinner hosted by Anjalika Sagar from The Otolith Group, I was casually talking to Alon Schwab and Daniel Fernández Pascual from Cooking Sections about my dad’s garden and the plants (a topic that interests them) and how maybe I’d love to develop a project around plants in Cameroon.

Later that summer, Cooking Sections invited me to contribute to their project Moving Plants that they developed with curatorial students as part of the Goethe University’s Curatorial Studies programme. The exhibition took place at the Palmengarten in Frankfurt, and my contribution consisted in a recorded audio piece intertwining the German and French processes of extraction in former colonies such as Cameroon, the legacy of colonisation, and metaphorically how on a personal level the diasporic seeds resulting from migration expressed a longing for their original soil.

To me there was a connection between the Palmengarten, the palm oil industry that was developed during colonisation, and the palm trees in my father’s garden. Which is all the more important as big international corporations are still seeking to exploit our land in Cameroon.

In order to find a way to connect with my father, I proposed to support his local initiatives through a creative project that could organically embed itself within his environment.

I also did a lot of research on Lolodorf and drafted a project proposal that responded to the official Communal Development Plan of Lolodorf (2013-2020) in which the local authority identified needs in terms of education, creativity, innovation, and also socially. I wanted to make sure that my proposal connected with a local reality.

Master Eyene at his 80th birthday party, wearing his Karate kimono with medals, a few weeks after being officially decorated Commander for his contribution to Karate in Cameroon. Photo: Yvon Ngassam, 2021.

C&: How well do you know Lolodorf?

CE: Lolodorf is where my family is from on my father’s side. My grand-parents are buried in its soil, my father was born there and continues to live there in one of Lolodorf’s boroughs called Bikoka.

Lolodorf is also an interesting city in that it kept the name that was given by the Germans in 1886. To me it’s both home and a place that lends itself to historical research not just along the lines of the German then French colonisation, but also in relation to history before colonisation. I am interested in local traditions, ancestral knowledge around plants, and also our musical heritage.

CE: At the moment, I am funding Bikoka Art Project through my curatorial platform Eyonart. It’s important for me to do that, to test out the project’s local and intellectual relevance, and its sustainability. We’re also launching a limited edition of prints by Cameroonian artist Yvon Ngassam who is kindly donating the first print of each edition to Bikoka Art Project in support of the next artist commissions and workshops. I think it’s less and less uncommon for us as Africans who work in the arts to be self-sufficient and to reclaim our agency through projects that we develop with our own means. That’s my plan for the first two years but I am already developing local and international collaborations, and there is more to come but that will be announced in the coming months.

C&: Could you tell us more about your mission to support young people and women in relation to your planned programming?

CE: I have drafted a two-year programme that includes artists commissions, initially focusing on Cameroonian artists across multiple artistic disciplines; creative workshops for local youth and women; and the training of emerging Cameroonian art professionals.

At the moment, I am collaborating with Lolodorf City Council. The first project we did in February was already a significant learning experience for the council’s cultural officer with whom I worked. And Yvon Ngassam who was the first artist I commissioned suggested we work with Yves Xavier Ndounda for the installation. I knew him but had never worked with him. It was a fantastic collaboration so he’s definitely going to be involved in other projects. So, although Bikoka Art Project is located in Lolodorf, it also has the potential to include members of the art community from across Cameroon.

One thing I can add in relation to young people, is that the interest we got when we did our launch exhibition during Youth Week shows that there is a potential to open up the scope of educational and professional opportunities after the baccalaureate. We’ll start gradually but I can already say that there are plans to branch into the teaching programme of the final year students of one of the local high schools through a photography workshop scheduled to take place in October alongside an international partner. It will not just be about learning about photography, but also about organising cultural events and everything this implies. Since I am also in the process of building a residency, I am also keen to identify members of the community who could be trained and work with me.

For 2022 Bikoka Art Project focuses on photography and youth. 2023 will be dedicated to the legacy of Anne-Marie Nzie (1931/32-2016) who was an important female Cameroonian singer who happened to be from Bibia in Lolodorf. So, the focus will be around music, sound art, the place of women in Cameroon’s music industry, and feminism. This will coincide with the local council’s events for International Women’s Day. Elsa M’bala, a Cameroonian sound artist based in Berlin and Yaounde, will be the commissioned artist. Although, I have to say that future selections will be upon open call and I have plans to set up an advisory and selection committee. It is very likely that the programme will alternate, one year focusing on youth, the other year focusing on women.

Portrait of a Community – Features of a Land, exhibition view of Yvon Ngassam’s exhibition at the Municipal Foyer, Lolodorf. Photo: Christine Eyene, 2022.

C&: How was Portrait of a Community – Features of a Land one of your first exhibitions conceptualized and what’s the importance of documenting a community in the age of social media?

CR: Portrait of a Community – Features of a Land grew out of a commission by Yvon Ngassam documenting the creation of Bikoka Art Project. Yvon came with me to Lolodorf in August 2021 and photographed the environment, nature, the town, the architecture including the colonial remnants, and its people. Just between August 2021 and February 2022 we could see some changes in the city with the new Yaounde-Kribi road being laid and one of the elders whom he photographed passed away. The portrait Yvon took of him then took on a memorial meaning.

Yvon began video interviewing the elders about the history of Lolodorf. It is actually an ongoing project that will include a video piece and mixed media art works since Yvon is going to create embroideries based on Lolodorf’s archival images and the photographs he took. He is interested in the process of retrieving history as a living archive, and how one can materialise those vanishing memories through art.

My initial plan was to print the images on fabric and exhibit them in the forest on our land in Bikoka, which is still something I am planning to do at some point.  When we met up with the mayor of Lolodorf, he offered the renovated Municipal Foyer as an exhibition venue. I welcomed this invitation because the Foyer is centrally located, and it was one of the venues of the Youth Week events. So that was ideal to connect with young audiences and of course the larger community.

In relation to mobile technology and social media, I noticed that a lot of people were taking selfies in the exhibition space. One could sense that there is a desire to inscribe oneself within both the local history and the artistic landscape. We have not tracked who shared those images on social media. Actually, the City Council did. But it is certainly a platform we’ll use as an outlet or digital exhibition space as part of the upcoming workshop in October. We’ll see then how important and effective that is.