For centuries Black cultural production has been coming out of countries where German is spoken, and it has been as diverse and distinct as the various regions themselves. In this series, we highlight cross-generational artists with strong ties to these geo-cultural territories. Noemi Weber is a fine artist, and her sister Milena is a director and choreographer. Their exhibition project SchwesterInnen moved along this intersection. With C&’s Mearg Negusse they spoke about the body as a resonating system, gestural painting as a non-verbal language and processuality as a shared space for artistic production. 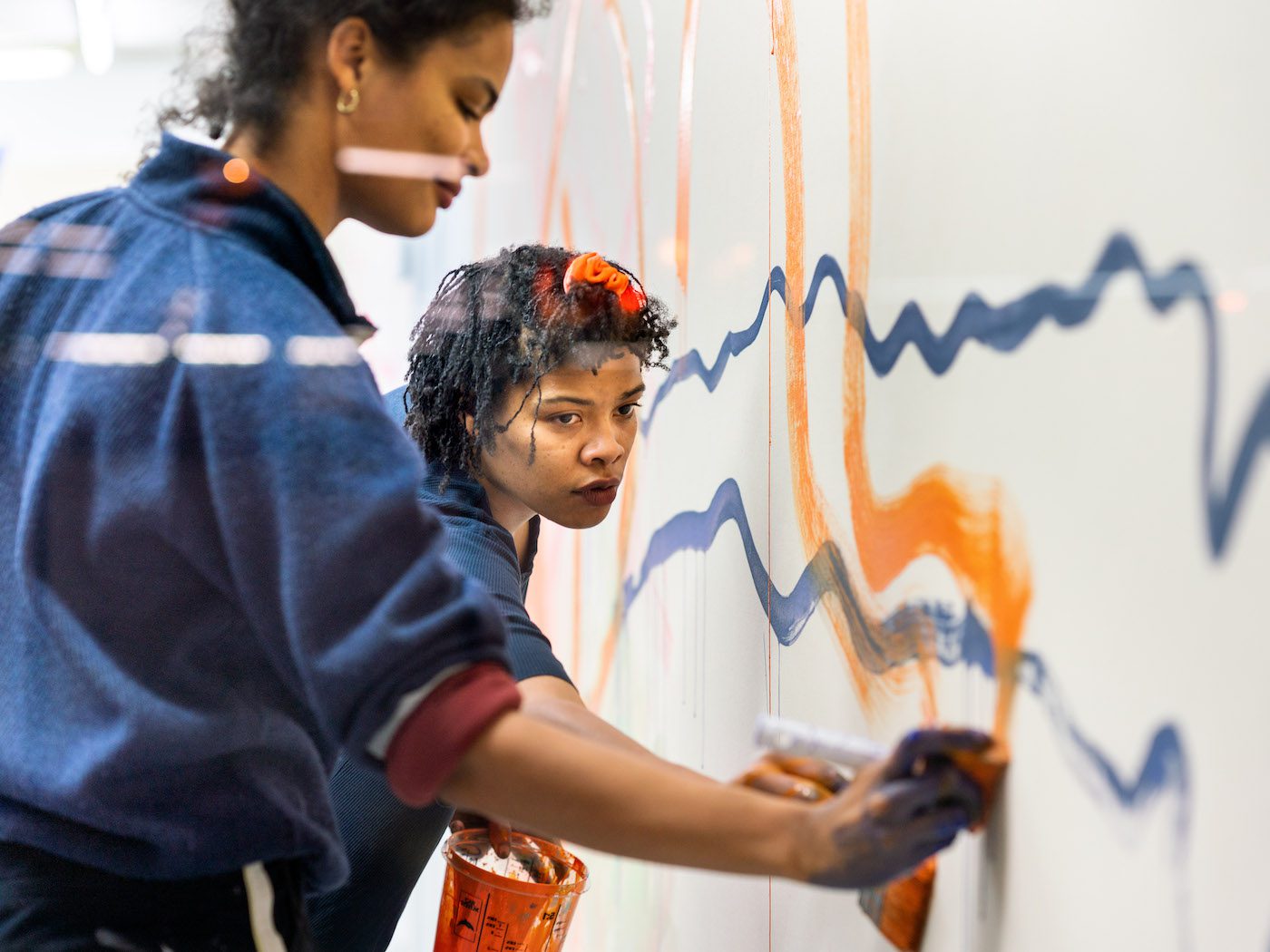 Contemporary And (C&): Can you tell us how you respectively came to visual arts and theater/dance?

Noemi Weber: I think there are multiple strands that can intertwine and retrospectively add up to a decision like making art. Paintings always had a strong sensual appeal to me, very much evoked by their texture. I think I always had a very immediate and tactile understanding of it. At the same time, there is an early memory from kindergarten: I was drawing squares meant to be houses. An older person approached, also drew a square and then added a few more lines, so suddenly the square had become a cube. My synapses were on fire! Without being able to describe the experience as something related to art, I was intoxicated by the possibility. Later I applied to study and was accepted for both international law and fine arts. I thought if I was accepted by the art academy, I would go there for a year and then do something “proper.” But I stayed, following various experiences rather than having a deep knowledge about what art might be.

Milena Weber: I can relate to Noemi’s affinity to art, but in the field of literature. Being younger I felt an immediate attraction to narration, world building, and storytelling. I also remember seeing Noemi on stage in a theater play in school and being blown away by the possibility to express oneself physically.  Also, I was amazed by the stage to serve as an extension of reality, where social rules and elaborations could be negotiated and re-invented.

I came from performative arts to dance. For many years I was a spectator then a performer and then a presenting director in the local international off-theater scene. Watching dance performances, I was drawn in by the emotional tension and even more so by the phenomenon of collective experience itself. A collective emotional build-up – what could that even be? How could attention and tension feel communal? How could an “atmosphere,” a “vibe,” a “spatial mood” be understood? Philosophically, as well as practically in terms of its creation.

C&: You each come from different disciplines, but your practices are strongly engaged with space or spatiality.

MW: It’s almost easier for me to speak about Noemi’s work in that context, considering how it engages me. Due to the sizing of her works and the way they deal with color and materiality, they stimulate and reformulate the space and thereby also my physical position and perspective within it. The body of the viewer is considered actively – the overall architecture begins to resonate, and people may experience themselves as participants in the situation. Noemi’s artworks engage the viewer on a very affective level without having to present themselves meta-discursively. It’s a spectatorial perspective – they work with sensual affectation and perception, creating a sort of flickering.

In my work I find that in the way I deal with costumes. They often are designed as dramatic enlargements or alienations of the body, which emphasizes their play with temporality. Working with minimal movement and slow motion can underline the body as a space, as an extension, a volume. It thereby gains a sculptural aspect, as its dimensionality evokes a dialogue with the space. The specificity and exclusiveness of a body’s perspective also underline architectural relations. So there are two interconnected notions for me: the body that communicates and relates through the architectural space also evokes the historical conventions of spectatorship and specific technical conditions that need to be considered.

NW: I am glad you said this – I might have formulated it similarly. It is nice to hear it from your perspective! 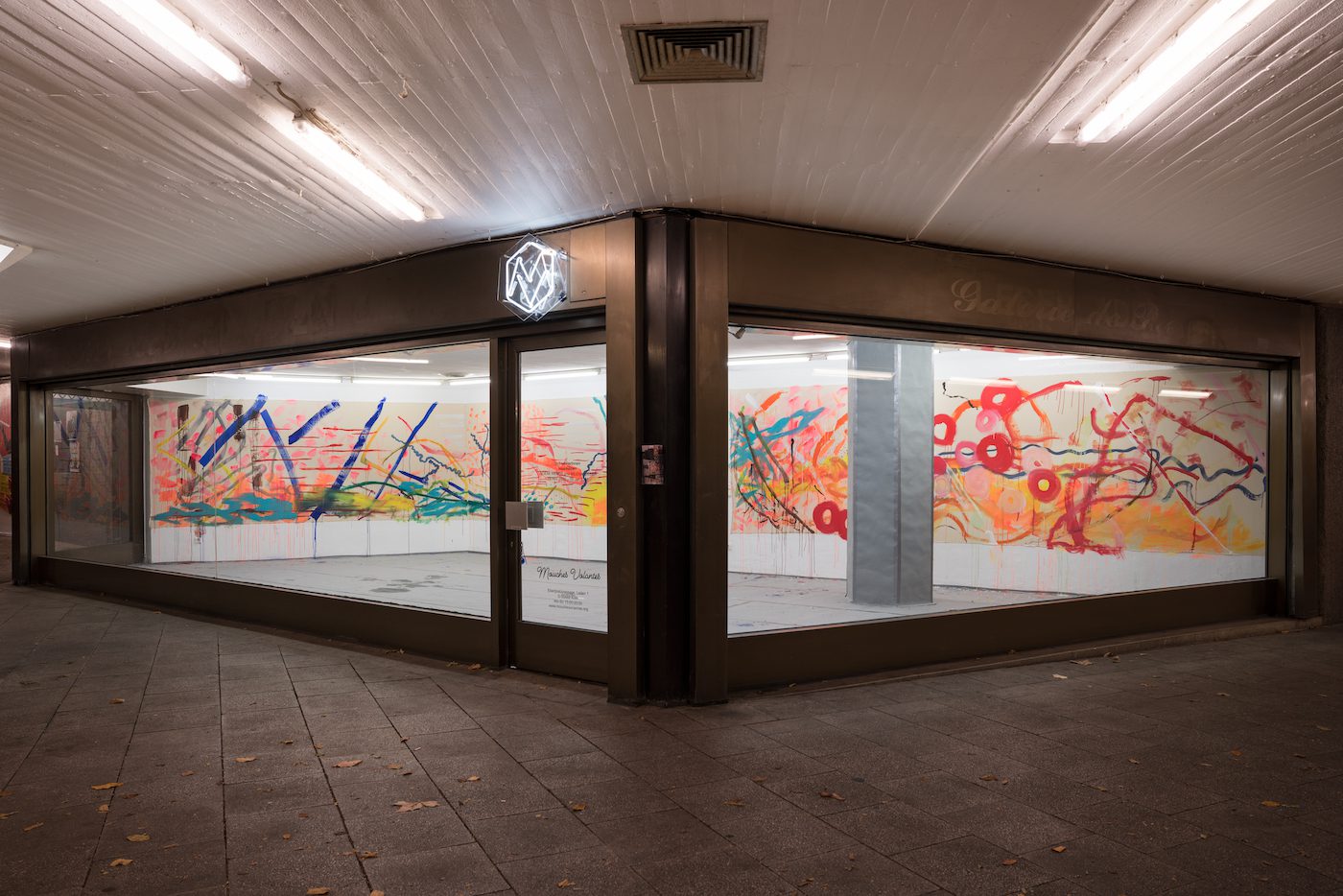 C&: You collaborated for the exhibition SchwesterInnen – touchdownn at the interdisciplinary art space Mouches Volantes in Cologne. How did that come about?

NW: It was an invitation for us to shift our collaborative work from the studio where it started to a public space, and to thereby share the idea of painting as a form of dialogue, conducted non-verbally. But already before that presentation, there was an agreement about wanting to work together, about spaces and possibilities, some of which will be explored in the future.

The impulse came more from my direction; I have been thinking about gestural painting for years but was no longer able to produce it. It didn’t seem to make sense anymore to leave traces of a three-dimensional movement on a two-dimensional support. At the same time, Milena kept talking about her practice and joint improvisation, which is partially about increased perception that allows synchronization, diving into a simultaneous state that enables the performers to anticipate each other. This is something that I recognized in gestural painting and would describe as “mimetic-looking” but time-delayed. Standing in front of a gesturally painted picture, you can “read” the painting as a precipitation of movements. It is a retracing of movements that are entrenched in the condition of being a body, and one can almost finds oneself in a mimetic feedback-loop with the artist who produced the image.

MW: I think very similar questions arise in movement improvisation. I’ve also always been very interested in how conditions lead to expression. Conditions that don’t mean you have to actively produce, but that allow you to create rules that lead to expression. An obvious example is gravity in dance. 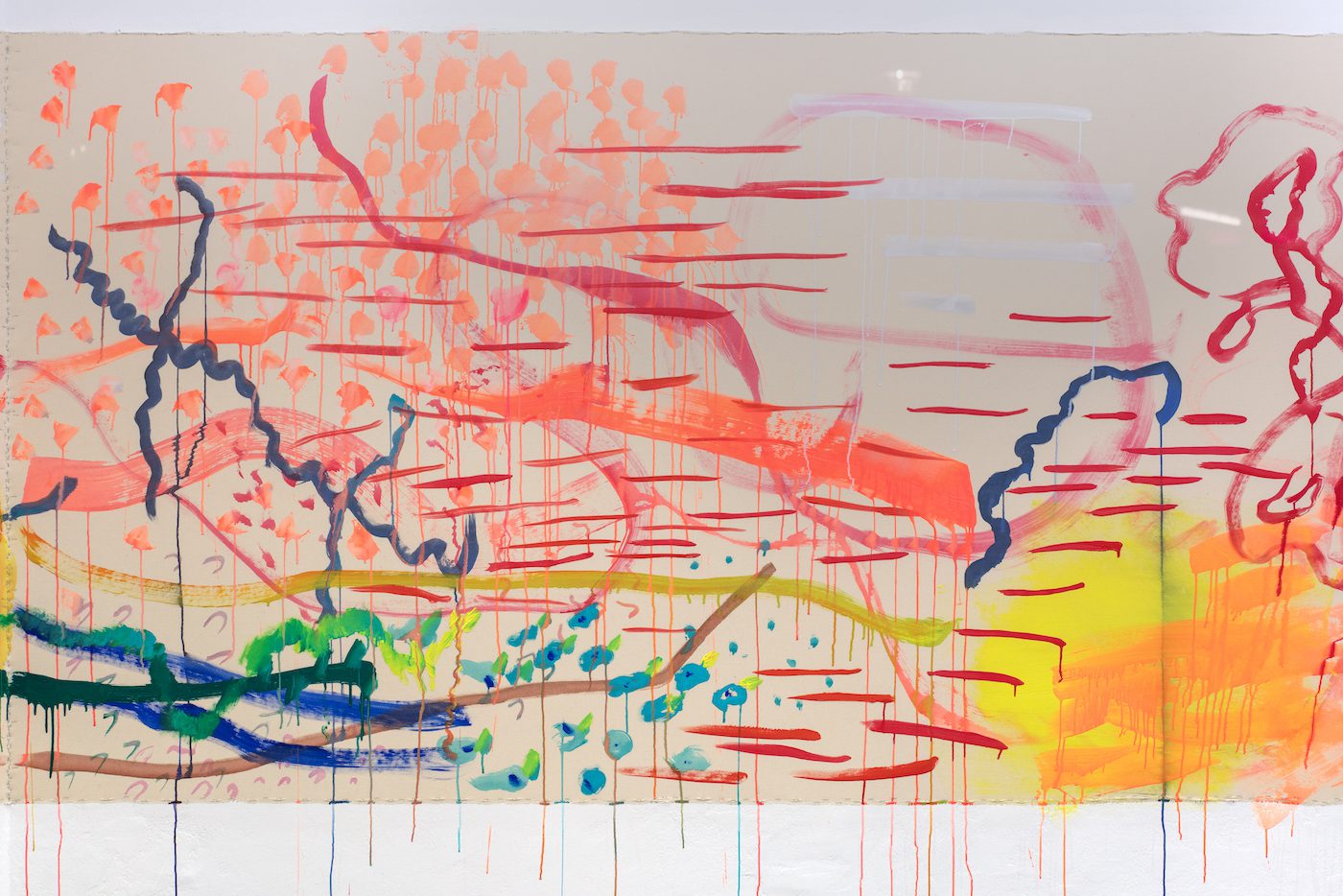 C&: In SchwesterInnen the process of creating the work was an essential part of the exhibition. Would you say that this was not only an artistic act but a political one in which you developed new conditions?

MW: I think so. The first, obvious thing that comes to my mind is that our collaboration counters the assumption that creative work must be kept secret in order to preserve the myth of the artefact. Our work was not about completely demystifying the art process, or saying this is just a pragmatic gesture, but rather stressing the fact that processuality is a reality of creating art. And that the recognition of the process could be a liberation from the obsession with the product solely. Another important aspect is that we constitute the collaborative moments between us, but are also spectators of that communion, of that attention.

NW: Yes, the idea of common space is really important! I can say that I am also preoccupied with a certain concept of artistic production and consumption that is constituted by a European perspective. Some of its inherent parameters might hinder from thinking things further. For example, it is now obvious to me that gestural painting can be a group activity. But it is usually not practiced in this way, which is a pity. Especially as people often claim that painting is a language. Taking this assumption seriously, the question would not be whether painting is art, but whether and how exactly we can communicate through painting. It might be worth taking a closer look.  Making this ongoing experience with Milena I’m sure: we can talk like that. And this could develop into an ongoing practice of interacting, that can include more participants than Milena and I and which might produce different visual forms than just the ones we already know.

Noemi Weber (* 1989 in Moscow), painter and educator, living in Düsseldorf and Brock. She graduated from the Art Academy Düsseldorf, Germany.

Milena Weber (*1991 Münster), performer and choreographer, based in Amsterdam. She graduated in Scenetic Arts (Theatre, Media, Philosophy) at the foundation university Hildesheim (Germany) and in Choreography from The school of New Dance Development (SNDO) Amsterdam (Netherlands).