From 7 July to 15 December 2016, twenty-five African women artists occupied the three-story-tall Rochechouart Departmental Museum of Contemporary Art, in the region of Haute-Vienne, France, to undertake the second stage of an exhibition conceived by Orlando Britto.

The exhibition is named after the famous Lucy, considered an early ancestor of modern humans, whose skeleton was found by anthropologists in Ethiopia in 1974.  Her name was chosen in reference to a psychedelic rock hit from the time, “Lucy in the Sky with Diamonds,” by the Beatles. Ethiopians renamed her Dinknesh, which means “you are wonderful.”

This is a reference to the African continent – the site of Lucy’s discovery and the starting point of the exhibition – as well as to African women artists. This exhibition then offers several aspects of African modern art through forty contributions from women artists based in Africa or belonging to its diaspora. 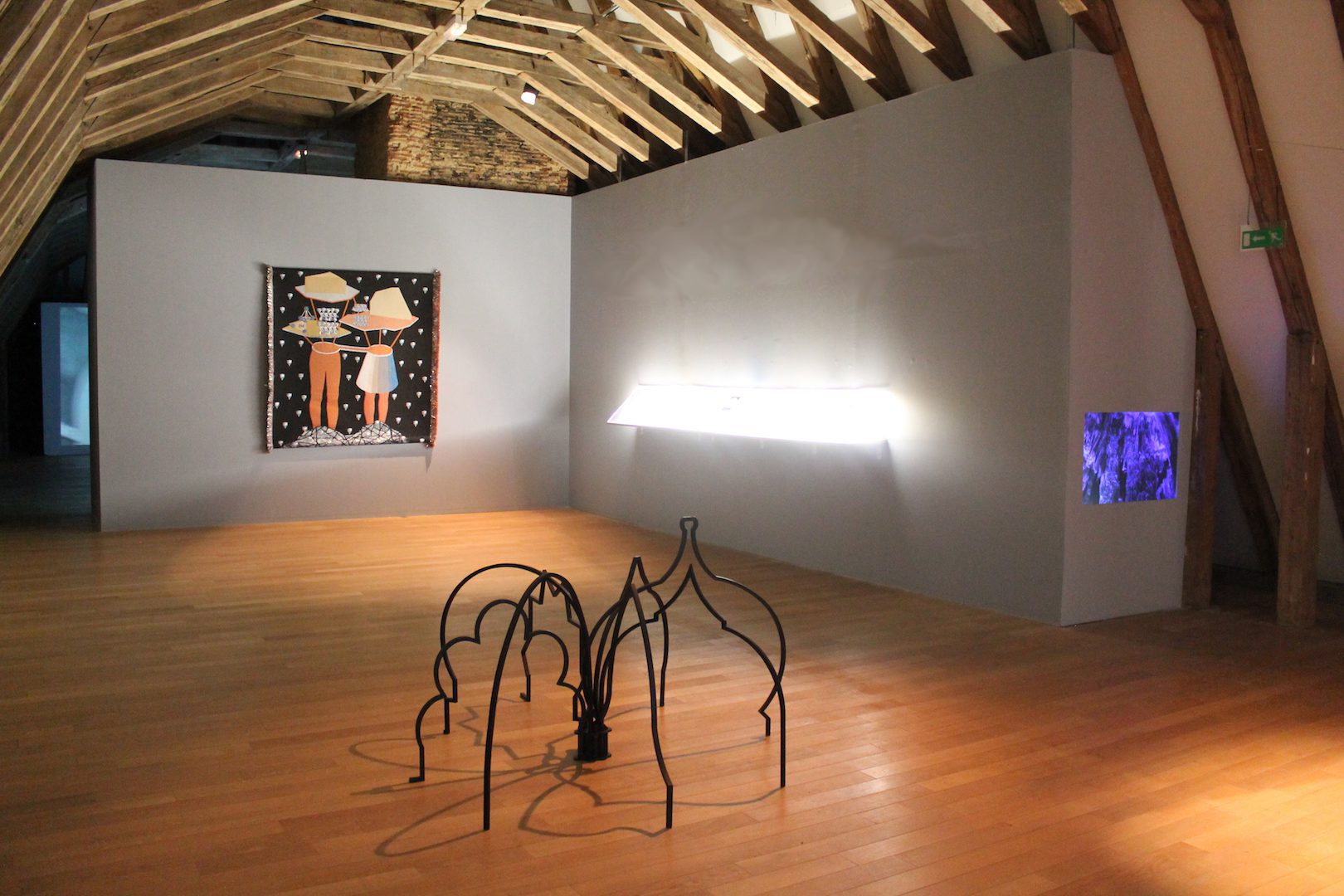 The works exhibited at the beginning are direct references to the theme of archaeological discovery or to Lucy. These include Aida Muluneh’s series of color photographs, Amina Zoubir’s installation, and Berry Bickle’s artwork. Visitors are also invited to expand their horizons beyond the mother of humanity.

A series of intimate drawings by Pélagie Gbaguidi called Never Forget the Song are displayed in low display cases at the center of a room whose walls are covered with works by Wangechi Mutu, Ghada Amer, Kapwani Kiwanga, and Julie Merethu.

The whole experience spans from strength to frailty. Further on, you can admire Zineb Sédira’s images of shipwrecks off the coast of Mauritania. Those photographs foreshadow what is shown in the next and last room: the socially and politically engaged work of Sue Williamson and silk embroideries by Billie Zangewa, both from South Africa.

Sue Williamson tackles social issues that have afflicted South African society in the post-Apartheid era, like the shame and rejection endured by people with AIDS – as in the From the Inside series. She also tackles the question of women struggling against Apartheid through black-and-white portraits in her series All our Mothers.

Billie Zangewa, for her part, uses an autobiographical style to tell doomed love stories. IN fact, she is the main character of her work, as a tar flower with a slender body, both an object of desire and a subject with a will of her own. Love and pain are side by side, weaving a quest for the self. Love is also the subject tackled by Mwangi Hutter, a couple who project their video onto three screens. This triptych reflects on loneliness and on coupledom. 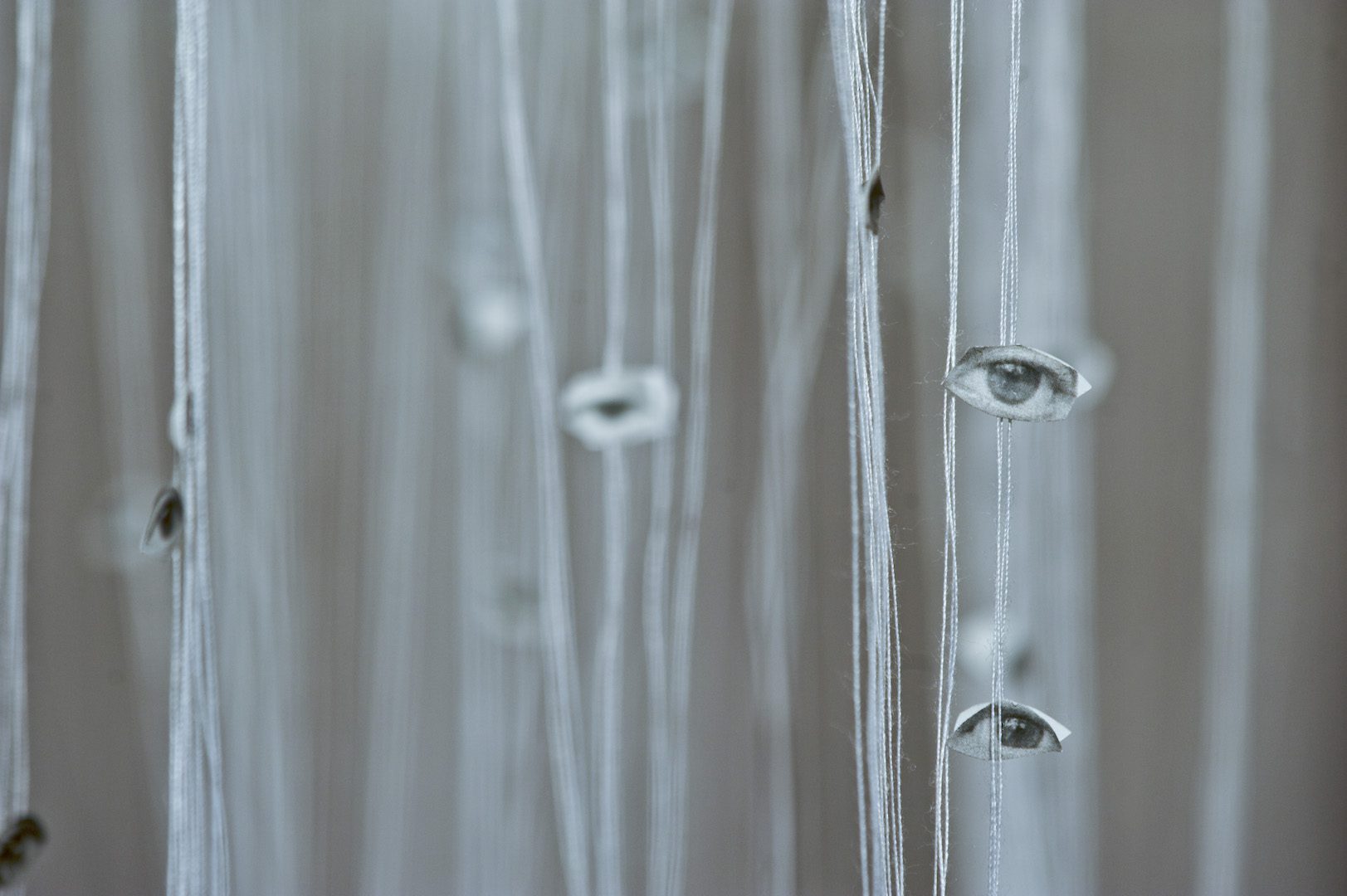 Fatima Mazmouz’s contribution encompasses a video, a series of photographs, and an installation all themed around “Super Oum”, the artist’s superhero alter ego. Together they try to view women’s condition from a derisory perspective.

Zoulikha Bouabdellah’s sculpture resembling a religious building epitomizes her interrogation of religion. The sculpture’s shadow draws a spider on the floor, invoking Louise Bourgeois’s famous sculpture and reflecting on an underlying threat.

Keep in mind other contributions such as Amal Kenawy’s The purple artificial forest, an animated movie playing with the mise en abyme of patterns parading onto the screen, as in a dream blending amazement and anxiety. Moroccan artist Safaa Erruas’s very delicate installation gives us food for thought: in one of the last rooms of the museum, the viewer is intrigues by a kind of shoal of jellyfish in suspended cotton with multiple cut-out eyes .

Myriam Mihindou’s video also keeps our interest aroused, as we fear she will cut herself with the broken glass she heaps into small piles. The experience of viewing it conveys a strange sensation at the verge of both pleasure and pain.

To watch the world through Lucy’s Iris is ultimately to watch the world through the eyes of contemporary women artists. We might ask ourselves why this exhibition is restricted to women. Previous exhibitions have shared the same rule and justified this feminist bias. That was the case with Where we’re at!, curated by Christine Eyene in Bozar, Brussels, in 2014, and with Body Talk by Koyo Kouoh in 2015 at the Wiels Modern Art Center, also in the EU capital. The exhibition being presented at Le Havre’s Natural History Museum (L’autre continent – The other continent) is the only one to pay a tribute to the continent, but with fewer contributing artists.

Lucy’s Iris is first and foremost an occasion for the public to learn more about the work of African women artists – and witness the quality of their work. The setting in the city of Rochechouart and its beautiful Departmental Museum of Contemporary Art only enrich the experience.

Based in Paris, Dagara Dakin graduated in art history and is a freelance writer, critic and exhibition curator.