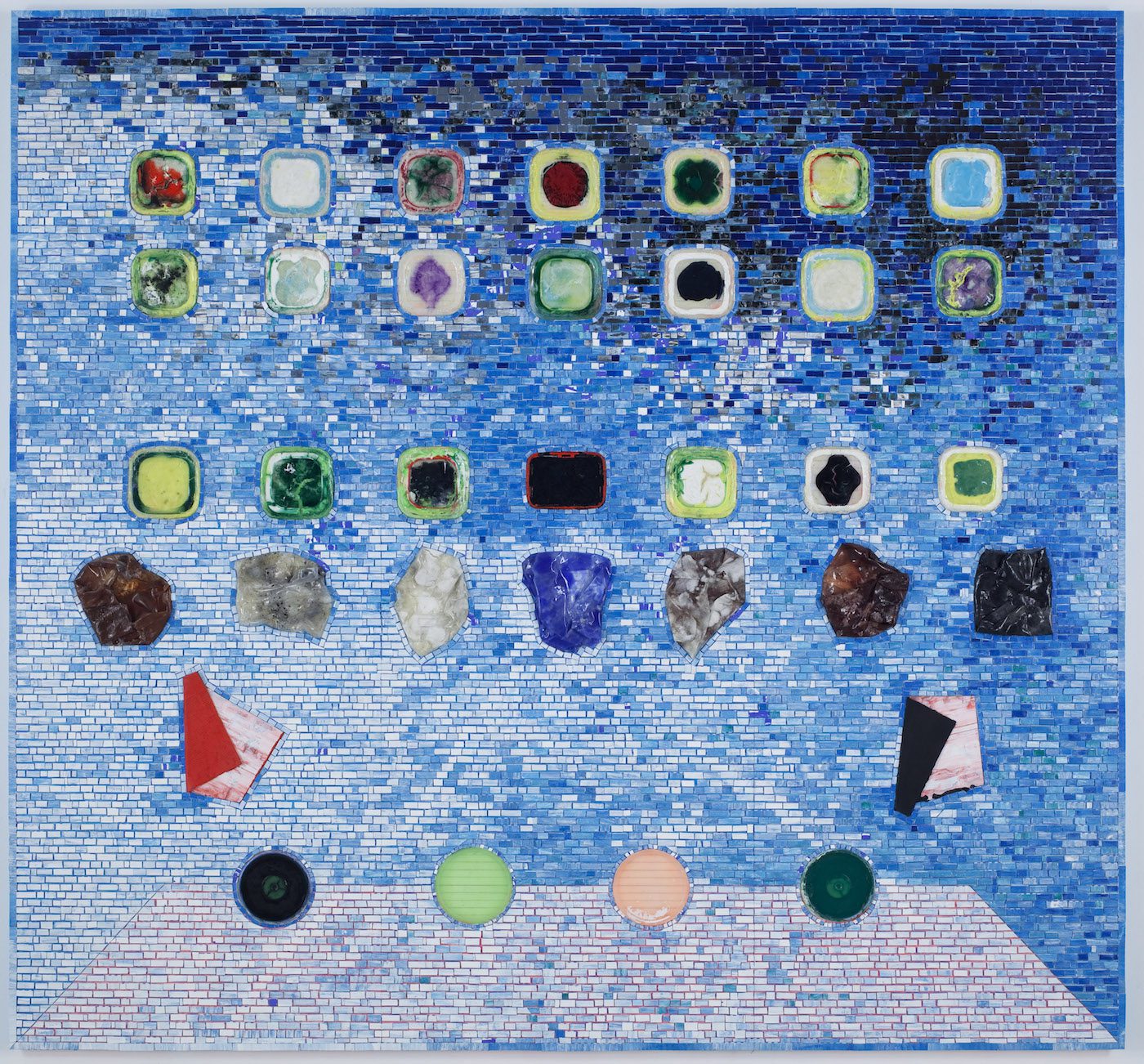 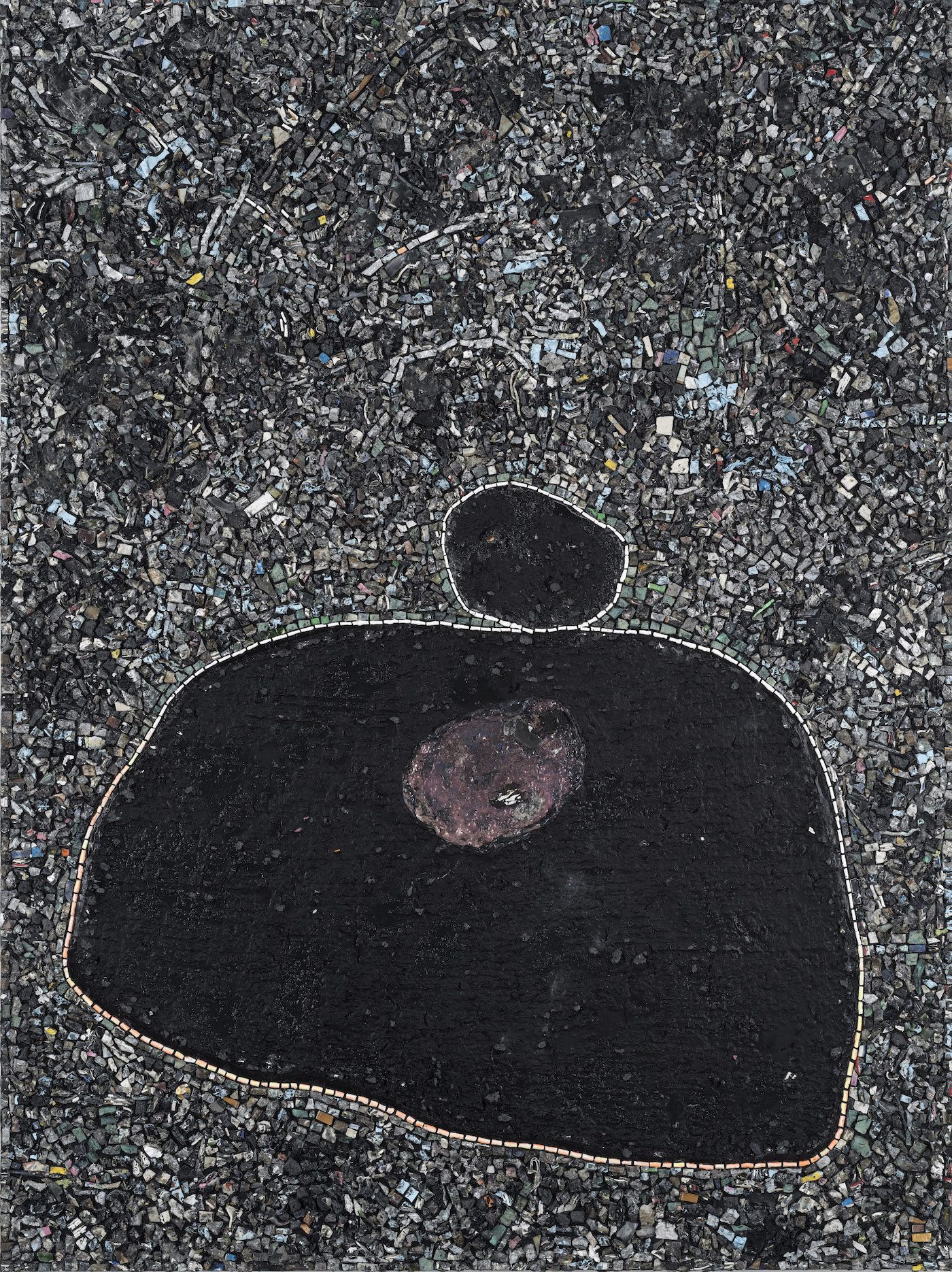 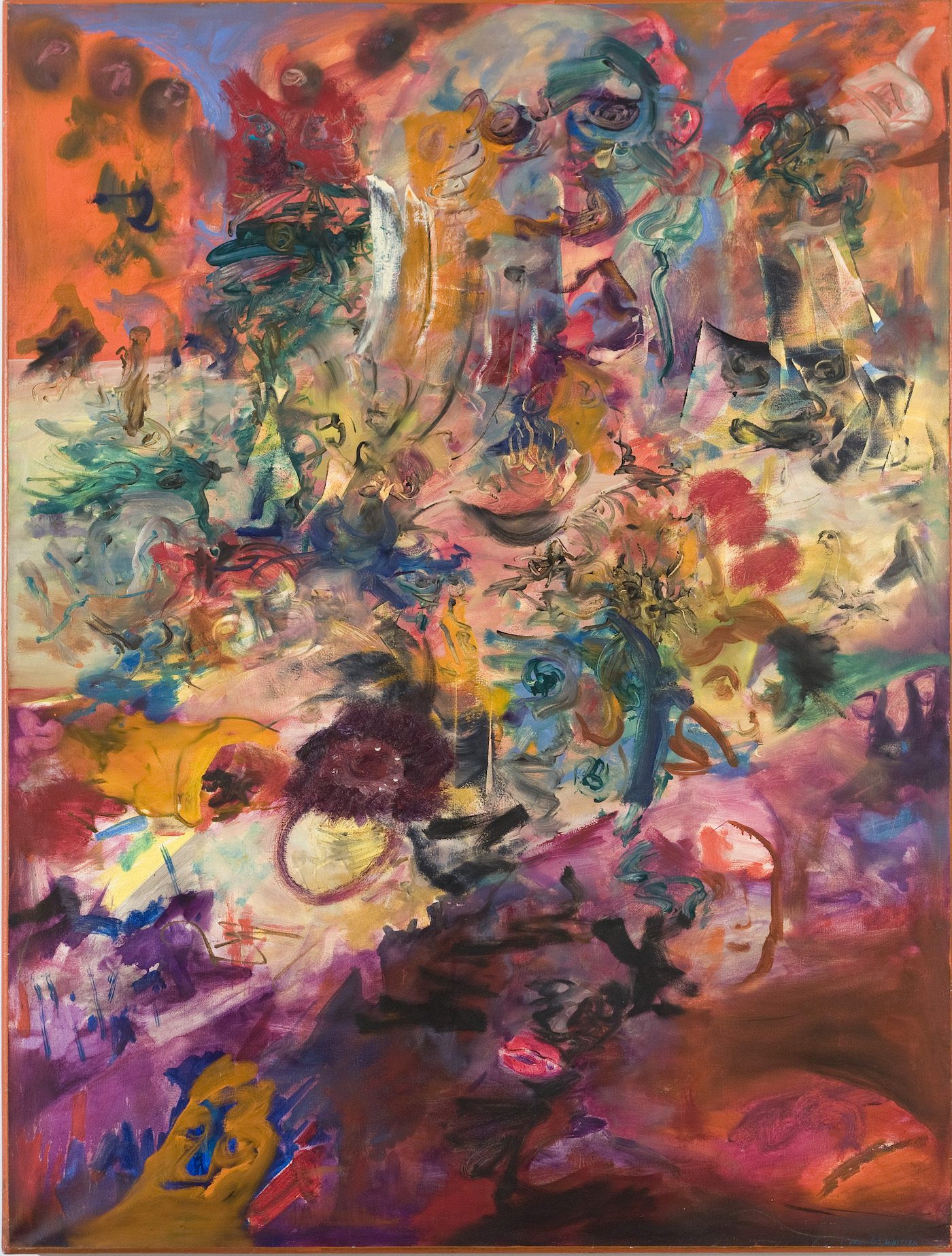 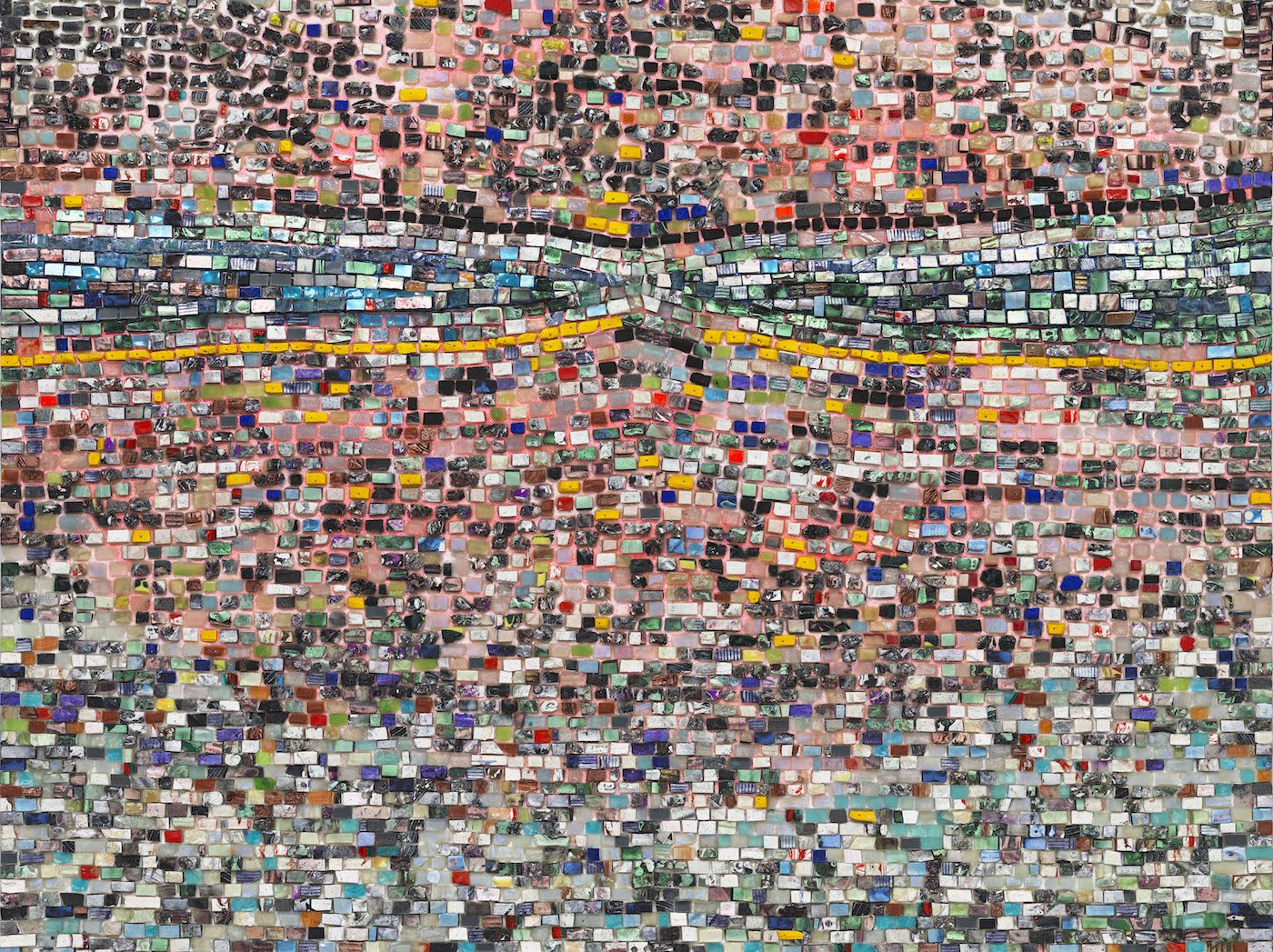 Jack Whitten: A Painter’s Painter Gets His Long-Overdue Recognition

Many of the pioneering Black artists of the “post-war” period were largely neglected by the western art world despite their significant contributions. Nonetheless, throughout the decades they have persevered in their vision. In the last decade, however, western institutions have been waking up to these artists’ legacies, finally curating first major retrospectives. And of course the markets have followed suit. In this series we chart their careers, highlighting their artistic evolution and motivation in relation to the world around them.

The fifty-year mastery of late US American painter Jack Whitten (b. 1939), one of the most inventive and experimental of abstract painters, has been disregarded until recently. The artist died in 2018 and this year Berlin’s Hamburger Bahnhof hosts his first major exhibition in Europe, with thirty works: Jack’s Jack.

Curated by Sven Beckstette and Udo Kittelmann, and encompassing a period between 1968 and 2017, the exhibition celebrates how the artist extended the boundaries of abstract painting decade after decade. Born in Bessemer, Alabama, at the peak of segregation, Whitten grew up poor with no access to museums or libraries. He enrolled at Southern University in Baton Rouge, where he studied biology and then art and became involved with civil rights organizing, once meeting Dr. Martin Luther King Jr. Following the advice of an architecture professor, Whitten then moved to New York in 1960 to fully focus on his art at the the Cooper Union for the Advancement of Science and Art.

In New York he immersed himself in all the city had to offer, including the Cedar Bar, haunt of the abstract expressionists – there he met Willem de Kooning, who became a big influence in his early career. The retrospective shows two paintings from that decade: Head IV Lynching (1964) and King’s Wish (Martin Luther’s Dream) (1968). These two paintings share the artist’s lifelong preoccupation with the Civil Rights Movement and white oppression, as well as his acute affection for experimentation. Yet they are vastly different from each other in style. Head IV Lynching is a small minimal abstract work, mostly black with a floating white specter, while King’s Wish is a large, surreal, semi-abstract, semi-figurative painting with highly expressive brushstrokes in multiple colors.

The 1970s saw another breakthrough in his long road of experimentation. He started working purely in abstraction and developed what he called the “developer” – a floor-based technique in which he spread slabs of paint and dragged them across the canvas with a squeegee. The Hamburger Bahnhof show only features one of his signature slab paintings: Delacroix’s Palette (1974). It epitomizes many of Whitten’s concerns, theories, and techniques, which have in turn influenced aesthetics and artistic methods to this day. His references to art history reveal him to be a self-aware and self-assured artist who used this knowledge to take the medium further. The technique atomized the essence of a subject into the purest form of material, in this case by selecting colors associated with the French romantic painter, layering and spreading them across the canvas in one single movement, adding an infinity aspect to it with its horizontal linearity.

The slab paintings were unlike anything else at the time in the US. Initially developed in the 1950s by Karl Otto Götz, it would be his student Gerhard Richter who would go on to gain recognition for them in the 1990s with his Abstract Paintings series. At Sotheby’s, a Whitten slab painting from 1974 sold for US$2 million in 2019; one by Richter from 1994 had sold for GBP21 million in 2012. That Whitten’s works are now being auctioned for seven figures is indicative of a larger corrective awareness in the art world whereby many aging artists of color are being recognized, including Howardena Pindell, Sam Giliam, and McArthur Binion.

Whitten was entirely involved with the medium of painting on the material, mystical, and intellectual levels, and he worked against anyone’s expectations. He possessed a confidence that allowed him to break down boundaries between drawing and painting, push the medium into 3D materiality, and use light to give paint multiple visual qualities. Throughout his career he oscillated between figurative and abstract but it was the latter that came to dominate. “I choose abstractness because of its timeless universality,” he once said. “Every human emotion, every hope, every dream, every memory, and finally every narrative, can be compressed within abstraction.”

His artistic decision was a bold, but may have contributed towards him being overlooked by the establishment. Besides abstraction’s decreasing popularity in the 1960s, it was dominated by white men.

In 2018 Whitten’s representing gallery Hauser & Wirth published his diary, in which he reveals his personal and artistic development as well as his frustrations and dilemmas. “I want to start 1986 with a clean slate,” he wrote. “Of course, this destroys any chance of getting a gallery, no one is interested in an artist at the end of a series and beginning a completely unknown beginning. I am black, 46 years old, angry, tired of teaching, tired of being poor. […] What am I to do?”

Whitten’s achievements haven’t been totally overlooked. Several artists, including Garry Grant, Adam Pendleton, and Mark Bradford, who represented the US at the 2017 Venice Biennale, have praised the artist and his influence. Whitten himself always referenced artists and other personalities he admired. In the 1980s and 1990s he started experimenting further with geometry, materiality, and light. Ode to Andy Warhol (1986) features a mix of varied rectangular patterns, some of which resemble brick walls or flooring.

During the same period Whitten started developing tesserae made out of small slabs of acrylic and oil which he then placed on the canvas. This was the result of years of research around the Mediterranean that began in 1969, when he started spending the summers in Crete. It resulted in paintings that look like mosaics of what at times resemble computer parts, glass, silicone, chocolate, soap, and resin. They are simply made of paint, but because of how they are cut, shaped, and positioned on the canvas, they play with light in novel ways. The artist famously said that he didn’t paint, but rather “made” paintings.

This technique gives the paintings a sculptural quality – the colors jump out of the picture, the tesserae seem to move as we walk past the canvas. Clocking for Stanley Kubrick, (1999), an oil-and-acrylic rectangular painting, evokes the cosmos splashed with green particles floating in the black matter of the universe, like an explosion of color. Another effect of the mosaic technique a screen-like quality. The picture can look pixelated, like a low-resolution screen seen from afar or the pixels of a monitor inspected up close.

In Totem VI Annunciation for John Coltrane (2000), the artist splits the material further by vertically stacking eight parts of plywood with varying dimensions. As a young artist Whitten had the chance to meet Coltrane, whose way of working with “sheets of sound” resonated with Whitten’s “sheets of light” terminology. “[Coltrane] says, ‘Well, you know, it’s like a wave.’” Whitten recalled. “This is what I remember the most and something went off in my head. It identified with what I was feeling in painting.” His love for jazz also played a huge role in how he improvised and freed himself from the restraints of two-dimensional painting.

Whitten was interested in science, spirituality, and technology in relation to the materiality of painting and the world. The painting Apps for Obama (2011) is dedicated to former US President Barack Obama. With a background in shades from blue to white, it resembles the home screen of a smartphone or tablet with various apps icons aligned in rows. “I am convinced that that painting helped him to get reelected!” he mused. “It’s very symbolic references. It’s a referential painting.” The painting is a prime example of what Whitten could do with color and texture. Each icon has a different texture – at least to the eye – and some are amorphous, others more geometric. Some look like melting plastic, others like gemstones. What they all have in common its their unique plasticity.

Black culture, including politics and history, was a topic very dear to the artist. Black Monoliths is his only series exclusively named in dedication to Black people. “I could spend the rest of my life adding to this series,” he once said. “This is my contribution as a painter to memorialize these heroes through the abstract meaning of symbol.” Some of the people he has also dedicated paintings to include James Baldwin, Miles Davis, Lena Horne, Bobby Short, Romere Bearden, Al Loving, Norman Lewis, Amiri Baraka, Jayne Cortez, and Ralph Ellison. Jack’s Jack features Black Monolith X Birth of Muhammad Ali (2010). The painting consists of various small parts of acrylic splashed with color, looking like pebbles on closer inspection. For this series the artist froze an acrylic slab only to shatter it into pieces with a hammer much like Ali’s raw energy channeled through the plasticity of boxing.

Jack Whitten was a painter’s painter, a thinker, an activist. Throughout his career Whitten never stopped reinventing himself, pushing the possibilities of painting and its making, honoring the people he admired.