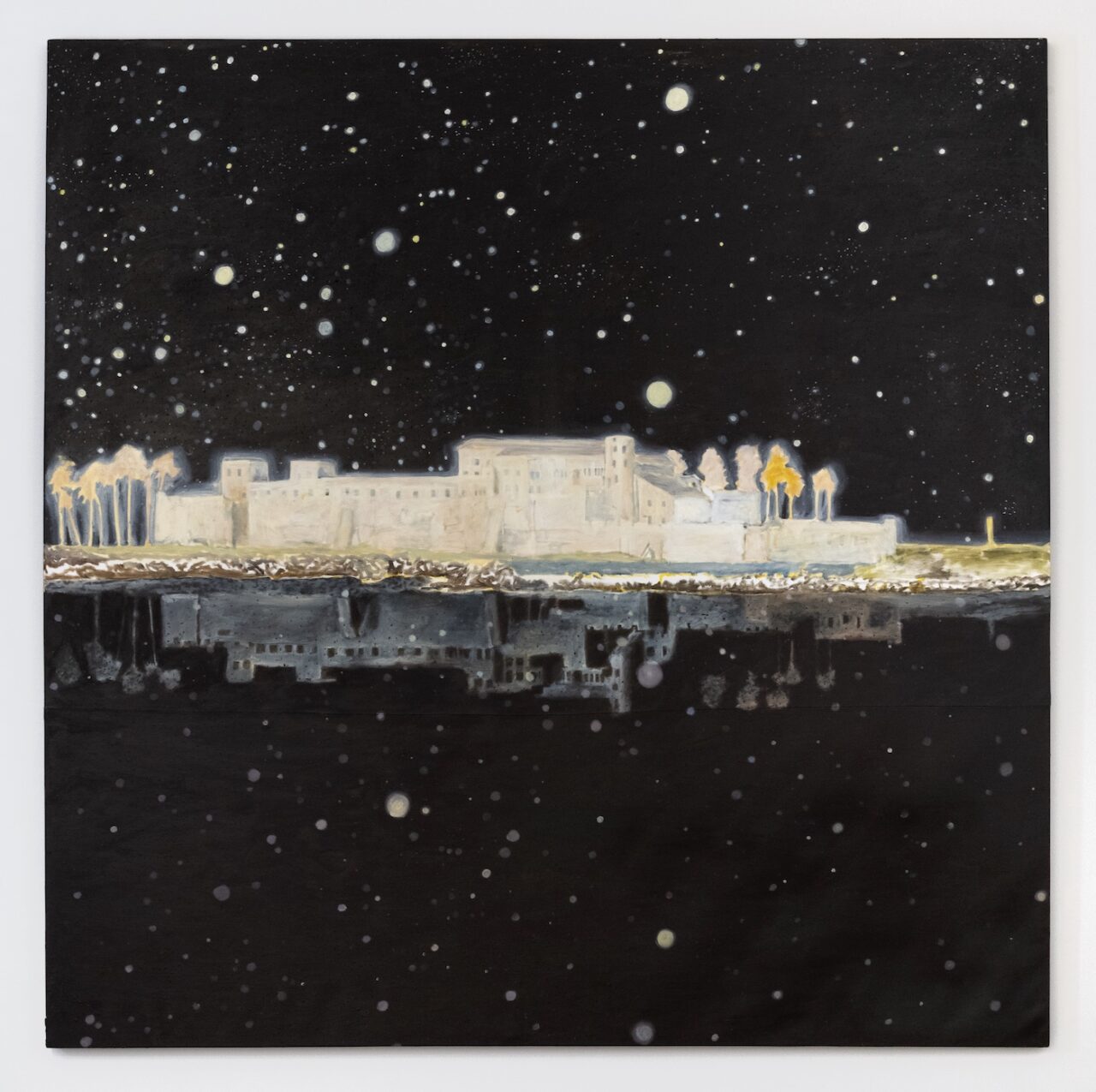 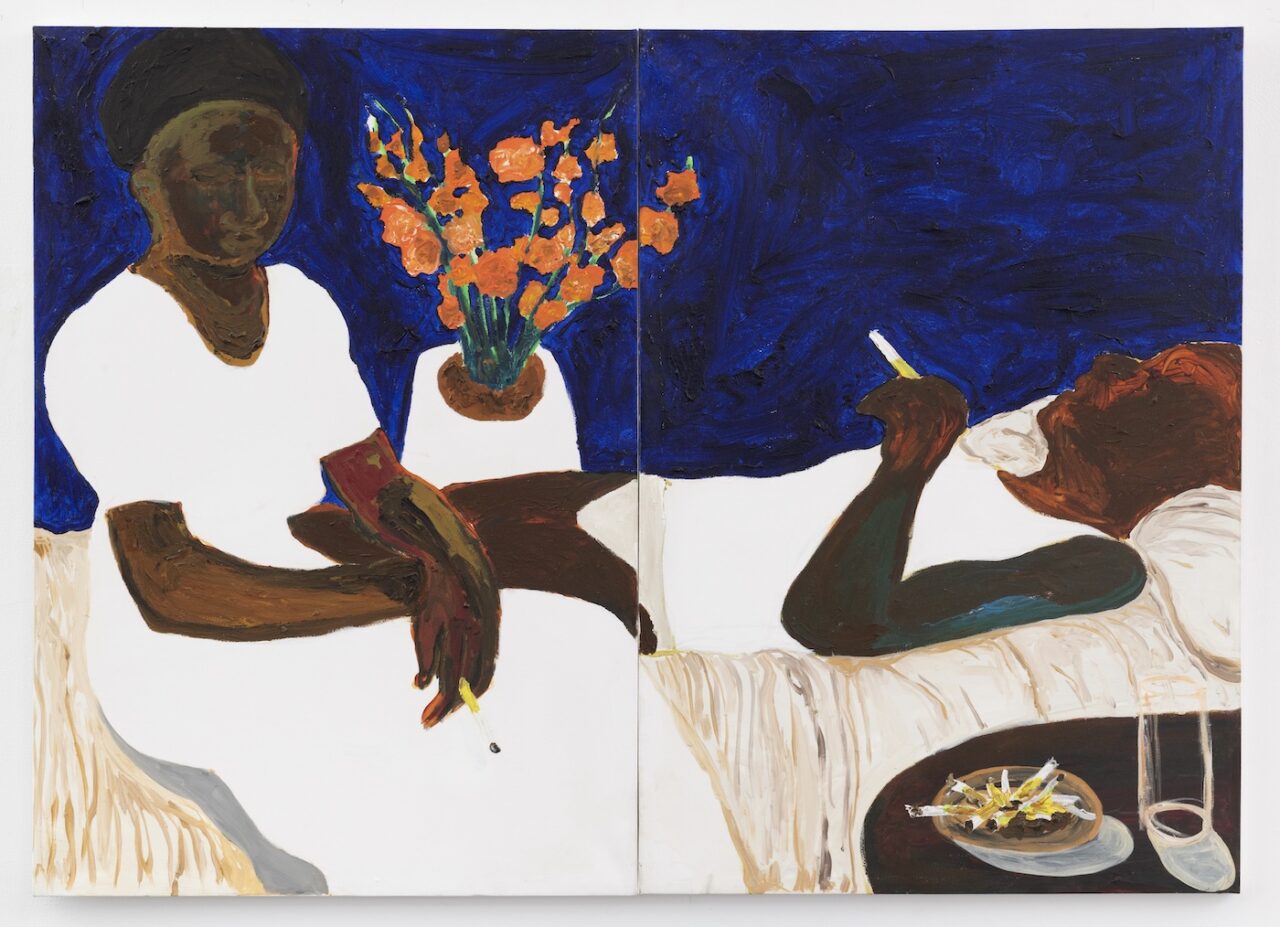 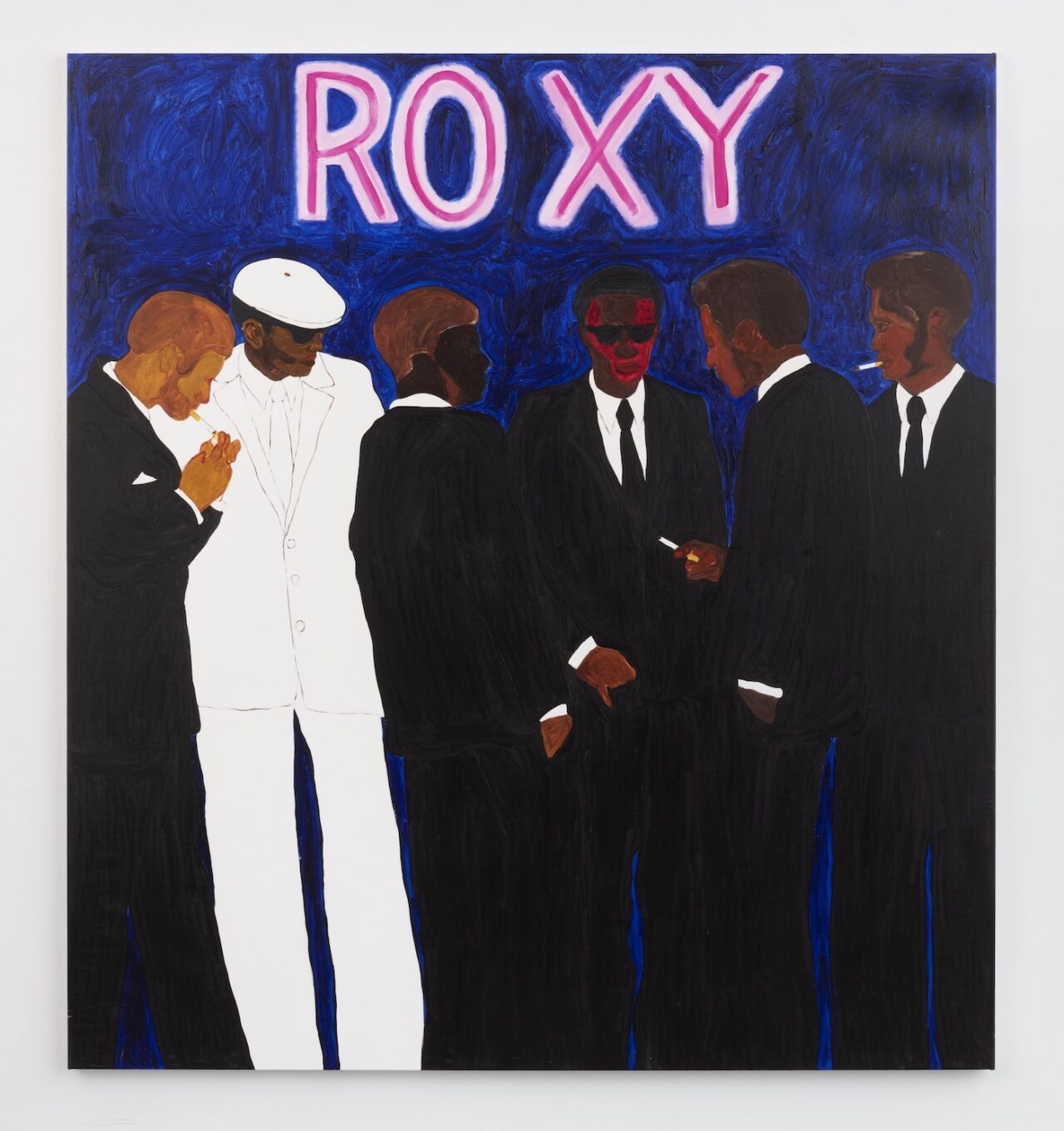 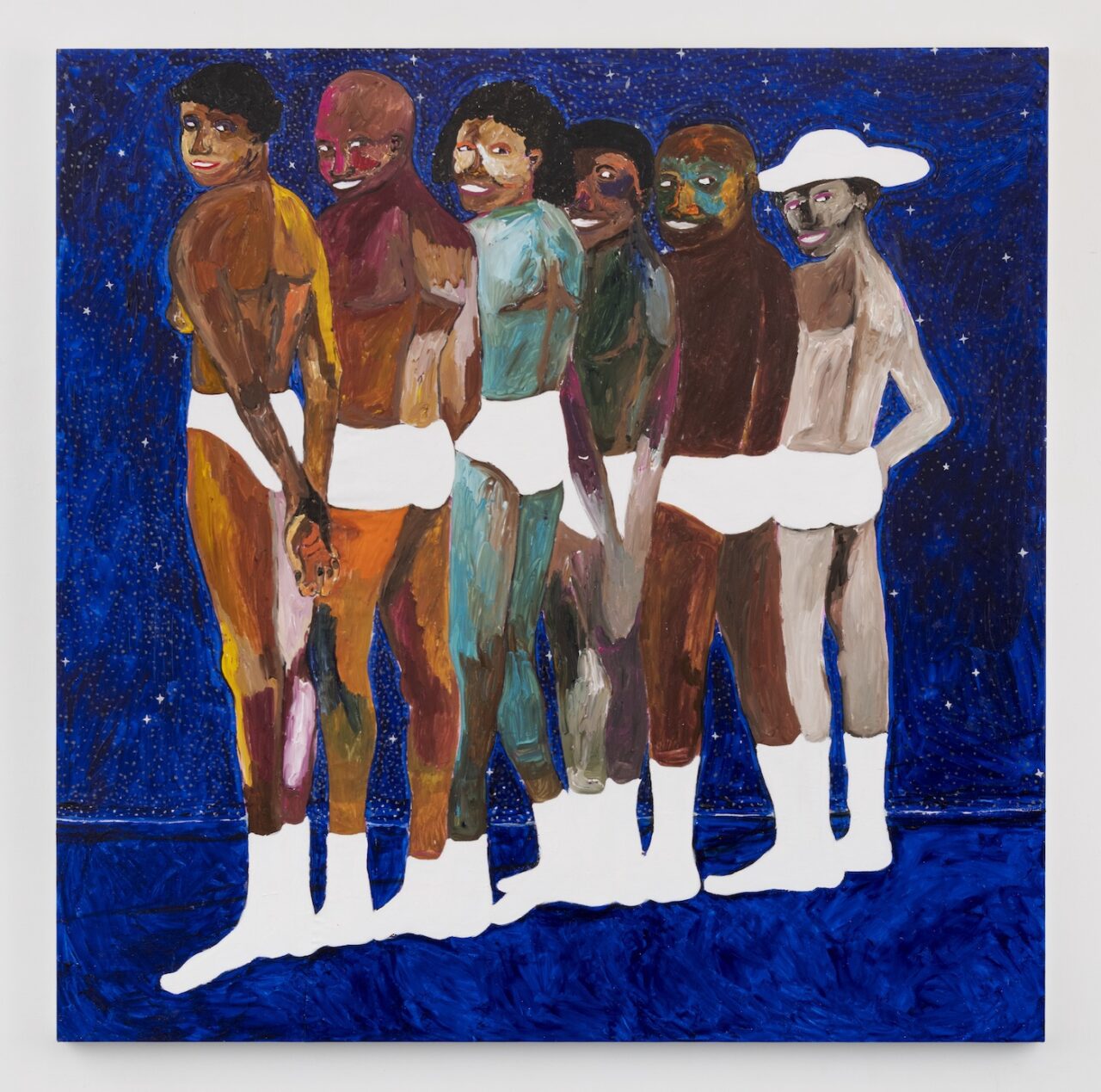 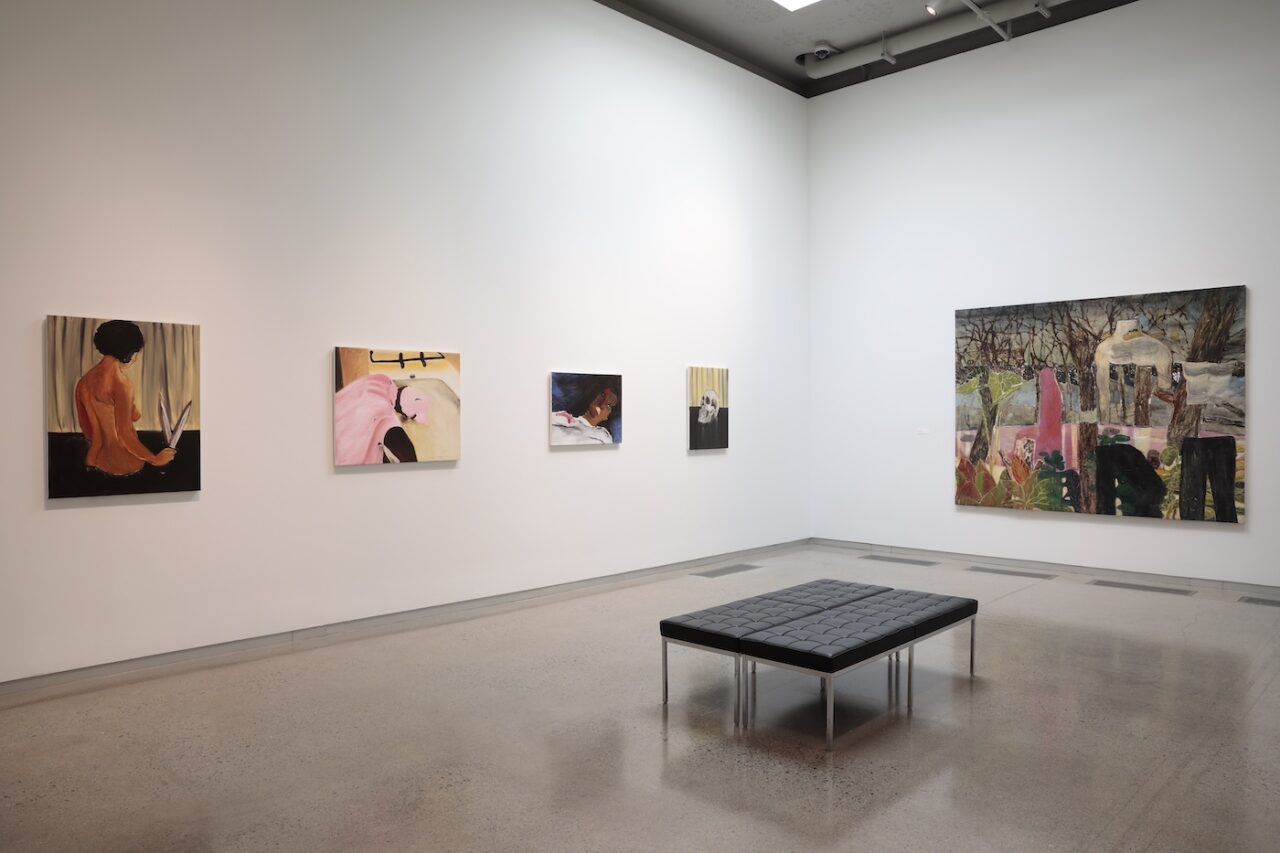 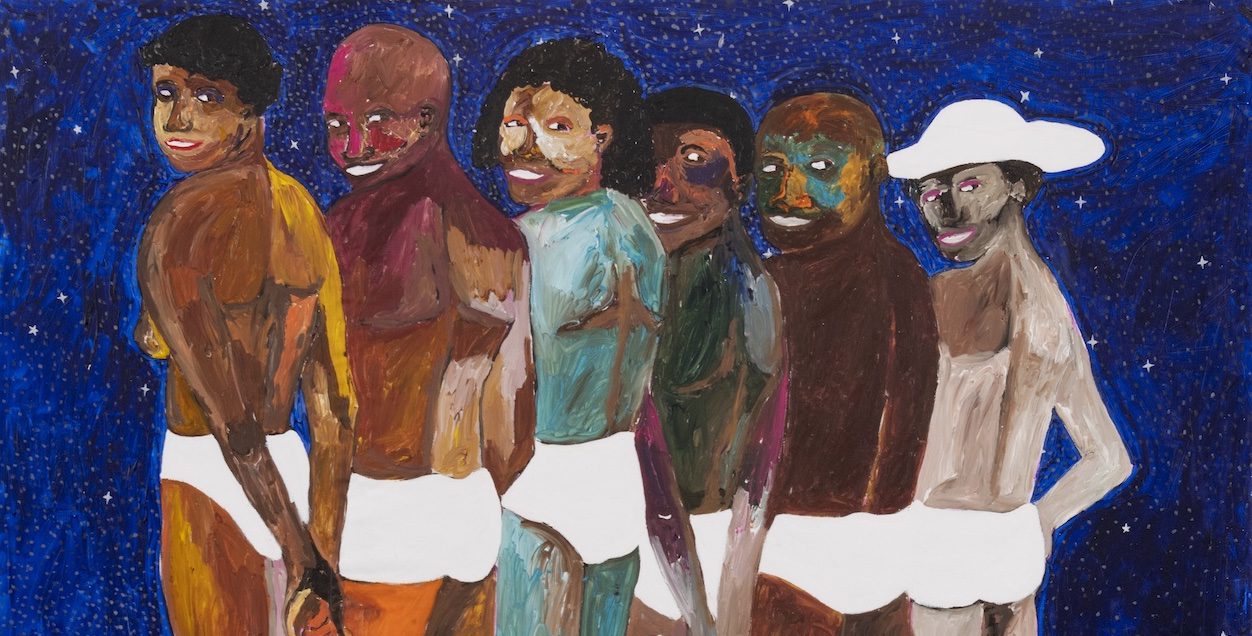 Gideon Appah paints between memory and fantasy, referencing a Ghana of the 1950s to 1980s, helping us – perhaps – to imagine a new vision, writes Joseph Omoh Ndukwu.

When I looked at Gideon Appah’s paintings in his solo exhibition Forgotten, Nudes, Landscapes at the Institution for Contemporary Art at Virginia Commonwealth University, I found gestures toward many things – with the dourness of his palette, the figures in suits smoking, the shy front-facing nude, the nude woman wielding daggers with her back turned to us, the dying (or dead) figure. In these portraits and other figurative paintings, there are allusions to Ghanaian cinema, with references to films like The Boy Kumasenu (1952) and I Told You So (1970). Paintings of landscapes and neighborhoods evoke the heyday of entertainment and film in Ghana, which spanned the 1950s to the early 1980s. And paintings of nudes leave us more than a little curious not only as to their stories but to the place of the individual against the disintegration of cultural memory.

During the mid- to late 1990s, when Appah (b. 1987) was still a boy, cinemas suffered major setbacks as the government sold off 70 percent of the Ghana Film Industry Corporation (GFIC). The corporation had been founded in 1964 by Ghana’s first president, Kwame Nkrumah, and over the years it had become the major regulator and financial sponsor of the country’s film industry. Even the new cinema industry, Black Star Films (formerly Gollywood), which began in the 1980s, was hard hit by the diminishment of the GFIC. Appah’s paintings step in to intervene in this decline. Out of a time that has seemingly vanished, they seem to create a space of remembrance.

The paintings Bliss I (2020), Bliss II (2021), ROXY 2 (2022), and Remembering Our Stars (2021) are, in a curious blend, both mournful and celebratory. For Appah, it is as if looking back is also looking forward, as if remembering is also dreaming. This celebratory nostalgic slant may not at first seem apparent, especially with the dour palette and bleary eyes – and a mood reminiscent of the bleak styles of 20th-century modernism (I think of Amadeo Modigliani, Edvard Munch, Sam Nhlengethwa). It exists not in mood or style but in composition: stance, poise, cigarettes, striking white suits, pants, and socks. All of these speak to material wellbeing, great reserves of cool, and the accessibility of prime urban time.

Several of the paintings in the show are portraits. Even when they present themselves as other things, like a group activity or a neighborhood sketch, they are still portraits. Portraits allow the subjects subjectivity and agency. In Head of an Unknown Woman (2021), an old woman is rendered on a whitish background in charcoal. Her gaze is austere. There are scarcely any blurs or patchworks – the lines are thick and sure – as if to emphasize a personal point that those who are gone are not absolutely gone. The title of the painting reminds me of Toni Morrison’s retort to the title of Ralph Ellison’s novel Invisible Man: “Invisible to who?” As if following the same logic, Appah paintings can help us realize that those who have come before and the inheritances they leave behind are available to us, if we can train ourselves to see.

Appah has spoken of trying to recreate the mood of 1950s–1980s Ghana. This was a particularly interesting and critical time for the world and Africa. World War II had ended, new nations were forming, and old ones redrawing their borders and recreating their national image. Many African nations were gaining independence, Ghana in 1957. It was a time laden with the memory of exploitation yet brightened with positivity and the promise of greatness. Ghana and a host of other African nations that gained their independence saw themselves as rising stars ready to take their place in the new order of the world. This is alluded to in the title and star-studded background of Appah’s Remember Our Stars (2020).

In recreating that mood, Forgotten, Nudes, and Landscapes draws an existential cycle. As its curator Amber Essieva writes, “Throughout the exhibition, there’s a notion of the cycle of life: the brand new, the dying, the decayed and forgotten.” This cycle of an individual’s life is mapped against society, just as society is mapped onto the individual. Both are windows into each other: we glimpse the fall of one in the decay of the other, and the glory of one in the aspiration of the other.

The Older Couple (2021) brings this cycle and mapping into sobering focus. A man lies in bed. A woman sits by him. Both are holding cigarettes, smoking. A flowerpot with orange flowers is on the other side of the bed, contrasting with the marine-blue wall. The couple are in the dusk of their years. Their facial expressions are not clear, but we can feel their despondence and resignation. The cigarettes, the intense blues of the walls, and the whites of their clothes connect the painting to other paintings in the exhibition like Roxy 2 (2021), Two Men Having a Smoke (2021), and The Goodbye(2021). They seem to form the thread of a narrative, from a time when things are bubbly to when they weaken, then to when they disappear.

In TBD (2021), a downcast woman in the nude is twiddling her fingers. Her head is bowed, her sorrow palpable. The dusky browns of the canvas emphasize this. We are so curious about her story that our eyes are no longer focused on her nakedness. In a sense, her nudity seems to shield something from view. Although it remains there, it comes to seem like an obstruction that keeps us from truly seeing her. It is as John Berger writes in Ways of Seeing: nudity is a kind of dress. Since this nude doesn’t present in a sensual way, nor look out at us or invite our gaze, what then is it that she incites us to look at? In the same book, Berger writes that the nude is an object. What is she an object of? Looking at the colors of the background (the earthy red and green) and the sorrow of her attitude (which calls to mind Eve after the fall), I’d say loss. A loss of innocence, of a better time, or some paradisaic home.

In another section of the gallery, as if housed in a room of their own, are landscape paintings. The paintings invoke on myth, fantasy, and memory. In White Castle (2021), an impressive castle sits in the distance in what appears to be a dreamy landscape. The sky, a deep marine blue, is studded with stars. In the foreground is a pool in which the house and stars are reflected. There is an unreal and enchanting quality to the painting. This quality is so well woven with memory that it’s hard to tell how much is remembered and how much is fantasy.

Appah traces the cycle of loss and disappearance, putting the artist and ultimately the individual in a position to contemplate that loss and address it. Memory and imagination become the primary means of this address, so that what is dead and forgotten can be reimagined. Out of that imagination, perhaps, comes the possibility of building a new vision.