A Radical Culture of Listening

Believing is not Knowing

African intellectuals are currently engaged in a tedious business. These days – just like everyone else – they are concerned with extensive migration movements, terrorism, or unstable economies that affect their continent as well. But as if that weren’t enough, in a global context they are often additionally constrained to express the reputed backwardness of their respective home countries. And if they do not do it themselves, others will do it for them. As it seems, Africa continues to be a projection surface for various preconceptions informed by Western ideas. The one-sidedness of this perspective was recently addressed by Achille Mbembe at a festival in Johannesburg. “In the global North, when talking about Africa there’s still too much focus on opinion and seldom on knowledge,” the Cameroonian theorist said on the panel at the Goethe-Institute. With other artists and academics from the continent and the diaspora he had been invited there to discuss about “African Futures” . About a future therefore, that barely exists in Euro-American perception. After all, social dynamics, creative developments, and alternative models of economy were simply ignored in the African context, as Mbembe says. Among other things this was related to the fact that the transfer of knowledge between the West and the rest was still a one-way street. 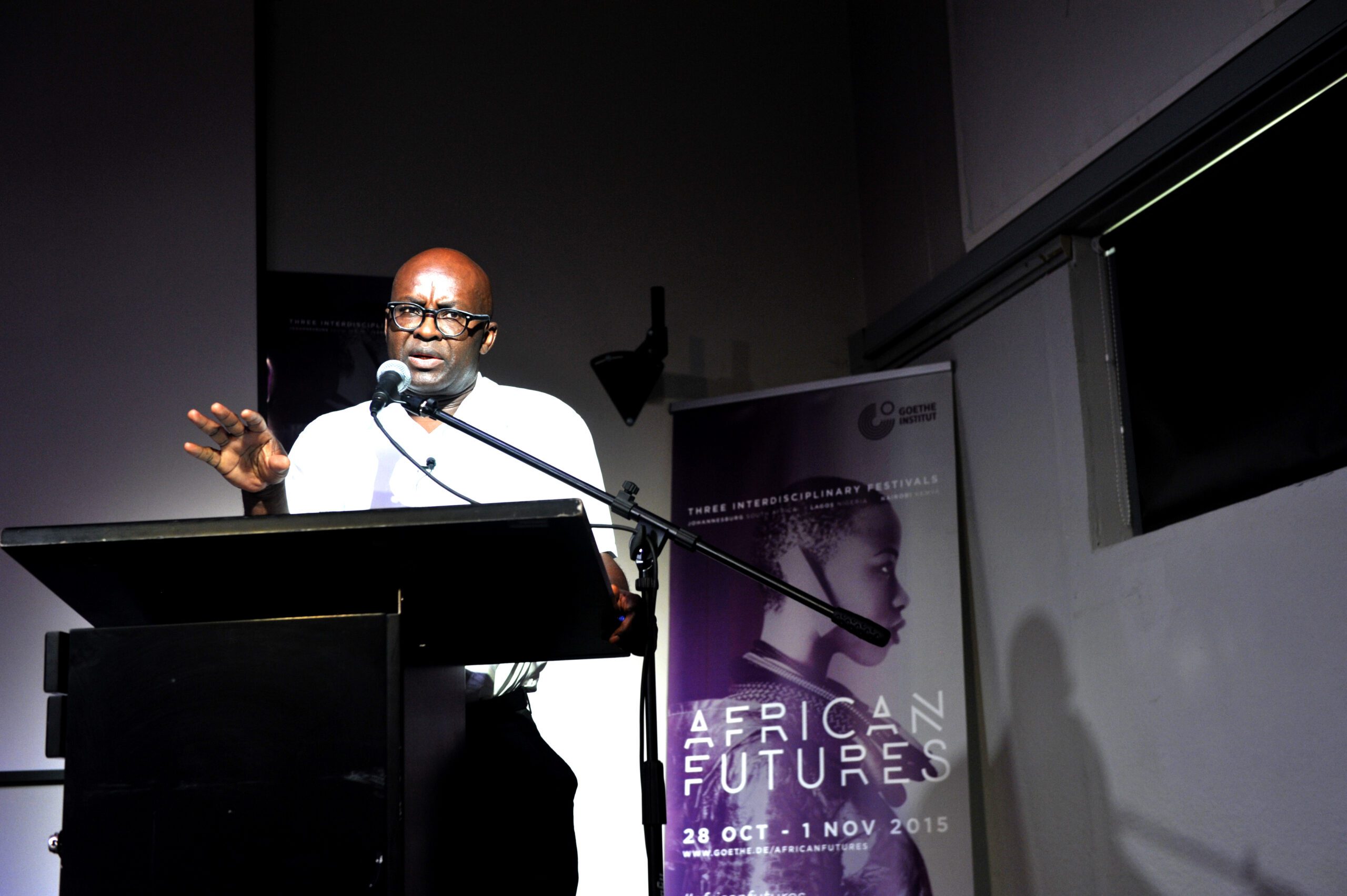 Meanwhile, Mbembe was already alerted to the signs of social change during the festival week on the campus of his own university. That’s where numerous students had gathered in protest to demonstrate for a more just educational system in South Africa. Within just a few weeks the nationwide student protests set a dynamic in motion in the country, disputing old thought patterns and challenging the ANC’s politics at least for the moment. This wave of protest is only one of many that have spread out on the continent in the past three, four years: from “Occupy Nigeria” to the present demonstrations in South Africa. However, apart from the upheavals due to the “Arab Revolution”, not much of this has registered in the West. According to Achille Mbembe, this was only one of the many distortions that had a global effect in the context of Africa. After all, peaceful protests advocating democratic innovation didn’t seem to fit the mould of the worldwide image of Africa. But it was exactly this image that needed to be dispelled. “The basic knowledge transfer between the global North and South needs to be turned upside down,” says Mbembe. By now it should be a thing of the past that one had to allow oneself to be defined by the view of others.

On stage next to Achille Mbembe sits Keziah Jones. Having come all the way from Lagos, the musician tells the story of his childhood. It is a complex story of uprootedness and a search for identity which emphasises the extent to which Africa’s postcolonial history is entangled with Europe’s. It also shows how little this is established in Western consciousness – at best owing to the stories of cultural mediators such as Keziah Jones. He talks about growing up in Nigeria, being sent to the UK for the sake of his education, how he had to learn English and to assimilate, and to discern the distinctions between codes that were right in one home country but wrong in the other. In the meantime he is back in Lagos, today his career as a musician, which began in London, has become an international one, and the flexible to and fro between continents, housing and life situations has become an everyday routine. 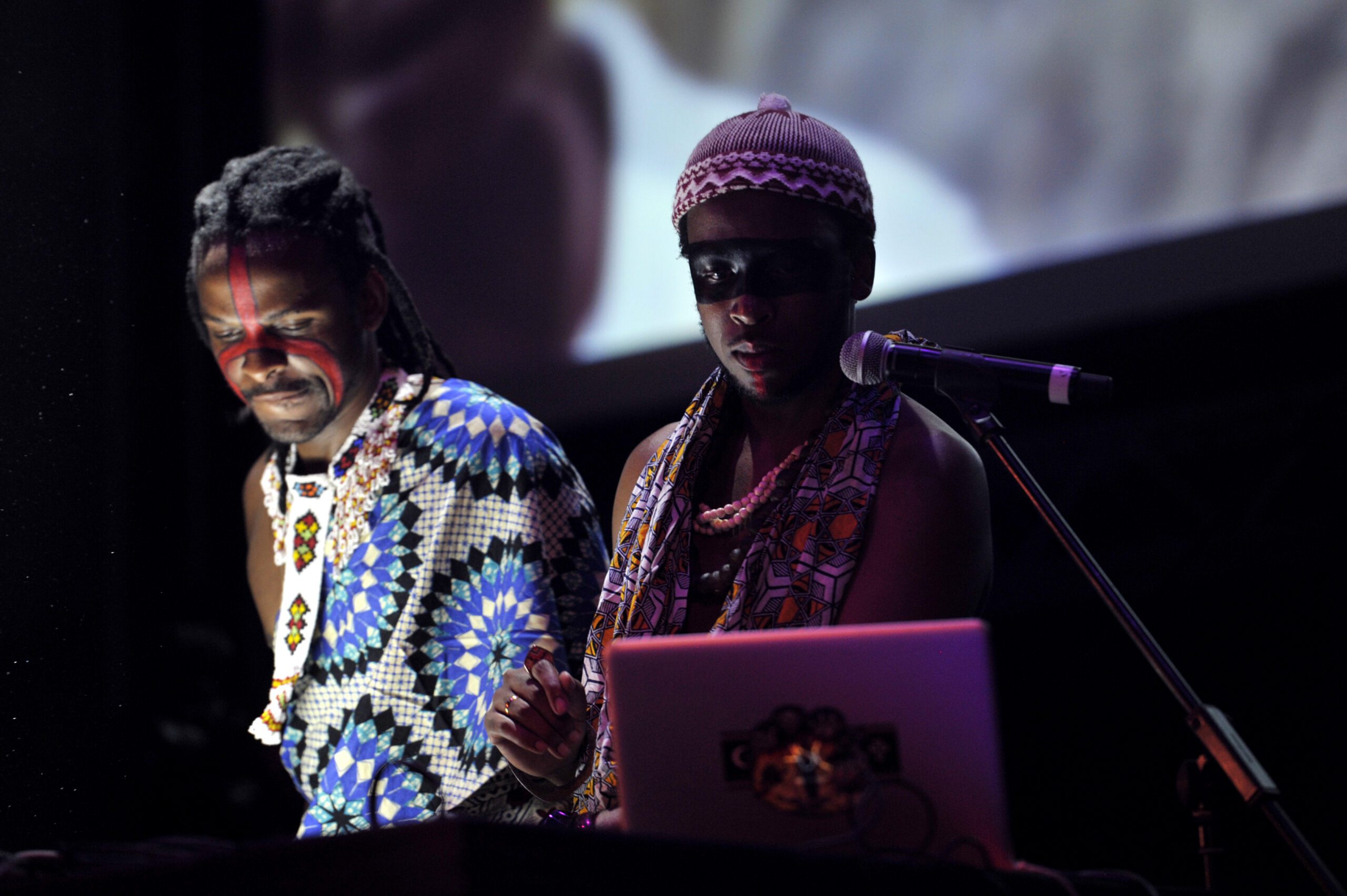 This is a routine most participants in the festival are familiar with. Kapwani Kiwanga also knows the back and forth between possible concepts of home and fragile identities. “Most of the time I feel like an outsider in the process,” she says. At any rate that’s the act she puts on in the afternoon after the panel discussion, when she travels into our present as an anthropologist from the future. In her performance, “Afrogalactica: The Deep Space Scrolls”, Kiwanga represents a woman living in the United States of Africa in 2100 who comes to visit us in our time to explain the world as it actually is from an Afronaut perspective. The prevalent perception of Africa is held up to ridicule in this approach, one which may, however, not be accessible to all audiences.

“That’s exactly what it’s about,” Mbembe had said that morning on the panel. Precisely not about artists and intellectuals with the respective understanding for one another exchanging views. But also about attracting increasing attention to the communication of Africa’s present. “We need to establish a radical culture of listening, and not only among ourselves,” he said. Meanwhile there was a diversity of intellectual and creative voices on the continent and in the diaspora that were confidently speaking about Africa’s place in the global community. Also media such as the magazine Chimurenga offered a rewarding approach, probably the reason for Chimurenga founder Ntone Edjabe to have been invited to the panel as well. He made an appearance per Skype from São Paulo and answered the question relating to the perception of Africa as an outsider vicariously for most of the attendees with a counter question directed at a Western audience: “If I am the other, then who are you?”

Based in Berlin, Elisabeth Wellershaus is a journalist working and is a member of the “10 nach 8” editorial team produced by the weekly journal Zeit.