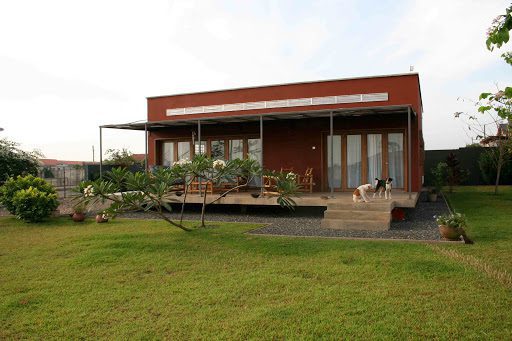 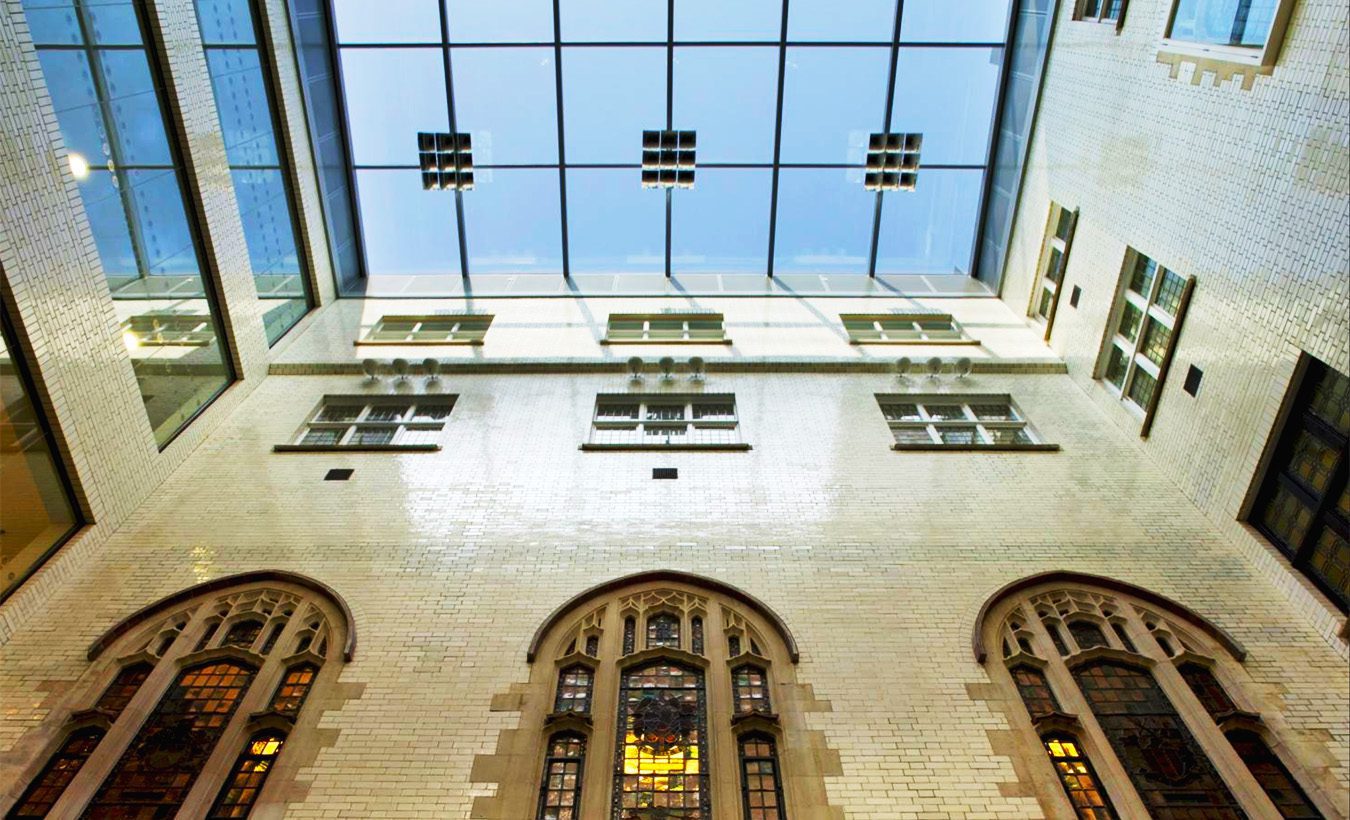 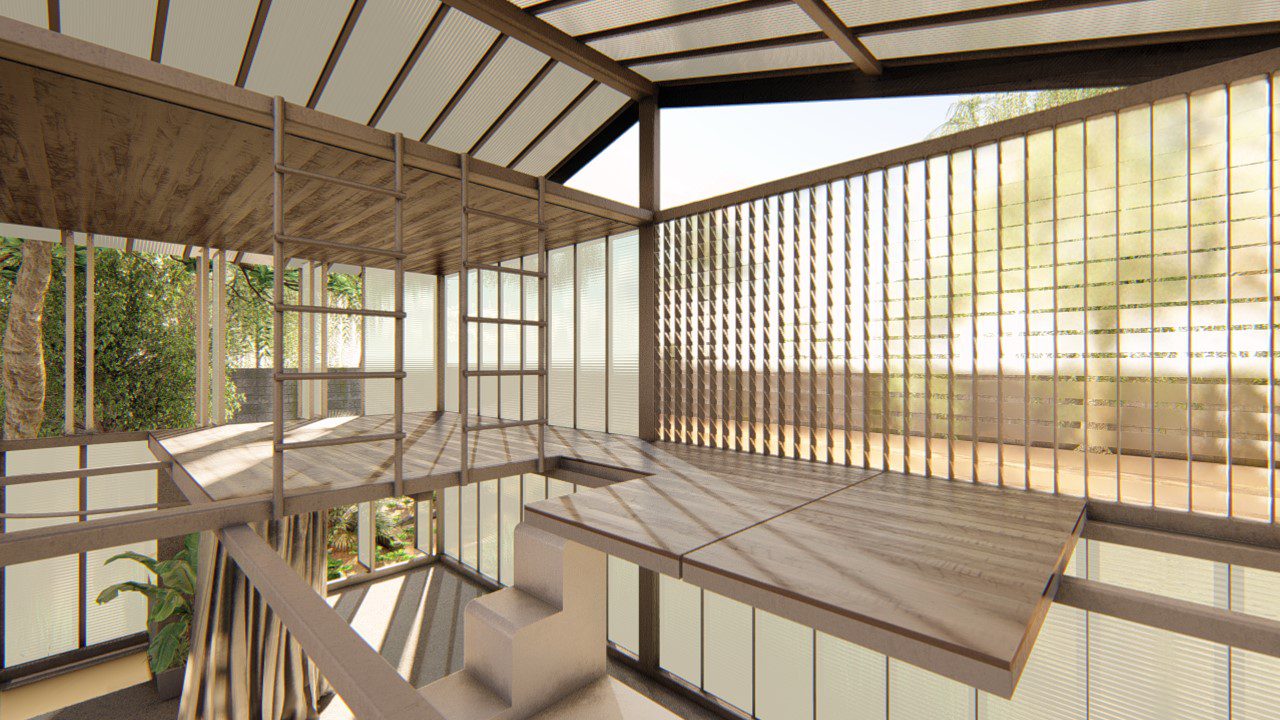 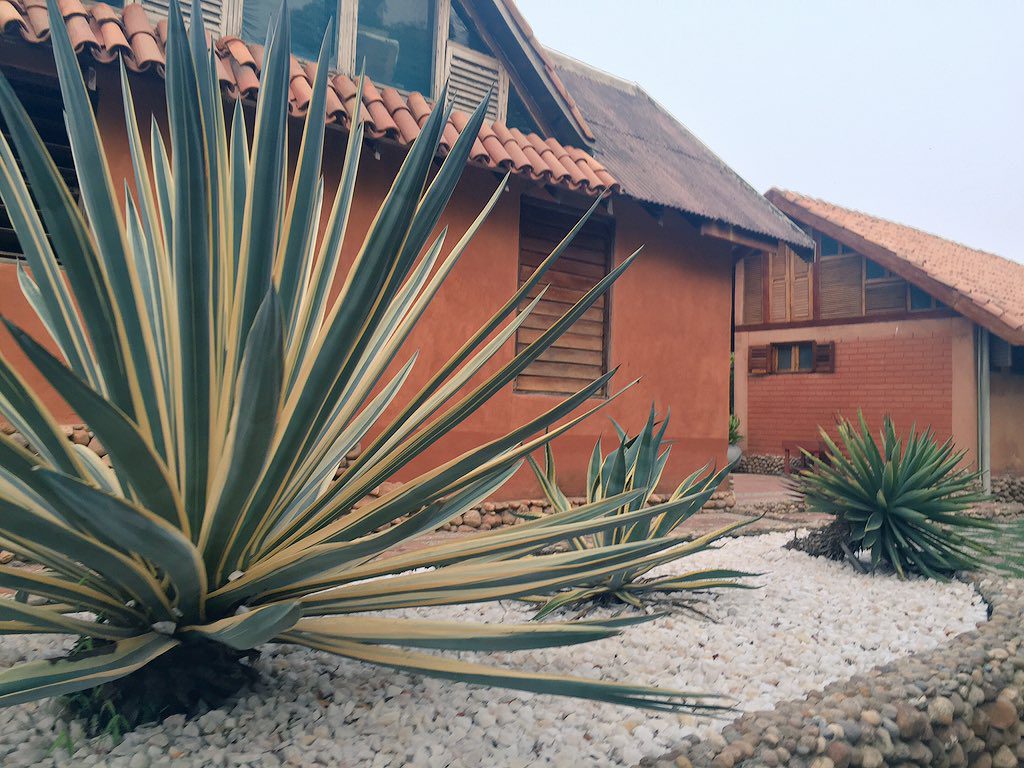 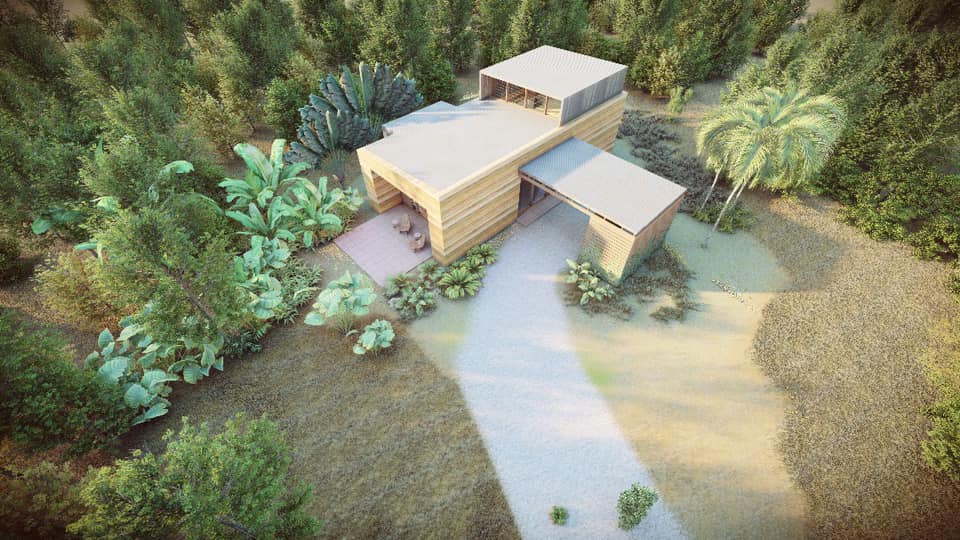 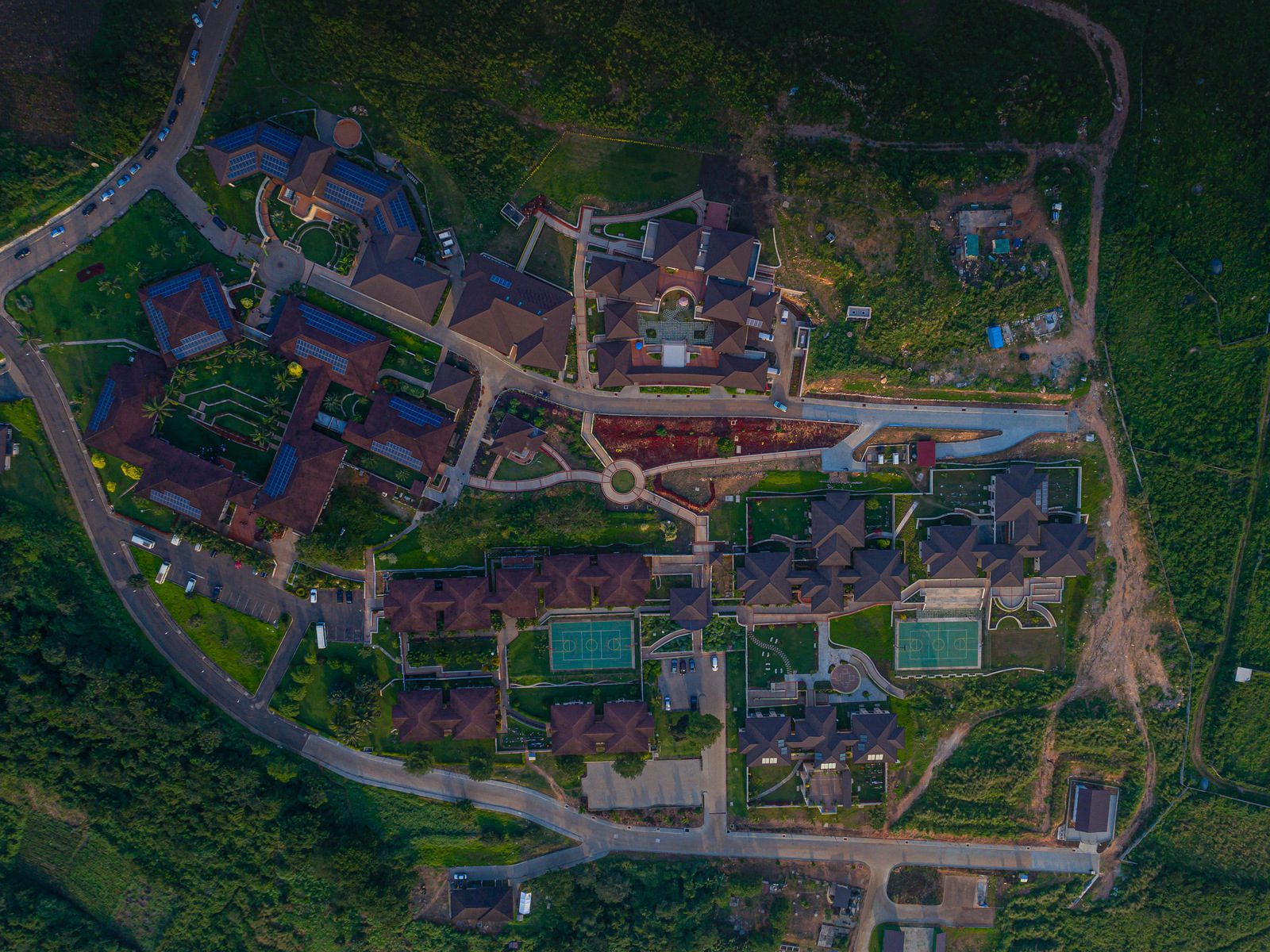 For three generations of women born between Ghana’s independence in 1957 and the turn of the century, architecture has served as an unparalleled incubation platform for worldforming possibilities.

For Alero Olympio (1959-2005), it was the luxurial elevation of laterite as a robust, indispensable material for contemporary architecture; the market activation and architectural resonance of her works remain as powerful today as they were 30 years ago. For Lesley Lokko (born in 1964), who founded the Graduate School of Architecture at the University of Johannesburg and is now former Dean at the City University of New York, it remains the creation of an architectural curriculum that activates boundless, open-ended imagination for the young African architect. In the feverish research of Latifah Idriss (born in 1993), photographing, sketching and decoding ubiquitous kiosk structures in the South, Central and Northern parts of the country, worldforming remains a generative attempt at the formal recognition of design by the masses as a homegrown vocabulary for architectural components and scaling strategies. Contrary to most narratives of urbanisation in the Global South, which appear under siege from the forces of globalisation, the work of these Ghanaian women in architecture offer strong propositions of operating as an architect. Not so much as a reaction to globalisation, but rather has its own roots and complex interactions, among which globalisation is repeatedly encountered as just one of many powerful forces.

Fuelled both by the opening up of a brave new Ghana to a new multidimensional global network, in the 1960 and 1970s post-independence Ghana ushered in a period of massive movement and diverse changes. For the then nine-year-old Elsie Owusu OBE (born in 1953), her family’s move from Ghana to London brought her into an orbit of Caribbean and African families who ended up settling permanently in the United Kingdom. As a child her worldview of “building” and women’s role in it, was shaped by a liberating form of Ghanaian family entrepreneurship or self-build culture normalised as just another ritual of life. At the Architectural Association in the mid-1970s, the student world brimmed with diversity, with a sizeable contingency of Africans and Caribbeans studying in the UK. However as a first-generation Ghanaian woman who had spent her formative primary and secondary education years in London, she represented a minority of black “home” students. After forming her own practice in 1986, she became a partner at the 80-strong practice of Feilden+Mawson, leading projects including the restoration of the UK Supreme Court and London’s Green Park Underground Station. Having stood for the RIBA presidency in 2018, Owusu occupies a singular, pioneering role as an architect and activist from this first generation of Ghanaians operating in the modern West African diaspora.

Although barely a decade separates Owusu from a second generation of Ghanaian female architects, worldforming by a slightly younger generation was deeply shaped by a distinctive period in Ghana’s political history and an economic downturn. The 1970 and 1980s ushered in a high degree of mobility between West Africa and Europe, catalysing this generation of women’s engagement with broad and vastly different architectural landscapes from a young age. As a teenager, Chris Sutherland (born in 1961) of Sutherland & Sutherland, travelled with her father, who worked in Ghana’s Ministry of Foreign Affairs. In 1960 Ghana’s political and economic relations with both countries were undergoing critical shifts, accelerating mutual cooperation between Ghana and the former and political deterioration with the latter. For Sutherland the hotels and spas encountered during these trips began to seed a deep love for architecture, and she enrolled at Kwame Nkrumah University of Science and Technology as one of three women in a class of 22 architecture students.

In comparison to her own student days, immersed in a curriculum that largely looked to other cultures as points of reference, the sprawling Ashesi University campus designed by Sutherland & Sutherland finally looks within to develop a homegrown approach to landscape, circulation and social life. Home to a private university dedicated to educating a new generation of ethical, entrepreneurial leaders on the continent, the masterplan takes on the function of the outdoor traditional family courtyard and spawns its transformation on a much larger scale. Linking intersecting courtyards and outdoor rooms by a network of contoured walkways clad with local stone, the campus’s building clusters sit atop the highest peak across the Berekuso radii of hills. As shown in other projects of vastly different scales and programs, including the Databank Headoffice, Sutherland & Sutherland’s work has developed a perceptive approach to modern Ghanaian ambition through a sensitivity to surrounding context. The expanse of the surrounding lush Eastern Region is omnipresent through Ashesi’s permeable campus, allowing views and ventilation at different scales within and between buildings.

For women architects contemporary to C. Sutherland, whose families began to negotiate residency between Ghana and Europe in their formative years, yet were largely trained as architects abroad, worldforming took on a dexterity in their careers that could not be contained by architecture. Traditional architectural vocabulary, historical references, material palettes and business models were insufficient to contain transatlantic, let alone global, imaginings from the perspective of the 21st century Ghanaian subject. The architecture of the late Alero Olympio took on a long-term experimentation with laterite, the iron and alumina rich clayey soil native to most of Ghana, evolving to express an original form of modern domesticity and traditional thermodynamic intelligence. A. Olympio’s architecture took on tactility at multiple dimensions: the floor was a sensory landscape of cool, smooth, polished earthen and stone materials of different scales; laterite walls were either rendered unprecedentedly flat by a distinctive red-matt laterite finish or its interior cladding exposed as smooth undulating surface, reminiscent of kneaded mud balls used in traditional mounding but coated in a brilliant white. Having commissioned earth-brick machinery for compressed earth bricks in India, A. Olympio championed laterite as a material for development, both for improved road technologies and on-site housing construction. Embodying principles of bioclimatic design and resource efficiency, her buildings proposed technological solutions not merely as a solution to modern infrastructural and energy challenges but as an aspirational luxurious desire for the rising middle-class. Fifteen years after her death, a similar language and aspiration for integrating earth technology is gaining momentum across the country with younger entrepreneurs and architects.

A. Olympio’s activism around earth technology and local materials in the 1990s went on to both directly and indirectly enable the acceptance and use of laterite in contemporary architecture. After years of building up a reputation for delivering world-class buildings and a unique business model for operating in Ghana, the Pata4Two House by Orthner Orthner & Associates is an almost elemental culmination of their championship of earth, natural materials and economics. Operating on the scale of a three-bedroom house, rammed earth foundation and walls define the envelope of its structure. Cross-ventilation through every square metre of the occupied floor plan is achieved by two simple powerful extrusions from the rectangular nucleus oriented along the east-west axis. On the north side, the extension of a shaded area from the middle of the building in plan, and the extrusion to a second storey on the west, offers a versatile housing typology for the modern Ghanaian family. For Rosemary Orthner, Pata4Two represents an architectural archetype, whose scalability, resource-efficiency and design ethos has struck a nerve with a wide demographic of urban African dwellers beyond Ghana. In their practice, led by the husband-wife duo, this has also propelled the work of Akosua Obeng, a young partner at their firm who is leading a derivative clinic project in one of the capital’s largest food markets.

This resonance of active collaboration with young architects as a form of mentorship permeates through this generation of women architects. For Alice Asafu-Adjaye (born in 1969) who transitioned from launching Adjaye Associates branch in Ghana in 2012 to setting up her own firm Mustard Architects in 2015, collaboration with young female designers like Latifah Idriss persists as a form of mentorship and empowerment. In recent years her work as a lead curator in the global Africa By Design exhibition series and the upcoming London Design Biennale representing Ghana serves as a way of bringing Ghanaian authorship to global design platforms. For a younger generation of architects, worldforming has also been accelerated by the homegrown formation of young professional collectives as seen in the activism and projects by Juliet Sakyi-Ansah who founded The Architect’s Project (TAP) and Kuukuwa Manful, curator of Adansisem. These projects have evolved to nurture spaces outside of narrowly oriented and overwhelmed architectural education systems – both in Ghana and overseas – that lack the speed, cultural dexterity and methodological foundations to absorb and equip the young Ghanaian architects of today.

Within a broader global context, this quest to develop worldforming skills has been largely embodied through the work of Lesley Lokko. Parallel tracking her career as a writer, architect and educator, her book White Papers, Black Marks, published in 2000, consolidated a global introspection on race, architecture and identity that could not be contained solely by operating through architecture alone. While her iconic mud-house, House Lokko, and her writings as a novelist offer tangible products along the way, it is her ongoing activism as an educator that offers a generous platform for architecture and the roles of the architect in Ghanaian and global society to develop. Much like Pata4Two, Lokko’s role in growing the Graduate School of Architecture at the University of Johannesburg, from a student population of eleven in 2014 to one-hundred and five students in 2019, has found a diasporic pulse in transforming global architectural curricula and methodologies. Ironically unlike fairly well-understood disciplines such as engineering, medicine, law or even the fine arts, the circuitous pathway to studying architecture, coupled with the diversity of roles taken on by women in the profession, has propelled the discipline’s capacity to serve as an active, amorphous project at a time of unprecedented change.

Perhaps a premonition of the impact of these women leaders within the field is captured in a temporary project by Kuukuwa Manful for a school in Madina market, located in a bustling suburb of Accra. Responding to the need for care for the young children of women market vendors in the early hours of the morning before school, a temporary park was assembled by volunteers using a range of upcycled materials and components found in the market including tomato crates, tyres and woven baskets. During its lifetime, the structure was effective as a play space, encouraging children to arrive at school on time, and over time its architecture became attractive to local residents who began to slowly “pick apart” its elements and integrate them into their homes. Much like Manful’s temporary park project, the ongoing work of these women through architecture aims to give form to solutions responding to widespread needs, yet these remain pit stops in a much larger ambitious worldforming project where architecture and architects are poised to play a leading role.

Dr. Mae-ling Lokko is an Assistant Professor of Architecture and the Director of the Building Sciences Program at Rensselaer Polytechnic Institute in Troy in United States. Lokko holds a Ph.D. and Masters of Science in Architectural Science from the Center for Architecture, Science and Ecology, Rensselaer Polytechnic Institute + SOM and a Bachelors of Arts from Tufts University. Her research integrates a broad range of technical, environmental, social and cultural criteria that questions contemporary material-value systems, codevelops business models for upcycling between the Global North and South and evolves integrated material life cycle design criteria to meet generative justice criteria.

Publication made in the framework of the Season Africa2020 and initially on awarewomenartists.com on 13 December 2020.