What Does Resistance in the Arts Look Like Today?

From the New Museum Triennial’s Songs for Sabotage to the Triennial of Photography Hamburg’s Breaking Point, art institutions today are striving to inspire social and political action. Often this desire can translate into ambiguous and abstract concepts, or even backfire. So how can art be the change in a tangible way? This was one of the concerns addressed in this year’s March Meeting at Sharjah Art Foundation (SAF) in the UAE.

Entitled Active Forms, the three day event addressed concepts of resistance through organizing as a means for artistic and cultural production. Featuring panels and performances by an array of inter-generational artists and art practitioners, MM 2018 enabled discussions on resistance in the arts as a form of “opposition” as well as a catalyst for future planning and dialogue.

Resistance can happen in the form of projects, exhibitions, informal activities, and a combination of all or other forms. This variety is crucial to responding appropriately to the ever more complex issues our societies face but also because action has to be tailored to the specificity of every situation. Likewise, MM 2018 presented a variety of examples ranging from current anti-gentrification art projects to pan-African movements in 1960s Algeria. “I met Neo Muyanga early 2016 when we were both on the jury for the Prince Claus Award. I then invited him to come to Sharjah to participate in our music program,” said SAF’s director Hoor Al Qasimi about the genesis of MM 2018. “Muyanga made several site visits and proposed Songs of Resistance. After many discussions with my colleagues at SAF, we thought it appropriate to make this the focus and theme for the March Meeting and have his performances part of the program.” 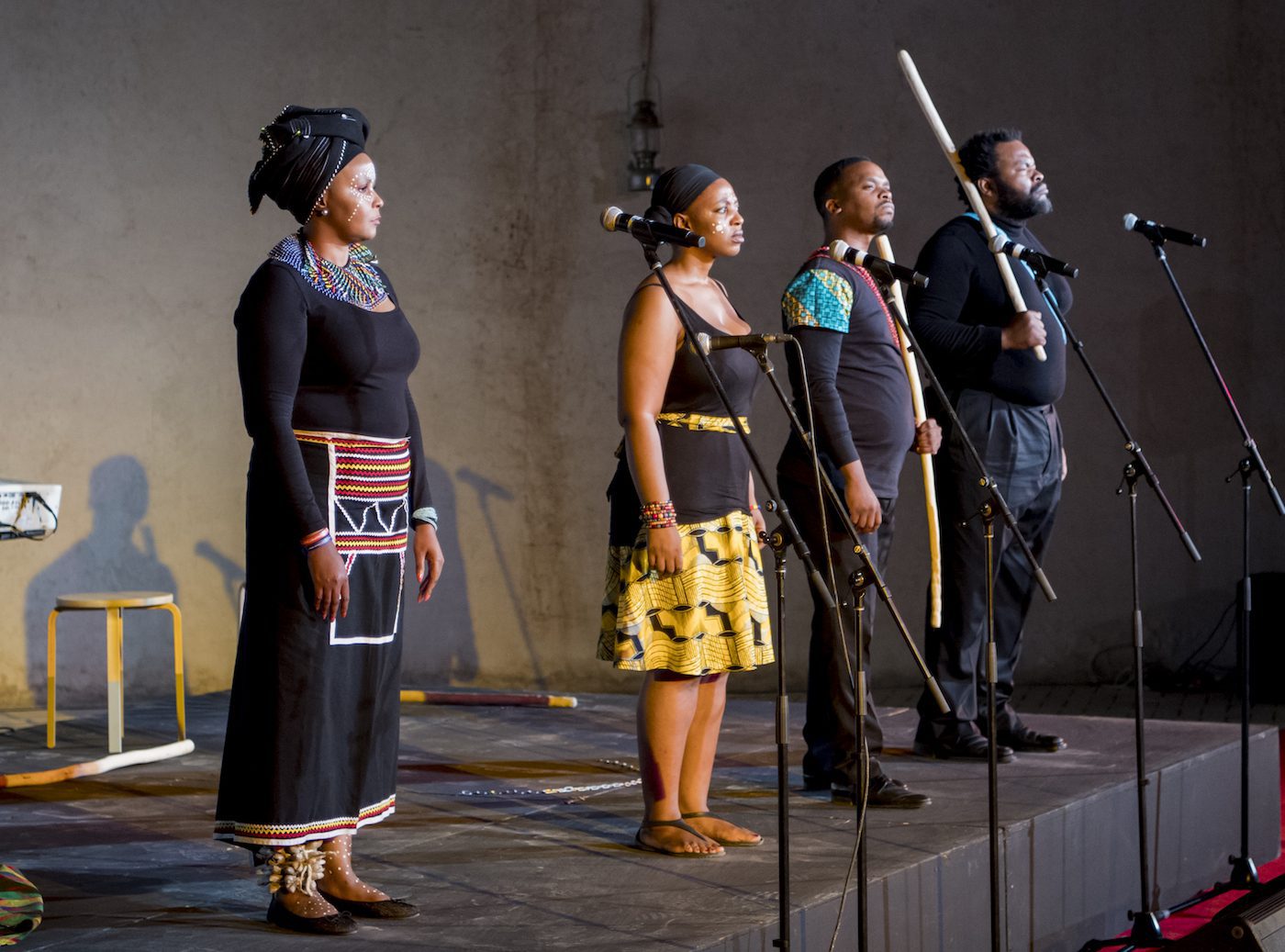 The series of meetings and talks brought together young voices and projects such as DAS Art Project and Cinema Akil, as well as established figures such as Salah Hassan and Rasheed Araeen. In combination, these voices presented past and new ways of making a difference while offering the chance to question these ideas and propose alternatives. The various dialogues and presentations focused on three main areas: the political, the artistic, the social, and the artistic.

New languages and forms for the political

“Resistance can happen in art without a political form,” said Rasheed Araeen to open his lecture. In conversation with SAF’s researcher Saira Ansari, the artist highlighted writing as a vehicle for organizing thoughts, and the need for a new way of writing and looking at things as a means to reach a new form of agency, confront the system, and expose its flaws. “Today’s artists are no longer fighting the colonial order,” he added in relation to non-Western artists’ increasing popularity in the global art market and the political apathy that often follows it. 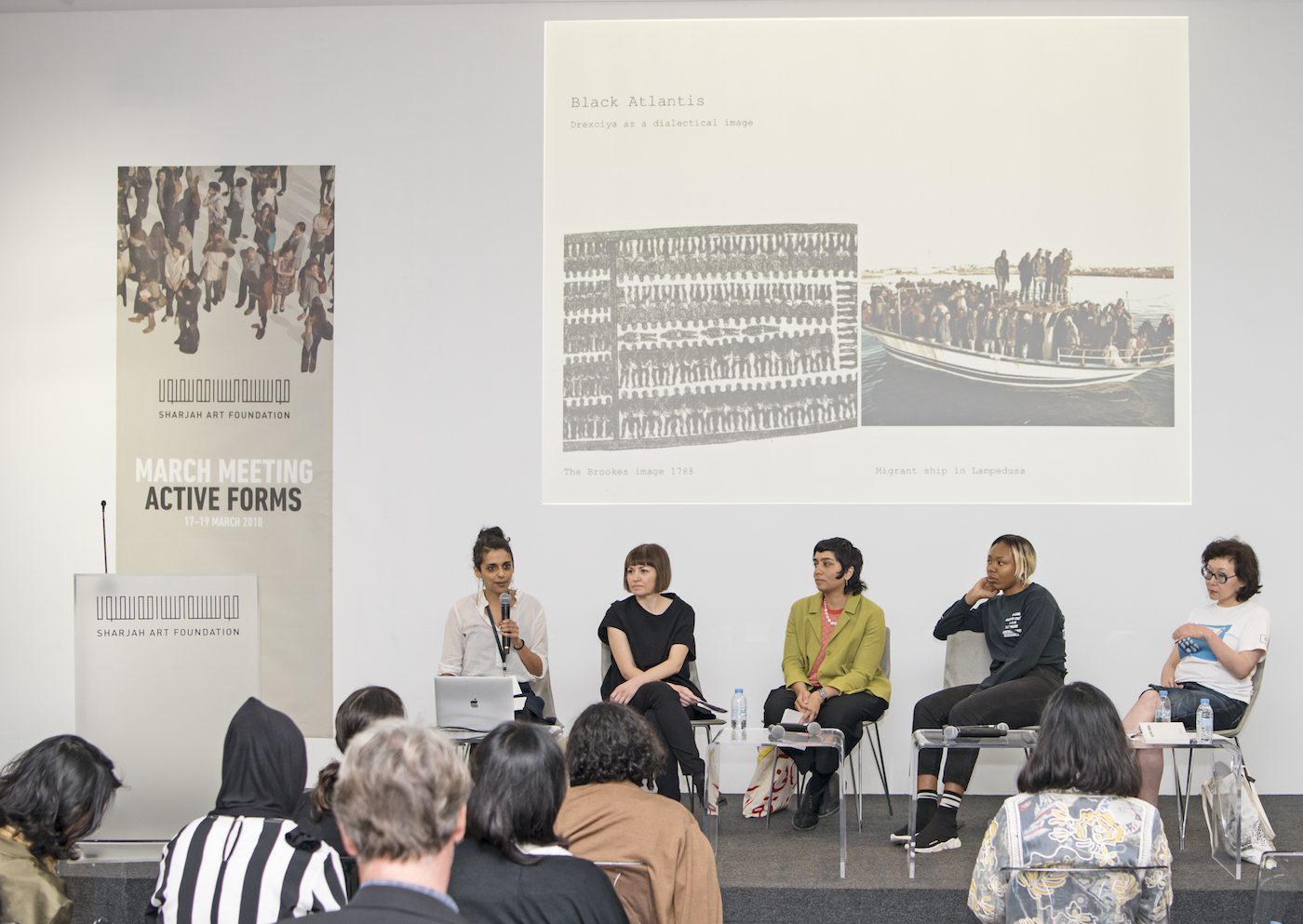 New languages and realities was also a topic in the panel with artist Sarnath Banerjee, writer Deepak Unnikrishnan, and professor Uzma Rizvi. The conversation explored the question of how text, drawings, bodily gestures, humor and magic realism can come to be a language of its own. And while that may sound complex, its main conclusions translated to the role of fiction as an alienating tool that creates more identities and possibilities, and better ways of writing about othered groups such as the refusal to italicize vernacular.

In another talk featuring big names of the arts and academia, Manthia Diawara, professor of the Institute of African American Affairs at NYC joined Cornell University professor Salah Hassan to discuss the significance of material culture in his approach to historiography. Their talk also tackled the “amnesia” in the relationship between the Arab world and Africa while looking back at how Africa in the 1950s and 60s played a major role in freedom movements and the decolonization process in the world. They also highlighted other less known connections such as how Malcolm X changed his politics after his visit to Saudi Arabia, which put in perspective the newly established relationship between Trump and Bin Salman. 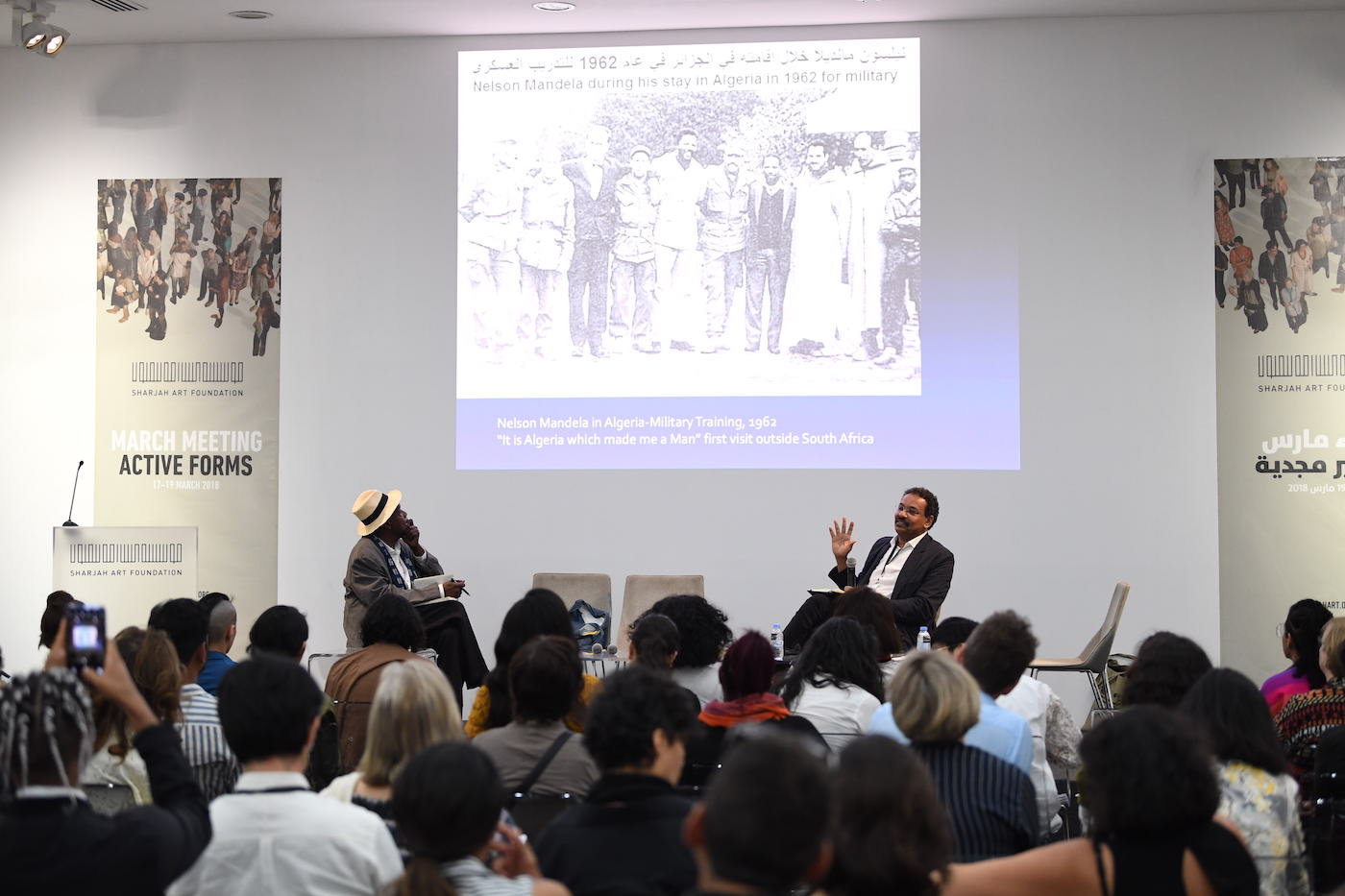 The importance of self-organizing, community and architecture

On the grassroots community level, there were plenty of talks exemplifying past and ongoing successful projects. Abir Saksouk of Public Works presented a project that resists gentrification by mapping it while engaging with knowledge production with locals that is not exclusive to academia nor in English. Naeem Mohaiemen presented Mutiny Party, a South Asian club night in NYC that later became known as a political group formation. “Alternative spaces have to take over, rather than merely making space,” emphasized the artist who also contributes to Samar Magazine. Curator and publisher Sharmini Pereira talked about her project Raking Leaves, a nonprofit publishing organization, and books as an art form as a means to democratize art. On the same topic, Aboriginal artist Dale Harding also told his experiences in Australia where he showed art done with his community in a white cube. Architecture was explored further in a panel with Manuel de Rivero of Supersudaca, Mona El Mousfy of SpaceContinuum, and Yoshiharu Tsukamoto of Atelier Bow-Wow, discussing architecture and conservation in relation to accessibility to housing and social spaces. “It’s important to look at architecture in this context and discuss the various issues we face in terms of urban planning, housing, social spaces, and how architecture can contribute to enhancing the lives of the population,” said Hoor Al Qasimi who also moderated the talk. “And to not just look at architecture in terms of large-scale glamorous projects and endless towers.”

Art as protest and resistance

Beyond the talks, there were performances and poetic moments throughout the days. Wael Shawky reinterpreted the French poem about the Crusades, La Chanson de Roland, from an Arab perspective. The performance consisted of 20 fidjeri singers and musicians performing in the traditional style of Arabian Gulf pearl divers alongside selected passages from the text. Hajra Waheed drew parallels between legacies of colonial violence and her intimate family story through a performance of light and shadow. And Neo Muyanga presented a few of his collaborative works with local singers of all ages. For Naham the artist invited singers across the Emirates to form a choir for a performance of various resistance songs. These were also based on naham (pearl ship singers) historical tales of toil and struggle. While in Tsohle (meaning “all things” in Sesotho) the composer disrupts musical narratives of struggle with four singers performing South African church hymns and apartheid protest songs. 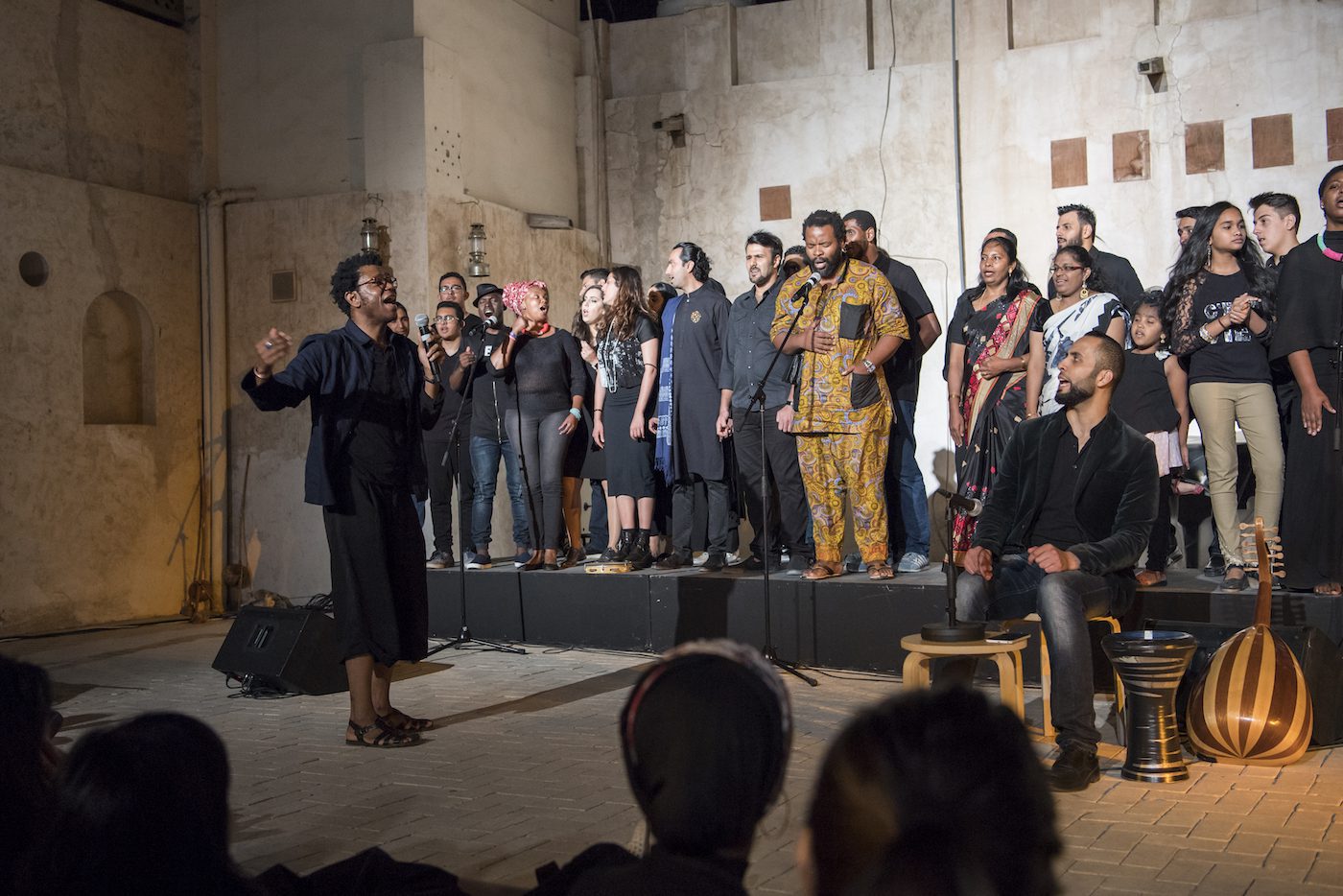 Protest and resistance as concepts are as old as the world. SAF’s March Meeting 2018 explored a wide breadth of actions and ideas that map resistances’ history, variety, and effectiveness. MM 2018 presented resistance as a challenging yet rewarding act that art can contribute greatly too. Perhaps one of the main takings from the talks was that with so many options to bring about change, we mustn’t be naive. “As artists working with the local community it is always very important to acknowledge our privilege,” said Yaminay Chaudhri of Tentative Collective, a group of people who share resources to create collaborative works of art in everyday urban spaces in Pakistan. “And equally important is to acknowledge the agency of the people we want to work with.”