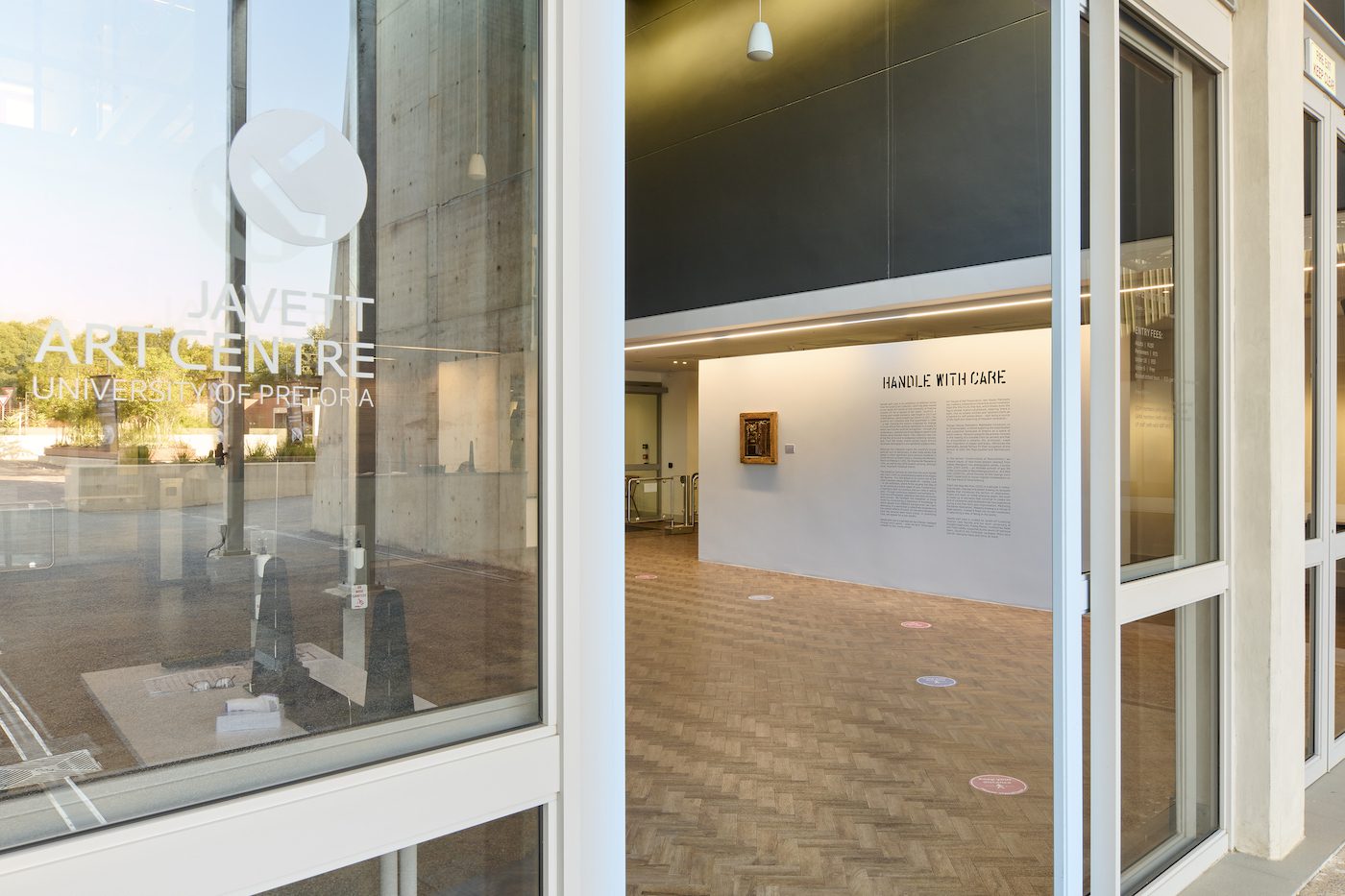 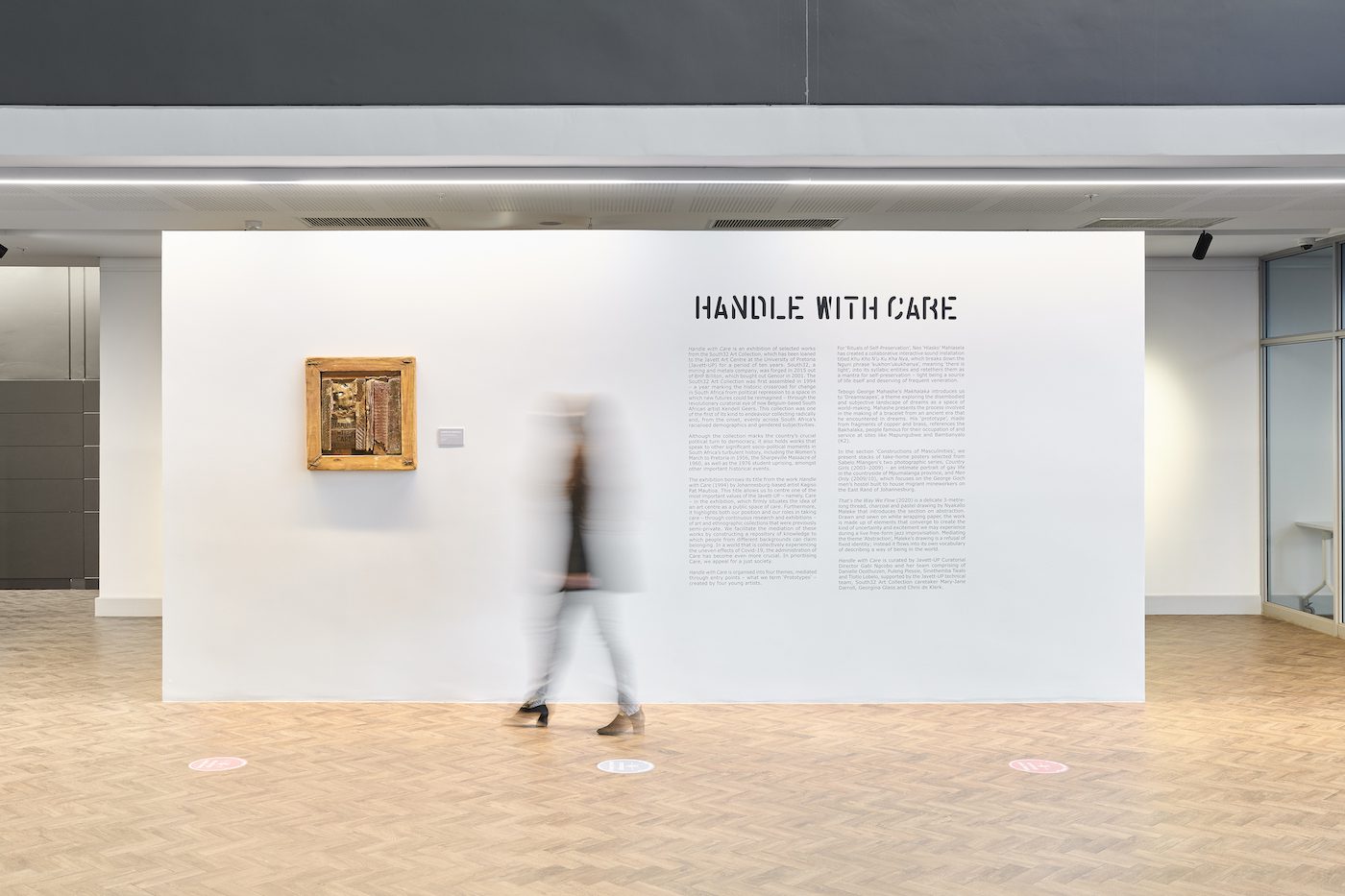 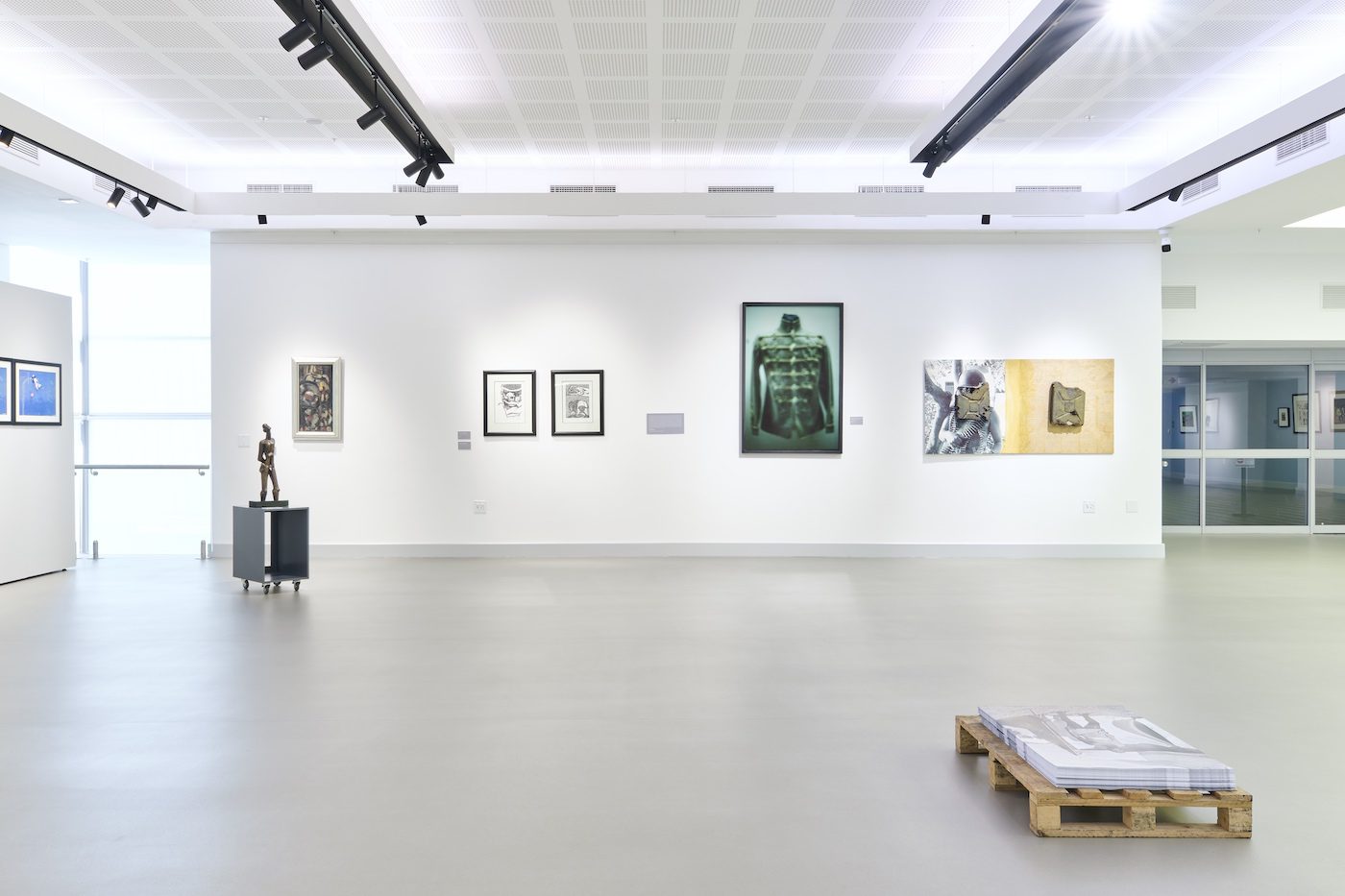 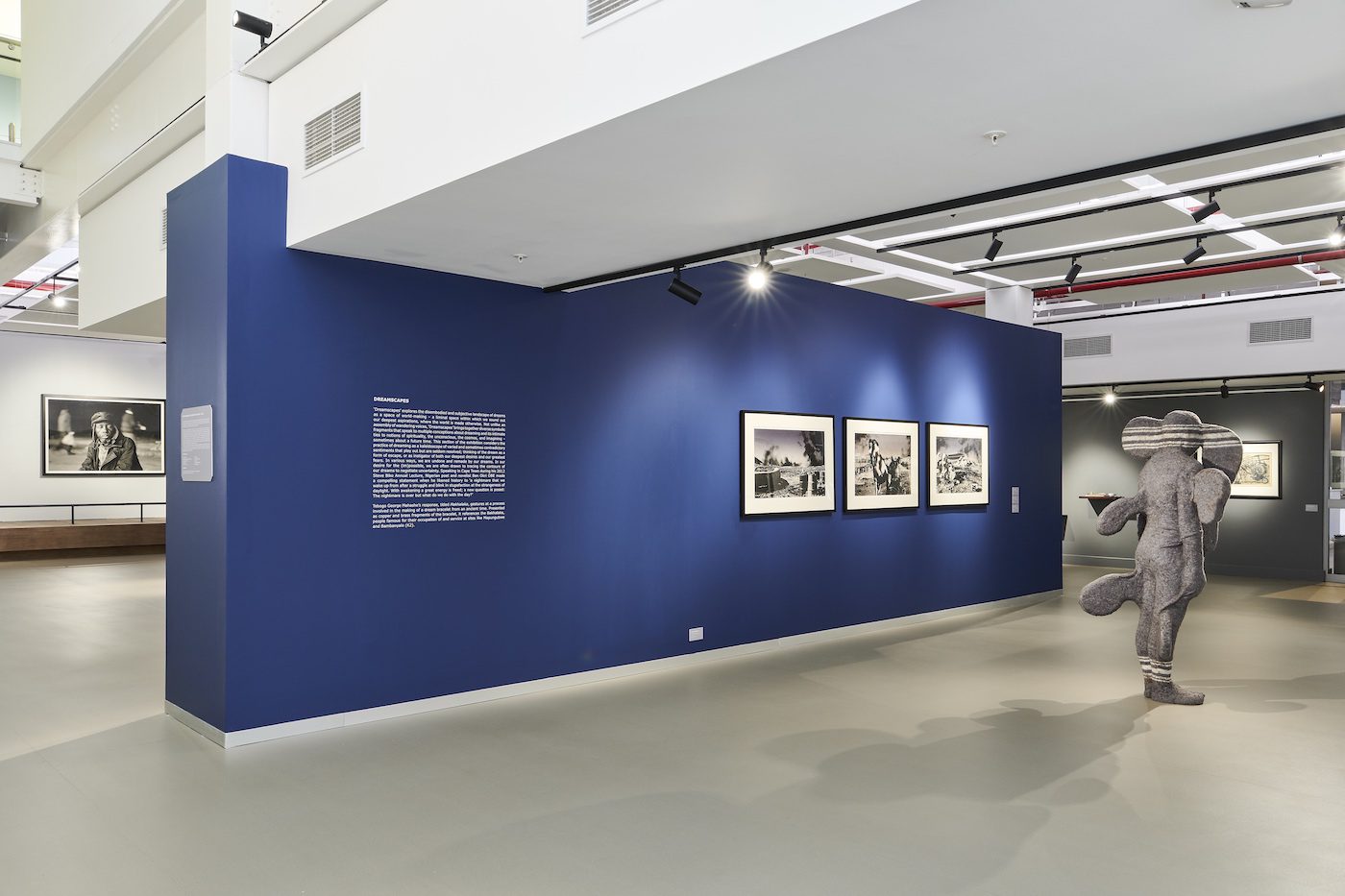 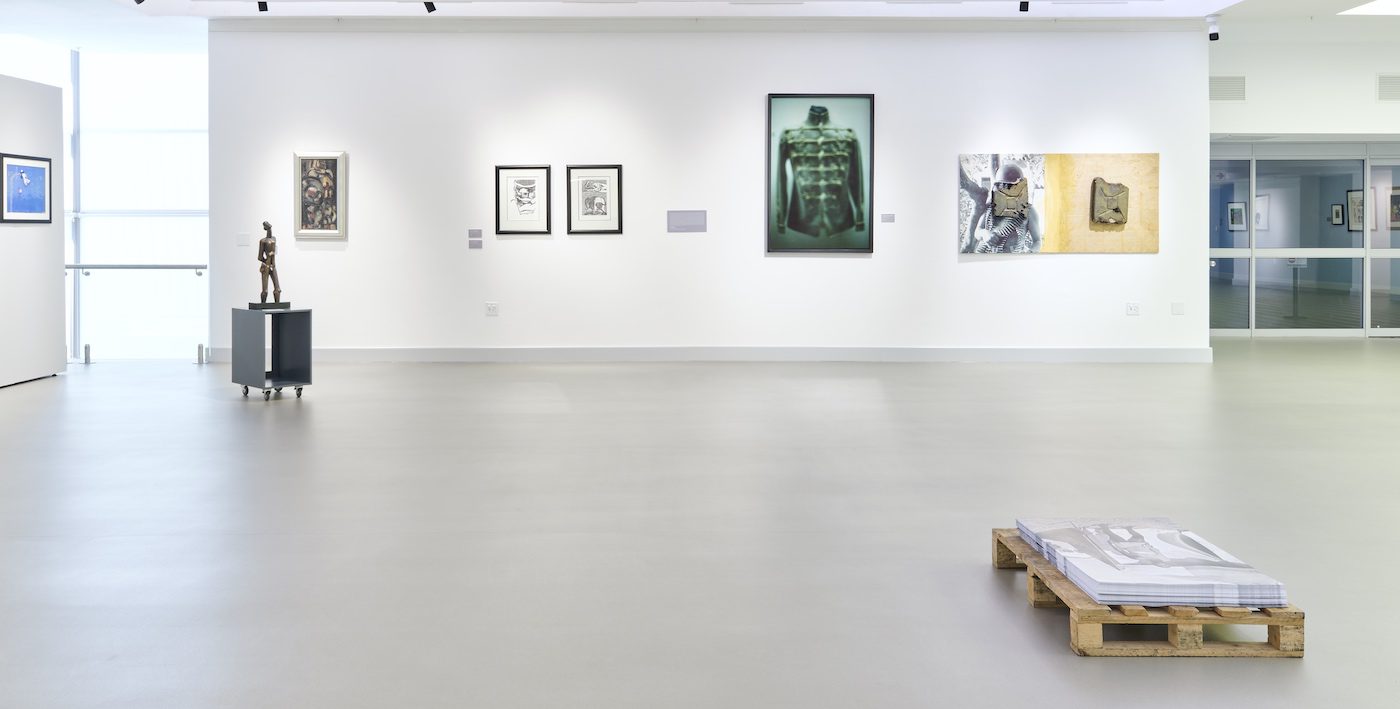 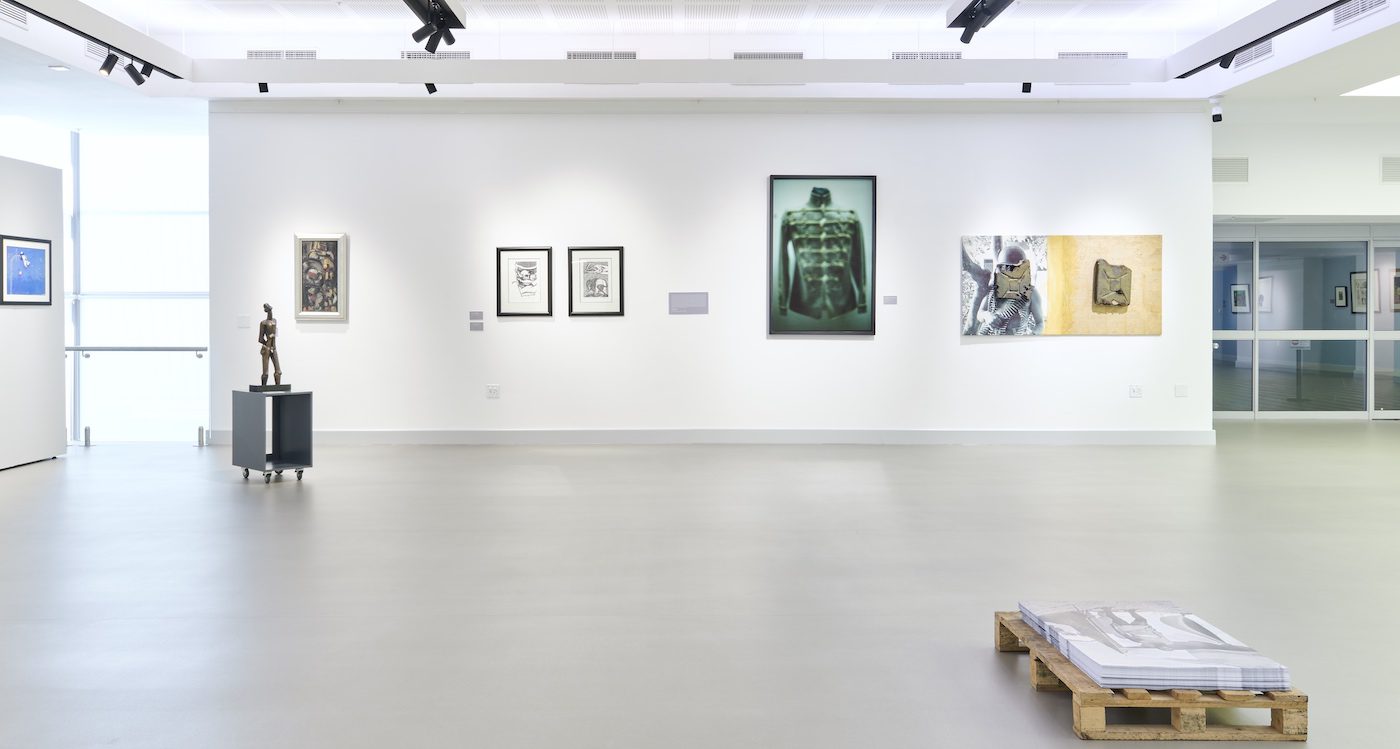 Since Gabi Ngcobo has started as curatorial director at a large Pretoria based art center, she has been probing institutional conventions and questions of diversity.

What to make of presences that unrelentingly haunt the museum? I am referring to presences that shape the museum’s symbolic importance as a repository of culture. As Karl Marx cared to inform us, specters can haunt in overt and impervious ways. There are particular kinds of ghosts – be they cultural or ideological – that are just so arrogant, and as Aimé Césaire remarked in his resignation letter to the French Communist Party, “these are not the kinds of ghosts that one can ward off with a mechanical phrase.” What warrants the notion of the specter as the ideal descriptor for the many hovering presences that oxygenate the modern museum, which the Javett Art Centre at the University of Pretoria (Javett-UP) resembles in its physical and ideological architecture? This question fermented in my mind and anchored my thinking when I sat down with the recently appointed curatorial director of the Javett Art Centre, which lies adjacent to the university in the capital city.

Gabi Ngcobo is currently faced with the myriad tensions around directing such a major space. Yet she brings vast knowledge and experience to the task. Having worked on multiple continents, curating exhibitions such as the 10th Berlin Biennale in 2018, she has shown an ability to complicate conventions and provoke reflections on even the most mundane aspects of and around art in order to bring life to her curatorial projects.

Together with her long-time collaborator and interlocutor Sinethemba Twalo, Ngcobo is now shaping curatorial practice at the Javett-UP. The two seem to convey a clairvoyant understanding for each other when speaking about the strictures of adhering to institutional conventions and the ideological significance of disrupting them. Indeed, the fact that the Javett-UP has in its fold Ngcobo and Twalo, two of the ideologues behind the cultural platform “NGO – Nothing Gets Organized,” is both curious and resonant, for in exchange with NGO’s third member Dineo Seshee Bopape this troika thrives on reading, questioning, and undoing the foundations of modern art institutions with all their burdens.

Ngcobo acknowledges that the Javett-UP is an institution seeking to find a firm ideological footing within a private museum arena which is also occupied by the Norval Foundation, the Johannesburg Contemporary Art Foundation, and the Zeitz Mocca – institutions birthed by the specters of white capital. She is aware that the Javett-UP, with its imperative to “set new benchmarks in art curation, conservation and education,” has art collections that need careful re-mediation and even more careful curatorial treatment. In the physical and ideological vaults and corridors of the Javett-UP, Ngcobo has to make sense of and give life to the permanent art collections that it houses.

Ngcobo had already extracted some works from the Javett Art Collection for the much-discussed exhibition All in a Day’s Eye: The Politics of Innocence in the Javett Art Collection (2019–20) at the centre, which included the controversial pastel drawing The Wedding Party (1996) by artist and convicted murderer Zwelethu Mthethwa. The institution also boasts the AngloGold Ashanti Collection and the archaeological Mapungubwe Gold Collection, which was purposely thematized in the architecture of the building itself. The Javett-UP also has on loan what is now known as the South32 Collection, previously named the Gencor Collection (1994–2002) and BHP Billiton Collection (2002–15). In her role, Ngcobo has the room to think about the significance of the artworks forming these collections and how the institution might take some of that signficance away from them. She can ask: how relatable are these works?

This seems to be a pertinent concern shared by renowned artist Kendell Geers, who in 1993, upon assuming his curatorial post for the South32 Collection, found its dearth of artworks reflecting the richness of South Africa’s rapidly evolving socio-political landscape objectionable. Geers was insistent on this issue – slaying the specter of exclusion to reform the collection around artworks which sufficiently captured the zeitgeist. He explained this adequately in a 1997 catalogue: “the core of the collection […] consists of a group of ten works that have been curated thematically to embody the spirit of the time between Nelson Mandela’s release from prison on 11 February 1990 and his eventual election as president on 27 April 1994. This period is unique and will in all likelihood never be matched in South African history again.”

Under that guiding principle, artworks such as Mmakgabo Helen Sebidi’s Running to the Moon (1993) or Gerald Sekoto’s iconic Song of The Pick (1946) came to henceforth form part of the vertebrae of the collection. Ngcobo undoubtedly shares Geers’ predilection for a far more diverse art collection. The central questions that have informed her engagement with similar corporate local collections are: “where are the Black artists?” and “where are the women artists?”

Undoubtedly Ngcobo’s questions direct attention to issues of inclusion and institutional transformation – relentless specters haunting contemporary South Africa at large. But what does transformation actually mean in contexts where Black peoples have been systemically rendered invisible and stripped of their agency? This particular institution has tried to address this quandary by being deliberate about a couple of things: for instance, in their strategic deployment of Black practitioners in various capacities contributing towards the ideological trajectory of the Javett-UP. Alongside Ngcobo, the Javett-UP recently appointed the former head of Market Photo Workshop, Lekgetho Makola, as its new CEO.

Perhaps this formidable ensemble will collectively do the necessary work of re-imagining the functions of these big contemporary museums and art centers. And if this is too great a task, at the very least they might find more engaging ways of dealing with fraught art collections such as the Javett-UP and creating exhibitions that speak back. When Pfunzo Sidogi, an art historian undertaking research for the Javett Foundation, advised that one of its recently assembled collection of black modernists be named after Bongiwe Dhlomo-Mautloa, who was commissioned to put it together, this was a gesture replete with symbolic importance.  And yet while gesture is efficacious in as far as realizing institutional transformation, one expects itnot to remain at the level of symbolism, and that the curatorial treatment of such a collection, ballasted by the gravitas of such prominent Black female figures in the arts, also does the ideological work of re-examining and reimagining the complex histories unfolding in these artworks.

Since it opened its doors in 2019, the Javett-UP Art Centre has gone about framing itself as a formidable institution to be reckoned with in the contemporary art scene. It seems to have the makings of a world-class facility. In the meantime, it is certainly interesting to observe how it is negotiating its existence in a country riddled with fraught histories and how those histories are being framed in its corridors.

Thabang Monoa is an art historian and independent curatorial researcher currently based in Johannesburg.