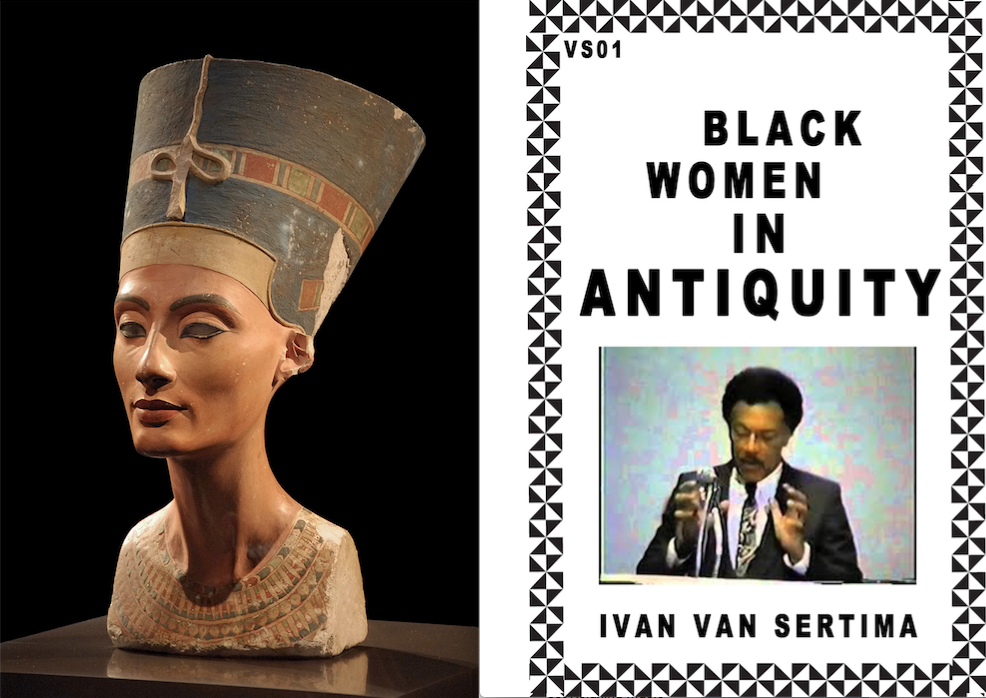 In a new series C& and ArtsEverywhere commission essays and articles inspired by one of the books in C&’s Center of Unfinished Business at the moment installed at the ifa Galerie in Berlin. In this first essay German scholar and author Fatima El-Tayeb explains how European institutions have consistently appropriated Black historical personalities, while denying Africans their own history

The most famous African woman of antiquity – arguably one of the most famous women of antiquity, period – is almost German. In fact, each year hundreds of thousands travel to the nation’s capital, where she has been living for a century, to catch a glimpse at her famous portrait. I am of course talking about the Egyptian queen Nefertiti.

Nefertiti’s bust is housed in Berlin’s Neues Museum on the city’s famous “museum island” and the German government steadfastly refuses to return it to Egypt, despite Egyptian authorities demanding exactly this since 1925. In justifying their rejection, German officials do not actually claim Nefertiti as a national treasure, rather, they claim that she belongs to the world. When Germany denied the Egyptian request for the last time in 2011, the Under-secretary of Culture declared: “Art is part of the universal human heritage and – wherever it is – should be made accessible to as many people as possible.” And this accessibility happens to be given in Berlin rather than Cairo – accessibility at least to the people who count, since much of the world is not allowed into Europe, especially people from the regions the art filling European museums was stolen from during colonialism.

And it was stolen indeed; the colonial laws that European nations cite to assert their contemporary claims were based on the West’s right to exploit the “racially inferior.” The enlightened universal museum celebrating European humanism was only possible because European powers could acquire art for nothing. And they continue to profit: the Neues Museum without Nefertiti (or the Pergamon Museum without the Ishtar Gate) would be a significant blow to Berlin’s tourism industry and could cost the museum island its status as a UNESCO world heritage site. Nor is this a thing of the past: art is becoming an increasingly important investment for the rich, but also for multinationals directly involved in neocolonial exploitation. Iraq was raided not only during the 19th century but also after the US invasion in 2003. While the protection of pre-Islamic art from ISIS provides additional legitimation for the West, the lucrative trade with Iraqi and Syrian art sold primarily to Europe, the US, and the Gulf remains as unexplored as the destruction of historical sites to build US bases.

The issue of stolen cultural artifacts is a small, but significant part of the debate around the colonial legacy. The 15 Caribbean nations who form the CARICOM addressed this directly in 2013 when they invited Europe to a “reparative dialogue” on the aftereffects of slavery, colonialism and genocide (their call remains unanswered). The immense financial value of stolen pieces like the Nefertiti bust, estimated at €350 million, raises the question of financial reparations, but colonialism also included systematic cultural brainwashing: in state and missionary schools the “natives” were taught European superiority and their own inferiority and lack of culture (meanwhile, the colonizers systematically stole as many of the supposedly non-existing cultural artifacts as they could get their hands on). Africa in particular became the continent “without history.” Centuries, millennia even of cultural exchange were erased from historical records. Meanwhile, testaments to African culture such as the Nefertiti bust are claimed as a “universal human heritage” that is actually understood to be largely European. It is significant that the museum island housing the bust is devoted to art from “Europe and the wider Mediterranean,” while African and other “non-European” artifacts will be concentrated in the Humboldt Forum. The sneaking inclusion of “the wider Mediterranean” into Europe’s cultural heritage is especially grating since currently the Mediterranean stands for a cultural, economic, religious and political divide that literally marks the world’s deadliest border (in particular for people from “the wider Mediterranean”). It is also the continuation of a long Western tradition of separating Egypt from the rest of the continent (insisting that if it produced a significant civilization, it can be neither African nor Black).

The writing and presentation of dominant historical narratives – of which museums are a primary site – is as much about hiding as about making visible, about pretending that history unfolds automatically and inevitably, that the present necessary follows a past that logically led to exactly this here and now, about erasing alternative pasts that point to the possibility of different futures. But there always also exist counter-narratives reminding us that neither the past nor the future is set in stone. These narratives offer the context necessary to understand the dominant historical truths as subjective and serving particularist interests, interests that can and should be challenged. Ivan van Sertima’s Black Women in Antiquity is one such counter-narrative, tracing the long and ongoing history of Black women in Africa and the Diaspora, allowing us to reclaim Nefertiti as not merely a colonial trophy but as part of this – our – history.

Fatima El-Tayeb is a German historian and author and currently a Professor of African-American Literature and Culture at UC San Diego, California, USA.

C& Center of Unfinished Business is at ifa-Galerie, Berlin, Germany, until 30 March 2018

1) Cultural Institutions: Europeans have invested in the development of institutions such as museums and research centres in order to prepare their citizens for an understanding of their imperial history that defined them as rulers and beneficiaries of slavery. There are no such facilities in the Caribbean where the crimes were committed and the victims left disenfranchised in respect of their institutional and cultural experiences and memory. This crisis must be remedied.

2) Cultural Deprivation: The primary cultural effect of slavery was to break and eradicate African commitment to their culture. African culture was criminalized and the cultural basis of identity shattered. Africans were deculturalized and today remain impoverished in respect to cultural legitimacy and supportive appropriate institutional arrangements. These matters represent the colonial legacy of slavery and must be addressed.