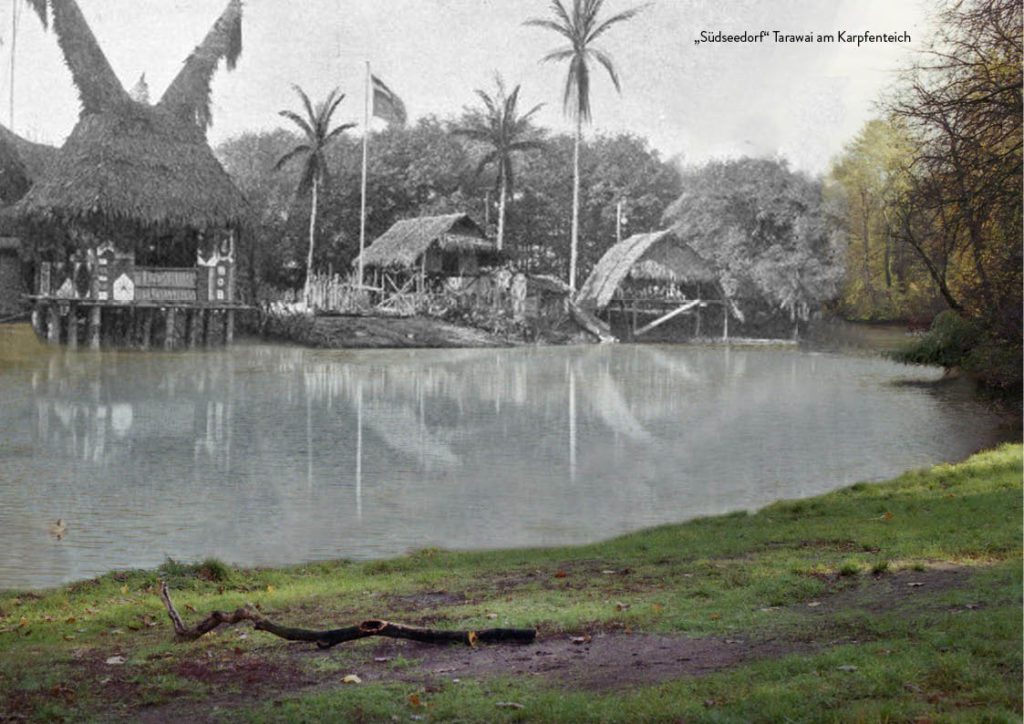 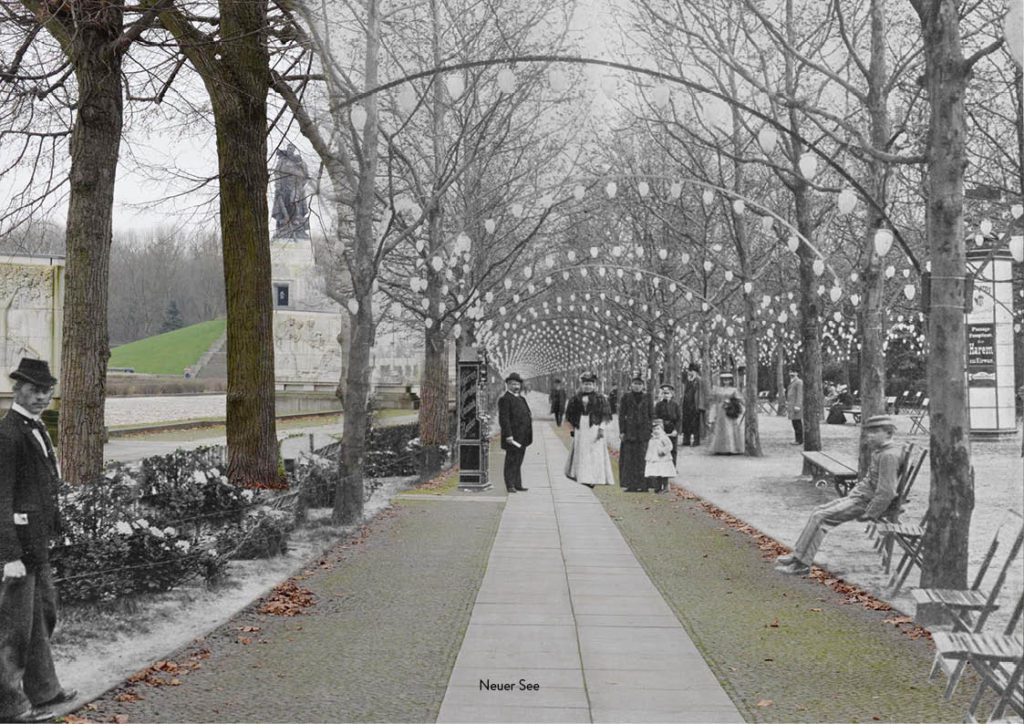 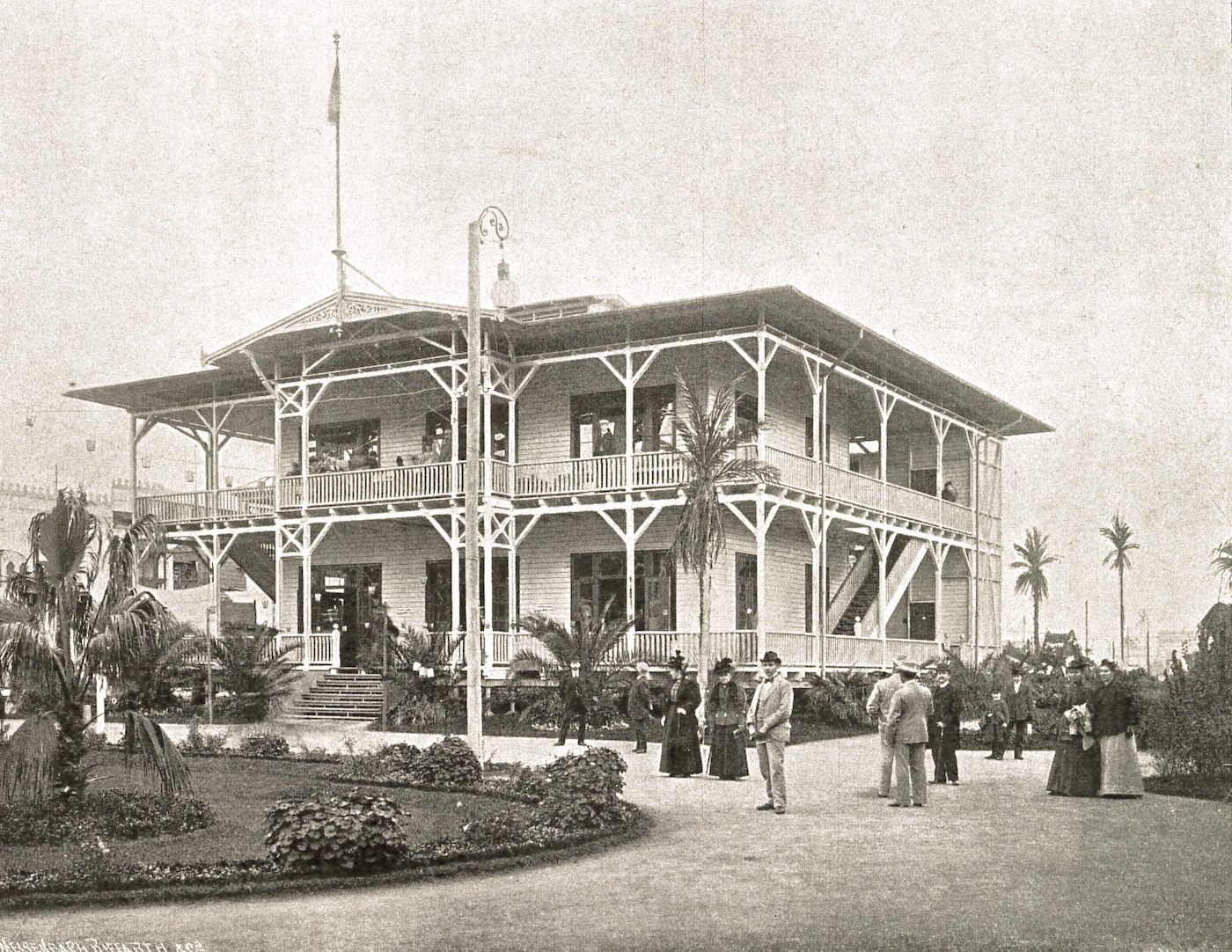 518 / 5000 Übersetzungsergebnisse This picture shows the tropical house. In contrast to the other exhibition buildings, the tropical house was not a mere dummy, but a prefabricated house that was intended as the governor's seat for Togo. The interior of the building was intended to give the exhibition visitor a “picture of the more intimate tropical life” of a colonial official. (Source: Working Committee of the German Colonial Exhibition: Germany and its Colonies in 1896. Official report on the First German Colonial Exhibition. Berlin, 1897)
4/4
4/4

Something Whispers Among The Trees

One hundred and twenty-five years after it took place, the “Colonial Village” at Berlin Treptower Park resonates through an exhibition that brings back the unheard voices of its protagonists.

In 1896, the distance between the Treptower Park and the Johannisthal City Hall (today’s Treptow-Köpenick District Museum) was covered with a timber forest. That year the trees witnessed the inauguration of the Gewerbeausstelung – a failed copy of the “universal exhibition” model that had been successful in Paris and London. The Berlin edition was not supported by Kaiser Wilhelm II, but promoted by private companies that directly profited from German colonial oppression, including Siemens, Daimler, Bahlsen, Sarotti, and Bertelsmann. As with Paris and London, the exhibition included a colonial department, the highlight of which was the infamous “Colonial Village,” where 106 men, women, and children brought from the German colonies were displayed around a water pond – the Karpfenteich – at Treptowerpark. Still on site, the Karpfenteich pond is one of the few visible traces of that cruel history whose legacy still imbues our present. Only a small banner mentions the connection between the park and Germany’s violent colonial past.

Six kilometers into the forest, the Treptow-Köpenick District Museum digs into that colonial past through the exhibition zurückGESCHAUT. Conceived in 2017, in close cooperation with Initiative Schwarze Menschen Deutschland and Berlin Postkolonial, zurückGESCHAUT is the only permanent exhibition in a Berlin museum to thematize the links between the city’s past and German colonial crimes in Africa. The exhibition is now being reworked to echo feedback received from Afro-diasporic audiences in recent years – years in which the anti-colonial discourse has continued to expand and gain more visibility. To this end, exhibition co-curator Tahir Della is working with the team on developing new tools in order to overcome the colonial gaze. Histories to reconsider include the 106 biographies of the abducted people who lived in the Colonial Village, including their lives afterwards in Berlin and elsewhere as well as their stolen belongings, which are part of ethnographic collections in Germany to this day. This summer, zurückGESCHAUT –distant and not so accessible from the Karpfenteich – will resonate through various art projects that bring into the park, back to the pond and its trees, the voices and stories of the 106 displayed people .

In 2018, audio artist Caroline Böttcher released Arbeiter, Alpen und Attrappen, an audio walk framing the 1896 Gewerbeausstellung within its social and political context. Narrated through the perspective of three white fictional characters – Julius, an exhibition supervisor; Clara, a newly arrived maid; and Hans, an experienced tour guide – the audio walk introduces the listener to that time and describes the artificial landscape constructed in Treptower Park to showcase Prussian hegemony. For Bottcher, it is important to claim a memory of the Gewerbeausstellung that renders visible the imperialist, colonialist, racist, and militaristic propaganda upon which it was founded. Through reconstructed testimonies and sounds, a different perception of and access to history is performed, a history whose traces are still visible in our urban fabric and social hierarchies. The audio walk brings us to the waters of the Karpfenteich to confront us with the Colonial Village that haunts the pond.

In 2020, departing from Bottcher’s last station, a new audio walk was released by sound artists Joel Vegel and Vincent Bababoutilabo. Entitled zurückERZÄHLT, this audio walk derived explicitly from the zurückGESCHAUT exhibition at the Treptow Museum, and focused on the testimonies of the 106 people “recruited” in the German colonies, making their stories audible and carrying them back to their original location. In the words of Vogel and Bababoutilabo: “for one summer they had to be seen by the audience in Berlin, but they also looked back attentively, fighting together against their assigned role and the injustices of the colonial state.” Vogel and Bababoutilabo are currently working on the translation of the audio walk into English and French, and on a performative tour in September 2021 through the Karpfenteich, embodying the oral narrations of “all those who have been hurt and forgotten” – all the real people who were objectified at the Völkerschau.

This picture shows the tropical house. In contrast to the other exhibition buildings, the tropical house was not a mere dummy, but a prefabricated house that was intended as the governor’s seat for Togo. The interior of the building was intended to give the exhibition visitor a “picture of the more intimate tropical life” of a colonial official. Source: Working Committee of the German Colonial Exhibition: Germany and its Colonies in 1896. Official report on the First German Colonial Exhibition. Berlin, 1897.

In October 2021, the park will also host the interventions of the resident artists of Dekoloniale In[ter]ventions, organized by “Dekoloniale, Memory Culture in the City” in cooperation with C&. Selected by a jury composed of artists Kader Attia, Lerato Shadi, Raul Walch, C& editors Julia Grosse and Yvette Mutumba, and Dekoloniale team members Nadja Ofuatey-Alazard and Anna Yeboah, the three selected artists will adapt their ideas in response to one another and integrate their work, in words of the jury, as part of a joint endeavor to expose the historical layering in Berlin’s urban space and the dominant narratives that shape our understanding of colonialism and its effects.

zurückERZÄHLT can be heard here

Pablo Santacana Lopéz (Madrid, 1991) is an independent artist and PhD researcher with the training group “Identity and Heritage,” a member of Berlin collective decolonizeM21, and co-founder of Spanish collective vendedores de Humo.

We speak to the Tunisian artist about her relationship with exhausting the material.