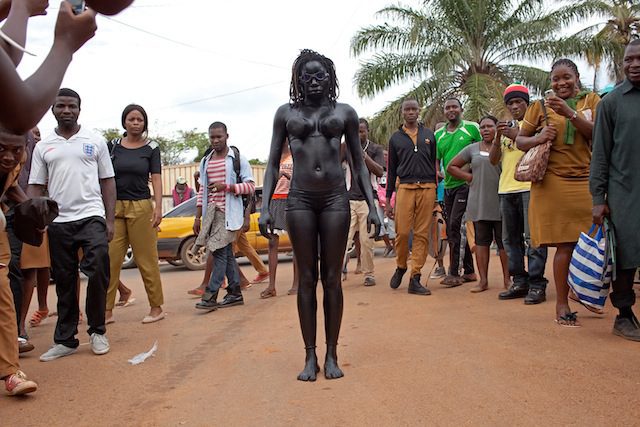 The fourth edition of the Rencontres d’Arts Visuels de Yaoundé, Cameroon (RAVY Festival) took place from April 7–13 this year. An initiative established by the artists’ organization Les Palettes du Kamer, the festival is focused largely on contemporary art practices, with a strong emphasis on performance art and public engagements. The seven days were loaded with public performances, interventions, exhibitions, and seminars at venues and sites throughout the city of Yaoundé. Founded and curated by Serge Olivier Foukou (artistic director, Cameroon), Landry Mbassi (Cameroon), and Jean Voguet (France), this edition invited Martin Baasch (Germany) as guest curator. Working within extreme financial limitations, RAVY packs a powerful punch in a public context where support for contemporary visual culture is virtually non-existent. The organizers, funders and partners work as a tight knit team and produced one of the most vital and profound art experiences I have encountered in a while.

A number of exhibitions complemented the live art aspects of the festival.  Musée la Blackitude, an important private collection of traditional African art established in 1989 by Her Majesty Queen Agnes Nana Fo Nab Ngo I and headed by the dynamic Christian Nana, housed a photographic exhibition, which included work by Chriss Aghana Nwobu (Nigeria), a series of self-portraits by Adeola Olagunju (Nigeria), and poetic musings on his father’s passing by Sentury Yob, amongst others. These notable contributions brought to the fore the performativity of activism, identity, and mourning, respectively.

The interventions staged in public spaces were highly charged, intense and exhilarating affairs, and in all cases required extraordinary stamina and bravery from the artists and the organizers. Public space in Yaounde is contested and congested, bustling with energy, simultaneously heavily controlled (read policed) and chaotic. The first series of performances took place on Avenue Kennedy, a center of transport and informal trading in the downtown business district. Veteran sculptor Dieudonné Fokou (Cameroon) kicked off the proceedings by stalling a taxi in the middle of the road, blocking traffic, offloading a series of sculptures from the vehicle, and arranging them on the sidewalk in front of a large bank. The action raised the ire of local informal traders and police guarding the bank, regardless of the letters of permission presented by the organizers. As this escalated, Valentine Torrens (Spain) started an action, comprising him kneeling on the pavement, arms outstretched crucifixion-style, with a deflated soccer ball on his head. This simple gesture sent some of the crowd into a rage, and he was forced to seek safety in a nearby vehicle.

At the nearby Institut Francais, Irene Pascual (Spain/Germany) led a procession from outside through the institution’s foyer, telling a story based partly on Cameroonian mythology, in a work that alluded to local punitive legislation regarding homosexuality. Also installed in the foyer was an exhibition of paintings, most notably a contribution by Rostand Pokam (Cameroon). His portraits of African liberation icons, considered by many in the North to be anti-heroes and villains, were an ironic canonization given their placement within a European bastion of “culture.” Upstairs, in a delicate installation created from found objects obtained from Yaoundé’s markets, Keiko Kamma (Japan) invited audience members to join her in a traditional Japanese tea ceremony, a simple act of reciprocity of hospitality and friendship, creating a social space of engaged participation.

Christina Etongo (Cameroon), a prolific and seminal figure in the local performance art scene, presented two major works during the Festival. In the first at the Institut Francias, working with two other performers including Elyphaèl Monkééy (Cameroon), he engaged the audience in a ritualistic and measured tone, delivering a manifesto whilst dousing himself with fluids from a small bowl and handing out thick live larvae to the audience.

In keeping with the larger development and reach of RAVY, the organizers placed emphasis on the theoretical and discursive aspects of performance art practices in the region and convened a conference on the topic of “Performing the Global,” hosted by the Goethe Institut. A number of important issues were raised in relation to the conditions of production and presentation of contemporary visual arts in Cameroon and elsewhere on the continent, the unpacking of the “global” as an exclusionary concept, and conversations around the prevalence of ritualistic practices and modes of performance.

Trésor Malaya (Democratic Republic of the Congo) kicked off an evening program following the conference as dusk fell, standing half-naked outside the compound of the Goethe Institut in the middle of a busy street, slowly moving up and down, bits of animal flesh and intestines strapped to his body. Lit up by passing cars’ headlights, the surreal image was exacerbated by the artist pulling small national flags out of his underpants and tossing them at passing traffic. Moving into the compound he created a large, visceral abstract painting, the marks produced by the animal blood rinsed off him by audience members.

Christian Etongo and Julie Djikey (Democratic Republic of the Congo) simultaneously presented their performance at a major intersection at Carrefour Lycée Bilingue-Essos, which engaged the public’s senses in almost all of its totality through challenging and hair-raising actions. Djikey, her body covered in thick black oil and virtually naked bar a tin-can bikini top and tight shorts, started a procession down the road clutching a car steering wheel and created huge excitement within the crowd. The work functioned as a comment on the fallout created by the extraction of oil or “black gold” on the continent and the ensuing conflicts. Pre-performance tensions were high, as there were concerns around the reception of Djikey’s near-nakedness. However, the growing crowd moved with the spectacle, cheering as the procession continued down the road.

Etongo, in a work that engaged with the problematics of vigilantism, positioned himself in the middle of the intersection, surrounded by large stones and wearing a car tire around his neck. As motorbikes and taxis whizzed by, Etongo’s motions became more and more frenetic as he rolled and tossed himself around on the red dirt, a couple of times placing himself close to danger with passing traffic. Completely unexpectedly, a second performer, Elyphaèl Monkééy, otherworldly dressed and covered in rags, arrived on stilts from a distance, pelting the crowd with clods of soft soil and scattering terrified spectators.

Given the close engagements between visiting and local artists, curators, organizers, and partners, the proximity and intimacy that led to the development of a close-knit group was truly memorable. The artists who comprise the RAVY organizational and curatorial team are exceptional individuals, working against many odds. However, they have developed an organizational and artistic model that is finely tuned and responsive to local conditions whilst being unapologetically engaged with contemporary visual arts practices. The collaborative, entrepreneurial spirit of the team combined with their brave tackling of bureaucratic and public hurdles bodes well for the future of RAVY.