Isabelle N’diaye on the biennial that aims to create the conditions to forge realms out of fire and in action.

This creative review of Dak’Art is situated in the eyes and experience of a woman, those of a diasporic Black body who grown up partly in Dakar and partly in Western cities, who is sensitive to urban design and urban governance and more precisely sensitive to how arts (un)shape cities both politically and spatially. 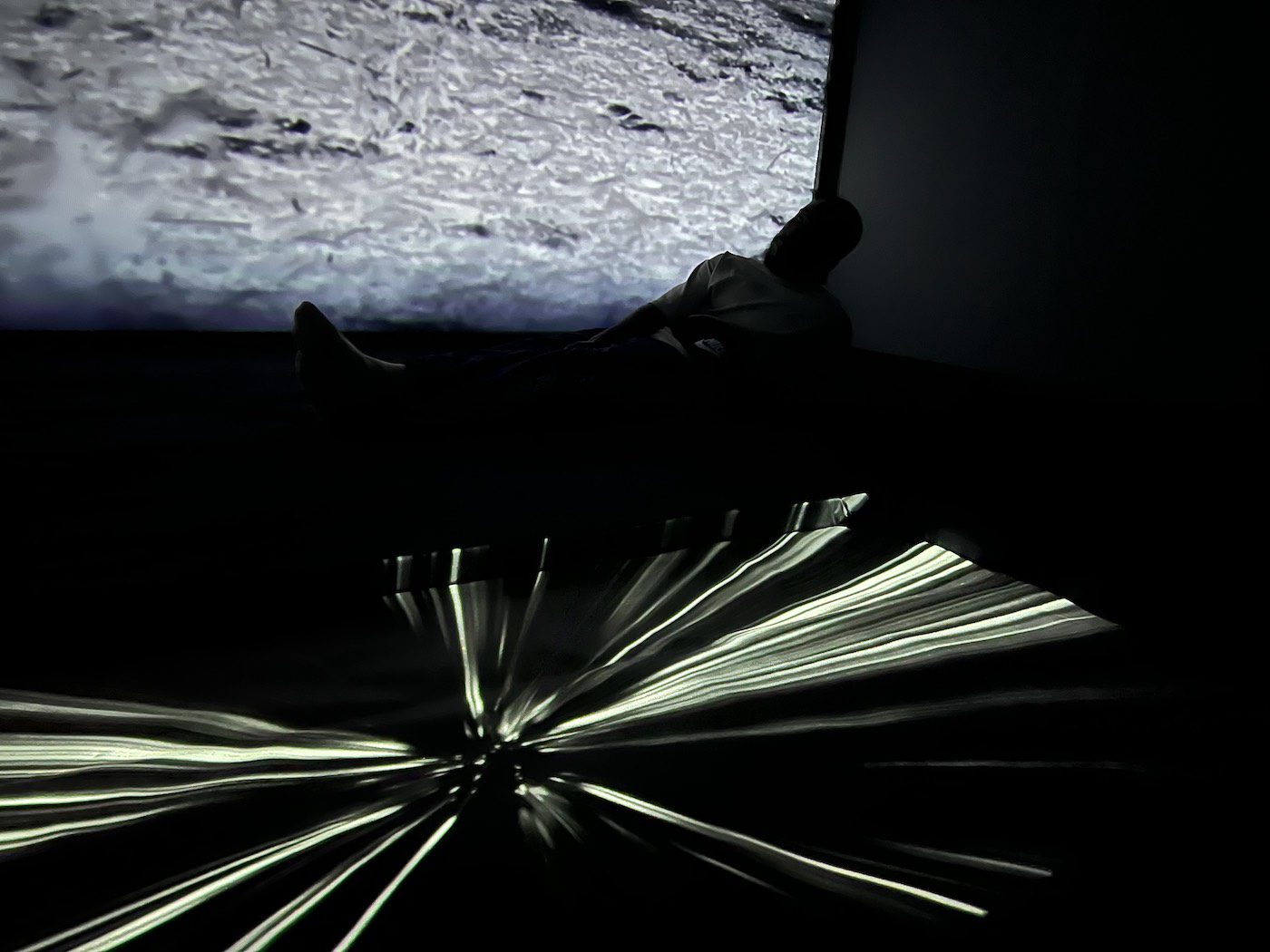 As explained during the fourth Les ateliers de la Pensee coordinated by Felwine Sarr, the main purpose of Dak’Art 2022 is to create the conditions for forging, to create realms out of the fire, to be in action. Serer speakers might employ the term ĨNDAFFA, and best understand the core theme: it is “drawn from I NDAFFAX which – in Serer language – invites to the forge. By posing its spelling as a dual action of naming and confusing the meaning, the term expresses the freedom to transform as well as the multiple possibilities to create.” ĨNDAFFA#, forging after the COVID-19 era, thus suggests the alchemy of the transformative action that leads to a new stage.

Navigating this biennial as both an insider and outsider, interacting with artists while enjoying the massive arts proposals throughout the city like any visitor, I understood how seriously this notion of ĨNDAFFA# has been taken by the overall arts ecosystem. Everyone, those involved in the official public programming (IN), those proposing something on its margins (OFF), and those circulating between IN and OFF spaces, have been busy forging conceptual and artistic spaces to shape forms and conditions towards the post-colony. 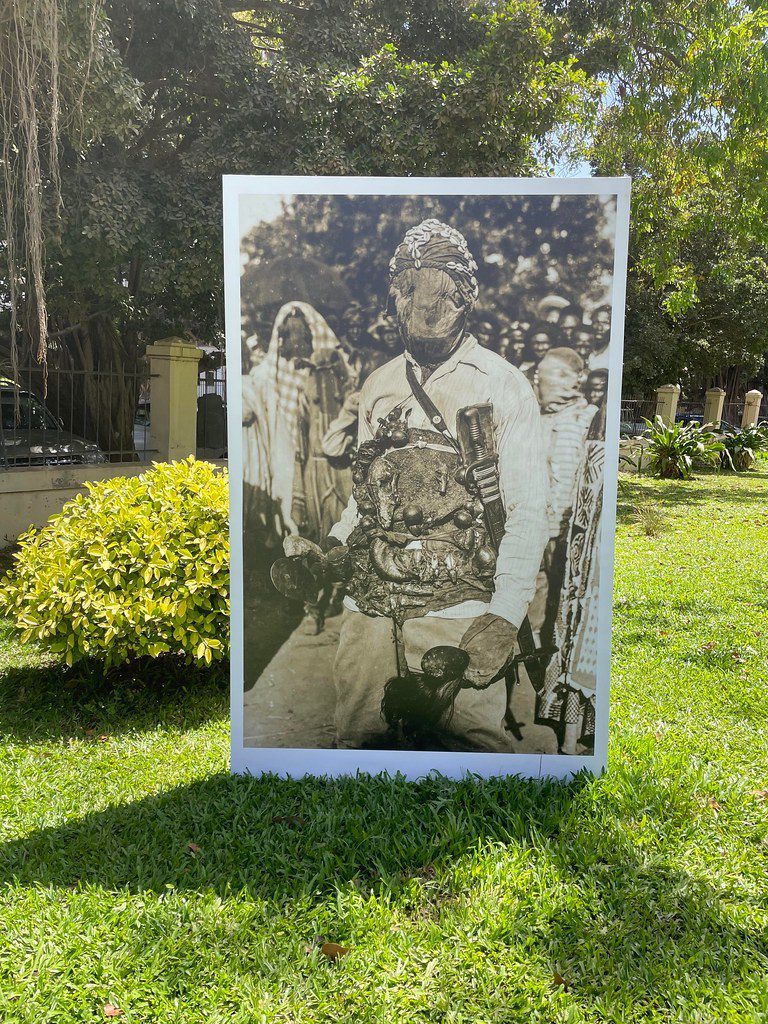 One node to frame arts production in the Dak’Art 2022 context is the act of relating to objects from the past which can be re-enacted in the present, depending on the value and consideration we allow them. The exhibition Teg Bët Gëstu Gi, which could be understood as a poetic Wolof way to say “learnings,” is eager to undertake this conversation. El Hadj Malick N’diaye, curator of the museum and artistic director of Dak’Art, and Emmanuelle Chérelle invited five international artists to navigate the museum’s commodified artifacts. Our Maamo Mame (ancestors of the ancestors), as named in the title of a film by Mamadou Khouma Gueye, were excavated and re-animated: knowledge, songs, enunciation of practices, real, lived, crossed, or forgotten stories, give voice to these artifacts, languages, and local narratives. 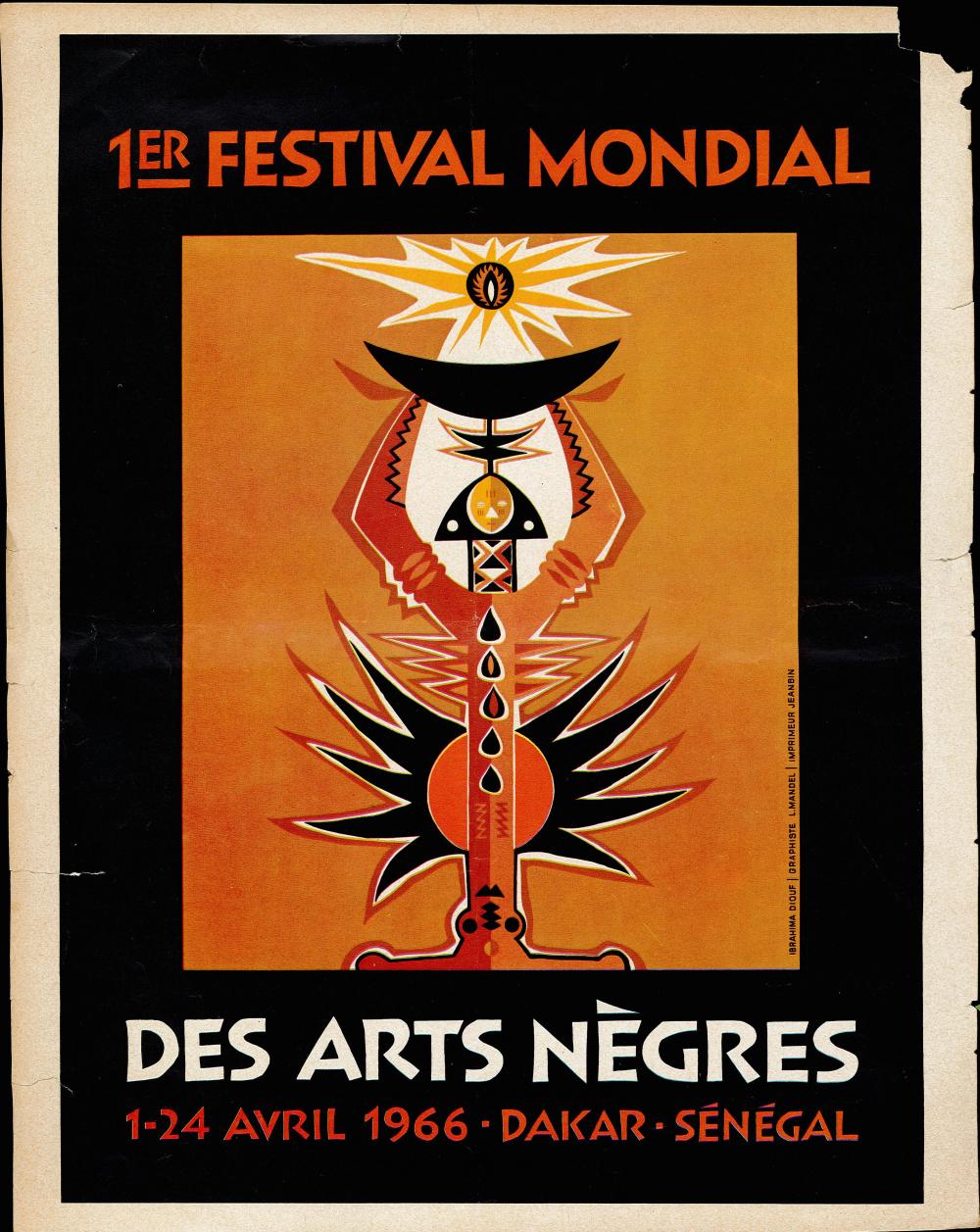 The epicenter of Dak’Art, the former courthouse, has experienced several lives. At first it was a place of justice where various presidents and/or presumed coup d’état suspects were tried, but then it fell into disrepair. After twenty-four years of neglect and at least as many years of intense lobbying by the arts sector, since 2016 this building has officially been used for cultural purposes after its public reallocation by the chief of state.

Another building resonating with stories is the current Supreme Court of Dakar. It was initially built as a Dynamic Museum, a key point of the 1966 First World Festival of Black Arts and dedicated to designing African ways of arts production and proposing an approach to museums as sites of happenings rather than sites of static exhibitions. Alongside the IMF Structural Adjustment Plans, the late 1980s and the 1990s marked dark years for this cultural space. On presidential order, in 1988 every arts user had to vacate the place, helped by police forces. Artworks that were not able to leave with their authors thus became public patrimony under the care of the new inhabitant, the Supreme Court.

In a gesture of political accountability possibly nurtured by current debates on restoration and restitution, a generous process of restoring these oeuvres has been jointly undertaken by Dak’Art and the Supreme Court. Meanwhile an exhibition presenting traces of those legacies will open at this very Supreme Court as part of the OFF programming.

The rehabilitation of the former courthouse as well as the restoration of the artworks are two approaches produced in the context of Senegal, concerning Senegalese spaces and productions that feed the debates on restitution. Being able to restore one’s places and give value back to the national heritage are sine qua non conditions for the good continuation of the restitution processes that are beginning in the global world.

Forging our streets and forging an organic archive for the future

As a city of arts and culture, Dakar is not immunized against white box syndrome.

During this biennial, the heavy arts presence within the streets not only of the city but of the overall country (throughout the OFF programs) becomes a challenge. Doxantu is a public space program for this year’s biennial. People can experience several hors format exhibitions and specific performative arts moments.

The Collective Villes en Mouvement with Ker Thiossane and Alt-Del Geej Mambulaan organized a performative arts proposal reflecting on ecology in an open conversation with the streets. Another performative proposition was made by Precy Numbi, visual artist based in Brussels that started developing eco futuristic robot performances in Kinshasa. Precy Numbi and his alter ego, Robot Kimbalambala invited some of his diasporic friends from Kigali and Abidjan to share a doxantu (Wolof for “stroll”), wandering in between eco-futurism, ritual celebration, and human non-human encounters in between the Atlantic Ocean and huge industrial sites, soon-to-be luxurious flats. 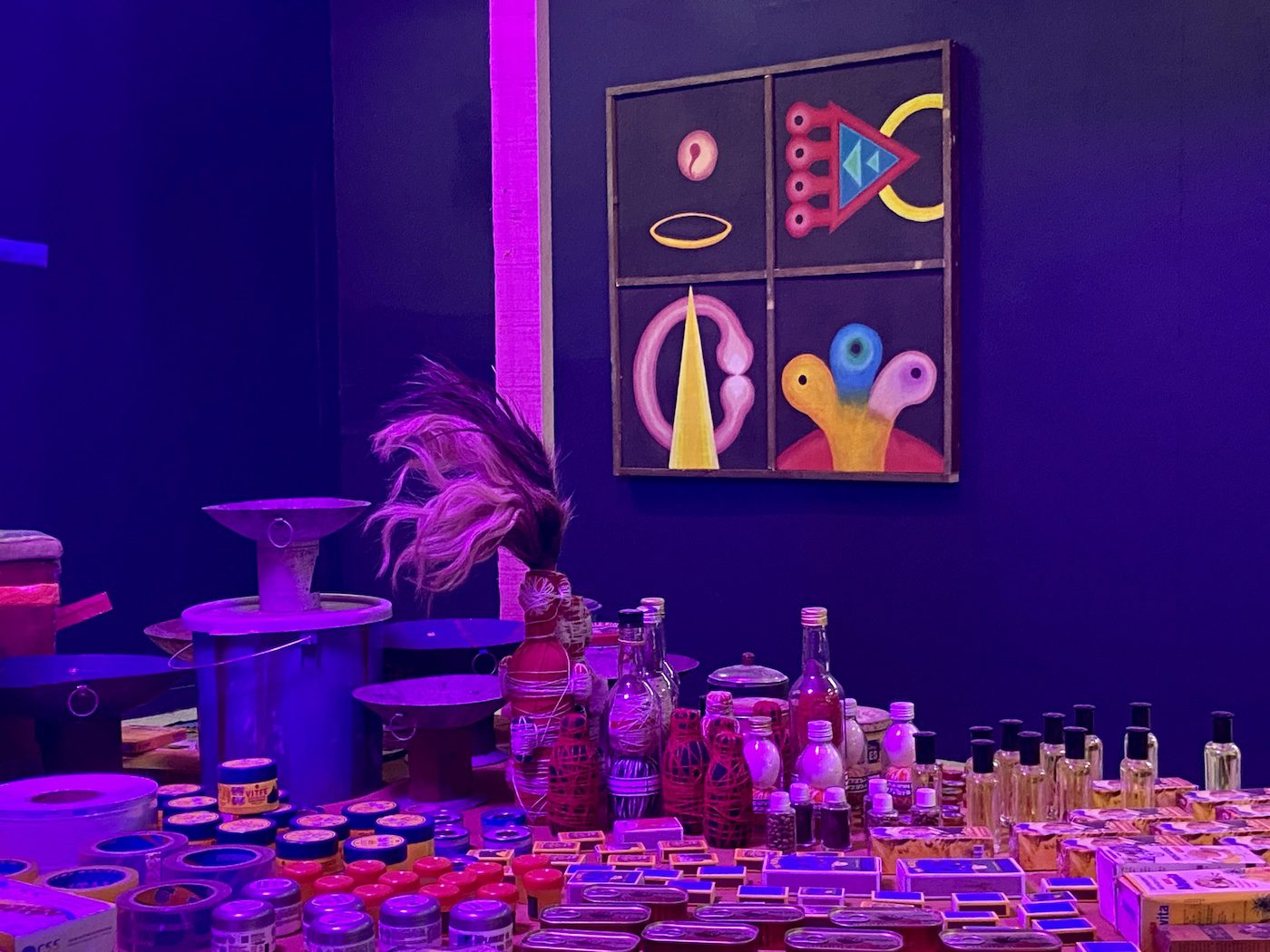 The School of Mutants, an in-depth artistic research project led by Hamedine Kane and Stéphane Verlet Bottero, navigated the crossroads of the museum and its counterspaces to propose an installation at IFAN Arts Museum. As a school without teachers, walls and hierarchies between knowledge, the collective reinvested the scenography of  A Case Peulh. This traditional housing style is specific to north senegal Halpulaar communities, prone to consider daily herbs and furniture as wonderful materials to heal, reconnect and communicate amongst various entities. By a balance in between museum materials archives and an artistic translation of Halpulaar endogenous knowledge and savoir-faire, The School of Mutants constituted as a recollection, a reanimation of narratives that fell into oblivion as soon as the museum commodified its essence. 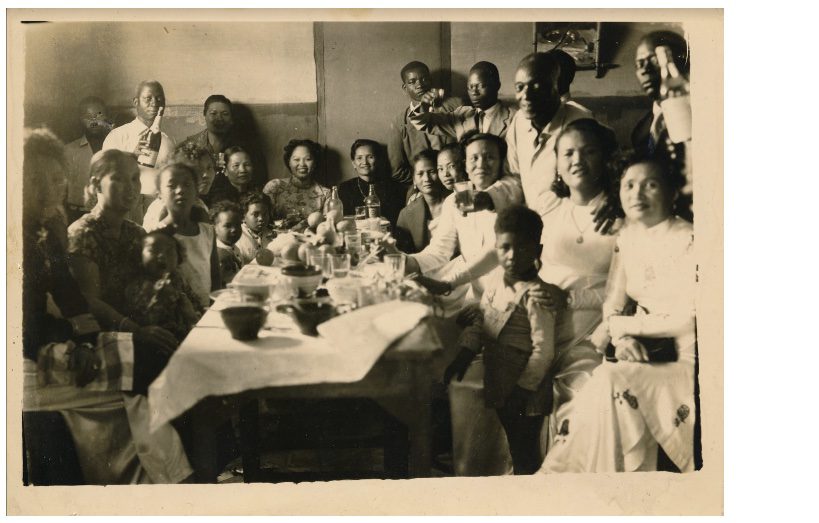 The Raw Material Company, a center for arts, knowledge and society that hosted the intermediary research phase of the School of Mutants, is also opening a discursive space to rebound with stories that have been canceled in the official (meaning: colonial) narrative, but that need to be told.

The Specter of Ancestors Becoming is an exhibition proposed by Tuan Andrew Nguyen involving Vietnamese-Senegalese community, bringing out of the shadows and shedding light on the stories of this community’s strong female figures – mothers and pillars of families that are an integral part of the Senegalese social fabric.

Breaking down boundaries and hierarchies that exist in between artifacts, digging deep into the epistemologies producing knowledge towards the postcolony, towards a way of doing something else other than what has been learnt seemed to constitute the overall grammar during Dak’Art 2022.

Isabelle N’diaye is a cultural journalist living between Brussels and Dakar. She provides analyses of arts production and knowledge circulation within a postcolonial frame, allowing subversive forms to emerge and unheard voices to be heard. www.1312.space