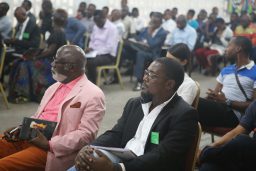 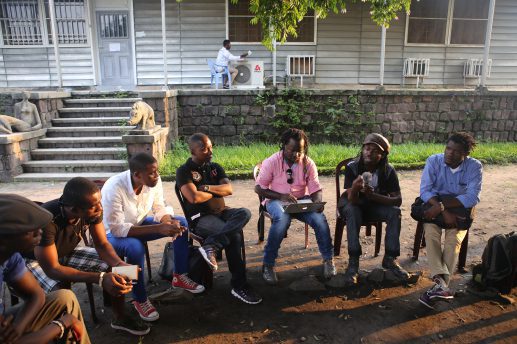 Framing the Imagined, and Performing the Real

Arts practitioners, educators and academics gathered in Kinshasa earlier this year to discuss the way forward for arts education in the Global South

Between 18 and 21 January 2016, the Democratic Republic of Congo’s capital, Kinshasa, was the meeting place for researchers and artists, art students and teachers, policy makers and cultural producers, museum experts and exhibition makers to think about new paths in arts education. The symposium Mediating Past, Present and Future: Dialogues with Global South experiences, an academically driven transdisciplinary gathering collectively organized by art schools of the global south, was organized as a workshop. The presentations alternated with focus group sessions, and the whole program was interspersed with visits to artist’s studios, cultural places in town and an evening of video art. This formula for discussion turned this academic event into an encounter, or to put it in the words of André Lye Yoka, des retrouvailles: an event of reunions.

Unfortunately, keynote speaker Achille Mbembe was unable to attend, but Lye Yoka’s powerful speech was a good match for Mbembe’s habitually provocative discourse on postcolonial issues. When it comes to discussing the question of the future of arts education, the challenge, according to Yoka, lies in the interrogation of the colonial and postcolonial aesthetic and epistemological models and in the strength of collaborations between the art institutions on a local and pan-African level, as well as with “natural allies” in the south, such as Brazil. Recalling Mbembe’s concept of “ayants-droit,” the questions have to be repositioned towards the “custodians” of culture and art practice. For Yoka, it is important to develop a cultural policy that situates itself firmly in relation to North-South power relations, and he evoked the example of the restitution of human remains, which is symbolically and morally important, back to the territories from where they were taken as a result of colonial violence.

The main focus of the combined colloquium-workshop, the relationship between historical narratives and artistic creation on the one hand, and south–south dialogues in art education on the other, was the basis for the performance and photography workshops mediated by South African artists Donna Kukama and Natasha Christopher and the Brazilian artist Ayrson Heráclito. Fourteen students from the ABA participated in these workshops, and their exhibition “Framing the Imagined” and “Performing the Real” demonstrated that the issues addressed in the symposium were also of concern in the individual artist’s projects.

The reunions on the local, Congolese level opened up perspectives for partnerships between cultural institutions such as the ABA and INA as well as with other arts schools such as the Institut Supérieur des Arts et Métiers and the Institut Supérieur de l’Architecture et d’Urbanisme. There are also promising collaborations with the Institut des Musées Nationaux du Congo, especially around the new construction of the National Museum and the development of the Musée d’art contemporain et des multimédias housed in the iconic Echangeur tower in Kinshasa’s popular neighborhood of Limete.

Rediscoveries were also a theme for the protagonists of the public debate from the late 1990s and early 2000s with the division between academicism, which was linked to more traditional art production and the art education of the Académie de Beaux-Arts, and “librisme” (“freeism”), the movement to break away from the classic canons of the academy. The colloquium brought the librists, or at least some of them, back into the walls of the Academy for a real dialogue, probably for the first time. This led to fierce but healing discussions that explored fresh approaches to art education within the Academy.

The focus group discussions handled themes ranging from “education/pedagogy from the south,” to “the decolonization of the art institution,” and from “artworks as history,” to “framing time and history,” “comparative methodologies,” and “imaging violence.” However, some topics recurred strikingly often, such as the role of avant-gardism or the frequent differences in local and international appreciation of art projects about versus from the Congo. Congolese initiatives, avant-garde movements and art historians seem to have difficulty achieving international recognition. On the other hand, initiatives promoted from outside triumph every time. In some cases the key probably lies in the frustrating feeling that such initiatives, for different reasons, are generating international appreciation because of “primitivist exoticism” and what is seen as “unbridled eccentricity.”

At the time of writing (March 2016), Patrick Missassi, director of the Kinshasa Academy, who initiated the partnerships with Brazil and South Africa, has been succeeded by Henri Kalama, who was remarkably present during the symposium. It is expected and hoped that he will continue promoting the collaborations and reforms initiated by Misasi. Another hope is that the partnership with Brazil and South Africa, with the latter country going through a much needed “crisis” in higher education triggered by the Rhodes Must Fall movement, will help to inspire a profound process of decolonization both of knowledge and of the institution.

Sari Middernacht is museologist and exhibition producer. She studied African Languages and Cultures at the University of Ghent and at the Istituto Orientale in Naples, Italy. From 2003 until 2013, she worked at the Royal Museum for Central Africa (Tervuren, Belgium) while freelancing on contemporary African art and literature projects. Currently living between Lubumbashi and Johannesburg, she works on art projects, research and exchanges between both cities.