Football is more than a game. Various contemporary artists have fiercely explored the dark sides of this global passion. Curator and author Aldeide Delgado takes a deeper look into the topic.

These days, as the FIFA World Cup 2018 is being held in Russia, the Pérez Art Museum Miami (PAMM) presents the exhibition The World´s Game: Fútbol and Contemporary Art, which draws attention to one of the common language with the highest international appeal.

“The topic of football has been approached universally by contemporary artist for a long time”, Franklin Sirmans maintains, director of PAMM and curator of the show. “A lot of them engage in the game as a way establishing common ground between people from all over the world.”

The World´s Game: Fútbol and Contemporary Art explores the relation between art and football departing from the question/interrogation: How do artists reflect on the implications of football in society?

Some of the artists included in the exhibition are Miguel Calderón, Lyndon Barrois Jr., Stephen Dean, Kehinde Wiley, Vik Muniz, Antoni Muntadas, Wendy White, Andy Warhol and Espoir Kennedy, all of whose works focus on the phenomenon of fans and media idols. For example, the 90-minute video by Miguel Calderón which opens the exhibition, Mexico vs. Brazil (2004), transmits an imaginary game in which Mexico defeats Brazil by 17 to 0. Composed as a collection of match scenes between the two countries, Calderón highlights the moment of the goal, as the “most extravagant fan fantasy”. The video installation by Stephen Dean, Volta (2002-2003), continues this proposal, documenting the colorful visual landscape generated by a huge flag held by spectators in the stadium. Meanwhile, the portrait by Kehinde Wiley represents Cameroonian striker Samuel Eto’o, who holds a record in being awarded the African Player of the Year trophy four consecutive times. 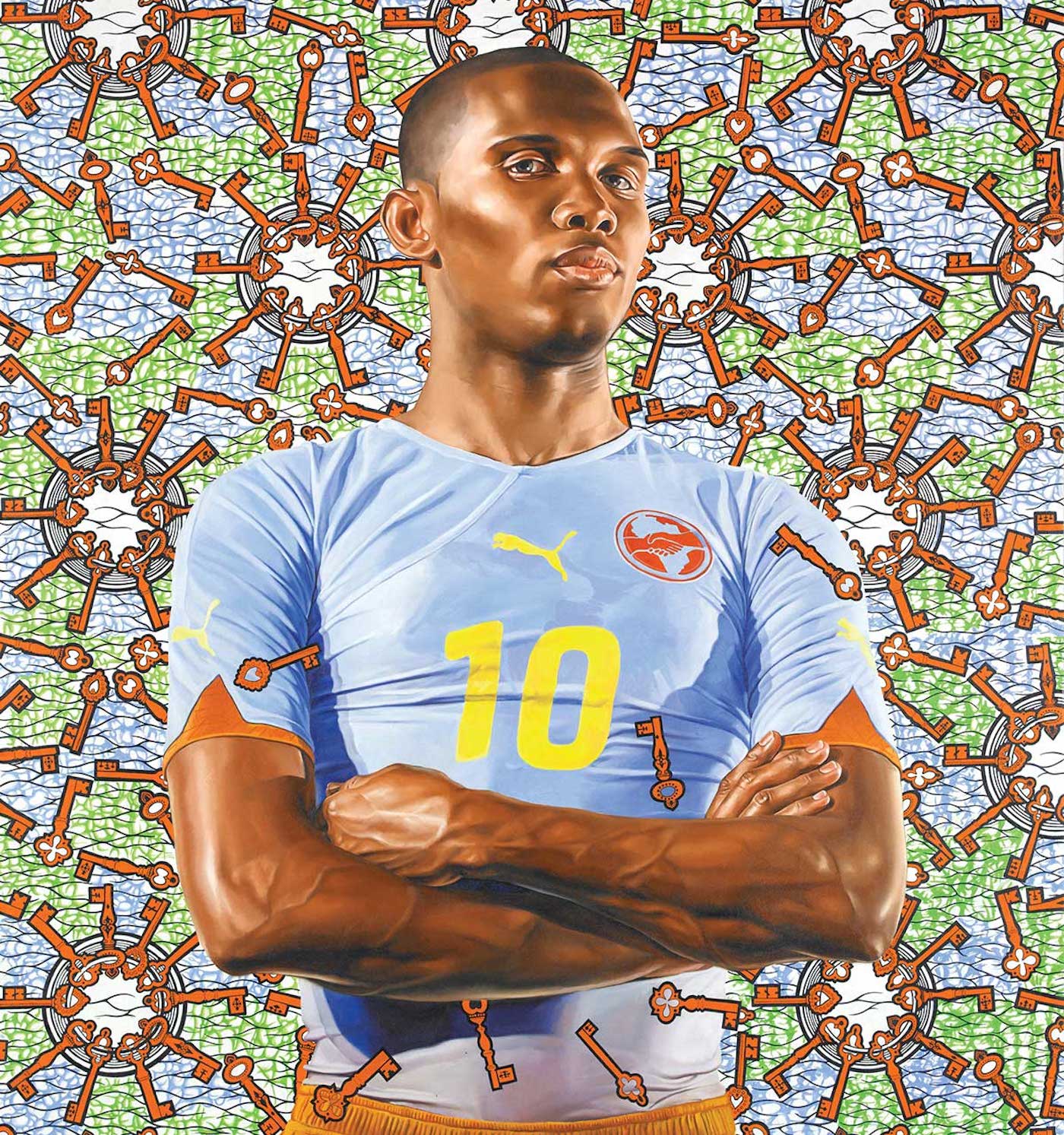 Taryn Simon exhibits a large scale photograph centered around the floral arrangement that decorated the FIFA negotiating table when the organisation decided to prohibit third-party ownership of the financial rights of football players. References to politics is also noted in the works of Gustavo Artigas, Lyle Ashton Harris, Jamilah Sabur, Jaime Luriano, Melanie Smith and Rafael Ortega, Penny Siopis, and Paulo Nazareth. In the case of the latter, his serigraphies of the series Products of Genocide (2015-2016), show logos for football teams that bear the name of near-extinct indigenous tribes such as Guaraní and Tupí.

The video by Jaime Lauriano, Sudden Death (2014) examines the legacies of violence during the Brazilian military dictatorship (1964-1985) through the contrast between faces covered by the Brazilian victory shirt from the 1970 World Cup and a voice in off reciting the names of the dissidents disappeared or murdered during the same year.

Satch Hoyt tackles cultural narratives related to the African diaspora. In particular, the piece Kick That (2006), a soccer ball resting on a stand made out of bronze bananas, refers to bananas thrown at black players by their European opponents. Another perspective is offered by Adler Guerrier, for whom soccer represents a great opportunity for the union of the African and Caribbean diaspora beyond national borders.

Aldeide Delgado is an independent historian and curator. She has been awarded with the Investigative Grant and Production of Critic Essay 2017 issued by Teor/ethics. Her interests include gender, racial identity, photography and abstraction in the visual arts. She has been a speaker at the California Institute of Arts, the Spanish Cultural Center Miami, the University of Havana, Casa de las Américas, the National Library of Cuba and the 12th Havana Biennial. Se studied art history at the University of Havana (2011-2016). Her articles have been published in Art OnCuba, Cuban Art News, Arte Al Límite and Artishock. She is a current collaborator of Artishock in Miami.