"Biafra of Spirit" in Prague

In the 1960s Czechoslovakia’s aspiration to a “socialism with a human face” and its accompanying cultural politics allowed for several African, Asian, and Latin American students to explore the world through film in Prague. A recent exhibition in the city and a subsequent publication documented this truly international momentum while dissecting the aspirations and limitations of a state, itself in high political crisis, trying to define its own communist agenda against an overpowering Soviet Union.

Demonstration against the murder of Patrice Lumumba, Prague1961. Archive of Piyasiri Gunaratna

A black and white photograph depicts a large crowd diverse in age, ethnicity and gender. Members of the crowd hold protest banners, flags, and posters. Many have their fists up in the air. A man in the center of the crowd fires up the masses, his raised right arm guiding our gaze towards the central poster, which features a photograph of Patrice Lumumba. This solidarity protest against the brutal murder of the Congolese leader took place in Prague’s Old Town in early 1961. The man at the center of the photo is Sri Lankan Piyasiri Gunaratna, then a young film student at FAMU, the Film and TV School of the Academy of Performing Arts in Prague. 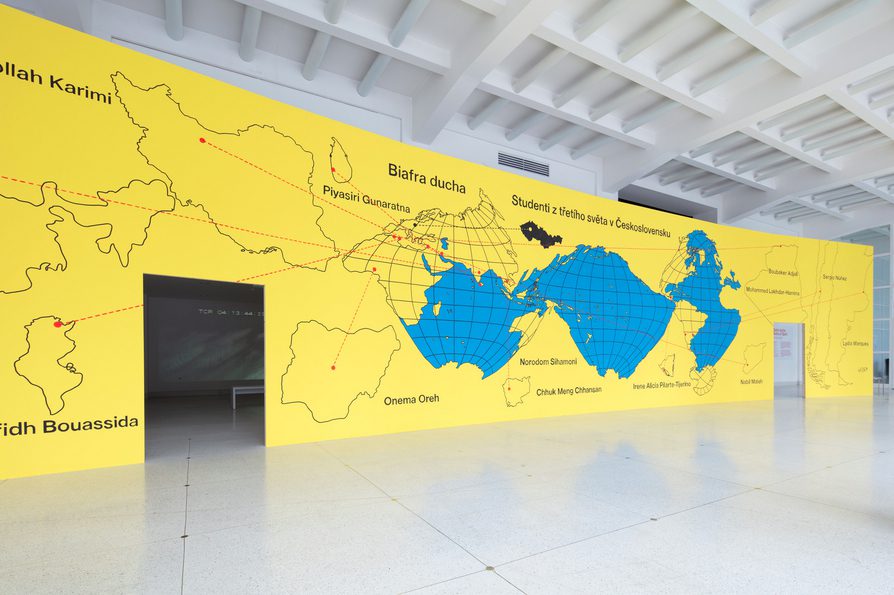 This photograph is just one of many fascinating finds in the research exhibition Biafra of Spirit. Third World Students in Czechoslovakia, which was on view at the National Gallery Prague’s Trade Fair Palace last year. Assembled by curator Tereza Stejskalová in collaboration with the artist Zbyněk Baladrán, it zooms in on the medium of film and film education during a period of intensified relations stemming from official politics of high internationalism with global ambitions in the Eastern Bloc. In its research approach, the show proposed a rich cultural landscape of reciprocal influence: films by international students and their fellow Czech students about the impact of decolonial processes on the artistic production of the Czechoslovak New Wave cinema, as well as cinema history in the countries of origin of the visiting students.

The show was presented in two screening rooms, each with multiple projections, and continued its display of films and archival material on a large tilted wooden arc. The front exhibited the unfamiliar view of an off-center world map with arrows tracing the movements of people, professional connections, and other lines of information, influence, and affection. A wealth of archival material was spread across the back of the wooden construction to form a tableau of the era using different media and artifacts. Organized around three interconnected chapters – the case of the University of 17th November, Czechoslovak Culture and the Decolonization Movement, and finally, Racism and Socialism – the show examined the legacy of a state-imposed solidarity and the foreign affairs support program of newly post-colonial and not yet aligned countries. 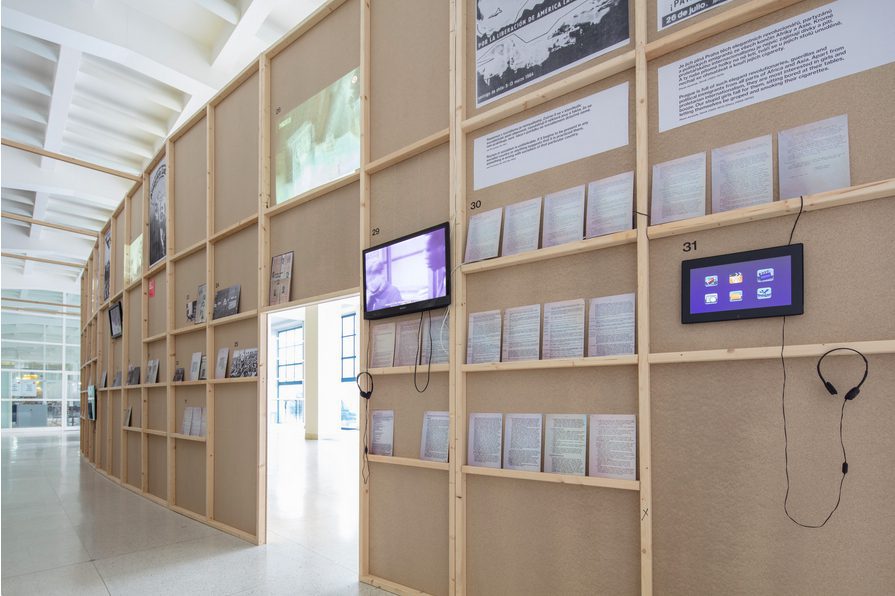 There were facsimiles on view of the international student newspaper Forum as well as other documents from the archives of the University of 17th November, the college pooling all foreign students. One account referred to a student celebration of Czechoslovakia’s declaration of independence in 1968 when students from Biafra were performing a symbolic “dance of feathers,” a traditional war ritual during which they adorned the portrait of Alexander Dubček with feathers, conjuring up a victory for the politician’s attempt to reform the country’s communist party. His brave act eventually ended in the Soviet invasion of the country. The phrase “Biafra of Spirit” stems from writer Louis Aragon, who in Les Lettres Francaises in October 1968 described the relentless suppression of the Prague Spring and its intellectual base by the Soviet Union. Aragon related this key period in the history of reformist communist thought to the West-African secessionist state, which was fighting for independence from Nigeria between 1967 and 1970. This thinking together of independence aspirations, surpassing cultural, geographical and political differences, indeed encapsulated the essence of the show and could be traced along different works, as well as the individual persuasions of their authors.

Another featured photograph depicted a group of students around Algerian Mohammed Lakhdar-Hamina, who was sent to Prague’s film school FAMU in 1959 by the National Liberation Front, which strove for the independence of the North African country. He returned to Algeria to become the first Arab director to win the Golden Palm in Cannes for his film Chronique des années de braise (1975). Onuma O. Oreh’s article mapping the beginnings of cinema in Nigeria can be read in a facsimile of a 1975 issue of the magazine Film a doba. Oreh studied at FAMU between 1965 and 1970 before returning to Nigeria to be a film critic, professor, and expert on cinema in West Africa. The shorts Extras (1993) and The Road to Damascus (2005) by Nabil Maleh also featured prominently in the show. After completing his studies in Prague, Maleh went on to become the “father” of Syrian cinematography. From Sri Lankan Piyasiri Gunaratna’s film Winter in Czechoslovakia (1964) to the current king of Cambodia, Norodom Sihamoni, who already attended high school in Czechoslovakia before moving on to higher education, there were numerous other examples highlighting the impact of the international study programs.

The show was timely and especially relevant regarding Eastern Europe’s current political climate as well as nationalistic tendencies in the world at large. It uncovered a forgotten memory without nostalgia, as it rooted this memory in the present through several contemporary interviews and filmic reflections on the stories of the filmmakers, produced by curators Stejskalová and Baladrán themselves. Through the historic film material it effortlessly emphasized that the present and future have always been uncertain and full of doubt and contradiction, not a retrospectively idealized paradise. But the show also actualized the seemingly unsolvable rivalry and commensurateness of questions of intersectionality and identity on one hand, and on the other, the aspiration for the formation of a sort of international and transcending comradeship. 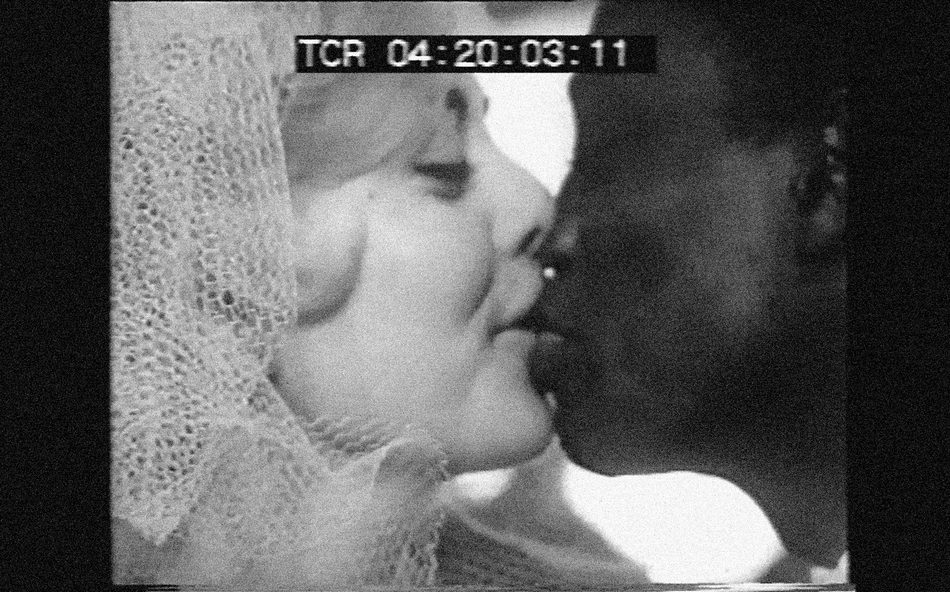 Still from Black and White by Krishma Viswanath, 1968.

The short film Black and White (1968) by Mumbai native Krishna Viswanath explores the reactions of the Czechoslovak people to the cultural presence of foreigners in a country that was left ethnically and culturally homogeneous after the Second World War. A reality that stands in stark contrast to the internationalist and universalist ambitions of the communist project. While interrogating cultural differences, the film – made by an Indian, starring African and Czechoslovak students as well as ordinary Czechoslovak people – becomes a mediation oscillating between the individual and the collective, universal ambitions and particular experience. The film begins with a rather insulting quiz between a young Czechoslovak girl and an African student, but then the girl opens her final introductory monologue with the words, “You are black. What is your name?” moving from a racialized generalization to a personal enquiry. The black and white film continues to follow two young mixed couples – Czechoslovak women, African men – as they confront their families as well as society, debunking the socialist ideal of modernity and progressiveness, asking questions that had not been asked before because racism never officially existed during communism.

Biafra of Spirit managed to connect this unresolved discourse of lived experience in Eastern Europe to today, when in most post-socialist societies xenophobic sentiments have been normalized and manifest themselves openly, and are sanctioned by real political powers. The exhibition and its publication Filmmakers of the World, Unite! Forgotten Internationalism, Czechoslovak Film and the Third World mine the rich archival legacy of this era to present these lost socialist utopias with all their flaws and real world constraints. It is not the first project of this kind. Saving Bruce Lee: African and Arab Cinema in the Era of Soviet Cultural Diplomacy was a 2015 exhibition and screening program at Moscow’s Garage Museum, curated by Koyo Kouoh and Rasha Salti, in collaboration with Alexander Markov and Phillippe Rekacewic. Nonetheless, Biafra of Spirit took a different approach to the material, as the 1960s in Czechoslovakia were marked by a “socialism with a human face,” a spirit which also transpired to film education, leading to the film productions by the international students as well as to Czechoslovak New Wave.

Through the materials and the many filmic examples, Biafra of Spirit articulated a politically highly complex era, revealing its contradicting aspirations and limitations on individual levels, proposing a relevant link to our current numbness in light of returning ghosts. Still, the show insists on hope through emphasizing the poetry – visually and in narrative – that the presented films carry.

Biafra of Spirit. Third World Students in Czechoslovakia was on view from 19 October 2017 – 7 January 2018 in the National Gallery Prague, Czech Republic.

Kathleen Reinhardt is the curator of contemporary art at Albertinum Dresden, where she recently organized Marlene Dumas. Skulls. She holds a PhD from the “Arts of Africa” department at Freie Universität Berlin.