How Abstraction is Another Word for Freedom

Our author Gauthier Lesturgie met up with artist Adam Pendleton to talk about his show shot him in the face, currently on view at KW Institute for Contemporary Art in Berlin

Gauthier Lesturgie: You have used two quotations from the poem “Albany” by Ron Silliman as the starting point as well as the title of your exhibition: “If the function of writing is to ‘express the world’” and “shot him in the face”. Ron Silliman theorized his writing system in his essay “The New Sentence” (1987), which proposes a collage-like prose made of juxtaposed short sentences. I think this method of montage is very similar to your way of creating: your language is made of ellipsis, dislocations and parataxis. Can you tell us more about your interest in Ron Silliman?

Adam Pendleton: I have a general interest in theories of language, particularly in how they exist in relationship to specific poetic traditions. Ron Silliman’s idea of “The New Sentence” ends up being mobilized in my work and applied as a visual apparatus: collaging, layering sentences, but not with the drive to create a work which would be final and fixed. It seems broad and abstract but you also try to structure meanings and create new theories of logic and new narratives that disrupt a linear sense of how a narrative functions, to offer something else. There is a criticality at play in relationship to the sentence, the image, the word itself and that is what is being examined and put to work. This exhibition is bringing together ideas and bodies of work I have been working on for a very long time, reworked and repositioned in different phrases and different images.

“Albany” is part of Silliman’s larger body of work called “Ketjack” which is a kind of a lifework, an immense opus. Like so much of his writings, the sentence, even the idea of it, is tremendously generous; this simple thing, simple structure can move in so many directions at once and that’s very much what I ask for the art object itself. It is that through an economy of means we as viewers might go in many directions at once. 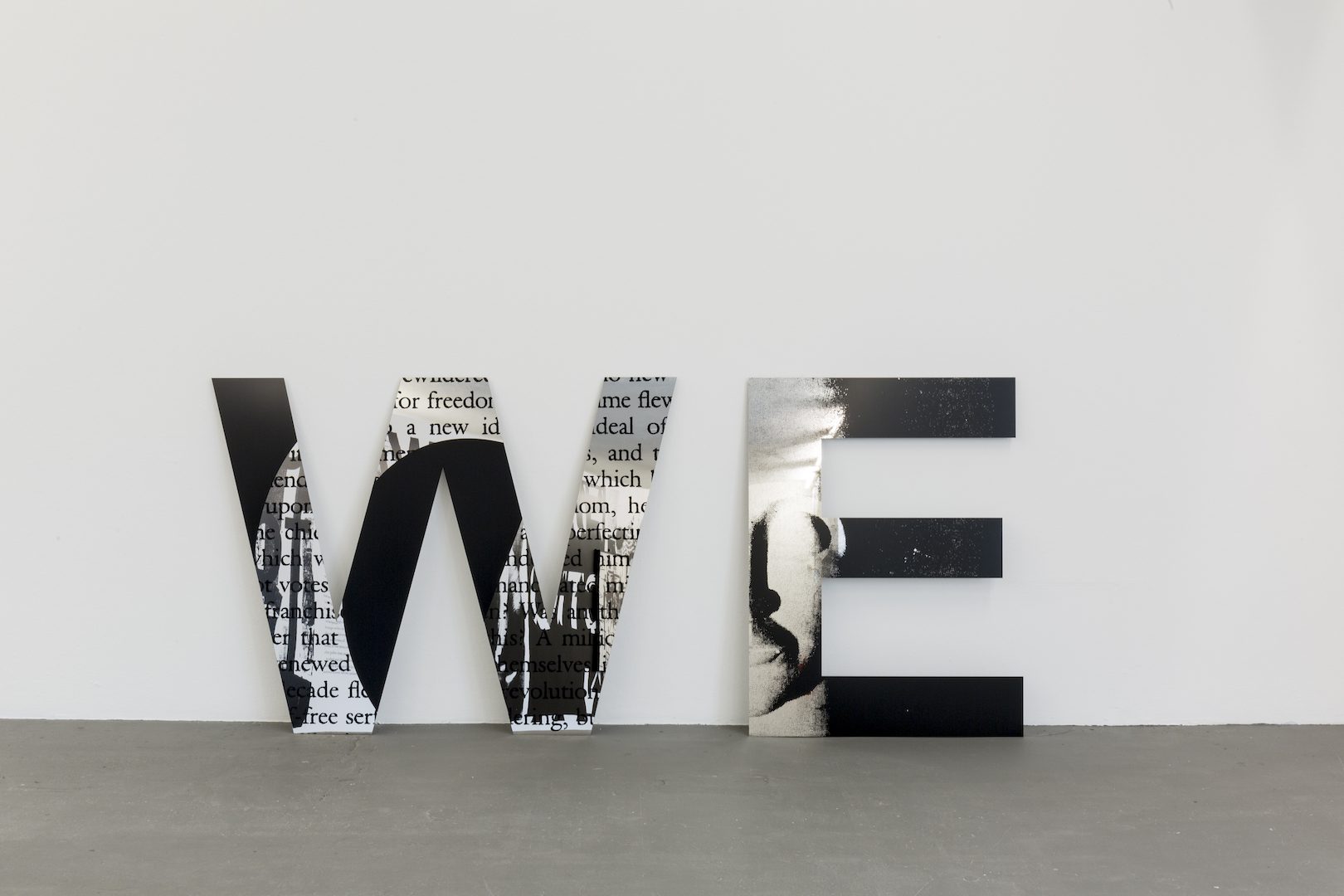 GL: “shot him in the face” is part of KW Institute for Contemporary Art’s exhibition series dedicated to the artist Ian Wilson: bringing together Wilson’s works and those of other contemporary artists as well as proposing his practice as a conceptual framework. Some connections between your work and his are quickly visible, notably the reflection and use of discursive forms. Perhaps less evident is the deep interest in abstraction you share with Ian Wilson. Can you tell us more about this interaction?

AP: Ian Wilson is a very important conceptual artist who has utilized questions about the materiality of language, and in this case the lack of it. His discussions have become his primary works that he “makes” with his audience. What is interesting is that the exhibition actually brings together two artists interested in language, and in my case language as image, image as language. We end up having a dialogue through two monochromatic paintings. His is a rectangle that is slightly off, mine is a black monochrome that perverts that space of the modernist, monochromatic black painting, like Malevich’s “Black Square”. Both methods of execution are kind of perverting that space. It is not hand painting, it’s sort of mechanical, the screen is reproducible but still has this kind of intimacy of something that is handmade and refined because of the level of detail: what color of black, what finishes, the diptych – two things coming together to form one – and the letter “a” placed on its side which derives from the term “Black Dada”. There is a kind of process of liberation and of abstraction in relationship to painting but also in relationship to language and history and how abstraction is another word for freedom. These paintings speak to each other, that is the dialogue, that is the mechanism for exchange. I think it’s unexpected and productive.

It was very much an idea of Krist Gruijthuijsen, the curator, and I was actually convinced the entire time we were working on this exhibition that it wouldn’t work. Krist and I had developed a specific layout and plan through intensive conversations: this wall that would bisect the space and what would hang on it, the phrase, etc. I thought the actual placement of Ian Wilson’s work would disrupt things, from a formal standpoint. Then, when the painting went up, this red monochrome slightly off rectangle, it became a kind of a filter for my own painting. For me, the “Black Dada Painting” is the stage, the foundation where my theories of language, of history, of abstraction play themselves out. The confluence of these two works opened up a capacious space. I think it ultimately did arrive at something new, in relationship to conceptualism and to the written, the spoken words. 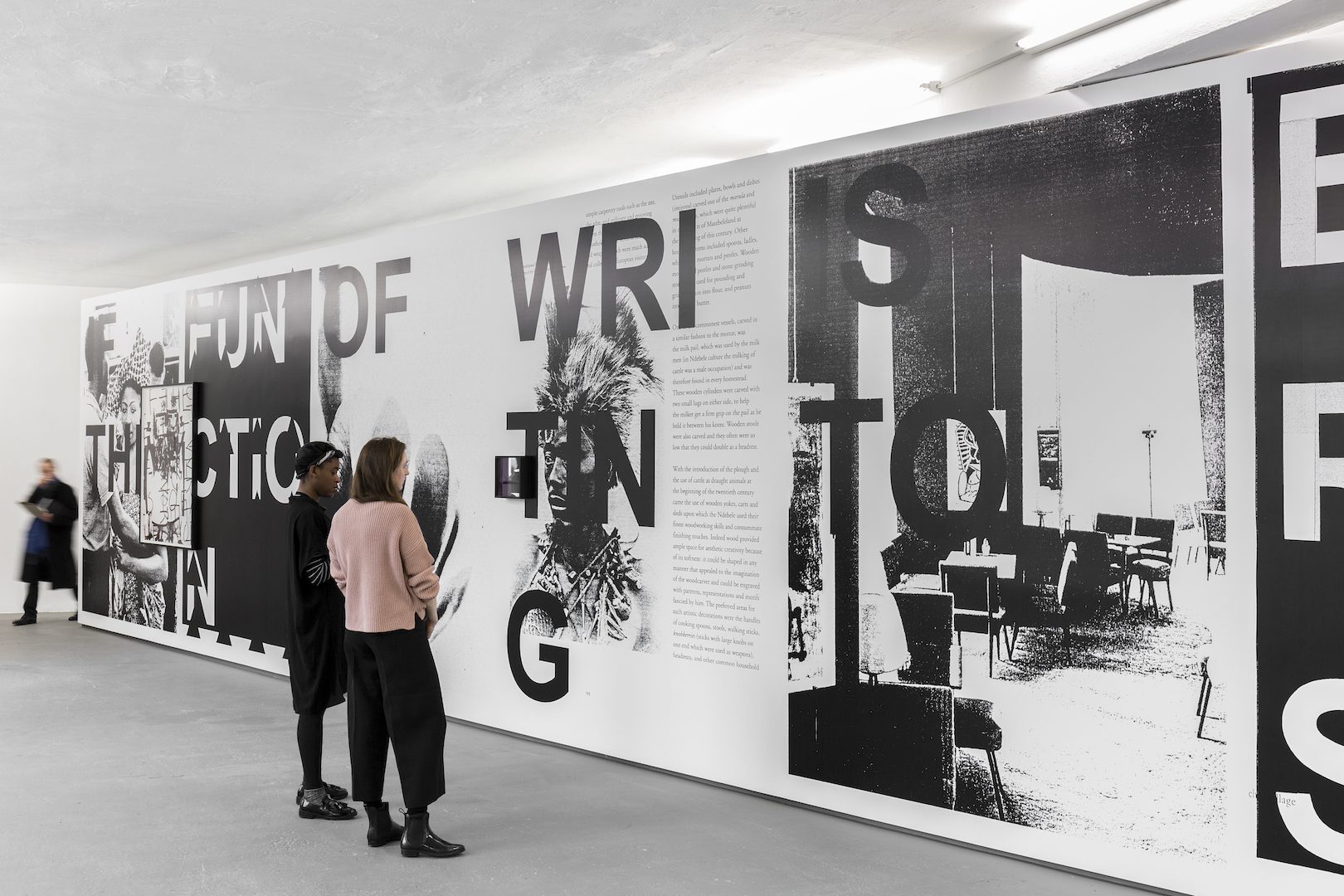 GL: I would like to talk about the making of this space itself. I like the idea of archive as a place which derives from the term’s roots. Somehow this is literally visible in your work: you are producing your archive in your studio by manipulating material (through photocopying, silkscreen printing, cropping, etc.) and then using it to build up a very physical space. Your archive actually becomes tangible: here you build up a large wall, perhaps the most primary element when thinking of a space.

AP: From a practical standpoint, the wall represents a spatial solution, which then ended up influencing the display and the function of the work within the space. It literally bisects the entire gallery space and became a kind of a continuous surface. The wall works with those different images and references: from the couple dancing during the Congo Independence Day in 1960 to a photograph of a flower by a Bauhaus student to a documentation of the first Documenta to fabric samples. All of these works are using language in variant degrees of abstraction. I think the architectural disruption becomes a question of legibility in terms of space, how we perceive and move through space, so there’s a kind of confluence of gesture, both in a grave and playful way. 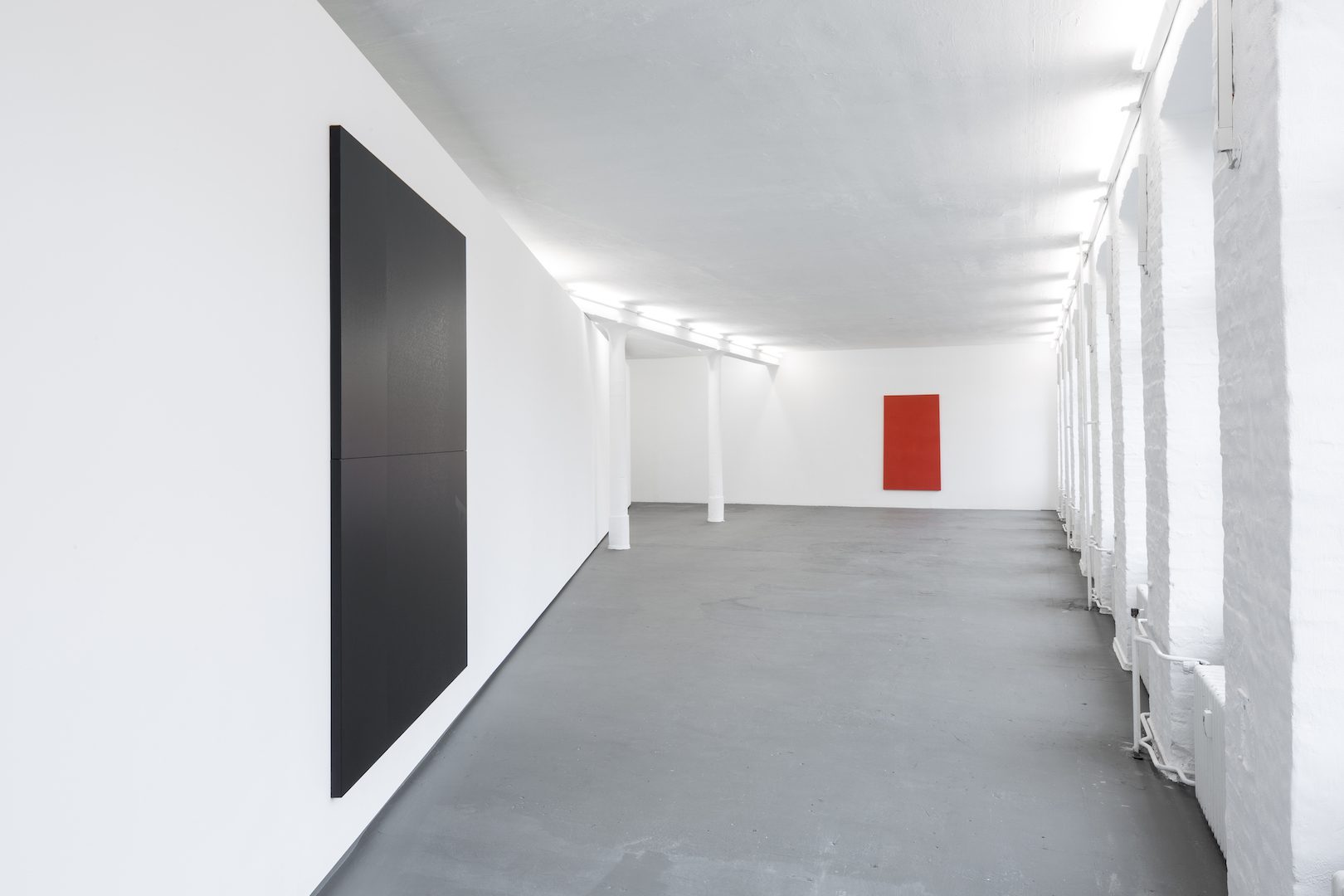 GL: I read that you will publish your “Black Dada Reader” in the course of the exhibition. Can you tell us more about this upcoming publication?

AP: The ambition is to publish the “Black Dada Reader” during the course of this exhibition and have a book launch in Berlin. The book has about 300 to 400 pages and began as an in-studio publication that was flashing out this idea of Black Dada. Now it contains essays which refer to people like Hugo Ball, W.E.B. Du Bois, Stokely Carmichael, and Gertrude Stein, as well as artists from different generations, such as Joan Jonas and William Pope. L.; they are written by curators and art historians from Adrienne Edwards to Jenny Schlenzka, Laura Hoptman and Tom McDonough to Susan Thompson. This publication will be representative of a process of translation, I hope it lives up to its potential and inherits generosity.

Adam Pendleton, shot him in the face, February 24 – May 14, 2017, KW Institute for Contemporary Art, Berlin