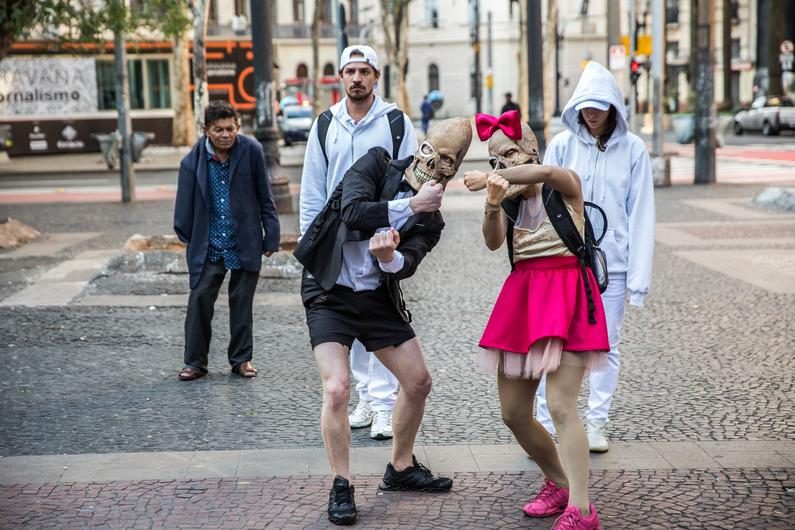 In Conversation with William Pope.L

In this podcast episode produced by Fresh Art International, American artist William Pope.L tells the story of Baile, or Ball, the endurance performance he created for the 32nd São Paulo Biennial.

In this podcast episode produced by Cathy Byrd from Fresh Art International, American artist William Pope.L tells the story of Baile, or Ball, the endurance performance he created for the 32nd São Paulo Biennial. Based on Pope.L’s research into recent political frictions and social inequalities in Brazil, Baile involves three pairs of professional dancers who walk and dance in shifts for four days straight along a path that circles the heart of the city.

Festa de Debutante, the traditional coming-out party for young women in Brazil, inspires the dancers’ costumes. They carry their soundtrack with speakers in a small backpack. Two attendants in white hoodies marked with a black skull and crossbones follow a few steps behind. We shadowed the processional to capture this conversation near midnight on the second day of the performance.

More about the artist:

Since the mid-1970s, William Pope.L has made use of humor and irreverence in his performance, installation, painting, sculpture and drawing. His research-based practice delves into issues of race in the United States, the reflection of social structures in public spaces and the privileges of certain social groups. For the 32nd Biennial, the artist developed the street performance Baile  [Ball] (2016) that followed a route designed to cross areas marked by deep socioeconomic disparities. The performance resonates with Blink (2011), an action that Pope.L presented in New Orleans, USA, five years after deadly Hurricane Katrina. For this project, the artist gathered volunteers to pull a black-painted ice cream truck through the streets of the city. Turning the back of the truck into a screen for the projection of photos that residents had sent to him, Pope.L exposed the community’s enduring sense of loss.

The 2017 Biennial at the Whitney Museum of American Art, New York, (the longest-running bi-annual survey of American art) features a pungent new installation titled Claim. For  Claim, Pope.L created a grid of 2,755 slices of bologna, each affixed with a black-and-white photocopied snapshot of a person. A text mounted within the work “claims” that the number of slices corresponds to a percentage of New York’s population of 1,086,000 Jewish residents. The work’s calculated absurdity questions the power of big data and reveals how such counting lends itself to systemic discrimination.

Pope.L will also present a new project for documenta 14, an international exhibition titled Learning from Athens. For documenta 14, participating artists have been invited to think and produce within the context of the emerging dynamic relationship between Kassel, Germany, and Athens, Greece, and to develop a work for each of the two locations.

Note: This text references the Biennial website and a Fresh Art International podcast episode recorded with William Pope.L in 2011.