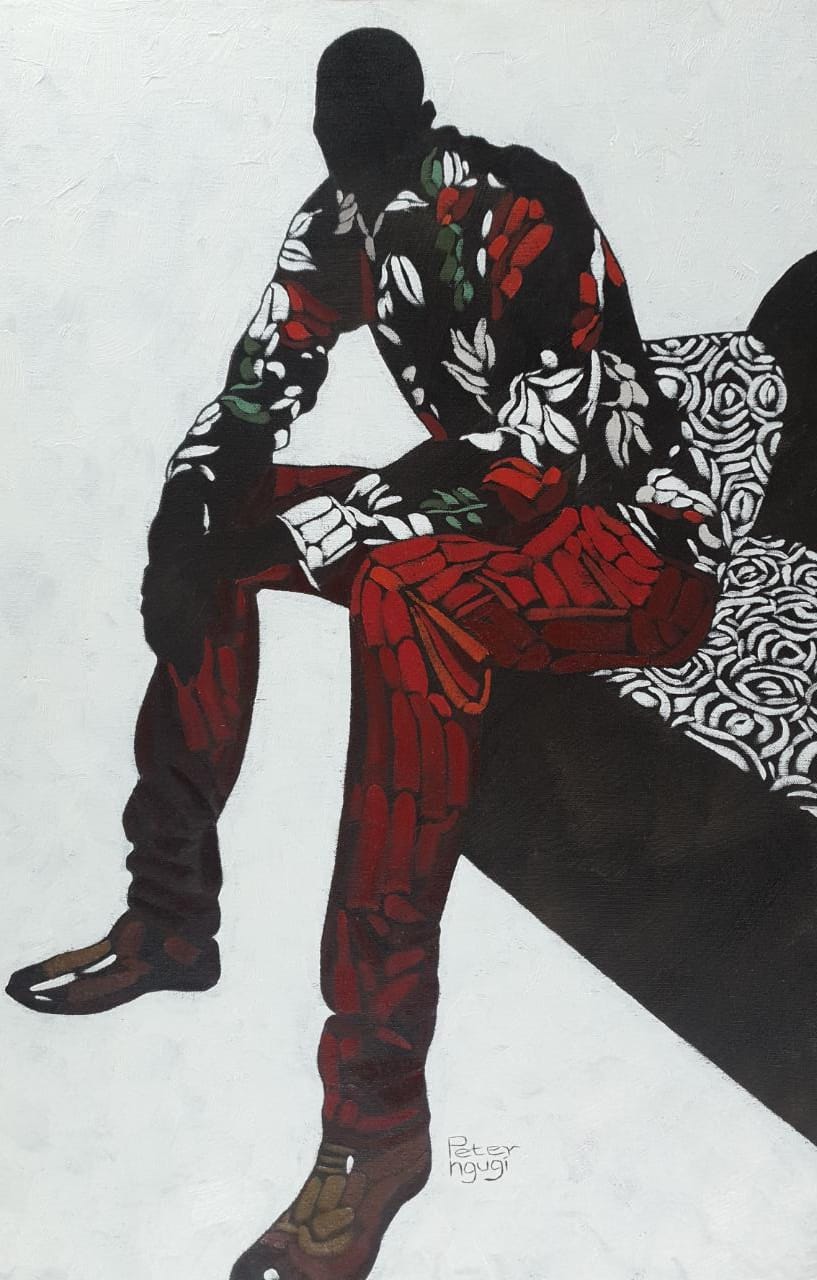 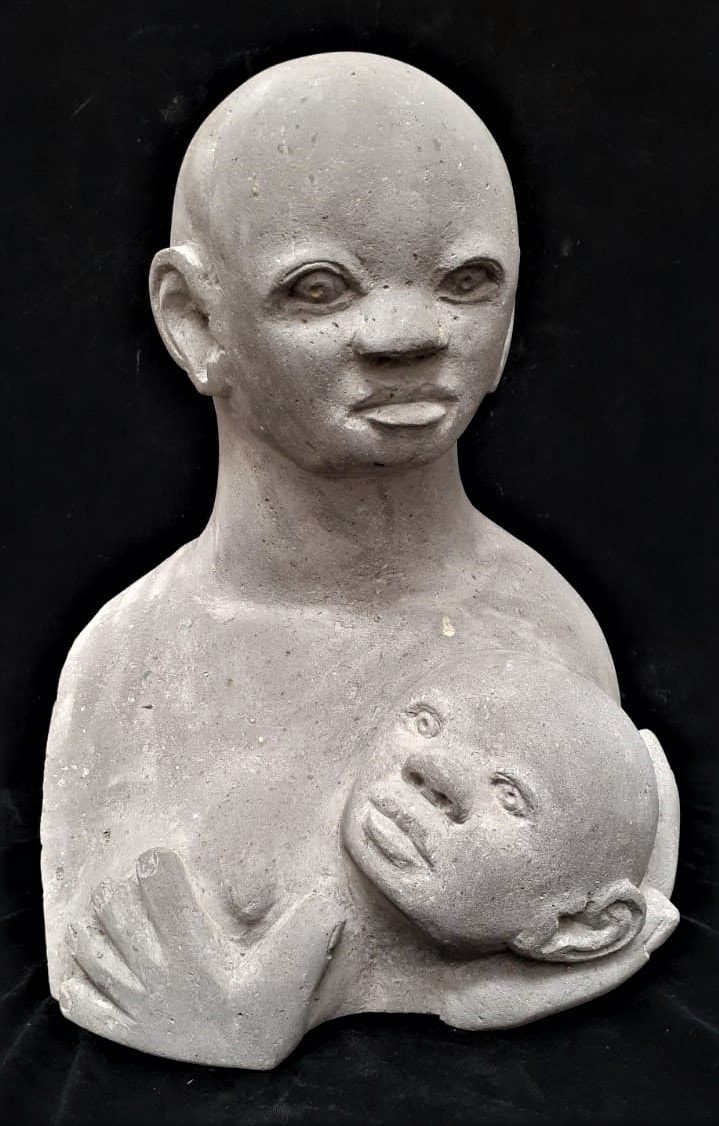 Anthony Wanjau, Mother and Child, stone sculpture. Courtesy of One Off Gallery
2/6
2/6 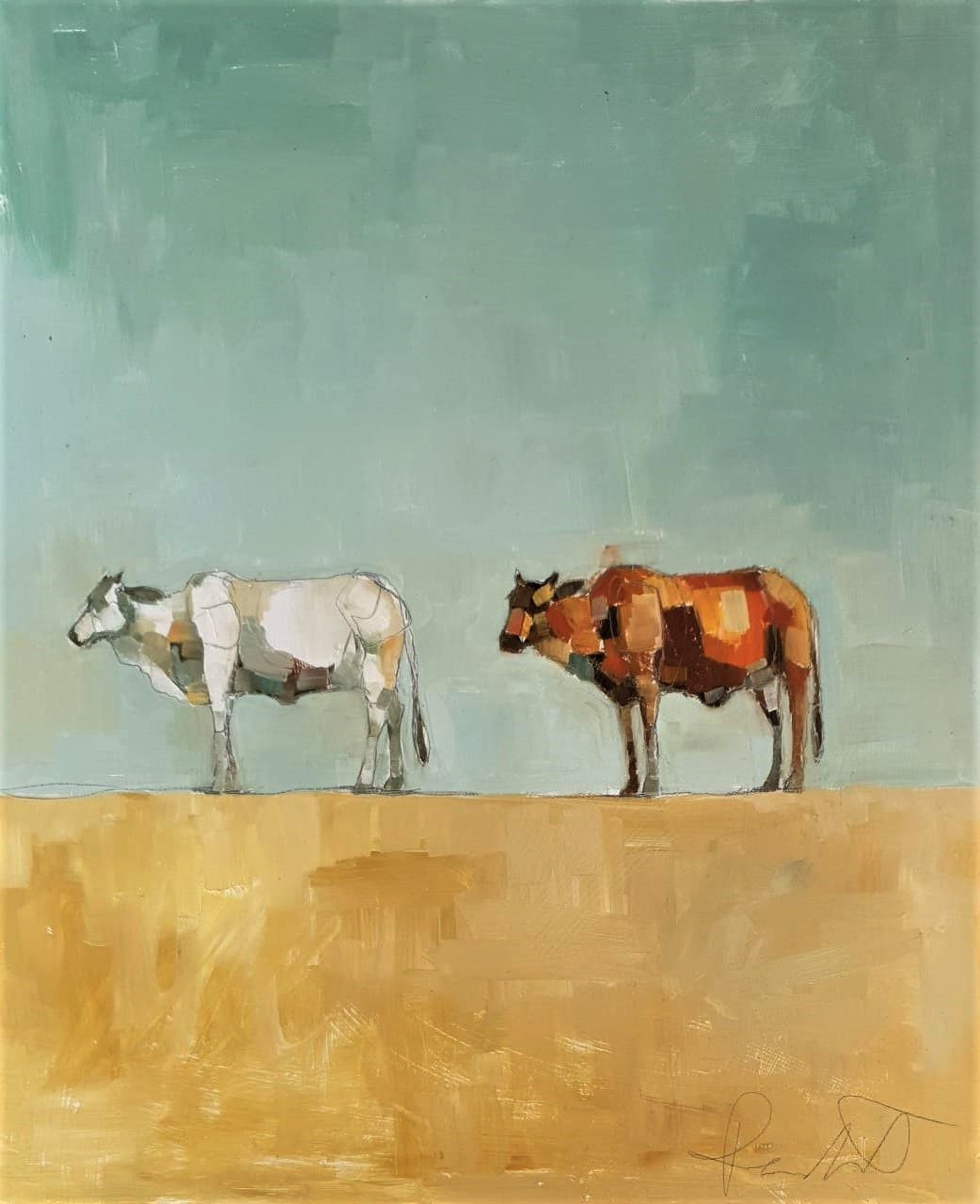 Olivia Pendergast, Two Cow, oil on aluminium sheet. Courtesy of One Off Gallery
3/6
3/6 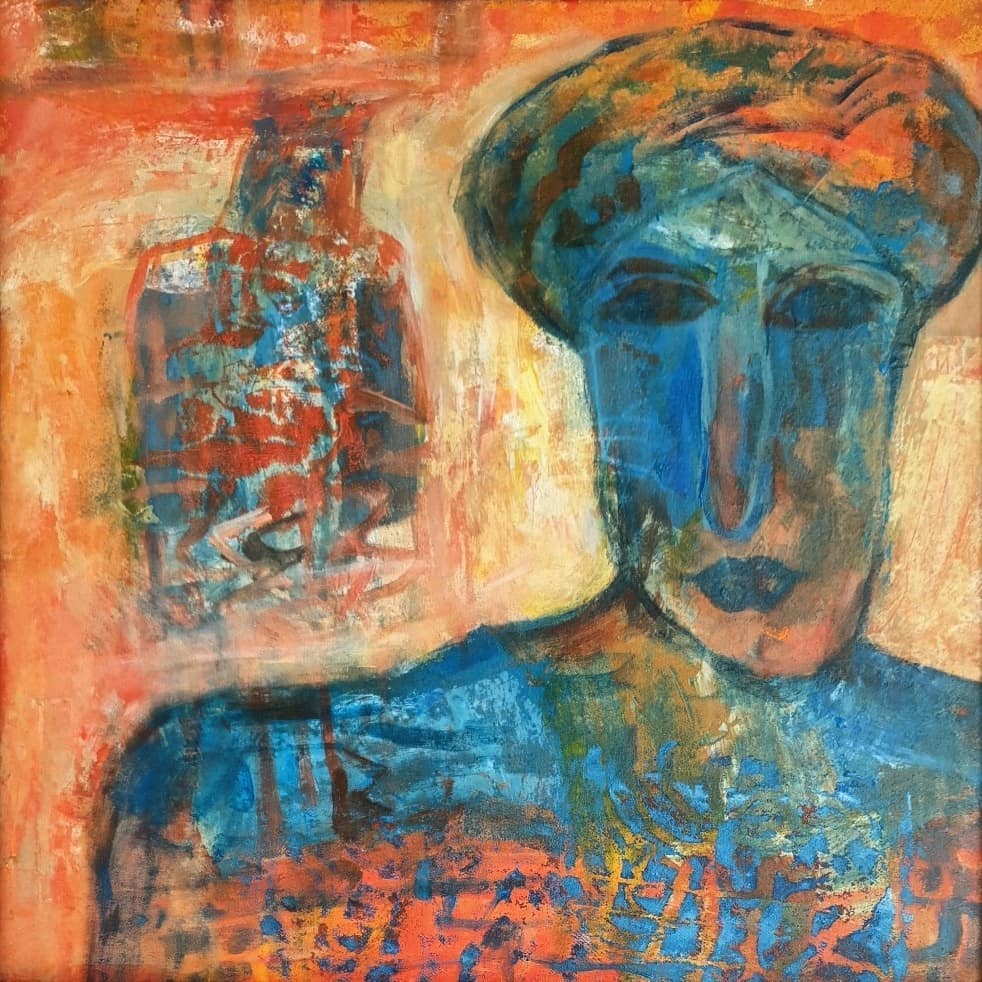 Hussein Halfawi, Untitled, acrylic on canvas. Courtesy of One Off Gallery
4/6
4/6 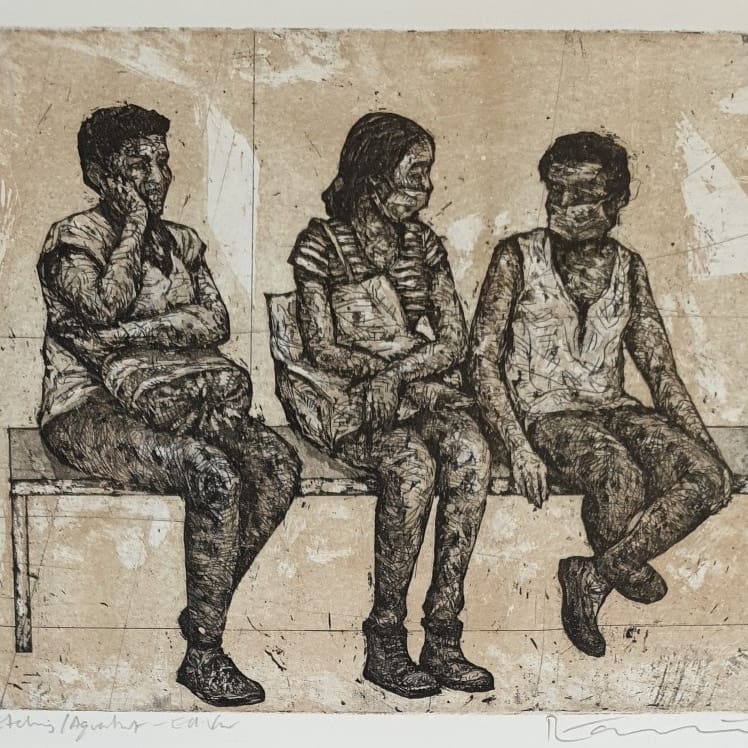 Peterson Kamwathi, Untitled, colour aquatint etching on paper. Courtesy of One Off Gallery
5/6
5/6 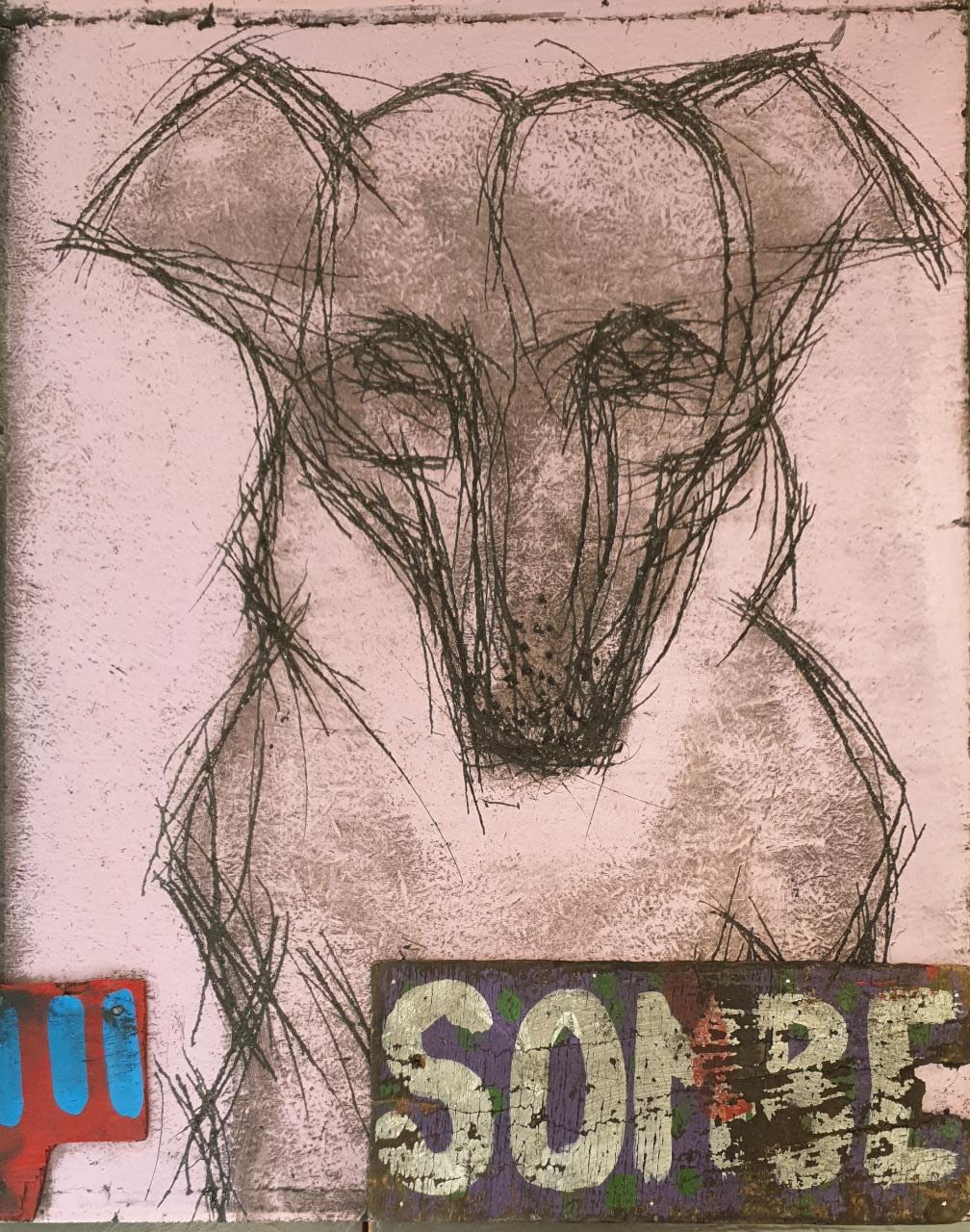 El Tayeb Dawelbait, Untitled Dog. Courtesy of One Off Gallery
6/6
6/6

Bidding for Art on WhatsApp while in Lockdown

The One Off Gallery in Nairobi started to sell art via messaging apps a few years back. This is now one of many examples of how to take a constructive approach during the crisis of the pandemic.

Peterson Kamwathi, Untitled, colour aquatint etching on paper. Courtesy of One Off Gallery

As a new wave of the COVID-19 pandemic paralyzes life in Kenya again, one art gallery is reaching out to locked-down audiences through art auctions on WhatsApp.

In a pioneering initiative, the One Off Gallery in Nairobi held a live auction in March to raise money for the TNR Trust Nairobi, an animal charity providing health services to cat and dog populations in low-income areas on Nairobi’s outskirts. Amy Rapp, founder of the TNR Trust, explains that the trust is totally dependent on donations to fund its rabies vaccination campaign and free sterilization services.

Sixty-one contemporary artworks, primarily by Kenyan artists, went under the hammer, and bids came in from pre-registered attendees around the world. Some people turned up at the gallery, but the majority followed remotely. There were buyers from Kenya, Europe, the US, Hong Kong, and the UAE – both regulars and new clientele. “The format is less formal and not as stressful for bidders,” says Carol Lees, director and curator of the One Off Gallery. “We had people bidding from around swimming pools and on holiday in the Masai Mara national park.”

The usual auction protocols were in place – auctioneer, ground rules, starting bids, minimum increments, descriptions of each artwork and artist. Photographs of the lots rolled up on phone screens one by one and the entire event was silent, with no video feed. Yet it was an exciting two and a half hours, especially when the more popular pieces appeared, with messages flashing into the chatline just seconds apart.

El Tayeb Dawelbait, Untitled Dog. Courtesy of One Off Gallery

A thrilling tussle ensued for an untitled work showing a dog etched onto a mixed-media board by the highly regarded Sudanese artist Eltayeb Dawelbait. The subject matter was a marked departure from the Kenyan-based painter’s usual themes of fractured faces and figures on reclaimed wood panels, but all three of Dawelbait’s three dog works were snatched up.

Tapping into Kenya’s vibrant mobile technology space, messaging apps such as WhatsApp have become a new channel for connecting galleries and buyers in these socially distanced times. Kenya has one of the most advanced mobile telecommunication sectors in Africa, characterized by low-cost smartphones, strong network providers, and widespread use of mobile money transactions. You can purchase anything from groceries to airline tickets with mobile money. So in addition to the usual modes of payment, bidders at the TNR auction had the option of paying with their mobile wallets.

Auction lots were mostly from regular One Off Gallery artists, and consisted of both two- and three-dimensional pieces including photography. They spanned landscape, still life, portraiture, and abstraction. Says Lees, “Many of the registered bidders are gallery clients so we couldn’t stray too far from the ‘tried and tested’ for our particular client base, which is contemporary African art.” Unsurprisingly, the dog was a prevalent subject given the purpose of the event.

Participating artists donated existing pieces or specifically created artworks, all of which – especially those by more established artists – were moderately priced. Mixed-media artist Joseph ‘Nabster’ Chege took a plate and transformed it into a statue of a quirky little dog with a lolling tongue.  Justus Kyalo, one of the best-regarded abstract artists in Kenya, contributed a sublime oil on canvas called More Light a Little. It was one of the pricier pieces at USD$3000, but some cachet comes from owning a work by such an artist. Peterson Kamwathi, who has been exhibited around the world, contributed two aquatint etchings on paper featuring masked individuals and following his practice of analysing contemporary issues. Both went for over $1000 each, more than five times the starting price.

Hussein Halfawi, Untitled, acrylic on canvas. Courtesy of One Off Gallery

Belgian-born wood artist Marc Van Rampelberg’s gorgeous furniture has been purchased by Hollywood stars and former US President Jimmy Carter. His piece for the auction was an exceptional honey-brown wall table made of mvule (African teak) wood, and crafted with his signature precise lines and flowing curves. It sold at $1000, triple the minimum bid.

One Off held its first sale by WhatsApp some years ago, when dealing with a large collection from a client leaving Kenya for good. The event’s success pointed to an unexplored mode of reaching auction bidders globally. The TNR Trust fundraiser is its fourth initiative on WhatsApp. “The challenges are not too many – it is low cost with low overheads and a great option for charity events,” says Lees. She adds a caution, however: “If people only see the works online there can be some surprises when they are united with their acquisitions!”

One Off plans to continue with this model while reviewing a system of protecting bidders’ identities, which is complicated on WhatsApp “because it only takes one person in the group to have the bidder’s name saved and their foil is blown.”

Although WhatsApp is widely used in Africa, no other gallery is actively using it for art auctions. But the use of communication technology in the arts is slowly gaining pace on the continent. Several auction houses in South Africa and Nigeria, Africa’s leading art markets, have held hybrid live-streamed events since the outbreak of COVID-19.

Kari Mutu is an independent writer based in Nairobi, Kenya. Mutu writes for various publications in East Africa on arts, culture and about the people making a difference in these fields.