Asmaa Walton speaks to metalsmithing artist Carl Nielbock on his life-changing journey from Germany to Detroit.

I pulled up to a large building located on the eastside of Detroit, accompanied by Detroit photographer Anthony Parker, to await metalsmithing artist Carl Nielbock. Nielbock, born in Celle, Germany, moved to Detroit in the mid 1980s to connect with his father and a side of his family that he never knew.

As I stood outside on this odd 10°C day in February, I admired a large metal sculpture that read “Detroit,” stretching almost the entire length of his long fence. A few moments later, a black truck arrived and a tall man hopped out and walked right up to shake my hand. We exchanged introductions before being herded into his space, C.A.N. Art Handworks. Once sat inside, I noticed an older gentleman sitting to my left. Nielbock said, “Oh, that’s my dad.” I smiled, knowing that his father was the whole reason he moved to this city. 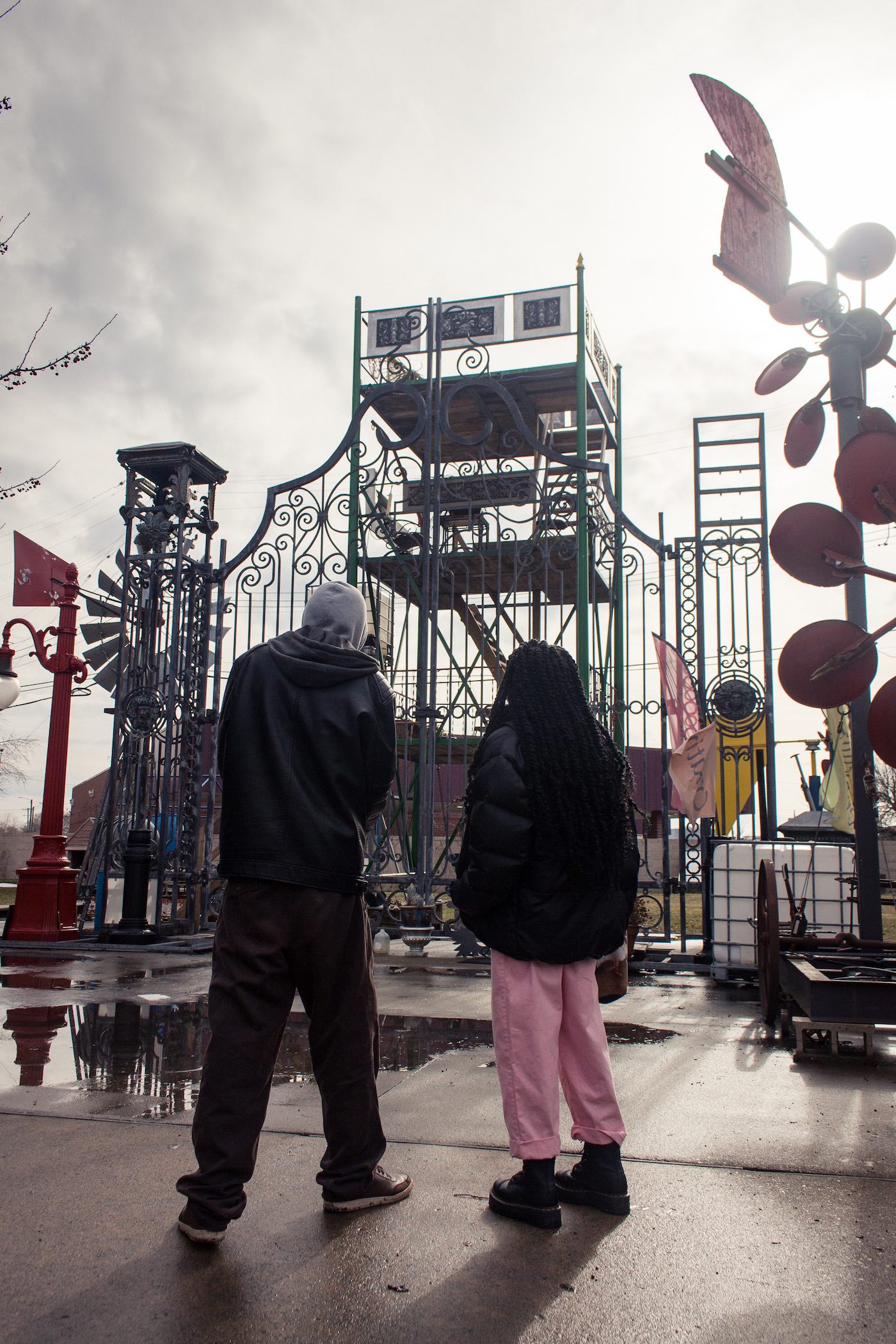 I was immediately greeted by large equipment, metal scraps, and works in progress. Nielbock began by talking about his introduction to metalsmithing and how that had changed the trajectory of his life. He spoke about his first time seeing someone working with metal and knowing that it was what he was destined to do. This brought us to a conversation about skilled trades, which he is a strong advocate for. “I know how important skilled trades are to people that are not academically inclined,” he said. “They’re like creative people and I know that every person — just like with your photography and your writing — every person has a talent. You don’t go against your talent. You have to work with your initial gifts, but if you never get an introduction, if you never see it … it would never happen.” In the most simple terms: You don’t know what you don’t know. If you have no exposure to a skill, regardless of talent it is highly unlikely that you will ever attempt it due to lack of access. Access is a major problem in Detroit that is stagnating citizens. Nielbock believes that introducing more skilled trade programs could remedy issues in the city. In 2017, a partnership between Detroit Public Schools Community District, the Detroit Employment Solutions Corp., the City of Detroit, and Detroit’s Workforce Development Board was formed to renovate Randolph Career Technical Education Center. The goal was to attract 900 students and 900 adults for its training programs providing skills in high-demand fields such as carpentry, masonry, plumbing and pipefitting, heating, ventilation, and air-conditioning, electrics, and more. This step for the city shows that perhaps more people are on Nielbock ’s page.

Having done prior research I knew why Nielbock had moved to Detroit, but I was curious about how it felt. Imagine leaving one country that is home to half of your identity to travel to a country that represents the other half that you know nothing about. Nielbock came to the city which the largest Black population in the US. Asked how different Detroit felt from Germany, he responded: “Different, like a different planet. I had never seen so many Black people in my life. I had never seen Cadillacs and skyscrapers or anything like that. I liked everything, it didn’t matter. I liked the bum riding down the street, I liked the bag lady with the shopping cart, I liked everything. I felt at home, liberated.”

In November 2018, C& hosted a workshop that brought together writers from the US and Germany for a few days of dialogue. An interesting perspective I received from Afro-German participants was the connection some felt to Black American culture as a result of exposure through media. Although that media has changed tremendously since his arrival, Nielbock said he had similar experiences. “I thought like everybody knew what happened, with Roots and stuff. Roots the TV show! I saw it in Germany, every episode – I didn’t skip a beat. Nobody wanted to know anything about Roots. Africans? Slaves? Man, give me a break.” 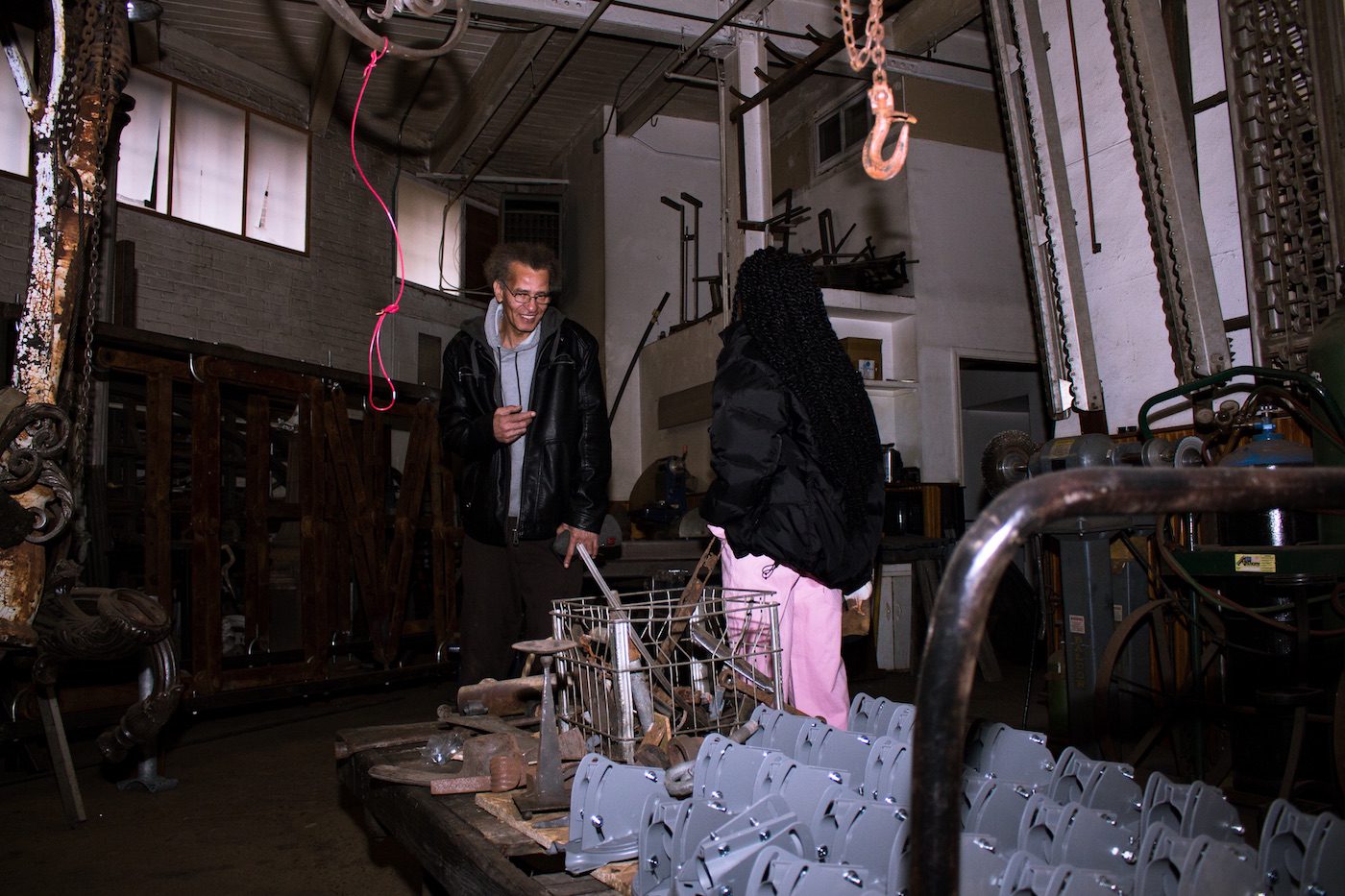 As a Black American I know firsthand that many of us are struggling to find our connection to countries outside of the US. Most of our lineage can only be traced back so far, especially if we have two Black American parents, before we hit the inevitable wall of slavery. During this conversation with Nielbock I realized that even people who identify as Black outside of the US may have this same struggle: a longing for knowledge that you may never be able to truly acquire. He stated that, “There is a connection to your genes and your cultural heritage that you have to be attended with to be a whole person…” As a way to start filling that void and connect to the other side of his culture, he began an African art collection. While speaking about his collecting, Nielbock shared that he had recently completed an ancestry test and the findings surprisingly reflected his growing collection of African art. “When I was trying to find myself I knew everything about this [Germany]. I grew up there but I didn’t know nothing about my lineage from my dad – from my Black dad down there [in Africa], so at first I started collecting some African art …then I started bumping into things that were especially made in [Western Africa], continuously bumping into metal objects that were made precolonial in this area.”

Beginning an art collection based on innate feelings, then finding out it can be specifically linked to your heritage must be an amazing discovery. A sense of connection to place is something that many Black people search for and Nielbock found it within the realm of metalwork and sculpture, a world he was already engulfed by. As Nielbock shared the results from his ancestry test, I could feel a sense of pride. Almost as if he had uncovered a missing piece thought to be lost in the vastness that is the African Diaspora.

I ended our interview with the question, “What has the city of Detroit taught you since you’ve been here?” Nielbock paused for a moment and replied, “To be true to yourself.” Detroit is an unapologetic city. Detroiters are who they are and if you don’t like it that’s your problem. From my point of view as a Detroit native, Carl Nielbock ’s personality seems to fit right in – he has become a true Detroiter. He moved here and built his business from the ground up and understands the importance of the city having resources for its citizens. Detroit is lucky to have a visionary like him make our city his home.

Asmaa Walton is from Detroit and received a master’s degree in art politics from New York University’s Tisch School of the Arts.