Sean O'Toole reveals his highlights of this past year...

In September, the Ukrainian author and satirist Andrey Kurkov, famous for his novel series about an obituary writer and his penguin, visited Cape Town to speak at a literary festival. Mostly, he spent his time talking about Ukraine’s difficult relationship with Russia, which is also the subject of his recent non-fiction book, Ukraine Diaries, an episodic account of living and working (and also sometimes carousing) a few hundred metres from the Maidan, Kiev’s central square and site of a bloody revolt in February. Kurkov, who I had the pleasure of interviewing onstage, reminds me of many artists I know.

“I have neither the desire nor the strength to appear onstage and play at being a politician,” he writes in Ukraine Diaries. His hesitancy is clarified in a line from his 2004 novel, The President’s Last Love, incidentally now banned in Russia: “Politics is for earthworms.” Here’s the thing, earthworms loosen and aerate soil, improving soil drainage. Isn’t that what good artists do too, metaphorically speaking: they aerate congested and dark places, giving us oxygen to think? Well, not necessarily.

Some of my personal exhibition highlights from the past year had little, if anything to do with the tumultuous politics of the present. Take Serge Alain Nitegeka’s Black Passage, at Stevenson, a confident architectural-scale elaboration of this Burundian-born painter and sculptor’s formalist preoccupations, and FNB Art Prize winner Turiya Magadlela’s materialist deconstruction of the grid in her solo exhibition Impilo Ka Lova, at Blank Projects. 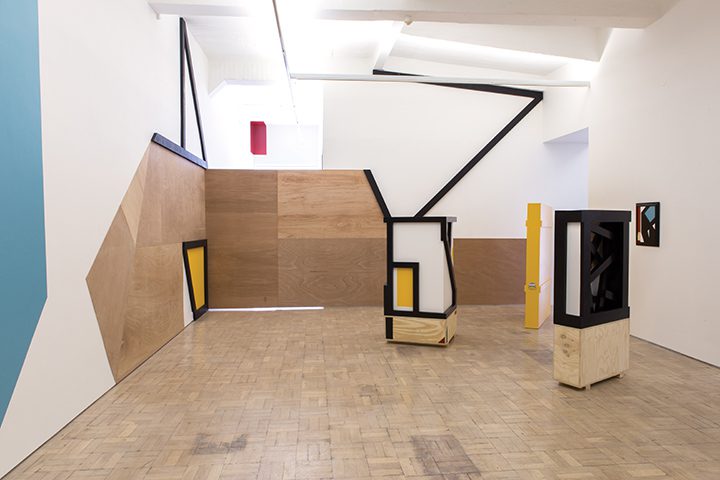 Both shows explored concerns to do with line, form and colour, although both were distinguished by their spatial ambitions. Nitegeka reconfigured Stevenson’s gallery with new doorways and sealed-off existing passageways, while Magadlela crisscrossed Blank’s floor with a grid of nylon pantyhose whose shape echoed her assemblage pieces and presented obstacles to the indolent viewer aiming to casually flit through.

South Africa got all tripped up this past year – and is still falling, despite Rhodes having fallen. On 9 April, two days before photographer Sabelo Mlangeni’s superb portrait study of poor whites, My Storie (2008-2012), part of his return-to-form solo exhibition No Problem, was due to come down at Stevenson, authorities at the nearby University of Cape Town acceded to student demands and removed Marion Blair Walgate’s 1934 bronze statue of British-born mining magnate and plutocrat Cecil John Rhodes. This signal event in the cultural and political life of post-apartheid South Africa has provided the impetus for a further wave of student protests nationally. 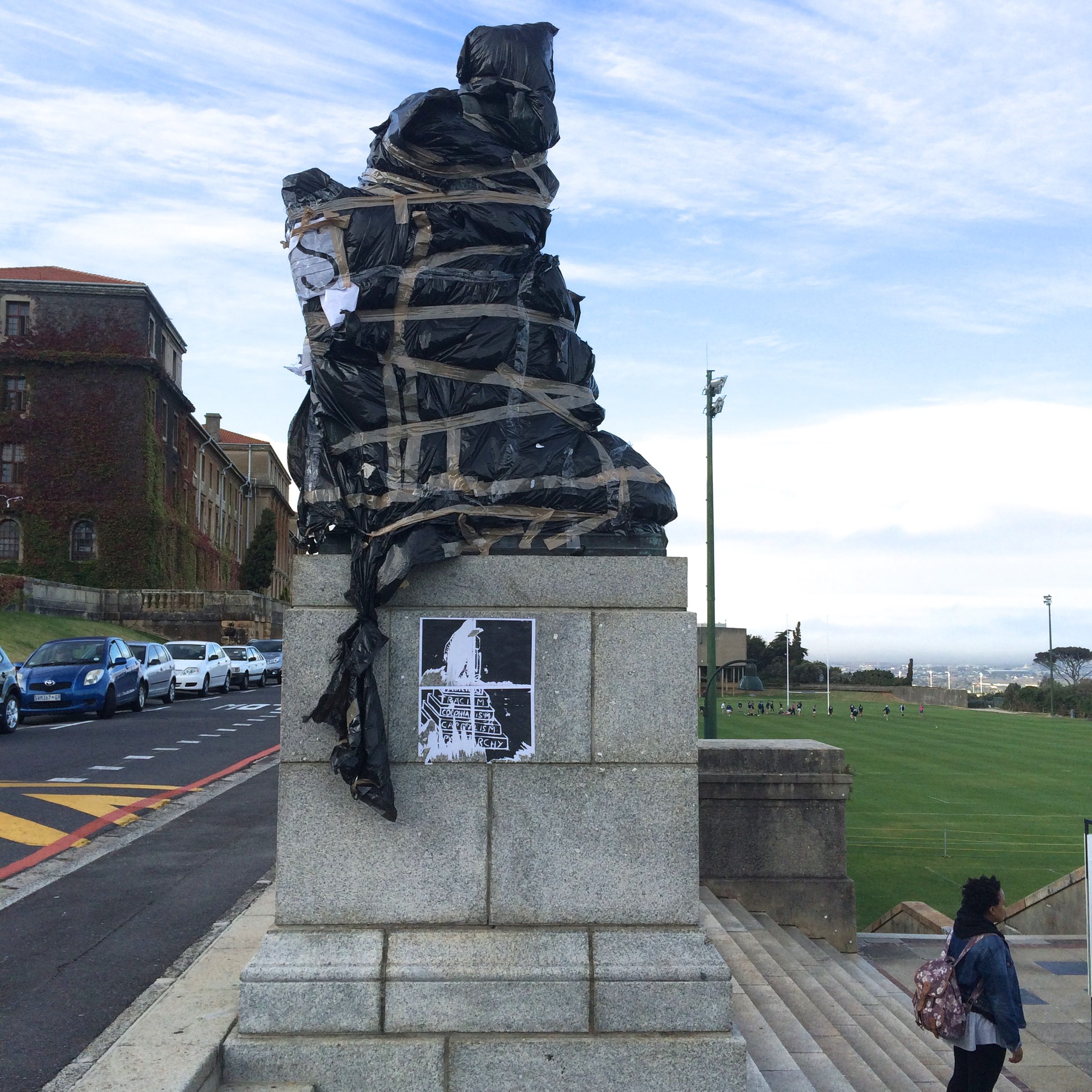 Marion Walgate’s 1934 bronze sculpture portraying Cecil John Rhodes was covered over in the weeks before its removal. Photo: Sean O’Toole

At issue, and still largely unresolved, despite the removal of the statue, are widespread concerns over white privilege, systemic racism and state inertia in delivering a key transitional promise, “A better life for all.” The toppling of Walgate’s deferential statue of Rhodes is, however, by no means a discrete national event, South Africa’s travails keying into related things happening in the US and Britain. They include the on-going #BlackLivesMatter campaign, which has now infiltrated US campus politics, and institutional attempts to redress historical racism in both US and British public art collections.

Interestingly, at least for the moment, the toppling of Rhodes exists chiefly as a photographic event. A number of photographers witnessed the event, the overwhelming majority amateurs armed with smartphones. The professionals amongst them included Sipho Mpongo, a 22-year-old Capetonian whose emerging documentary practice saw him awarded a Magnum Foundation fellowship earlier this year, as well as a meaningful career punt by the influential Lens Blog of the New York Times. Mpongo’s insider perspective on the student movement, widely published online, is essential viewing. It records the solidarity that underpinned the #RhodesMustFall campaign; it also presents a meaningful study of youthful optimism in a time of greying political and economic ideologies enforced by greying old men.

In contrast to Mpongo, 84-year-old David Goldblatt, who remains in robust good health without much grey, viewed the events of 9 April as an interested outsider. The Pursuit of Values, Goldblatt’s career-spanning survey at the Standard Bank Gallery in Johannesburg, included only one photograph from the protracted protests that led to the statue’s removal. Large in scale and uncharacteristically crowded with human subjects, Goldblatt’s black-and-white photo is essentially a news shot. For all its historical discontinuity, Goldblatt’s Transkei (1975), a formalist essay focused on rural custom and poverty, stood out on his survey for its commitment to quiet encounter. 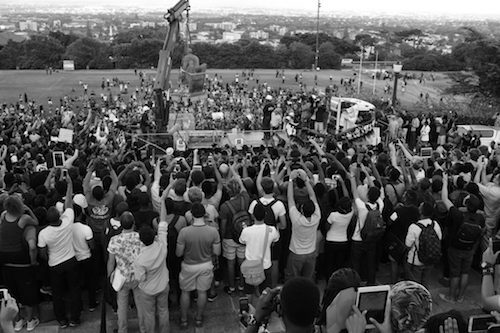 David Goldblatt, The dethroning of Cecil John Rhodes, after the throwing of human faeces on the statue and the agreement of the University to the demands of students for its removal. The University of Cape Town, 9 April 2015, 2015, silver gelatin print

Okwui Enwezor, a key international champion of Goldblatt, took up the mantle of artistic director of the Venice Biennale this year, using the opportunity to ambitiously map the world’s crises and discontinuities. The outcome was not dissimilar to Goldblatt’s news photo: urgent, crowded, political, newsworthy, meta, and sub-par.

Ideas and fashionable Marxist attitudes mattered more in Enwezor’s All the World’s Futures than the way objects occupy space, and indeed activate one another when carefully placed. A congested riposte to the idea that politics is for earthworms, his at-times bleak show skittered between high conceptualism and arid political posturing. It was also very wordy. Despite striking selections of work by Inji Efflatoun, Glenn Ligon and Terry Adkins, whose Darkwater Record (2003-08) silently replayed W.E.B. Du Bois’s speech ‘Socialism and the American Negro’ as a mute augury, Enwezor’s show lacked the curatorial wonder in the fundamental strangeness of objects – something that distinguished previous Venice Biennale curator Massimiliano Gioni’s effort, and also made Jared Ginsburg’s solo exhibition of eccentric objects on The Natural World Parts 2, 3, 4, 5 & 6, at Blank Projects, such a treat.

Also noteworthy: Gabrielle Goliath’s Elegy (2015), a sombre performance series at the Goodman Gallery in which seven female singers performed an hour-long vocal relay that commemorated the life of 19-year-old Ipeleng Christine Moholane, a youth who was brutally murdered in May outside Johannesburg. Equally astonishing, Kemang wa Lehulere’s History will Break your Heart, a three-part show about Black modernists that incorporates archival work by Gladys Mgudlandlu and Ernest Mancoba into installations created by the artist. 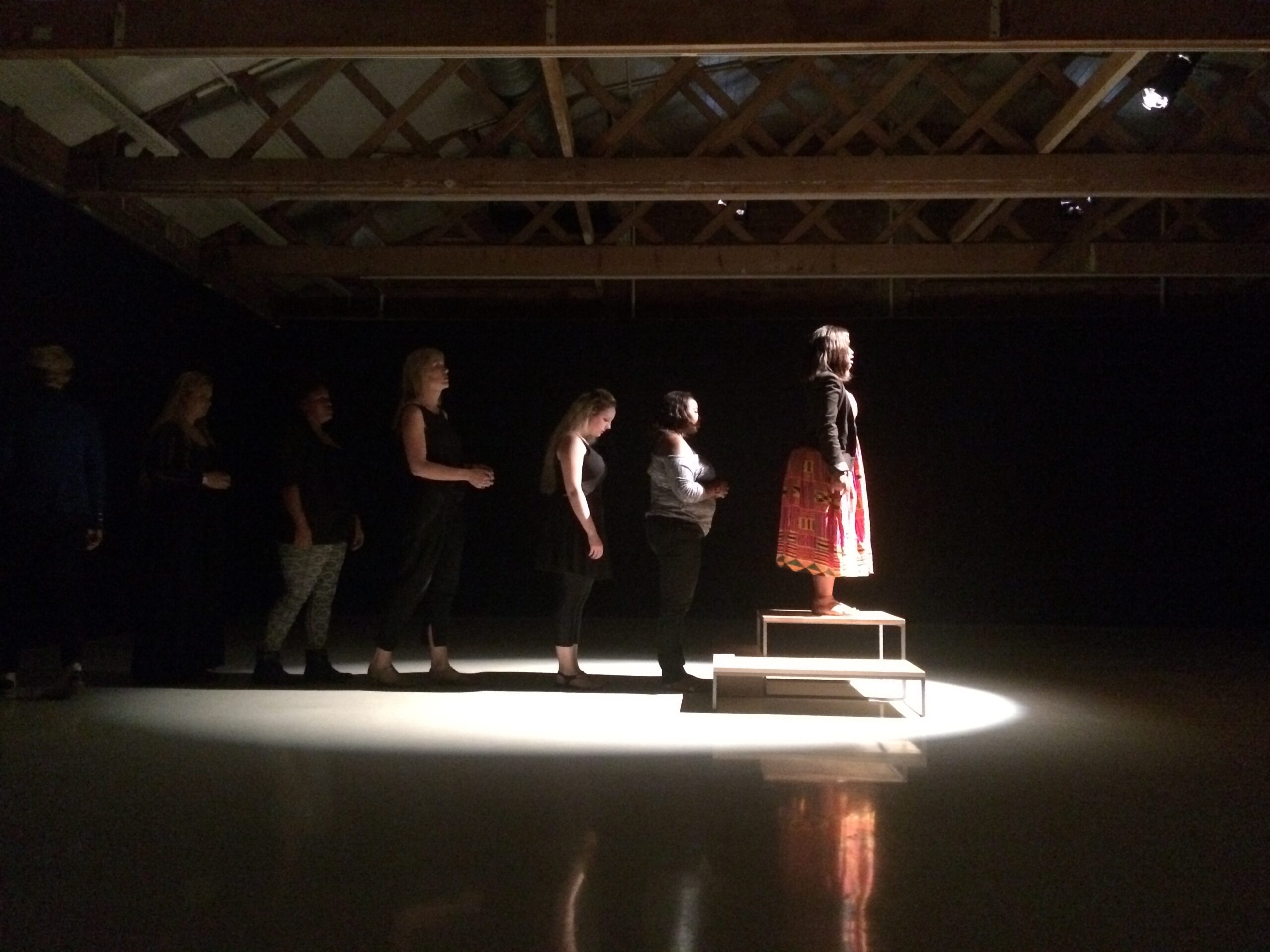 Curator Khwezi Gule used the term “memory work” to describe what Lehulere is doing. It just as capably applies to curators Ruth Sack and Lisa Espi, whose exhibition The Portrait Racket at the Origins Centre in Johannesburg offered a historical account of the hand-painted domestic portraits popular amongst a wide spectrum of South Africans between the 1930s and the 1990s. This unexpected little gem of a show explored the camera’s role in manufacturing identity and ornament. Their modesty and fragility – no bronze here – belies their potency. “They are a visible symbol,” artist Amos Letsoalo is quoted in the exhibition. Visible yes, but intimate and fragile too, a symbol that stakes no claim and has no dominium but in the hearts of a small few.