A New Kingdom of Sisters and Brothers

A wave of new Afro-Brazilian dance and theater in São Paulo is promoting ethical positions that transgress existing hierarchies and build new audiences.

In the last decade, the city of São Paulo has seen a flourishing of productions that, using dance or theater as a base, face Black experience and examine how this reality mobilizes artistic acts within the labyrinths of the Diaspora. These are dramaturgic approaches which capture and recreate memories, interpreting history from perspectives that distrust established modes. These are artists who create in an attempt to redefine values that were crumbling along the way, owing to numerous displacements, silences, and inequalities. These are not outcries, but rather artistic strategies with an eye toward change. 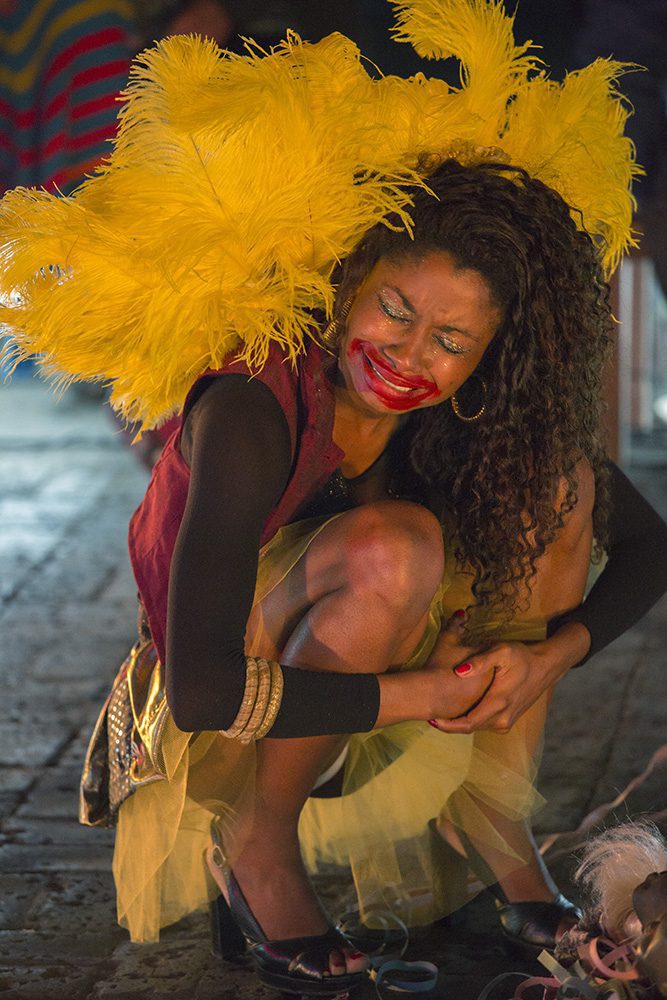 Within the particular field of dance production, among the various actions involved in the search for utterances and listenings for the body, approaching the political via aesthetics and poetics has been addressed with care and depth. In a constantly changing scenario for the city’s cultural politics, where we question an absence of works by Black artists in the contemporary arts scene, creators move from Africanized perspectives, rejecting cliches and stigmas created by dominant discourses, and giving tension to the soothing statements that ignore the racial hierarchy present in the country’s dance history.

These ideas — of rooted feet, spiraling torsos, and arms and legs drawing curving paths, traveling distances and coming back to wholeness — pierced legitimate positions of power, even occupying the academic sphere, with theories, procedures, and references that point to what the cultural critic and feminist bell hooks defines as transgression : pushing against boundaries. In the piece Dikanga Kalunga (2014), by Nave Gris Cênica Company, choreographed and performed by the dancer Kanzelumuka, the varied universe of traditional Bantu expression was the seed for a creation that endowed the body with the elements of ancestral relationships and archetypes of these cultures, so deeply present in the socio-cultural makeup of Brazil. And this piece was not a frivolous collage dressed up as “reinterpretation,” but rather a thoughtful appropriation of conceptions of space, time, and Black experience. Elucidating the tranversalities of gender, race, and class relations, the dancer and actor Kleber Lourenço, in the piece Negro de Estimação (2007), imprints on the bodies of his characters their respective states, while their ironic discourses elucidate the submissive positions assigned to them for being Black, gay, poor, and from the northeast of Brazil. By coming back to and returning dignity to bodies and cultural expressions seen as fora da ordem, that is, not in keeping with the prescribed norms, these artists are situating dance in a just place: as an area of knowledge production. At this crossroads, investigating language is a key element. The young Fragmento Urbano Company, interested in the creative, technical, and symbolical possibilities of urban and Brazilian dance, approximate and interweave the dance genres that accompany their lived landscapes. Originating from the periphery and educated at the intersections of hip- hop culture and the popular traditions of Northeast Brazil, the group feeds on tradition as an manifestation of continuity and invention. In mobilizing creative energy from the landscape of Black experience, these artists bring to the forefront ideas about the body overlooked by hegemonic spaces and discursive practices, which broaden the possibilities of understanding who we are as Brazilians in the face of the tensions and contradictions surrounding us. Blackness is not simply an accessory or an equivalent to dance, it isn’t contained in the material, but rather, developed: in the body and its ancestry. Understanding what we are made of implies distilling the ways and means of perceiving what unites us and what makes us distinct. Nothing other than moving critically.

Returning our attention to theater created from the Black social experience, we will consider several characteristics present in contemporary theatrical productions of the following groups: Os Crespos, Capulanas Cia de Arte Negra, and Coletivo Negro, with a special emphasis on the “civilizing effects of theater with racial concerns” (1) as a guiding concept for this consideration. Among the poetics these groups wield and proclaim, notable is the confrontation and construction of possibilities regarding racism and its effects (emotional, psychological, and social), which seek to make the invisible visible and existent beyond subaltern experiences. Each group, according to its own method of investigating relevant themes to Black experience, and not least among the artists themselves, operates within two major spheres: at the level of symbolic expression when creating and elaborating other forms of representation, and at the level of social experience when performatizing its issues and problems, thereby influencing reality and proposing presence in fields historically remote to Black people, such as theater in Brazil. Apart from the ethical and aesthetic foundations underpinning their work, these groups also have the massive and devoted presence of Black audiences. It seems that the term “audience” isn’t sufficient to describe the magnitude of what happens at these encounters. The characteristics and manner in which the events unfold resemble what the psychoanalyst Maria Rita Kehl identifies as being established in the relationship between the São Paulo-based rap group Racionais MC’s and the homeboys who follow them: “brothers and sisters” may be the term best suited for describing those who share and bear witness to these creations. The idea of brotherhood expresses the feelings present in these encounters, which are mediated by art in the establishment of an alternate reality — one of kinship, a kingdom of sisters and brothers — according equal respect to those who perform as to those who witness.

The notion of brotherhood becomes even more appropriate when we consider that many Black men and women are paternal orphans. The aim is to create a relationship of care, celebration, and education among all those who experience theatrical events put on by the groups. Capulanas, founded by Black women and women from the country’s periphery, in the performance Sangoma (2013) dedicates itself to questions surrounding Black women’s health, deepens these questions, and demystifies certain notions (such as the one leading to the belief that Black women have a higher tolerance for pain, which results in discriminatory and neglectful treatment in public hospitals). By upending these stereotypical perceptions of the body, the artists recover care, love, and healing. In Cartas à Madame Satã (2014), Os Crespos examines intimacy among Black men and the preconceptions and curtailed sociability accompanying this experience, imbuing it with affection. The necessary restitution of dignity also comes up in the work of Coletivo Negro, which, in the piece Movimento Número 1: O Silêncio de Depois… (2011), addresses the dispossession of Black populations since the first African exodus, in addition to the petty game of market logic, which gleefully sells everything and everyone under the guise of progress. To artistically promote the broadening and deepening of these questions — including the subjective, affective, and the pedagogical face of racism and its implications — is one of the primary endeavors of this generation of artists. Even so, Brazil’s non-Black population is absent or distant from these concrete efforts and constructions.

Far from cordoning off these issues, these artists propose the humanization of society as a whole through the inundation of greatly expanded notions of humanity and through the mobilization of values officially silenced by the complex legacies of slavery and racism in Brazil.

Jé Oliveira is an actor, dramaturg, director and founding member of the theater group Coletivo Negro.

Luciane Ramos-Silva is an anthropologist, choreographer, cultural organizer, and member of the editorial advisory board of the magazine O Menelick 2° Ato.

(1) A term that approaches and is in dialogue with a concept developed by the psychoanalyst Maria Rita Kehl in “Radicais, Raciais, Racionais: a grande fratria do rap na periferia de São Paulo” (Rap’s Civilizing Force on the Outskirts of São Paulo).