Tales from the Water Margins

Taking water as its starting point, the 4th Casablanca Biennale looks at how different cultures strongly connected to water can have similar projects of struggle as well as similar cultural geneses. Will Furtado writes about how some of the South-South connections present may set a precedent for future collaboration in the arts.

Situated between the Mediterranean sea and Atlantic ocean, Morocco’s geographical position is embedded with a charged history that can start many conversations. The 4th Biennale Internationale de Casablanca (BIC), entitled Tales from the Water Margins, uses the country’s ambivalent connection to water as a basis for its curatorial strategy. This kind of overall theme can be both a blessing for its regional resonance, and a curse for the trap of formulaic thinking.

That paradox is something that Christine Eyene, the artistic director, addressed head on by making “horizontal,” South-South links. Water Margin is the title of a Chinese novel by Shi Nai’an and Luo Guanzhong that inspired Eyene for its narrative of outlaws fighting the system from the marshes. And Morocco itself as a migration gatekeeper and gateway adds to the complexities present throughout the biennale. As such the selection of around 30 artists from four continents demonstrates through various mediums how presumably different peoples can have similar projects of struggle as well as similar cultural geneses.

Another inspiration for the theme is the artists’ residency founded by the biennale’s initiator, photographer Mostapha Romli, in Essaouira, which plays into BIC’s concept of training people in addition to displaying art. Some of these side projects include inviting external curators to put up parallel exhibitions, and connecting international artists (and their students) with local cultural initiatives. 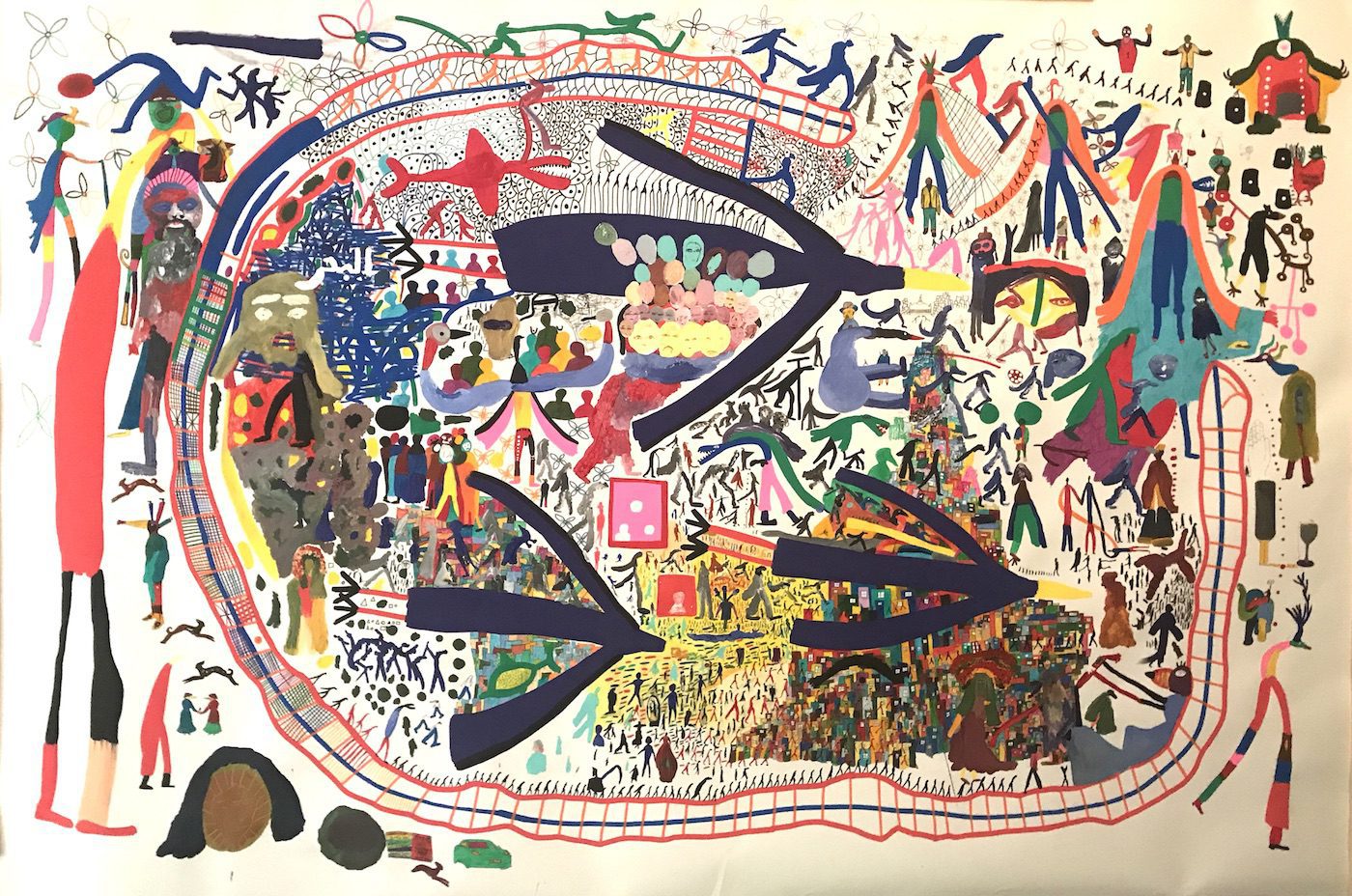 Mo Bala is one of the Moroccan artists bridging many of the biennale’s particularities and complexities. The Casablanca-born artist created an installation in collaboration with Limiditi – Temporary Art Projects, an arts initiative in the fortified Portuguese city of El Jadida, south of Casablanca. Entitled MaBlanca (2018), a set of nine canvas banners depicts stories from the street and markets in Bala’s expressive style of hand drawing with marker pens. One canvas is left blank, an invitation for visitors to contribute to the installation, which is shown at the Instituto Cervantes – one of three active cultural institutes run by former colonizers in Morocco, besides the French and Portuguese ones.

The biennale features several Moroccan artists who deal with a multitude of topics. At the opening evening at Villa des Arts, former b-boy Yoriyas Yassine Alaoui presented a dance performance outdoors with a group of local youths that evoked breakdancing as well as Western contemporary and Sufi dance styles. Inside, Alaoui displays a series of photographs that move away from his better-known semi-staged street photographs into more abstract territory. In the same venue, M’hammed Kilito shows a photography series set in El Jadida, where young men and boys jump from atop old forts into the ocean. These bright, summery, and dynamic images expose Morocco’s layered and dense history, as the forts are remnants of the Portuguese, inside the old Jewish quarter. Rabat-born Amine Oulmakki retains his visually conceptual approach with a video work under the staircase for added privacy. The short black-and-white film simply shows the outline of a pregnant woman’s naked stomach in almost abstract form; a black satin sheet that extends to the hallway covers the screen displaying it. The work comments on public, private, and societal sensibilities.

Complicating notions of nationhood and self

Several artists explore nationhood and borders at Villa des Arts. Shiraz Bayjoo’s room-filling installation interlinks stories of pirates in Madagascar with the French East India Company’s slave trade. Featuring research and original material including videos and portraits, Searching for Libertalia (2018–) brings to light the story of Captain Mission who, according to 17th-century English writer Daniel Defoe, freed the slaves and established a utopian state in Madagascar. How much of it is fiction is unclear, but the story turns the idea of piracy upside down. The collaborative project Bosphorus (2017–2018), by Magda Stawarska-Beavan and Joshua Horsley, looks further into horizontal connections. Consisting of a mesmerizing combination of video projection, hanging sculptural elements, and sound, it reflects on the significance the Turkish strait plays in political shifts and migration – a very similar role to Morocco’s, despite being on the opposite side of the Mediterranean. 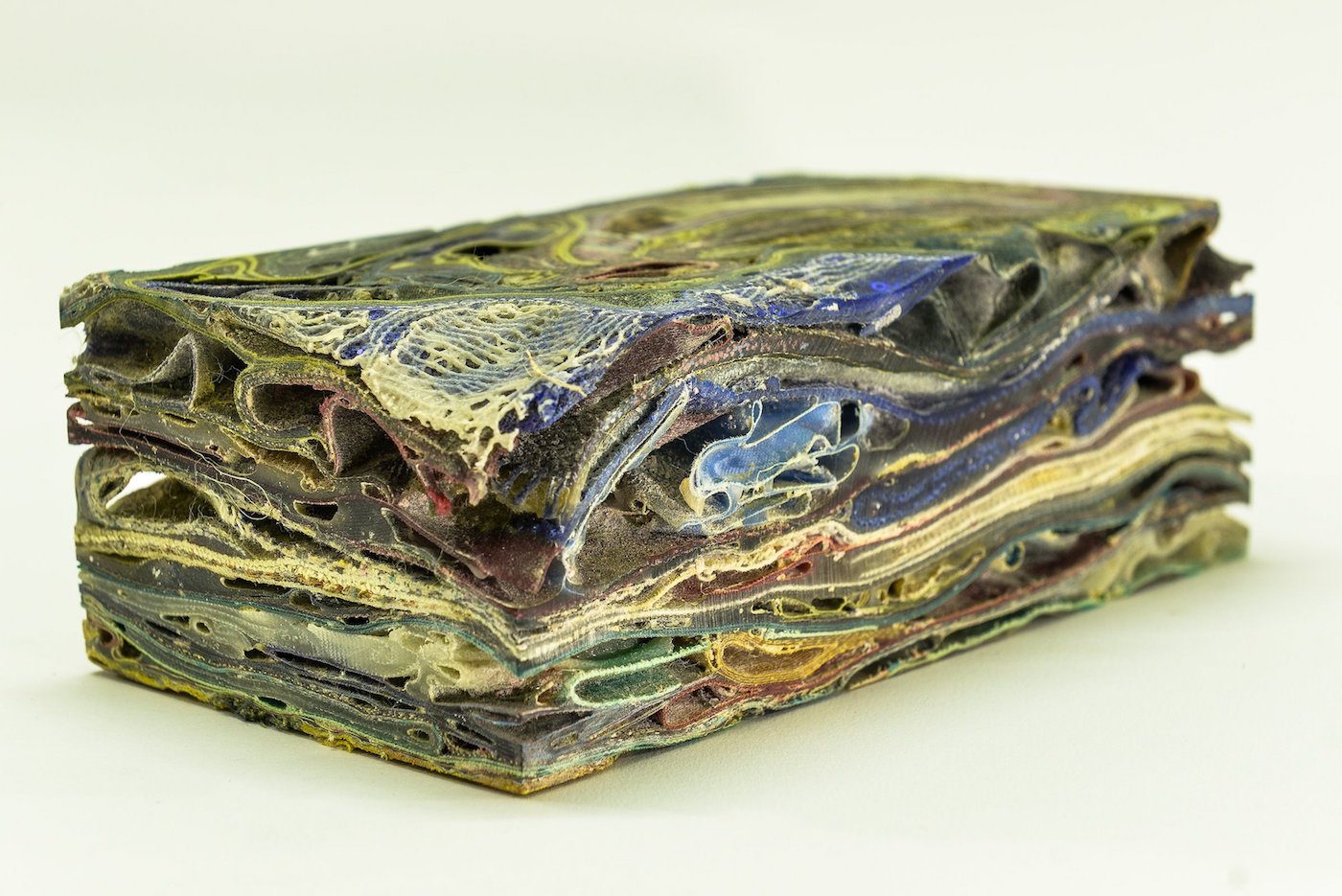 Artist Ibrahim Ahmed draws on cultural and historical similarities and assimilation. Inspired by a very common construction material, the Cairo-based artist created the rectangular sculpture South South (2016–2018). It is a glistening geometric work that resembles a brick and is made of around 100 layers of textiles sourced from the local markets of the “Global South,” pointing at the intricacy of cultural amalgamation. Bianca Baldi performed Versipellis (2018), a lecture in which the white-passing South African artist engages with notions of “passing” (for a specific ethnic identity) – a pertinent question in such a diverse country as Morocco, aptly exemplified in the seminal series Les Marocains by the late photographer Leila Alaoui. 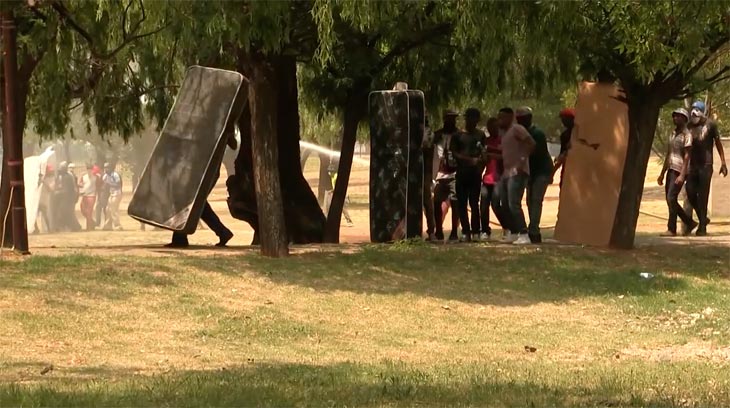 Yet the collaborative project that really sets the biennial apart and lives up to its ambitions is A Maternal Lens, featuring five artists from the Pacific Islands who are mothers. Curated by Ema Tavola, the exhibition takes place at La Coupole, a majestic early-19th-century venue. It explores topics surrounding their lives as mothers, while connecting Casablanca to Aotearoa New Zealand, where they are based. 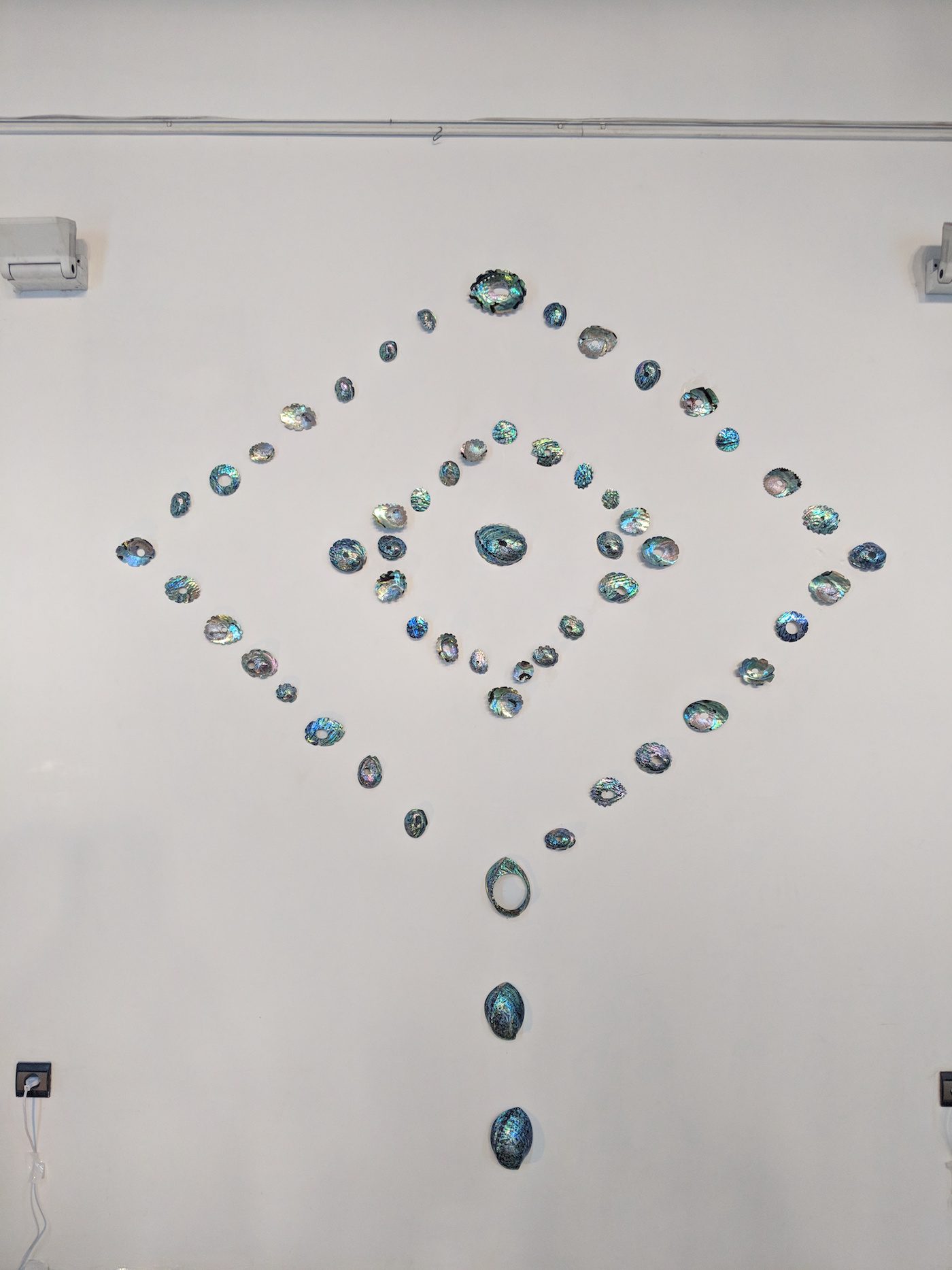 Margaret Aull’s installation of 100 blue paua (abalone) shells on the walls form weaving patterns, creating a constellation that also deals with how the artist represents herself as Maori-Fijian. Entitled Tai Aroha (2018), the work refers to a song about the ideology of love as tidal – fluctuating, deep, and unconditional. Leilani Kake’s enigmatic video reflects on the particularly high rate of child deaths from abuse in New Zealand. Superimposing a starry sky with blinking cat eyes, Mata Ariki (2018), which also means eyes of the gods or little eyes, makes reference to how the deceased become spirits and later stars in Maoridom. Artist Julia Mage’au Gray displays a video featuring bare-chested female dancers performing a traditional dance in Papua New Guinea interweaved with other footage. She also offered free tattoos typical of the Pacific Island nations as part of a performance. The opening pulled a mixed crowd of locals with whom the artists (who sport face tattoos) engaged over the topic of tattooing, which is often seen as discouraged in Islam and is simultaneously indigenous to Morocco.

The exhibition sets a precedent for how to make South-South indigenous connections – for example, Tavola revealed that Eyene was the first non-white curator to invite her to collaborate. In addition, it shows how thorny issues can be discussed without being confrontational, and how to compare similarities without erasing specificity.

Unfortunately, on the opening day BIC also drew attention for reasons beyond the art. Some participating artists showed their discontent with the organization in various forms, including during one of the performances, which, emulating a rave situation in the venue’s main hall, jeopardized the safety of some artworks. As an excuse or in anticipation, Eyene continuously stressed that BIC is not the endpoint but a start – which may culminate during a major Africa-focused exhibition to be organized by France in 2020, and curated by N’Goné Fall who presented the project at BIC.

Mishaps aside, perhaps the life hack of Lubaina Himid (who presented her project Making Histories Visible at BIC) best fits here, especially given the country’s rich culinary tradition: “I embrace failure,” Himid said. “I even take it out to dinner.”

The 4th Casablanca Biennale, Tales from the Water Margins, continues in Casablanca, Morocco, until 2 December 2018