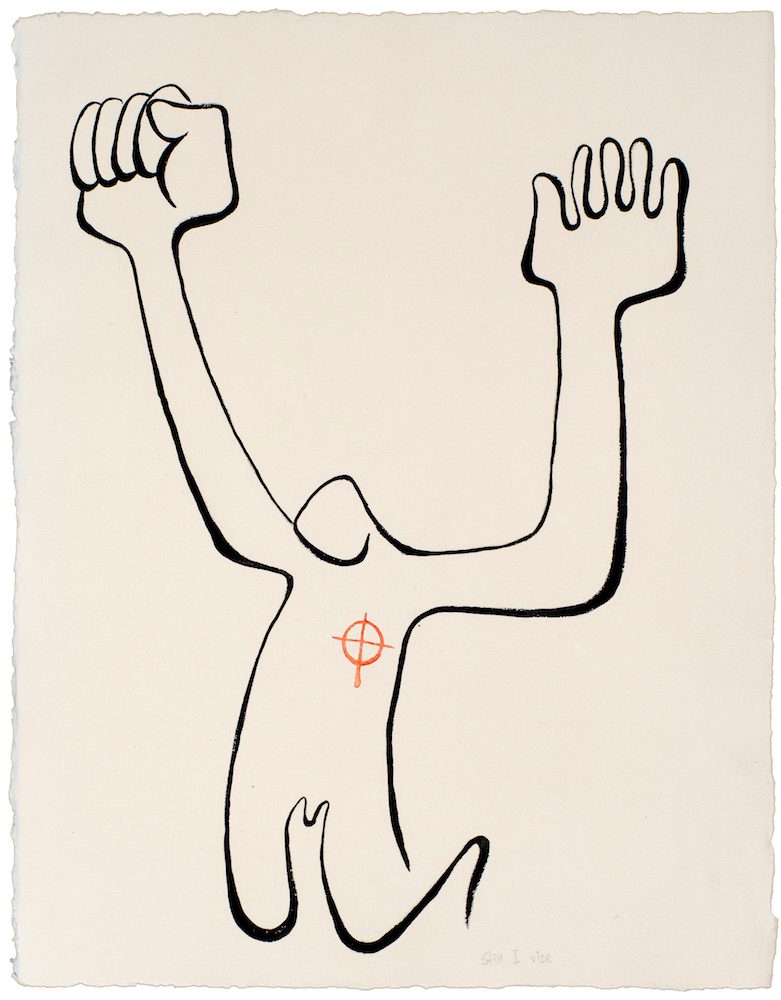 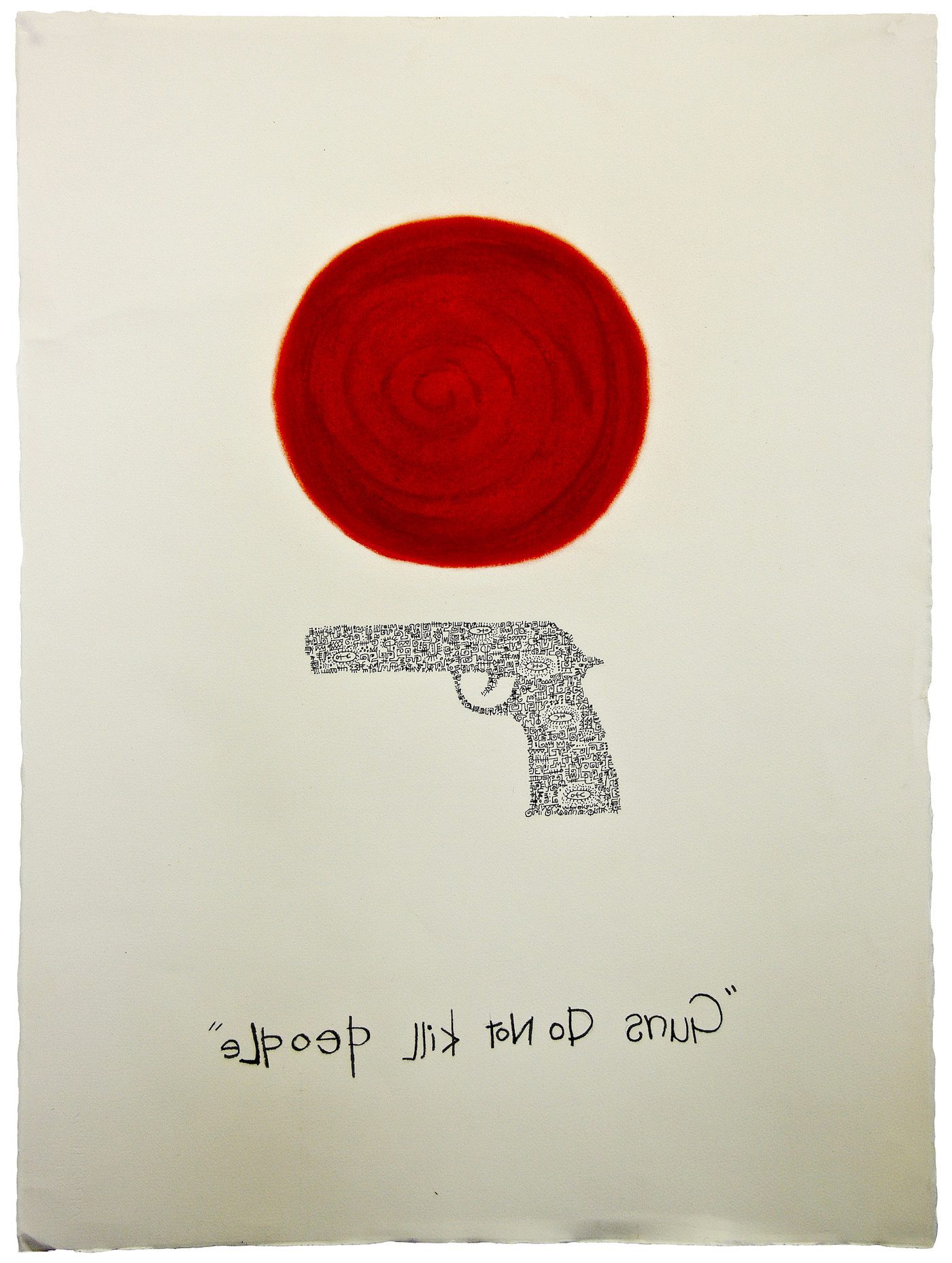 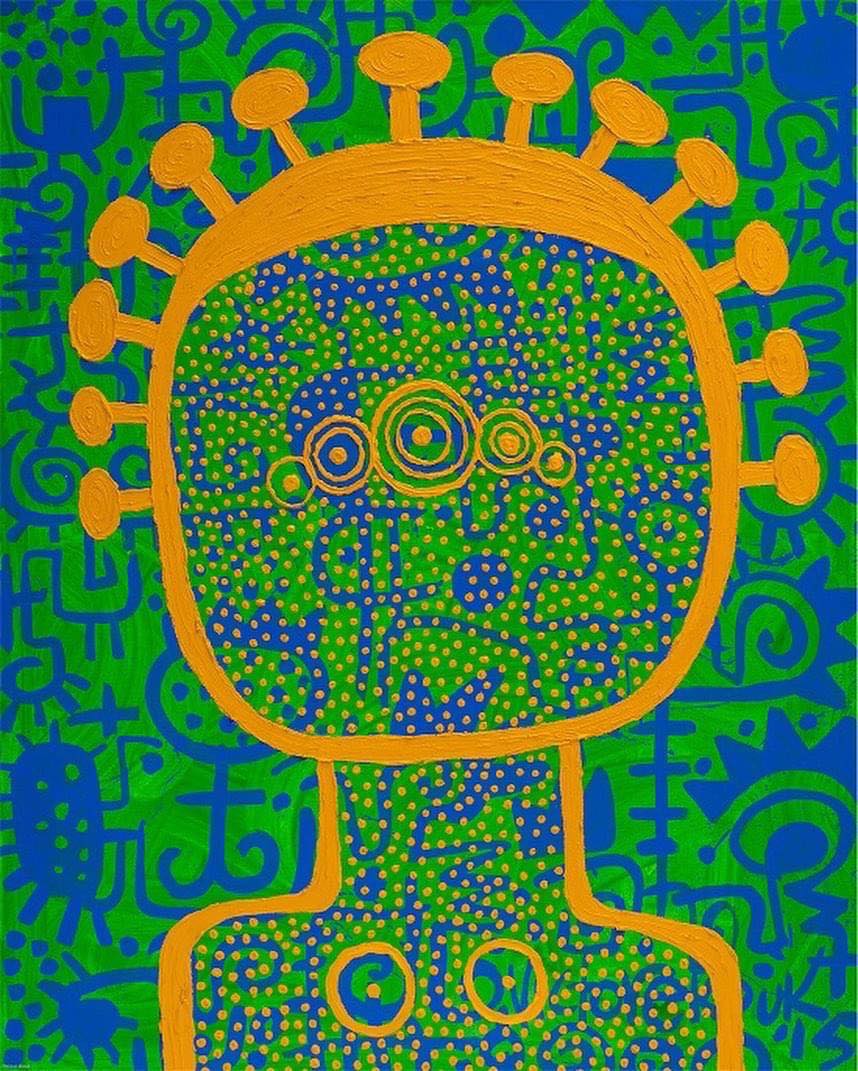 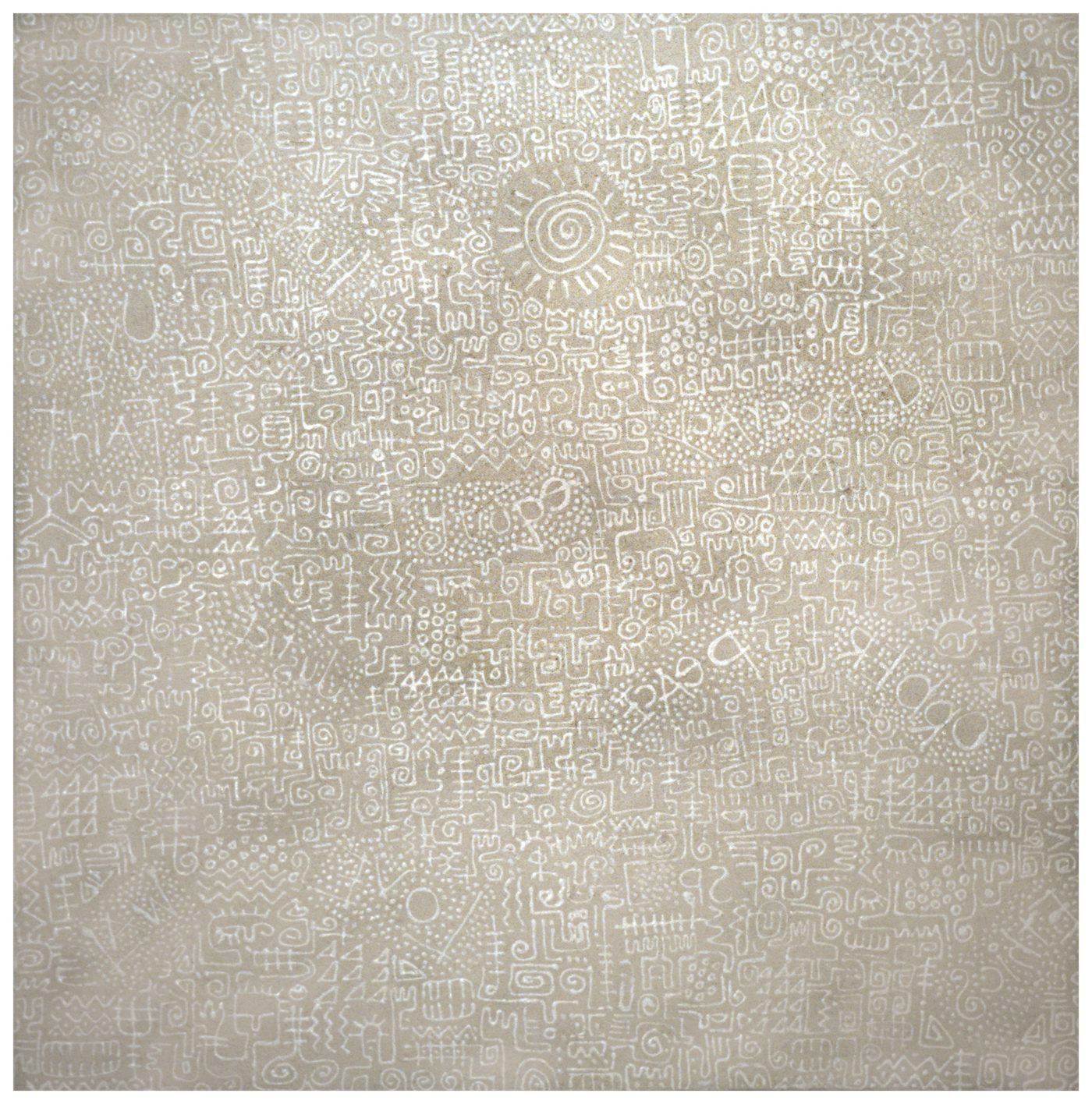 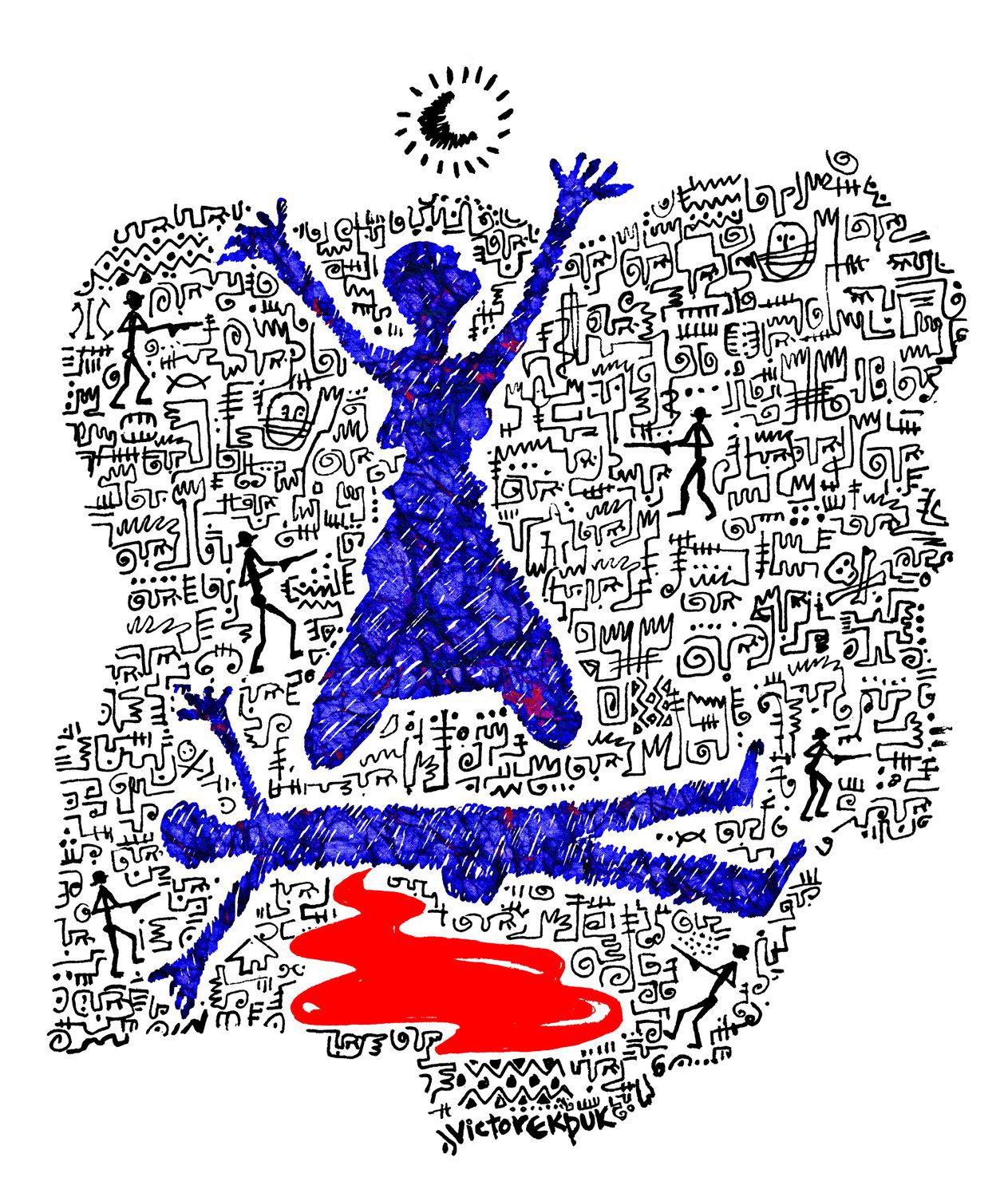 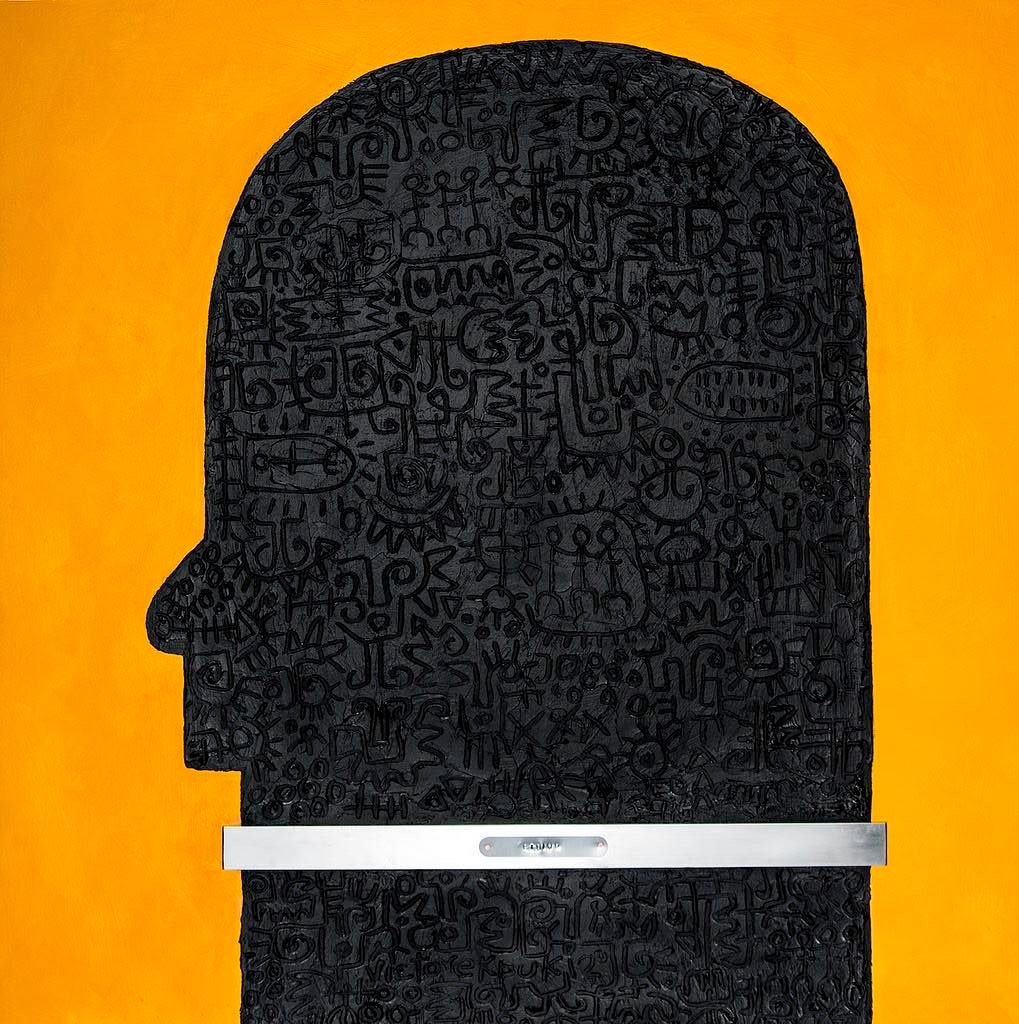 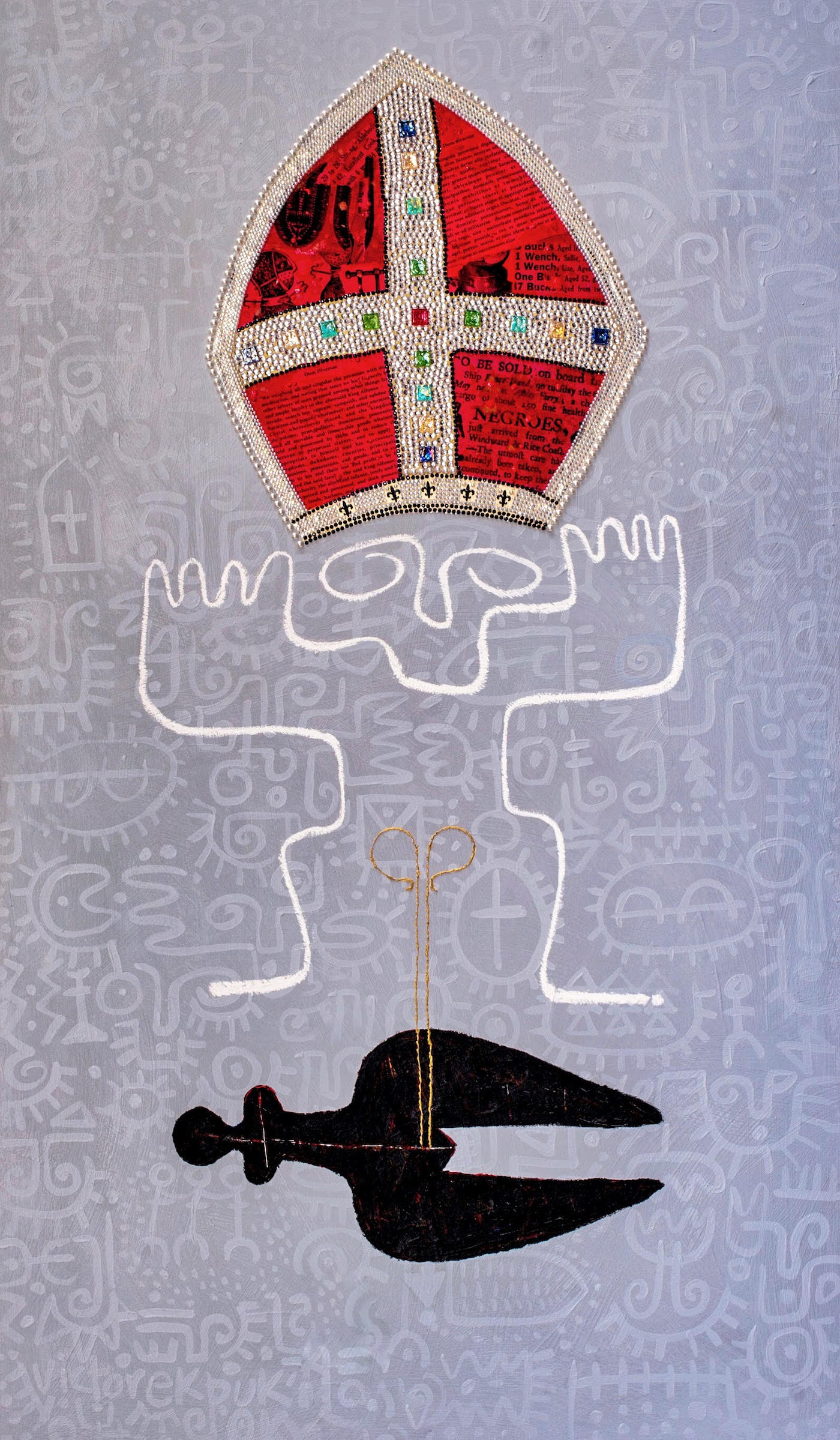 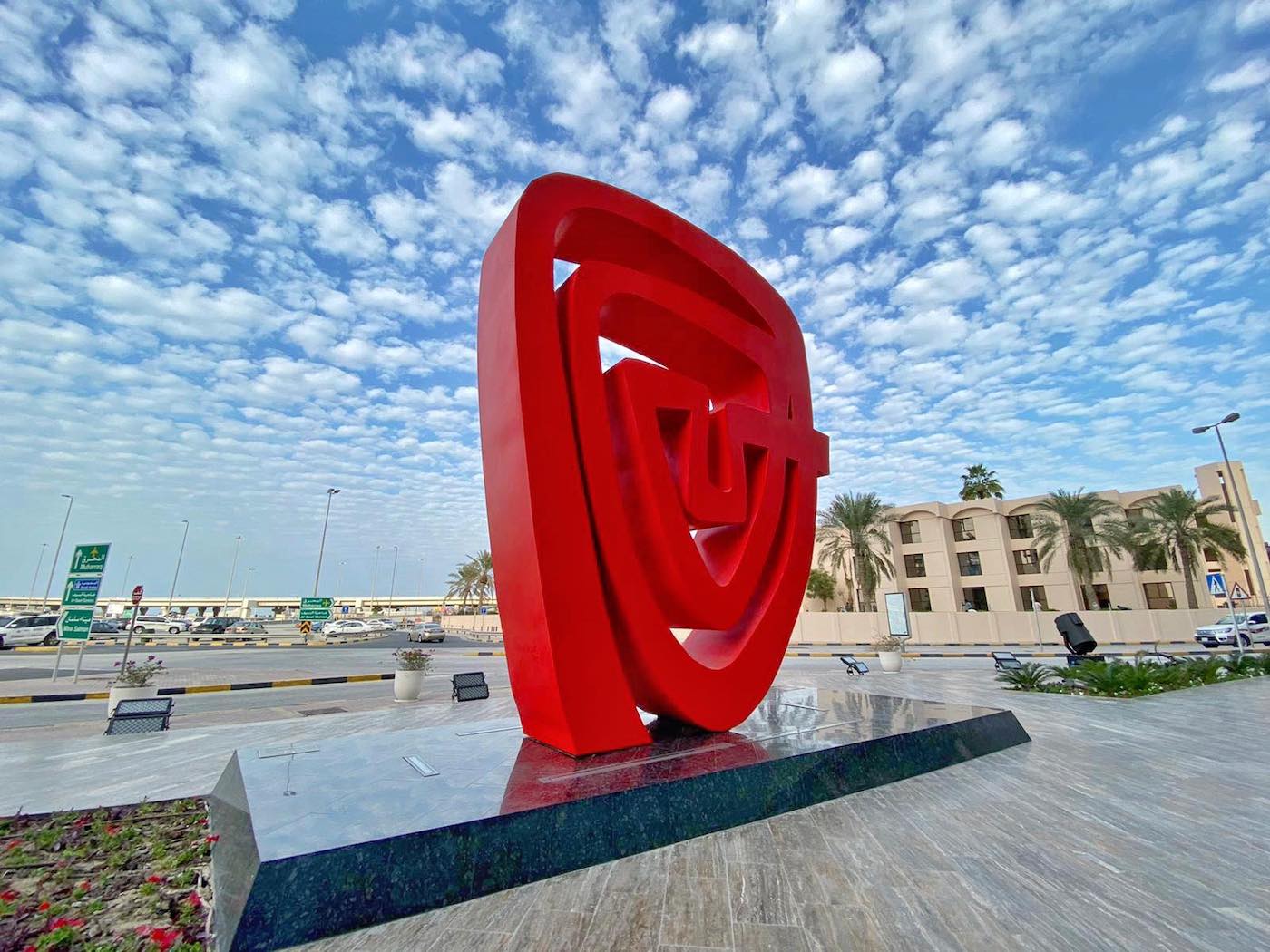 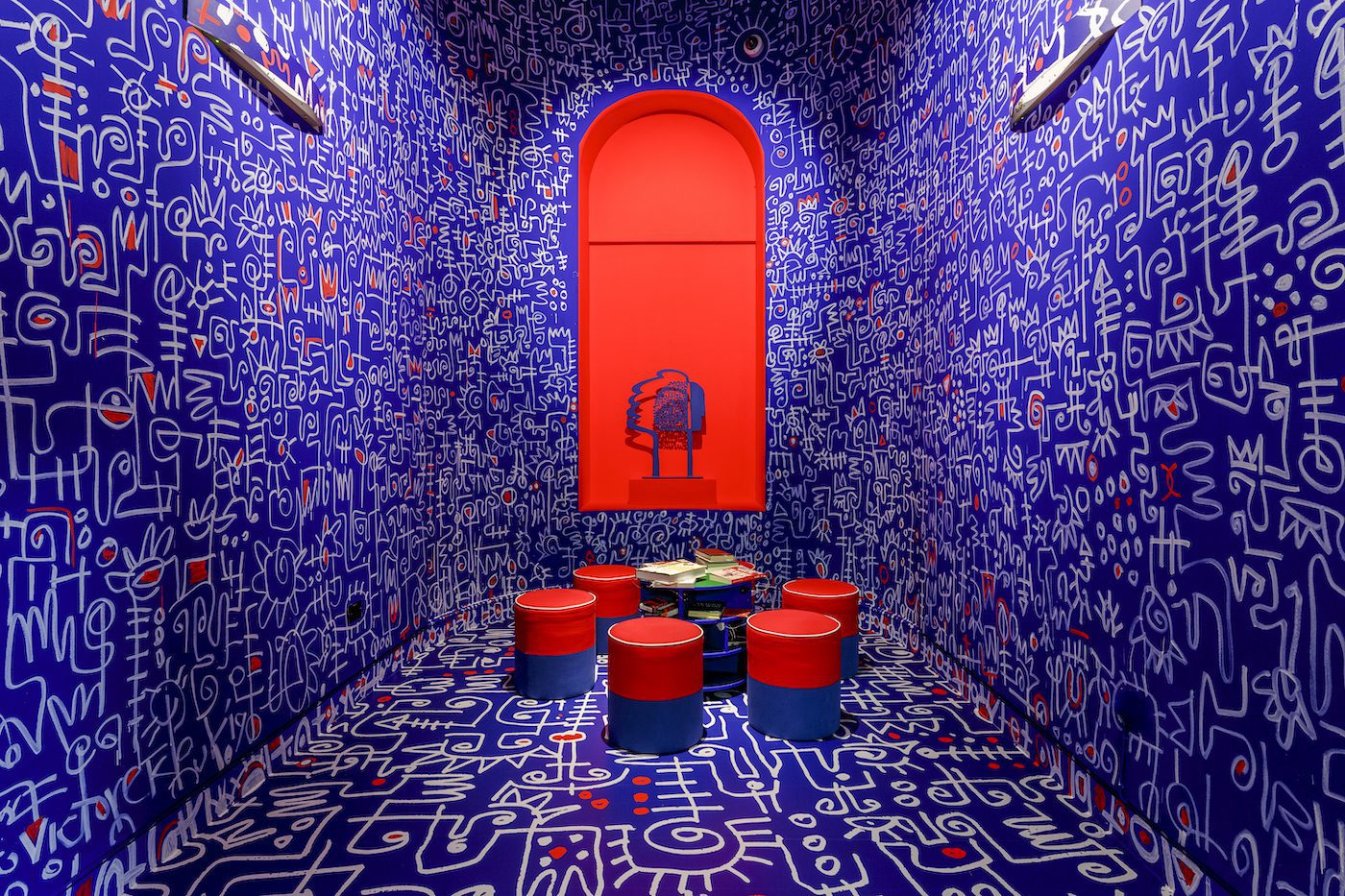 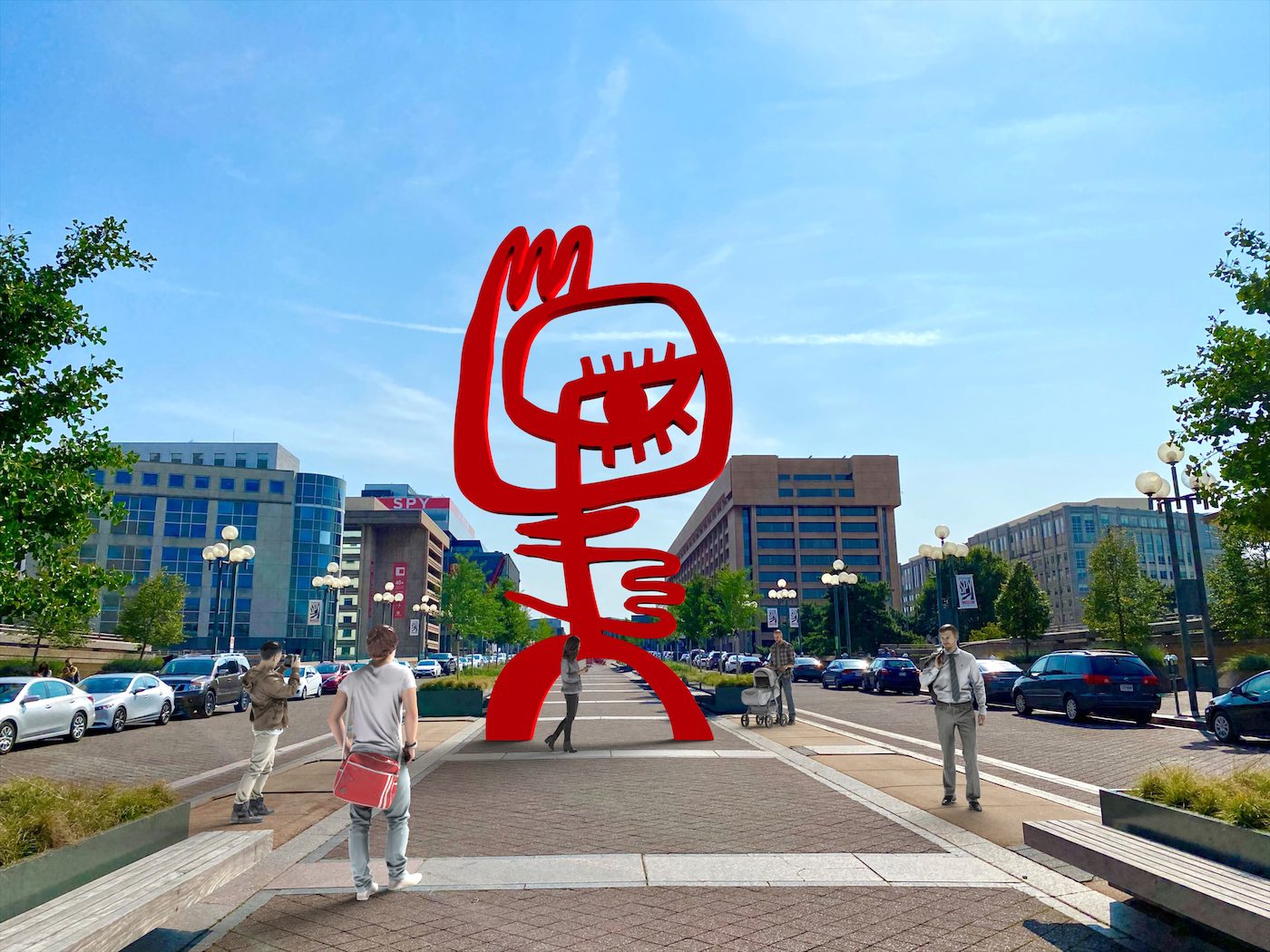 The Washington, D.C.-based artist spoke to Sharon Pendana about his multidisciplinary practice committed to critically illuminating the truths of the human condition.

Victor Ekpuk, Shrine to Wisdom, Installation view at the exhibition Get Up, Stand Up Now at Somerset House from 12 Jun – 15 Sep 2019. Courtesy the artist.

C&: This time last year, you enjoyed international acclaim for your public sculpture The Face in Bahrain and your painting Union of Saint and Venus was acquired by the National Museum of African American History and Culture (NMAAHC) in Washington, D.C. Then COVID-19 hit. How did the quarantine affect your practice?

Victor Ekpuk: It’s true that 2019 was certainly a great year for realizing more of my artistic visions. The immersive projects and large-scale sculptures were fun to do. But in 2020, COVID-19 stalled the momentum, putting scheduled commissions and exhibitions on hold. Even going to my art studio had to stop, so I focused on being productive at home – devoting time to generating ideas for a sculpture portfolio through digital drawings and VR presentations.

C&: While going through your archive during the pandemic, you noticed heads dominating your work. To what do you attribute that recurrence?

VE: The slowed-down period during this pandemic has offered me the time to archive and catalog images of my work over the years. I was struck by how much of my oeuvre dwells on ponderings about the human psyche. From my Portrait series, exploring the sense of self, to the Hip Sista series, examining African women’s body image across the Diaspora, and other stand-alone works, all these compositions centered on the image of the head.

During a 2015 artist residency in Lagos, I created the Head series, directly exploring the concept of the human head as both metaphysical and secular manifestations of our being. Perhaps this is a subliminal effect of an African belief that the head is the seat of human consciousness.

C&: The dominant imagery in the densely layered Union of Saint and Venus alludes to Giulio de’ Medici (later Pope Clement VII) impregnating the enslaved Simonetta da Collevecchio and references the violation of « the Hottentot Venus. » A hoary figure bearing a jeweled papal miter looms over a prostrate Black female body, a pair of croziers, a glided phallus penetrating her. When NMAAHC reopens, the painting will be on view in the wake of Wilton Gregory’s elevation by Pope Francis to the first African American cardinal. What are your thoughts on this coincidental timing?

VE: I am quite honored that NMAAHC chose Union of Saint and Venus from my Slave Narrative series for its permanent collection. This work responds to historical documentation of the Catholic Church’s role in propagating white racial hegemony, starting with the Spanish Inquisition in the 1400s and continuing into eighteenth-century racial theory during the so-called European Age of Enlightenment. Unfortunately, this theory was the basis of white supremacist ideology and was one impetus for evangelism and colonization by Europeans. It is worth noting that the Bible was used to validate slavery in the United States, and the Christian cross has been used as a symbol of hate and racial terror against African Americans. Ironically, the same cross is held up as a symbol of spiritual redemption, even for those who have been tormented and scarified by it. (In Union of Saint and Venus, the tortured body of Venus is scarred by a cross, from her head to her genitals and from one breast to another.)

During Donald Trump’s regime, the sympathetic relationship of white evangelical churches and white supremacy ideology was laid bare for all to see.

It is encouraging that the Catholic Church in the twenty-first century is revising attitudes about race by appointing Wilton Gregory a cardinal. But this great stride of enlightenment should not obscure the history of what people of African descent have had to endure in their interactions with the Church and the cross. Putting the painting on view at NMAAHC at this time is perhaps serendipitous, a reminder of where we’ve been and an insistence on never returning.

C&: From the 1990s as an editorial cartoonist for Nigeria’s Daily Times to today, you’ve shared astute observations on topical themes. How do you respond to the current tumult we find ourselves mired in, from the #EndSARS and #BlackLivesMatter movements to the recent madness at the US Capitol?

VE: My work has continued to explore the human condition by investigating the cultural memories and identities of the African Diaspora. They speak in broader and specific terms to reoccurring issues of human rights abuses and racial violence.

Growing up in Nigeria through several military dictatorships, I didn’t expect respect for my basic human rights, nor that the law would favor people who are not wealthy or politically powerful. In Fela Kuti’s Beast of No Nation, he paraphrases Prime Minister Pieter Willem Botha’s response to protest in South Africa, singing, « This uprising will bring out the beast in us. » In my lifetime, I have experienced that beast and protested that beast in my art on canvas and illustration for newspapers. The Nigerian government’s killing of young Nigerians in response to the peaceful #EndSARS protest was a manifestation of that beast. The killing of George Floyd and response to #BlackLivesMatter peaceful protests was that beast.

When American white supremacists resorted to a violent insurrection in denial of the result of a free and fair democratic vote, it showed that the beast cares nothing about the nation; it cares only for power and will take it by force if necessary. As Fela said, « Dem leave sorrow, tears, and blood, dem regular trademark. »

Sharon Pendana writes about art, culture and travel and is the author and photographer of Secret Washington D.C and the founder of THE TROVE, a deep dive into the lives and work of creatives.