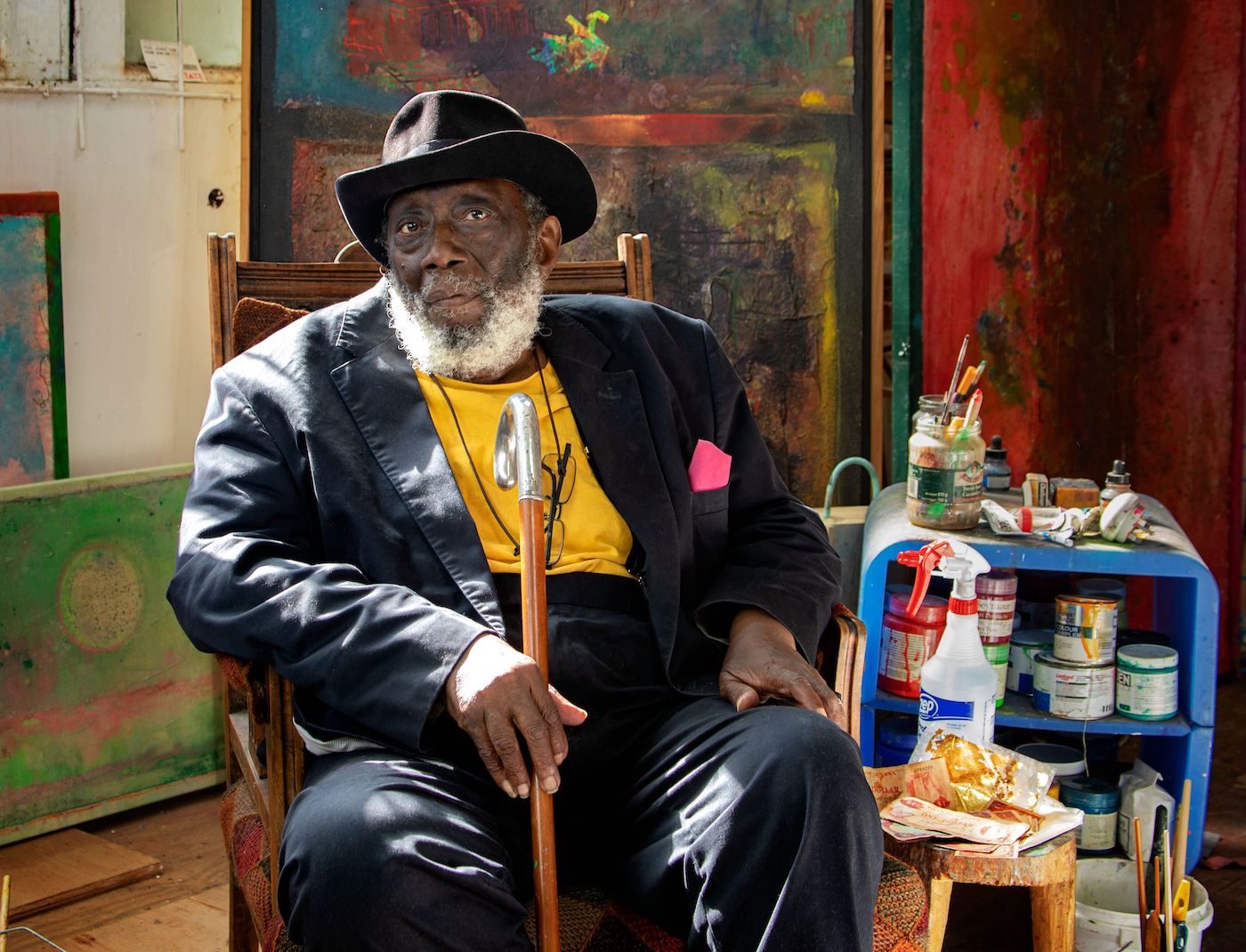 Jury member Zoé Whitley honors the British Guiana artist as "a resolute and uniquely innovative figure in the history of abstract painting".

The decision was made by the jury consisting of Zoé Whitley, director of the Chisenhale Gallery in London, and the board members of the Gesellschaft für Moderne Kunst: Mayen Beckmann (chairwoman), Gabriele Bierbaum, Sabine DuMont Schütte, Yilmaz Dziewior (director of the Museum Ludwig), Jörg Engels (treasurer), and Robert Müller-Grünow.

Guest juror Zoé Whitley stated about the selection of the 2022 Wolfgang Hahn Prize winner: « Frank Bowling’s paintings and critical writings have nothing short of redefined the possibilities of paint for the past six decades. The 2021 Wolfgang Hahn Prize recognises a resolute and uniquely innovative figure in the history of abstract painting. Spanning lived experience in Guyana, Britain and the United States, Bowling’s oeuvre preserves histories in pigment, wax and gel. With peerless chromatic and material sensibilities, Frank Bowling establishes rules for himself in the studio which he invents, adheres to and then disrupts with a subsequent series of utterly new rules and parameters for the picture plane. His is a complex thought process executed on canvas, responding to the long tradition of painting in a consistently dynamic manner. »

Thanks to the artist’s generosity, the 2022 Wolfgang Hahn Prize will mark the first acquisition of one of his works for a public collection in Germany. The title of Bowling’s painting Flogging the Dead Donkey (2020) is a wry statement about monochrome paintings: it’s been done over and over again, like flogging a dead donkey. And yet the title is ironic because in this and other works, Bowling has taken painting in a new direction. He encountered the practice of monochrome painting during his early years in New York starting in 1966, when he engaged with the works of Ad Reinhardt, Barnett Newman, Clyfford Still, Marcia Hafif, and Mark Rothko, all of whom experimented with monochrome painting and its variants. The overall composition of Bowling’s painting is an homage to earlier generations of colorists. The complexity of the surface textures and the extraordinary intensity of the red tones as well as the subtle flashes of other colors and remnants of gold pigments are inimitable. This late work, which illustrates Bowling’s continuing engagement with color and geometry, gives life to his maxim that “the possibilities of color are infinite.”

“The artist is being recognized for his work in the latter part of a long career and at the beginning of his status as a classic in art history. Frank Bowling creates unique abstract paintings that subversively resist clear interpretations in their thematic and material complexity. With the acquisition for the Wolfgang Hahn Prize, the Museum Ludwig will be the first public collection in Germany to obtain one of Bowling’s paintings, thus opening up the possibility of a deeper reception of his oeuvre. We are very grateful to Frank Bowling for his generosity,” says Mayen Beckmann, chairwoman of the Gesellschaft für Moderne Kunst.
Yilmaz Dziewior, director of the Museum Ludwig: “Since 2017, when I saw Frank Bowling’s exhibition Mappa Mundi at Haus der Kunst, I hoped to acquire one of his works for the collection of the Museum Ludwig. After all, a work like Flogging the Dead Donkey (2020), in which the spirit of American color field painting and British abstraction combine to form an incomparable, very independent position, represented a gap in our important and multifaceted collection of abstract tendencies. I’m delighted that we can now help bring Frank Bowling’s work the attention it deserves in Germany.”

Frank Bowling (*1934 in Bartica, Guyana) lives and works in London. He graduated from the Royal College of Art in 1962. As an artist and contributing editor for Arts Magazine in New York from 1969 to 1972, he made an early and significant contribution to debates on African-American art. Bowling was appointed Royal Academician in the United Kingdom in 2005 and was awarded the Order of the British Empire in 2008 for his services to the arts. In 2020, he was awarded a knighthood in Queen’s birthday honours.

Bowling’s work is represented in over fifty collections around the world, including the Menil Collection in Houston, the Metropolitan Museum of Art in New York, and Tate Britain in London. His art has been featured in many exhibitions, including solo exhibitions at the Whitney Museum of American Art in New York in 1971 and the Serpentine Gallery in 1986 as well as in the extensive solo exhibition Mappa Mundi (2017–2019) at Haus der Kunst in Munich, the Irish Museum of Modern Art in Dublin, and the Sharjah Art Foundation. Tate Britain in London hosted a comprehensive retrospective of his work in 2019.

The Wolfgang Hahn Prize is awarded annually by the Gesellschaft für Moderne Kunst am Museum Ludwig, and is being presented in 2021 for the twenty-seventh time. The award is primarily intended to recognize contemporary artists who have already made a name for themselves in the art world through their internationally recognized oeuvre, but who are not as well known in Germany as they deserve to be. The prize money of a maximum of 100,000 euros comes from contributions by the members and is used to acquire a work or series of works by the artist for the collection of the Museum Ludwig. The prize includes an exhibition organized by the Museum Ludwig with an acquired work by the prize winner as well as an accompanying publication.

The name of the award honors the memory of the passionate Cologne collector and painting restorer Wolfgang Hahn (1924–1987), who was involved in various ways with the art of the European and American avant-garde in Cologne. The Gesellschaft für Moderne Kunst is indebted to his exemplary work as a collector, a founding member of the Gesellschaft für Moderne Kunst, and the head of the restoration workshops at the Wallraf Richartz Museum and the Museum Ludwig.

The previous recipients are among others Betye Saar (2020), Kerry James Marshall (2014).