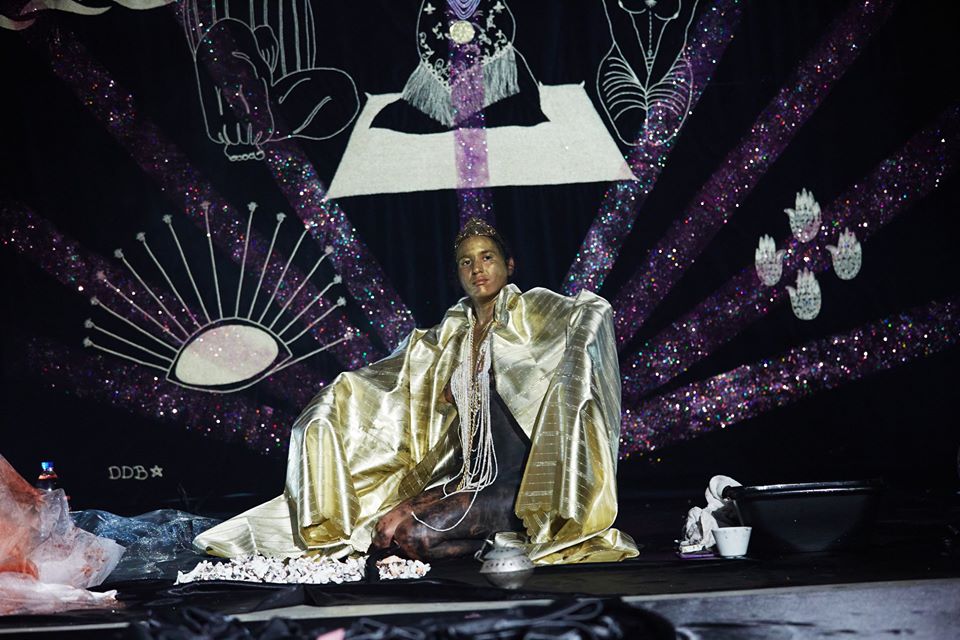 Algerian artist Dalila Dalléas Bouzar has been awarded the SAM Prize 2021, that includes an exhibition at Palais de Tokyo in 2022.

Thanks to SAM Prize, Dalila Dalléas Bouzar will carry out her ambitious project of creating an embroidered black velvet tapestry of 30 m long and 3 m wide. The designs of the tapestry will be inspired by the engravings and cave paintings of the Tassili desert in Algeria. By the means of SAM Prize, this project will be presented in an exhibition at the Palais de Tokyo taking the form of an immersive installation in which the public will be able to live a collective experience. The installation will aim to recreate an ersatz nomadic tent whose three walls will be made from the tapestry.

In order to live a collective experience conducive to exchange, contemplation, rest and reverie, everyone will be invited to bring their own blanket to inhabit, sit on, lie on amongst other all.

The blanket is an important object to the Algerian culture, particularly as it is an essential element of the bride’s dowry. Beyond Algeria, the blanket is a transversal element in many cultures around the world, symbolising nomadism, protection, travel and the body.

Dalila Dalléas Bouzar has always been a draughtswoman. She first trained in biology before discovering painting during a workshop in Berlin. Having become a permanent challenge for her, she enrolled at the Beaux-Arts de Paris to perfect this practice which became her preferred medium.

His figurative style, at the crossroads of realism and fantasy, rejects the authority of a too sharp drawing in favour of an unlimited experimentation of colours and a contrasting treatment of light. From the political to the historical, from the biological to the psychological, his work questions on several levels the powers of pictorial representation, against all expressionist or illustrative tendencies. His obsession with painting bodies and faces (his own as well as those of others) reflects his desire to consider the portrait as a means of identity investigation or critical expression of relationships of domination, whether patriarchy or colonialism.

Particularly sensitive to violence against bodies, she considers painting as a means of preserving, regenerating or reinventing their integrity. Her practice has broadened to performance and then textile art, two means of experiencing the body in ritual form and collective creation.

Born in Oran, of Algerian parents, she draws from her double culture other relationships to the image, the object and the sacred, attentive to the cultural dissonance she creates as well as to the hegemony of Western representations in the history of art. She identifies above all with African women and their traditions and draws from Algerian memory the forms of a history of violence to which her work responds.

From image to body, between the forces of the cosmos and the powers of the spirit, Dalila Dalléas Bouzar thus gives visibility, a luminous presence, to these wounded identities in order to better pay homage to their power. » * Florian Gaité

Every year, SAM Art Projects awards a prize to a visual artist residing in France and presenting a project destined for a foreign country (non-European or North American). Applications are open every year from June to September. The SAM Prize is attributed in December, after the committee deliberations, to a french artist (or a foreigner currently living in France) who works in the visual arts domain.

The artworks produced in the framework of the SAM Prize allow artists to raise issues and to present discoveries and research in less-known areas. Exhibiting them at the Palais de Tokyo confirms their notoriety amongst professionals from the art world and the public.

The SAM Prize is endowed with 20,000 euros and accompanied by an exhibition at the Palais de Tokyo in Paris.

Established in 2009 and supported by the patronage of Sandra Hegedüs, SAM Art Projects’ aim is as much to help, promote and defend the work of contemporary artists from non-western countries as to support the projects of French artists living or working in foreign countries (non-European or North American). By accompanying artists and, through them, institutions, SAM Art Projects therefore aims to encourage artistic exchanges and to create cultural links between Europe and non-western countries. Its action is articulated around a contemporary art prize, assigned each year, as well as around an artistic residency. Both axes lead to regular exhibitions at the Palais de Tokyo, in Paris.

This project of private philanthropy has a strong international dimension and its main aim is to promote artistic exchanges between North and South, East and West, outside of the traditional centres of the art market. Support to production and artists visibility are at the heart of SAM Art Projects’ commitment.

The project’s organization and action also put Paris back at the centre of artistic dialogue and exchanges, reviving the image of France as an important pole of international creation, constantly welcoming artists from all around the world.