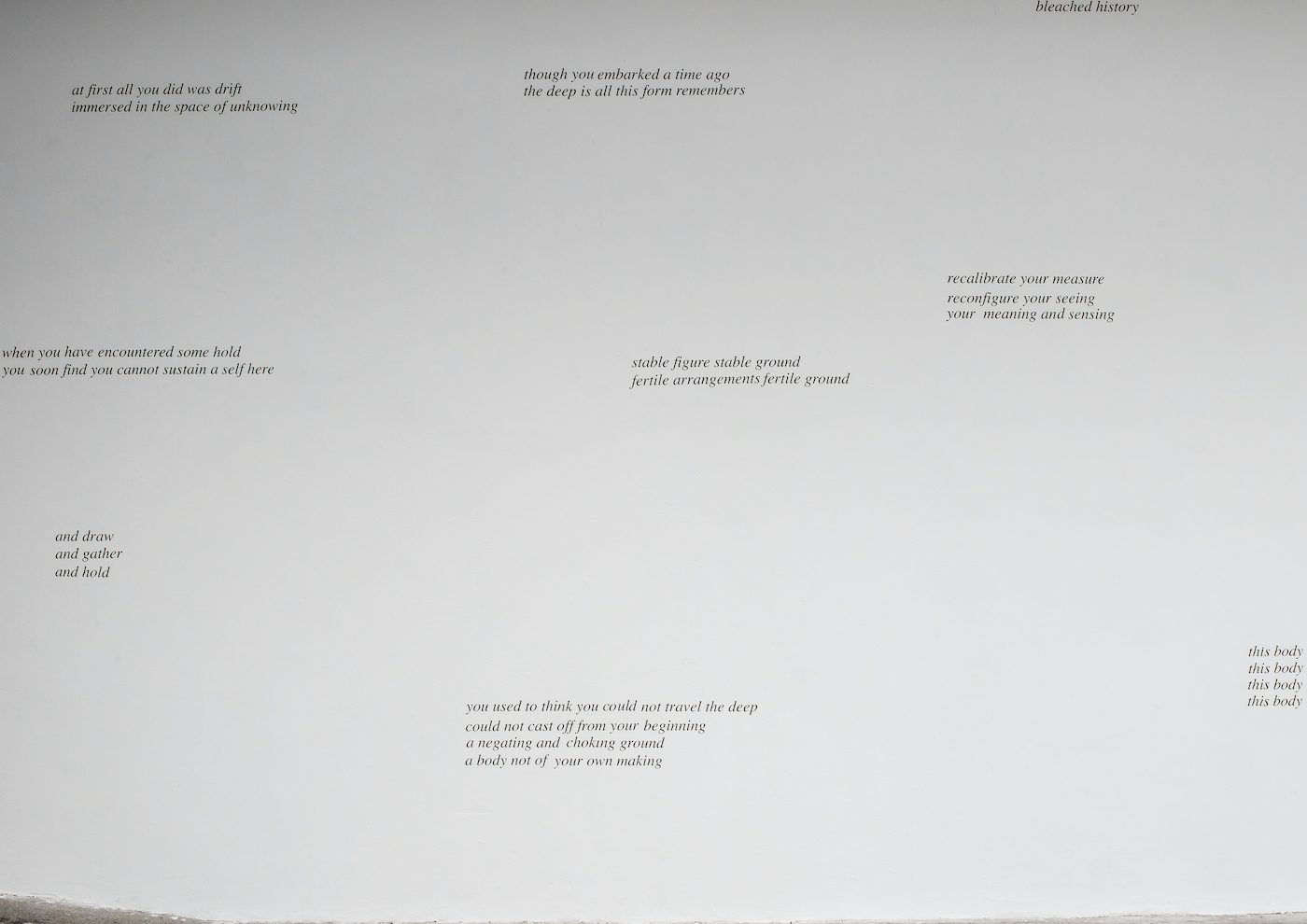 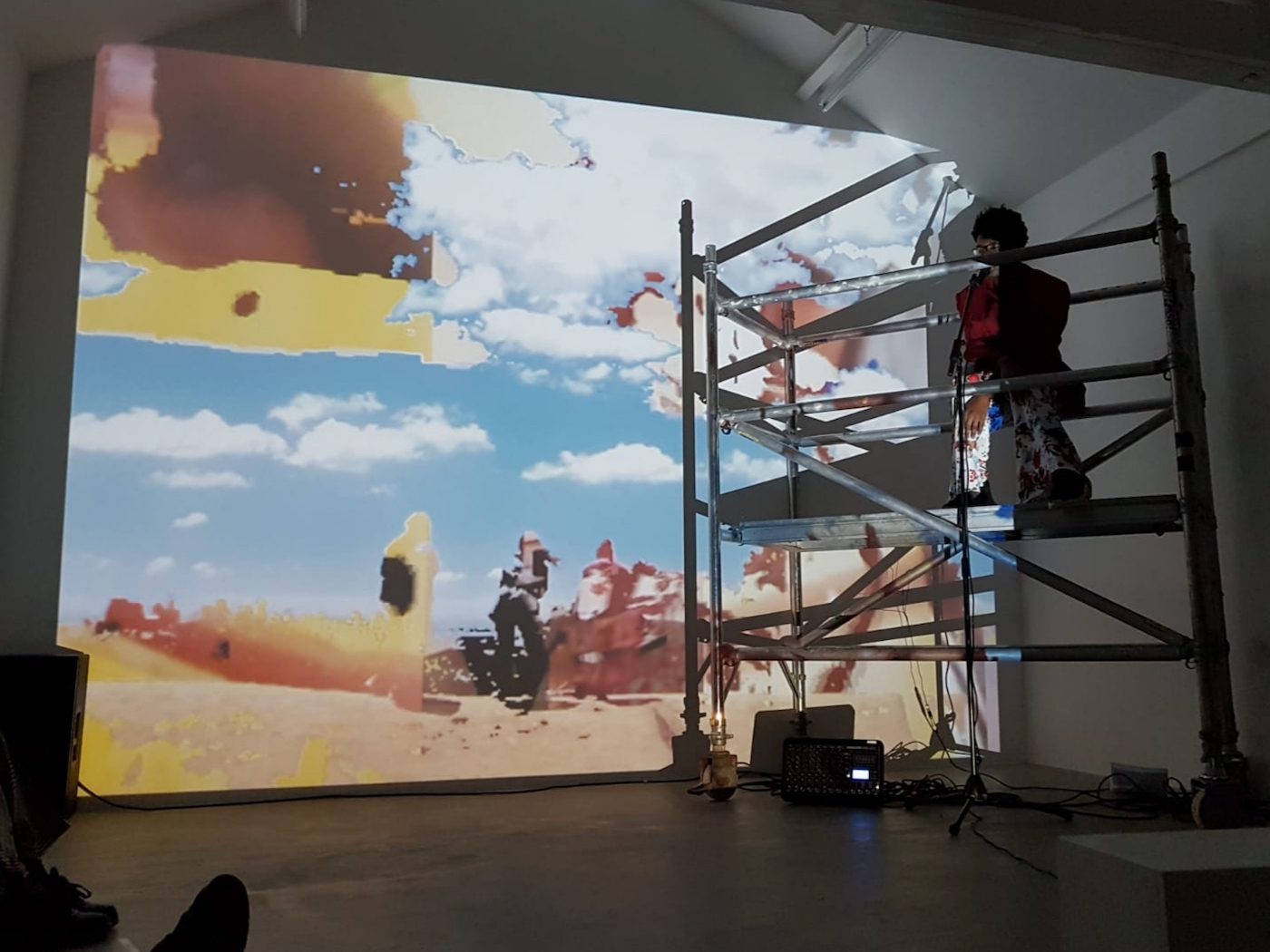 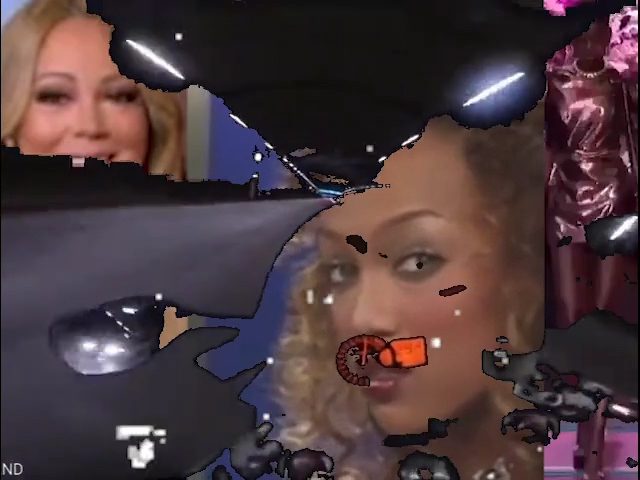 Ebun A. Sodipo, although it may seem absurd, the earth also moves, Performance. Courtesy of the artist.
3/3
3/3

In Conversation with Ebun A. Sodipo

Resisting theoretical power structures via fragmented text, Ebun A. Sodipo’s work provides intimate encounters in which to think about gender and race. The London-based visual artist and poet questions established historical narratives, as well as perceptions of what is seen as normal, while sensitively opening spaces to speak about trauma and pain. In the summer of 2019 Sodipo participated in BBZ BLK BK: Alternative Graduate Show, co-curated by Deborah Holman at Copeland Gallery in Peckham, south London, with a wall text piece. For C&, Mearg Negusse took the chance to speak to Sodipo about fragmentation as practice, the layering process in their video collages, and the shift within their work from creating physical spaces towards knowledge production.

Ebun A. Sodipo, although it may seem absurd, the earth also moves, Performance. Courtesy of the artist.

C&: In your writings, short videos, and collages, poetry is a recurring element. How does it provide you with a tool to speak about subjects like Blackness or queerness?

Ebun A. Sodipo: I write poetry because it’s easier to speak about myself through poetry, or fragmented prose. It is easier for me to convey emotions and affective states through poetry, and easier to avoid the authoritative tone I encounter in a lot of theory. The fragmented nature of Blackness, of building a self. I try to avoid seeming didactic, probably a residue from art school. I’m trying to get across the psychic affect of Blackness and queerness, as things that are felt first, before they are known.

Poetry is useful in speaking about abstract subjects, and further abstracting them. Poetry allows me to speak obliquely about trauma and pain, while withholding the entirety. Consuming the trauma of the marginalized lends itself to the production of pleasure – as modern subjects I think we are formed to consume and enjoy that trauma on some level. But because my work is in part a telling of my traumas and anxieties, particularly as a Black, trans body, poetry is a way for me to resist giving everything away, to fragment in order to protect my integrity, to fragment in order to survive while still constructing something that feels, or causes a feeling of calm.

Poetry allows me to take a particular tone, and to construct a series of elements that produce an emotional as opposed to conceptual response. I want my work to produce a movement in the emotional core of the body.

C&: In your work you revisit and challenge societal concepts of what “normal” is. In relation to this, could you describe your process of creating your own (visual) language?

EAS: As I said, poetry is important for me in communicating in fragments, of talking about the fragmentation of subjectivity, the barely held-togetherness of identities. It’s a way to convey affect. The way in which I produce work relates to poetry, as a breaking down of a previous whole.

I consider my films to be video collages. Most of the clips I use are obtained from Tumblr, from the Black users I follow, the rest are from other online social networks I use. I usually set a day aside every month to download every new item in my archive. To make a film I chuck all the clips into Premiere Pro and start the process of piecing together narratives, of affects, of thoughts. I cut down clips, layer them on top of each other. I translate my thoughts and feelings and obsessions into visual format. I rework a live archive to speak in a particular manner.

I think a lot about how the layering of history, of epistemes, is produced by ideologies, particular ways of seeing. I want to highlight the frame. So I show image upon image upon image, sound on sound on sound, positioning each clip so the viewer is hyper-aware of its boundaries and those of the image it lies on top of or behind. I play with these layers of images. Cutting away the superficial to reveal inner workings informs how I arrange the clips and what effects I use to produce this cutting away.

I’m critical of the desire and need for art to have a finished look, a sleekness that lends itself to the commodification and financialization of the art object, a finish that acts like a polished surface. As an artist I feel a pressure to produce iArt. While hypermodern sleekness has its place, and artists have different reasons to produce it, my work attempts to highlight a messy, contingent, experimental process of self-making with undefinable edges. I like my work to be visually appealing and considered while also messy. This is also why I prefer to work with poor images as opposed to lush HD footage.

Ebun A. Sodipo. Courtesy of the artist.

C&: As part of the Black House you have also worked collectively. How does this differ from the work you create on your own?

EAS: The Black House was a collaborative project with two other artists, Heidi Sincuba and Kefiloe Siwisa, both of whom now live and work in South Africa. We came together as Black students of different London universities who had experienced the alienation that is familiar to many Black students attending or working in a European institution. In 2017, we took over Pempeople, a space in Peckham, for a week and opened a cafe that showcased Black artists, screened films, put on a panel discussion and an open discussion, and invited musicians, poets, and sound artists to deliver works and readings in the space. Looking back on it, we achieved a lot with barely any money, we built a little community that still lasts today. Since then, I’ve worked with Rosa-Johan Uddoh and Danielle Brathwaite Shirley on a recurring performance called Atlantic Cruises, where we travel across the Atlantic following the notorious triangular trade route that instituted this modern world, conversing with each other about queerness, the archive, knowledge, and Blackness.

Although both are motivated by the same things, a desire to transform and create spaces for the flourishing of Black thought in the UK, what I produce now, 2 years later, is different to what I was producing then. I think the work I create now intervenes in the libidinal economy, and in the production of knowledge and history, as opposed to trying to establish physical spaces, while also thinking about and responding to the space and frame of “fine art,” which is ultimately violent and exploitative.

The work I produced with the Black House was much more focussed on the community than my present work, which is more about myself and the events, processes, and affects that form my particular subjectivities and identities.

Ebun A. Sodipo is currently taking part in the group exhibition away, completely: denigrate at Narrative Projects, London, UK, until 1 February 2020.