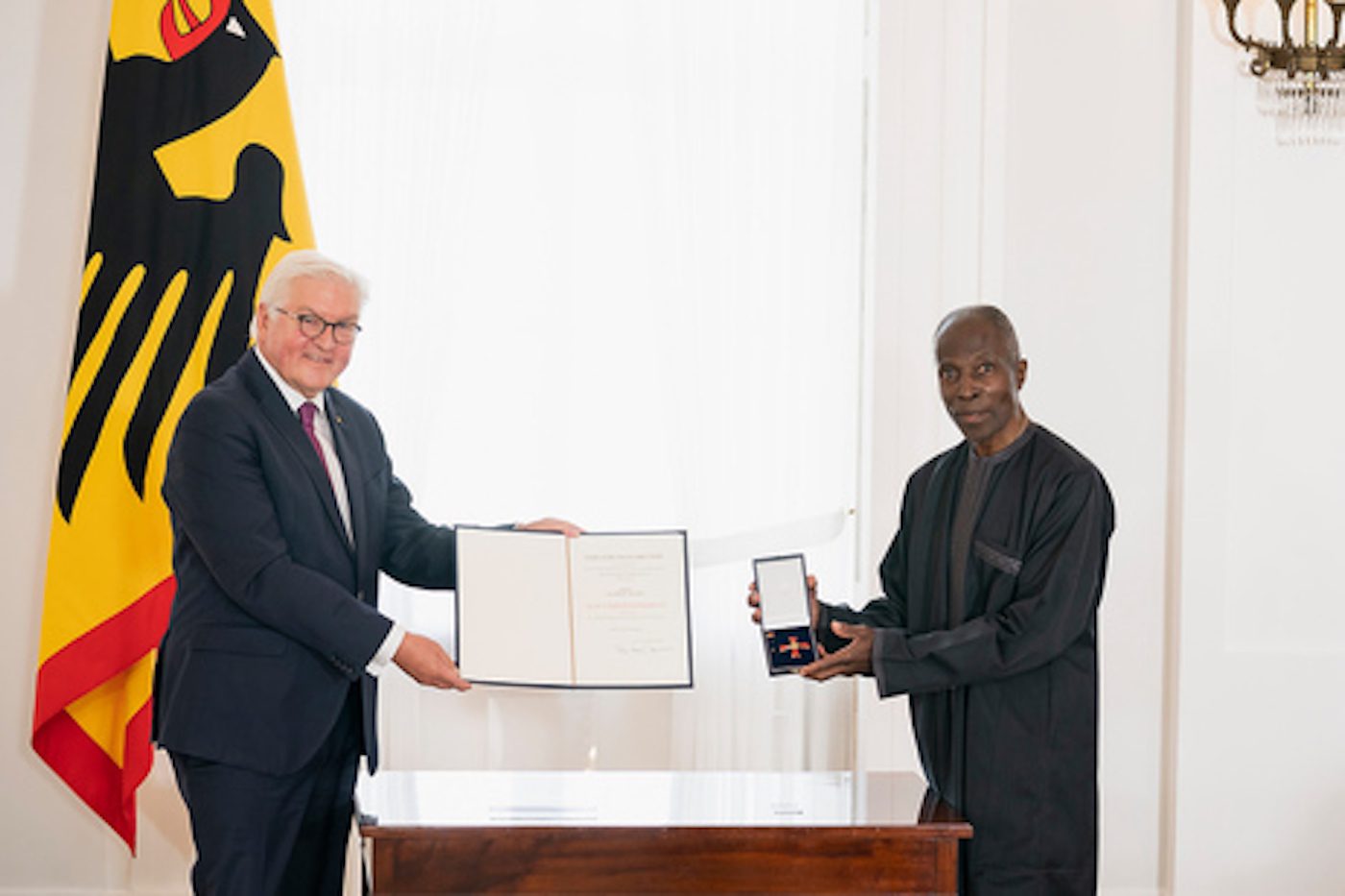 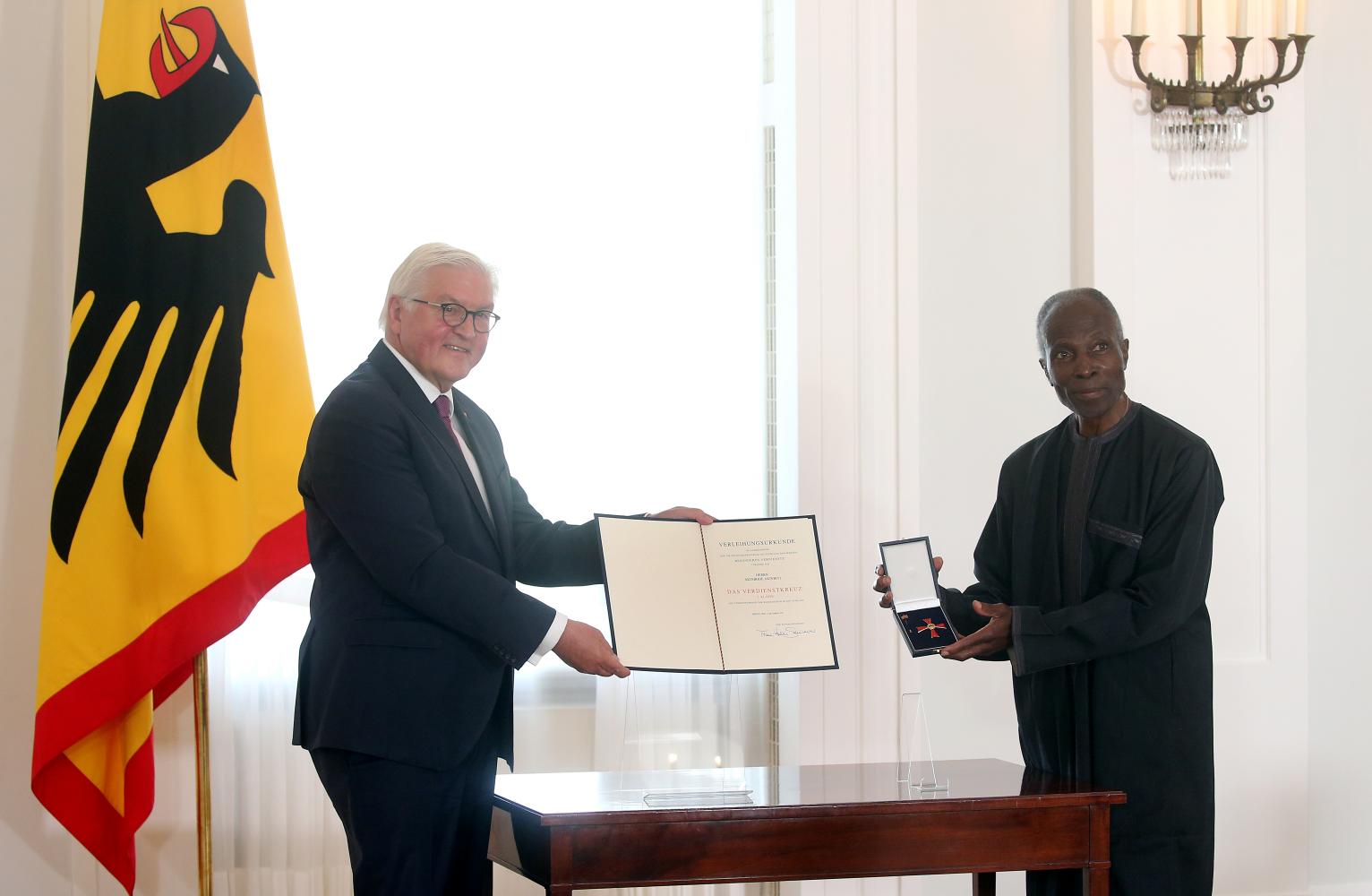 On the occasion of the Day of German Unity, Berlin-based artist Akinbode Akinbiyi has been awarded with the Order of Merit of Germany for his very own visual language.

British-Nigerian artist Akinbode Akinbiyi, who lives since the early 1990s in Berlin, has been awarded on the occasion of « Tag der Deutsche Einheit » (Day of German Unit) with the Order of Merit of the Federal Republic of Germany.

« No part of the world can go forward without the other parts. In times of pandemics, we are all more aware of this than ever. And this specific, whole world is shown to us by the photographer, author and curator Akinbode Akinbiyi with his very own visual language. He describes himself as a « conscious wanderer » who observes cultural and social developments around the world. To this day he still photographs in traditional analogue technology and in strict black and white. His motifs often come from everyday life in big cities all over the world. Akinbode Akinbiyi shows us realities far from clichés, opens up new perspectives on apparently unspectacular situations or areas and thus provides food for thought. His works encourage a lively engagement with the African world… »

Akinbiyi’s work has been shown at exhibitions and biennials in Frankfurt, Berlin, Dresden, Weimar, Tokyo, Paris, Philadelphia, Johannesburg and Havana, and published in various magazines. In addition, he was curator of various exhibitions of the Institute for Foreign Cultural Relations, including « STADTanSICHTEN Lagos » (2004) and « Spot on … DAK’ART – The 8th Biennial of Contemporary African Art » (2009). In Bamako, Mali, he curated the German contribution to the « Rencontres de Bamako – Biennale de la Photographie Africaine » (2003). Akinbiyi regularly writes catalog texts for exhibitions he is in charge of and in 2014 participated as co-author in the book project « Just Ask! » about the contemporary African photography scene (2014, edited by Simon Njami). In cooperation with the Goethe-Institut in Nigeria, he founded an art center that is now part of a network of African photography schools. In 2016, he was awarded the Goethe Medal. In 2017, as part of documenta 14, he exhibited his work Passageways, Involuntary Narratives, and the Sound of Crowded Spaces (2015-2017) in Athens and Kassel. At the Berlin art space SAVVY Contemporary, he presented an extensive body of work in the group exhibition THAT, AROUND WHICH THE UNIVERSE REVOLVES: On Rhythmanalysis of Memory,Times, Bodies in Space. Akinbode Akinbiyi lived temporarily in Munich after his studies and has lived in Berlin since the early 1990s.

With a special look at the cultural life in Germany, Federal President Frank-Walter Steinmeier awarded 14 citizens the Order of Merit of the Federal Republic of Germany on October 1st on the Day of German Unity. The six women and eight men have stood up in an outstanding way for art and the cultural life particularly affected by the Corona restrictions. With their extraordinary merits, they promote solidarity and social cohesion. Artist Hito Steyerl should also have received an award, but she declined with an open letter and justified her move with the government’s handling of cultural workers during the pandemic.