A New Home for The Studio Museum in Harlem

The museum unveils the design for the 82,000-square-foot building and announced the historic groundbreaking for the new building for fall 2018

Thelma Golden, Director and Chief Curator of The Studio Museum in Harlem, and Raymond J. McGuire, Chairman of the Board of Trustees,  announced that the historic groundbreaking for the Museum’s new building, designed by Adjaye Associates in collaboration with Cooper Robertson, will take place during the 50th anniversary year of 2018.

The completion of design development and the success of the quiet phase of the fundraising effort now make it possible to envision a late fall 2018 start for construction of this new home for the Studio Museum, the premier center for contemporary artists of African descent, the principal visual art institution in Harlem, and a magnet for visitors from around the world.

With plans for the building having received a warm welcome from the community and enthusiasm and support from New York City officials, the Studio Museum today unveiled the design and made public a capital campaign led by the Board of Trustees, with a goal of $175 million to meet hard and soft construction costs, provide an operating and capital reserve, and build endowment. A range of education and community programs inaugurated as part of the celebration of the 50th anniversary will ensure that the Studio Museum remains a vital presence in Harlem and throughout the art world during the construction period.

Thelma Golden said, “We are thrilled to announce that during our 50th anniversary year, we will begin construction on the single biggest initiative the Studio Museum has ever undertaken, making David Adjaye’s brilliant design a reality. We look back with pride on our legacy, so much of which has been built within the space that Max Bond renovated for us. We look forward to constructing a building that provides unprecedented resources for our work and creates a superb new cultural landmark for Harlem and the entire City of New York.” 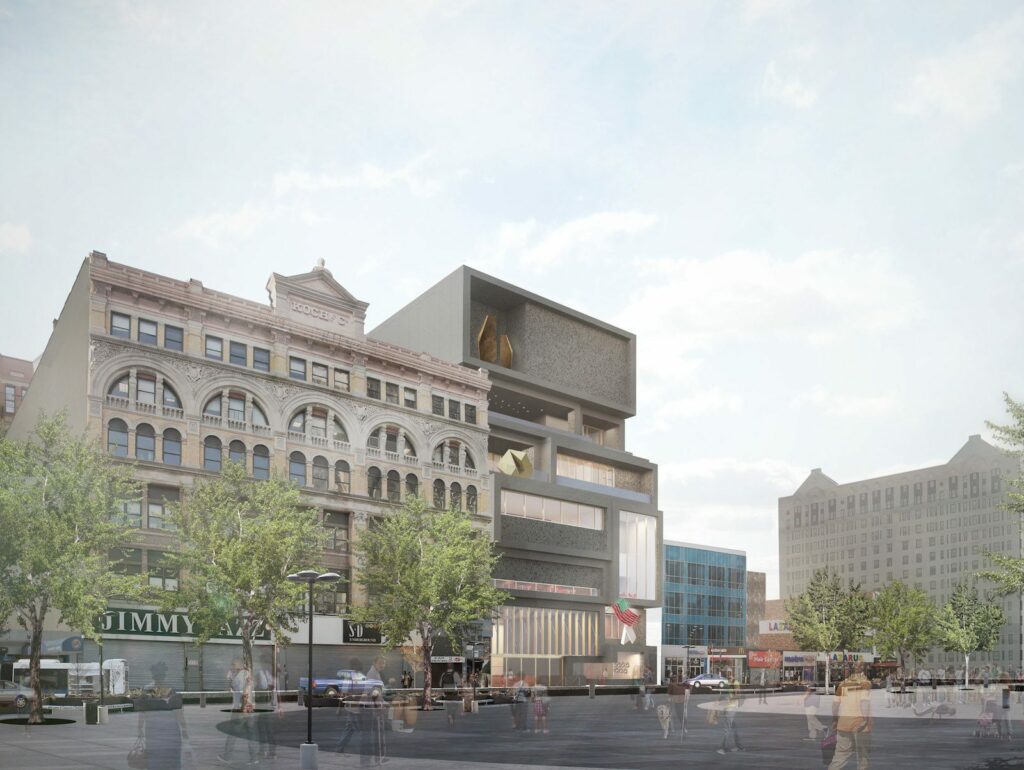 The new five floor building will welcome it’s visitors with and area for presentations (lectures, screenings, performances, educational activities, etc.), a welcome center, a café at the lower level. Galleries for temporary exhibitions and the Studio Museum’s unparalleled permanent collection are provided on the second, third, and fourth floors. An education center occupies part of the third floor, adjacent to a double-height gallery with a barrel-vaulted ceiling. The fourth floor accommodates both an exhibition gallery and dedicated spaces for the signature Artist-inResidence program, which puts the “Studio” in the Museum’s name. The roof is designed for use as a terrace and event space. Niches on the facade on both the 125th and 124th Street sides of the building will display outdoor sculpture.

Taking its cues from the brownstones, churches, and bustling sidewalks of Harlem, David Adjaye’s design provides the Studio Museum with a dynamic, sculptural facade that contrasts strongly with the surrounding commercial buildings. The building has a porous, welcoming presence at street level, a light-filled core that soars up through the entire interior, and a tiered public hall, which the architect has likened to an “inverted stoop” that invites people to step down from the street into a multiuse space that will be free and open to the public during Museum hours and used for presentations and informal gatherings.

“It has been an honor to work alongside Thelma Golden, the Board of Trustees, and the entire Studio Museum team to craft a new home for the Studio Museum—one that will build on the museum’s incredible legacy and deepen its relationships with the local community and an expanding global audience. Above all, we have sought to create spaces that celebrate the rich heritage of the institution, its relationship with artists and its role as a pillar of Harlem’s cultural life. Inspired by the architectural 5 character of the neighborhood and featuring various scales of gallery space that speak to the diverse needs of contemporary artists, the design seeks to ensure that artistic dialogue remains at the heart of the Museum,” said Sir David Adjaye.