A Change in Leadership

It hasn’t been an easy start for the Zeitz MOCCA Museum in Cape Town with its corporatist history and various competing agendas in the mix. Now, just a year after its opening, the museum’s director Mark Coetzee has resigned. Will his departure mean that the museum is finally taking a step toward exposing a more diverse mix of African talent? Sean O’Toole is not so sure.

Mark Coetzee, the enterprising but divisive founding director of Zeitz Museum of Contemporary Art Africa (MOCAA) in Cape Town, has resigned from his leadership role at the South African museum less than a year after it opened in a dockside shopping mall in Cape Town. Coetzee, a close ally and confidante of German collector Jochen Zeitz, tendered his resignation following his suspension pending an inquiry into his professional conduct.

The nature of the charge/s and scope of the enquiry were not disclosed by the museum’s spokesperson, Tamra Capstick-Dale. But she confirmed that Azu Nwagbogu, the founder of LagosPhoto, a Nigerian photography festival launched in 2010, had accepted the offer to become the museum’s executive director and chief curator.

Formerly one of Zeitz MOCAA’s five “curators-at-large,” Nwagbogu previously advised the museum on photography and also curated a concise survey exhibition for Zimbabwean artist Kudzanai Chiurai titled Regarding the Ease of Others, which formed part of the museum’s inaugural shows for its September 2017 launch.

Coetzee’s departure brings to a close a distinct chapter in the long and difficult birth of this young museum. The story of Zeitz MOCAA features two distinct narrative strands, one involving mall owner V&A Waterfront, which in 2009 initiated and underwrote plans to build a Thomas Heatherwick–designed art museum in a disused grain silo, the other involving Zeitz and Coetzee, who first met in 2008 in Miami. As Coetzee tells it, the latter strand of this corporatist history was often put forward as the only story, complicating already strained relations with the V&A Waterfront, which owns the museum.

While tightly contained, hints of conflict between the museum’s various interest groups are well known. Not all of them involved Coetzee. There was a tense legal standoff between the V&A Waterfront and Zeitz in the lead-up to the museum’s opening. These tensions have in turn split the board of trustees, which is jointly chaired by Zeitz and V&A Waterfront CEO David Green, into two distinct factions.

The museum’s internal design was another source of woe. Coetzee and Heatherwick crossed swords over the number and scale of galleries in the museum, a battle Coetzee ultimately won: Zeitz MOCAA is noteworthy for its poky, low-ceilinged galleries, which often struggle to hold or reflect the ambition of the exhibiting artists. A hang of one of El Anatsui’s bottle-top draperies is a stark case in point.

More pertinently, in a museum staffed with a high number of inexperienced curators on fixed-term contracts sponsored by donors, it is perhaps the bleed of key staff members under Coetzee’s tenure that has been most telling. Two key Zeitz MOCAA staffers, Elana Brundyn and Owen Martin, jumped ship early on; Brundyn, formerly Zeitz’s director of institutional advancement and external affairs, now heads up Norval Foundation, a rival art museum where Martin is the chief curator. 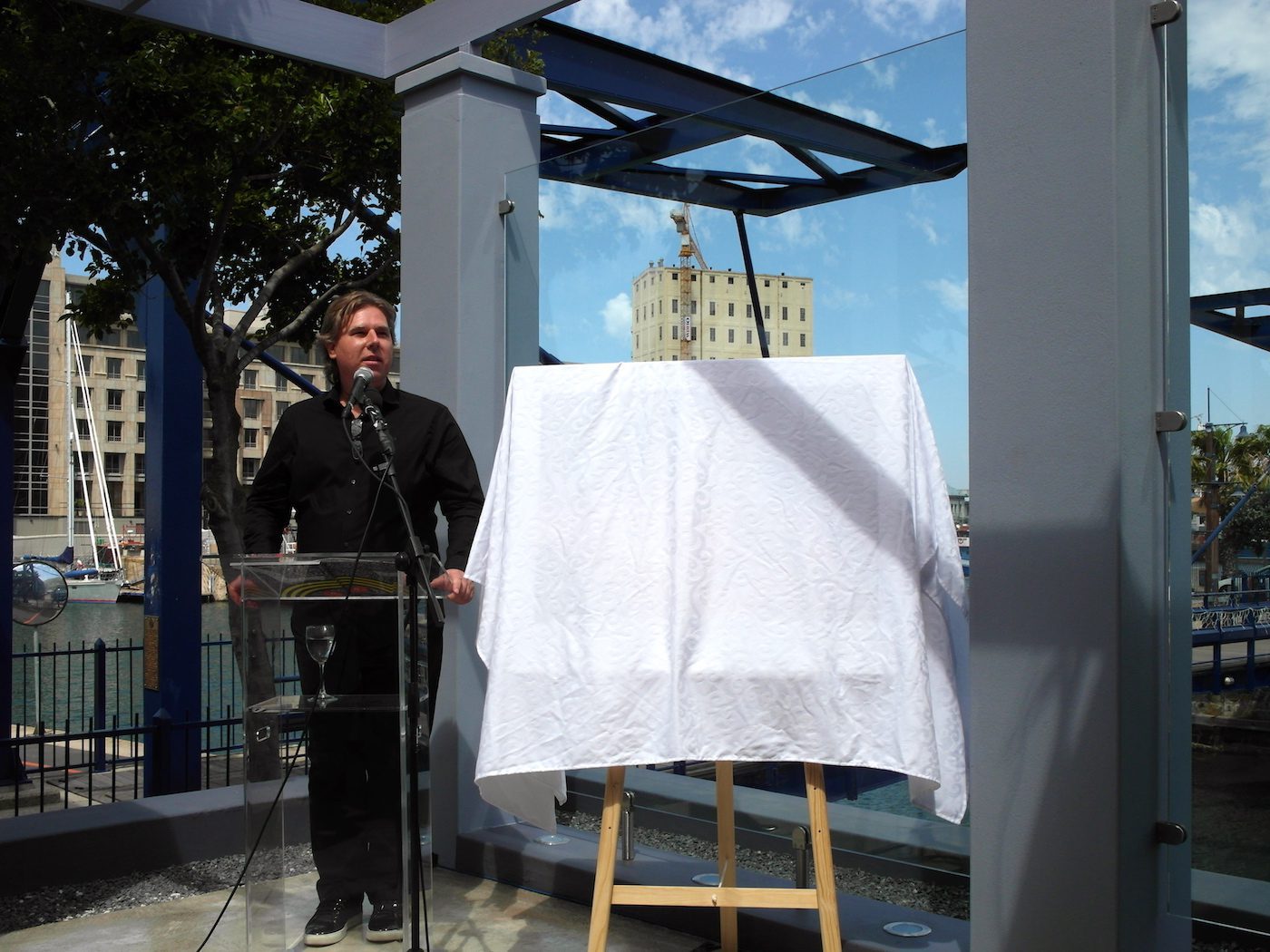 But who exactly is Mark Coetzee? A painter by training, Coetzee segued into curating in the late 1990s with the establishment of his eponymous Mark Coetzee Fine Art Cabinet in Cape Town. The gallery is still fondly remembered for its innovative programming. In the early 2000s, Coetzee moved to Miami to direct the Rubell Family Collection, one of the biggest private contemporary art collections in North America. Drawing from the collection’s holdings, Coetzee oversaw travelling shows for Hernan Bas at the Brooklyn Museum and Leipzig School painters at MASS MoCA.

It was in Miami that Coetzee first met Zeitz, then still CEO of sportswear brand Puma, with whom he organized the Puma-sponsored exhibition 30 Americans, a showcase of prominent African-American artists acquired by the Rubells that included Glenn Ligon, Kehinde Wiley, and Hank Willis Thomas—all now represented in the Zeitz Collection too. The show was a hit. Just as important, Zeitz gelled with Coetzee: by their own account, they shared a common disbelief in the lack of visibility for African and diasporic artists, as well as an action-oriented plan to remedy this. “We decided it is important that Africa tells its stories through the eyes of artists,” Zeitz told me last year.

In 2009 Coetzee left Miami for Nairobi to take up a senior post at Puma, as well as serve as Zeitz’s art curator at Segera, the luxury wilderness retreat and sustainability institute he founded in 2009 in Laikipia Plateau, near Mount Kenya. Coetzee’s first big project was the much-hyped social networking website Creative African Network, underwritten by Puma. Its failure saw a shift in focus, Coetzee spearheading a remarkable buying spree of art for a Zeitz-branded museum—initially it was slated to open in Nairobi, but after 2012 its destination changed to Cape Town.

Many of Zeitz’s key acquisitions showcased at the museum bearing his name were made at the Venice Biennale, including Nicholas Hlobo’s dragon sculpture, Iimpundulu Zonke Ziyandilandela (2011), and Angolan photographer Edson Chagas’s photographic installation Luanda, Encyclopedic City (2013). The pace of buying was intense, and Coetzee quickly earned a reputation among South African dealers for his outsize personality and grandiosity.

Coetzee was aware of the dislike he inspired. “I think for me one of the most stressful things is the way that the local community has not trusted itself,” he told me in an interview shortly before the museum’s opening. “Whereas, when I travel, internationally everyone is so excited—the expectations for this are so high.

Despite widespread discontent with his brittle, all-knowing manner, whimsical buying of young talent, and cozy relations with art fund owners, Coetzee was rarely challenged. Art critic Matthew Blackman’s open letter to Coetzee and Zeitz in March 2015 brought allegations of impropriety to the surface, but there was never any response to this.

The cozy compact between Zeitz MOCAA’s former director and South African dealers ultimately delivered a museum that, for all its promises of surveying twenty-first-century African art practices, reads like a greatest hits compilation of recent work by Goodman Gallery, Stevenson, and Whatiftheworld Gallery artists. The museum’s programming in the first few months has been, at best, lackluster. The much-promised exposure of African talent—as opposed to the reiteration of essentially local talent with creatively tooled resumes accentuating their difference—remains a work in progress.

The schadenfreude accompanying news of Coetzee’s resignation, on social media especially, recalls something Coetzee told me last year: “The art world is a very sophisticated place; consensus gets formed very quickly.” That consensus, inasmuch as it can be gauged in the midst of an institutional crisis, is that Zeitz MOCAA is entering a new era.