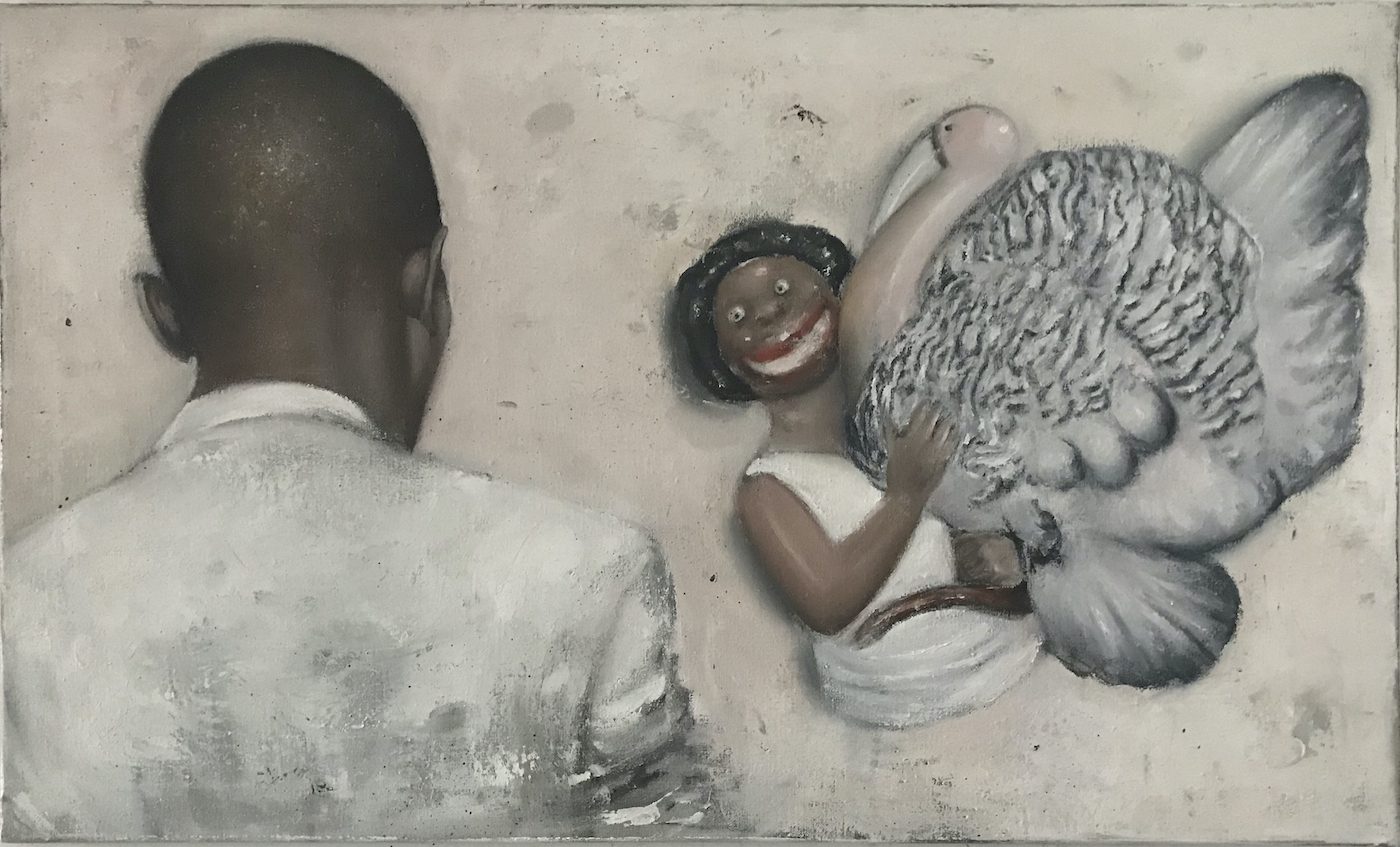 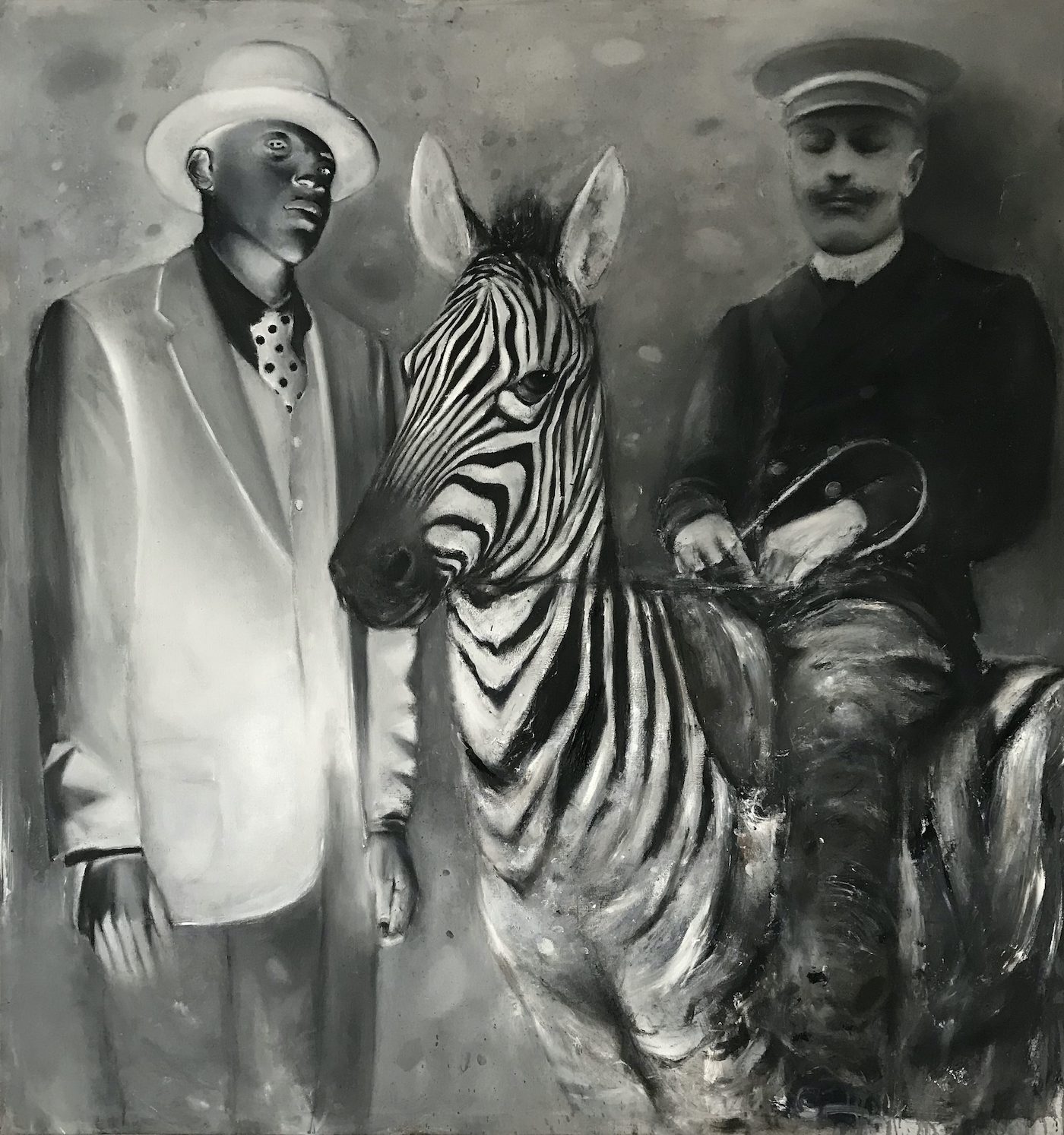 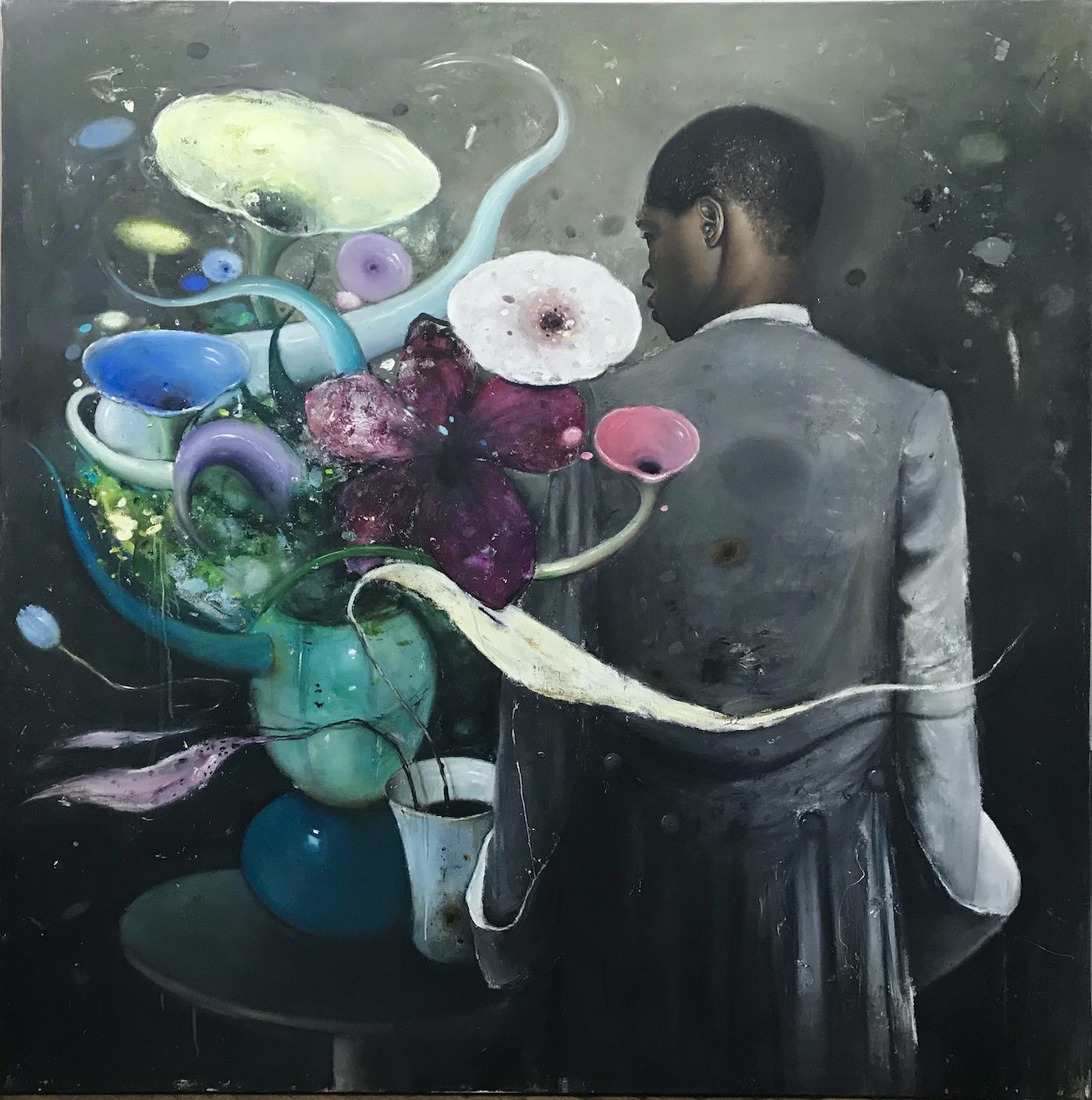 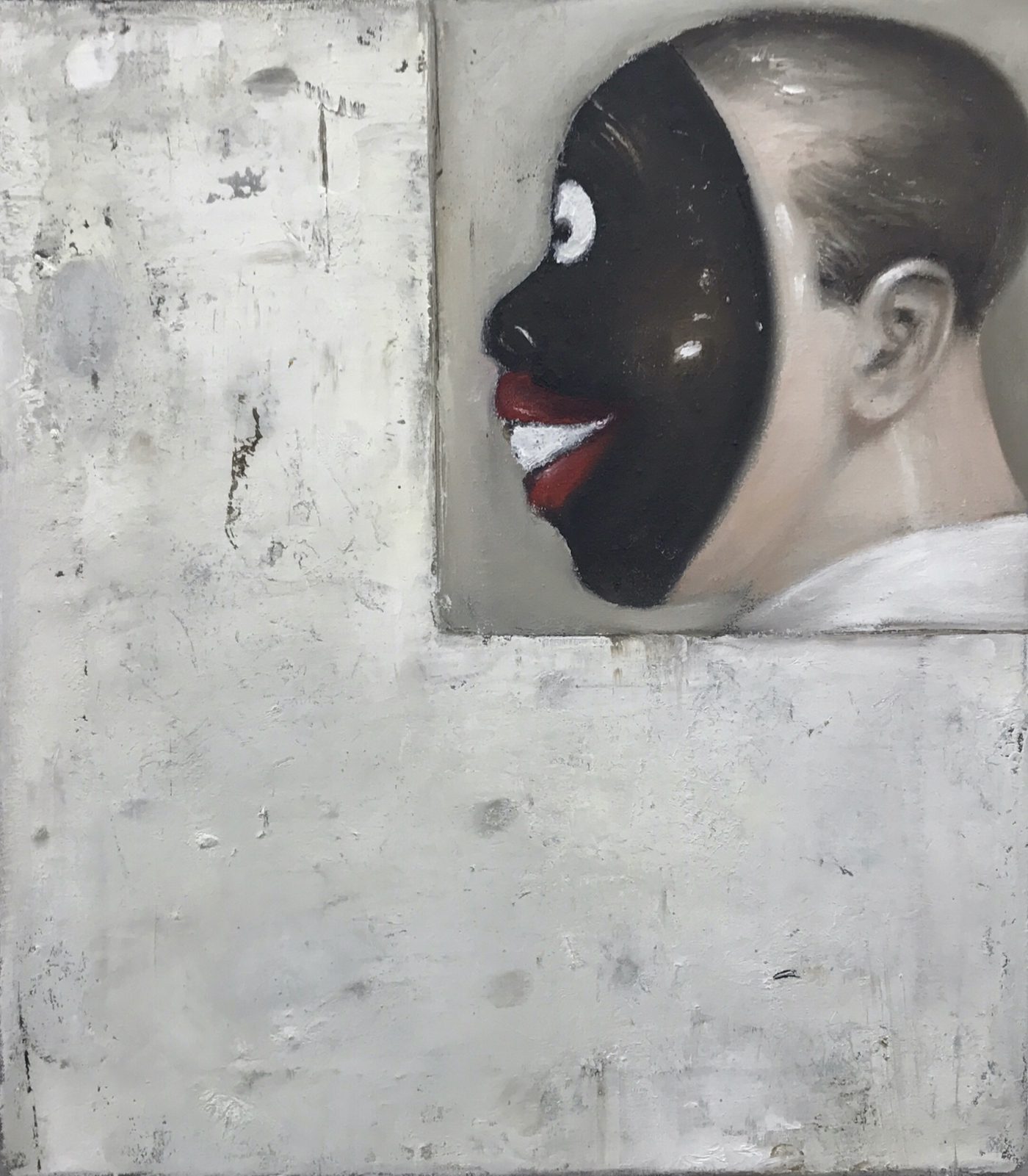 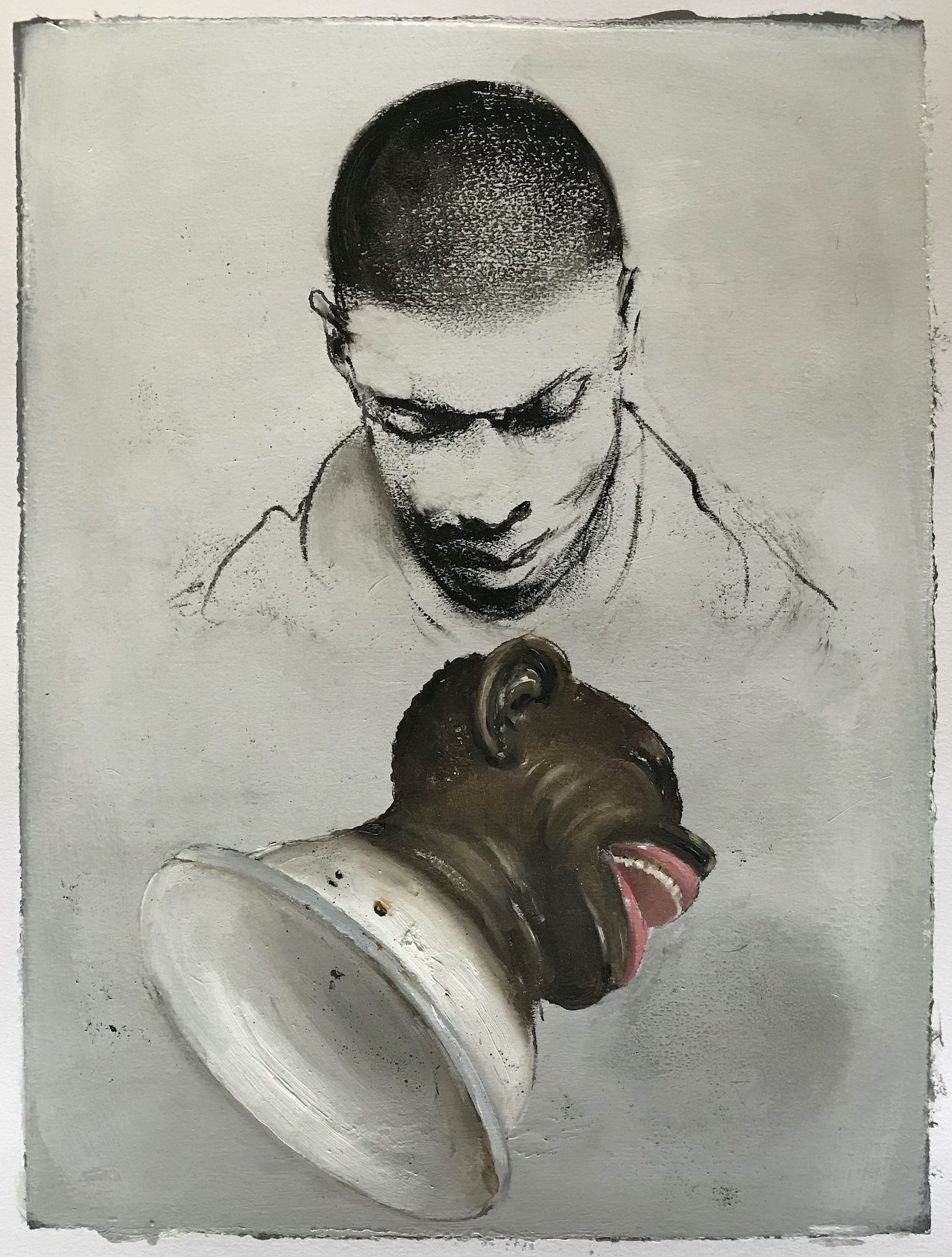 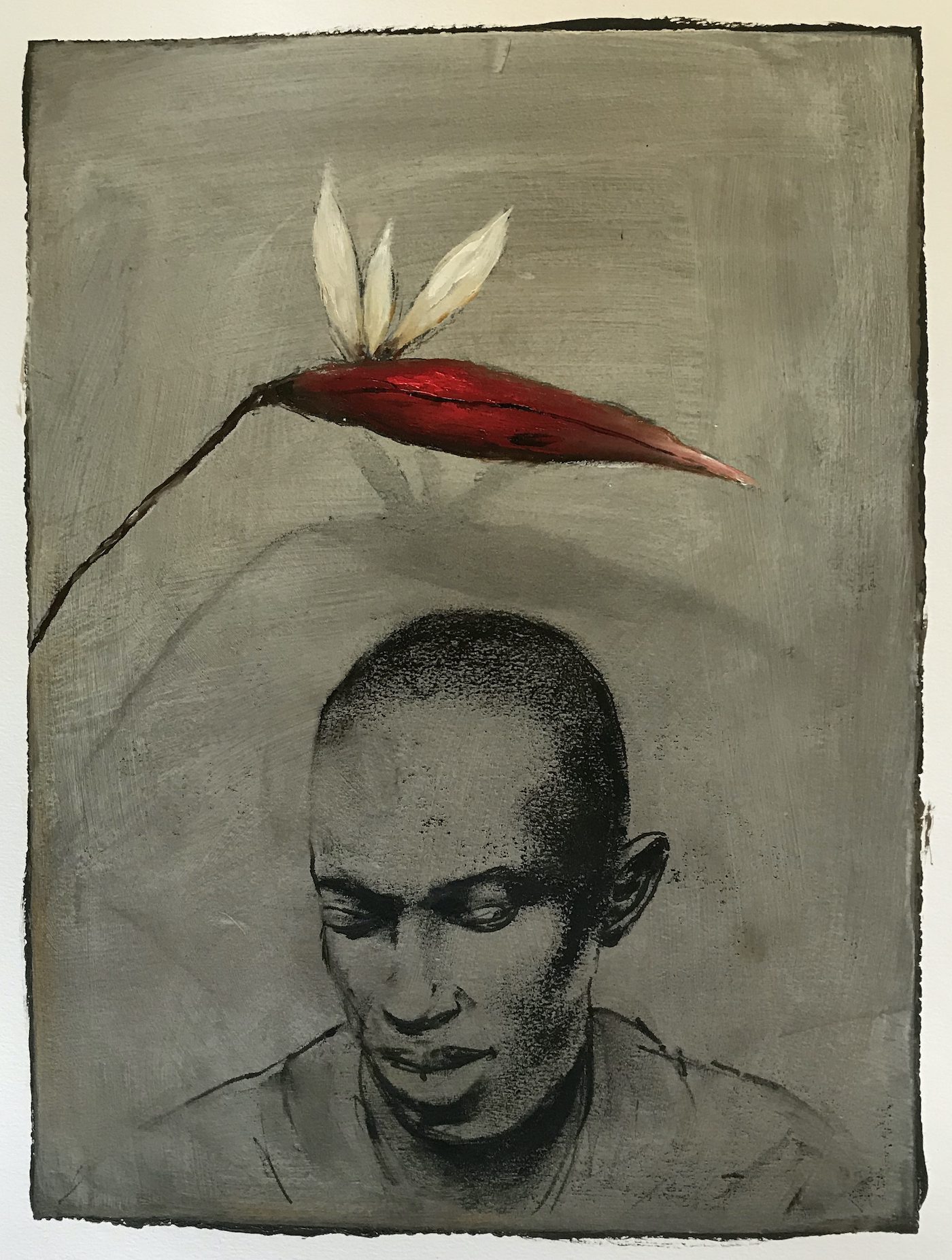 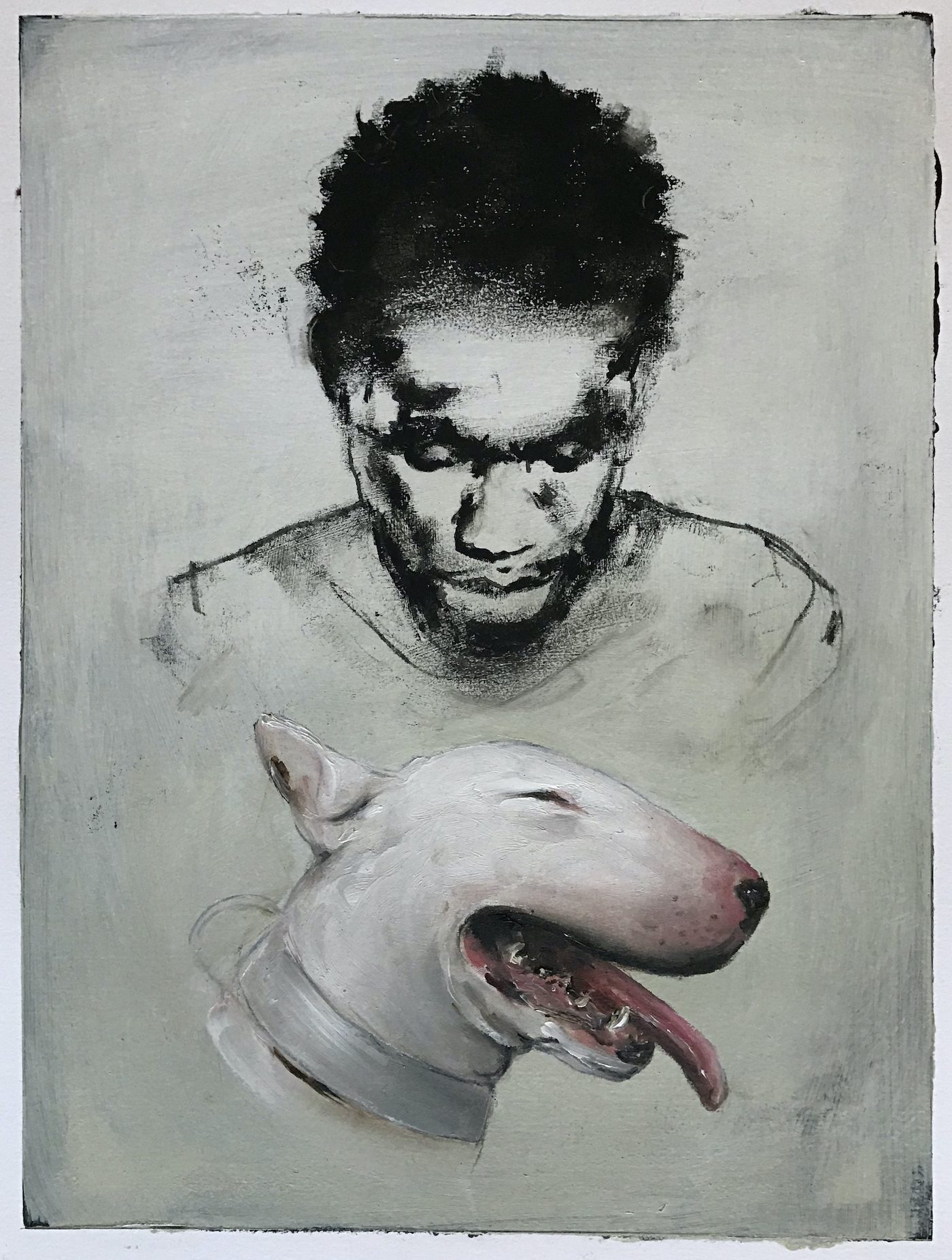 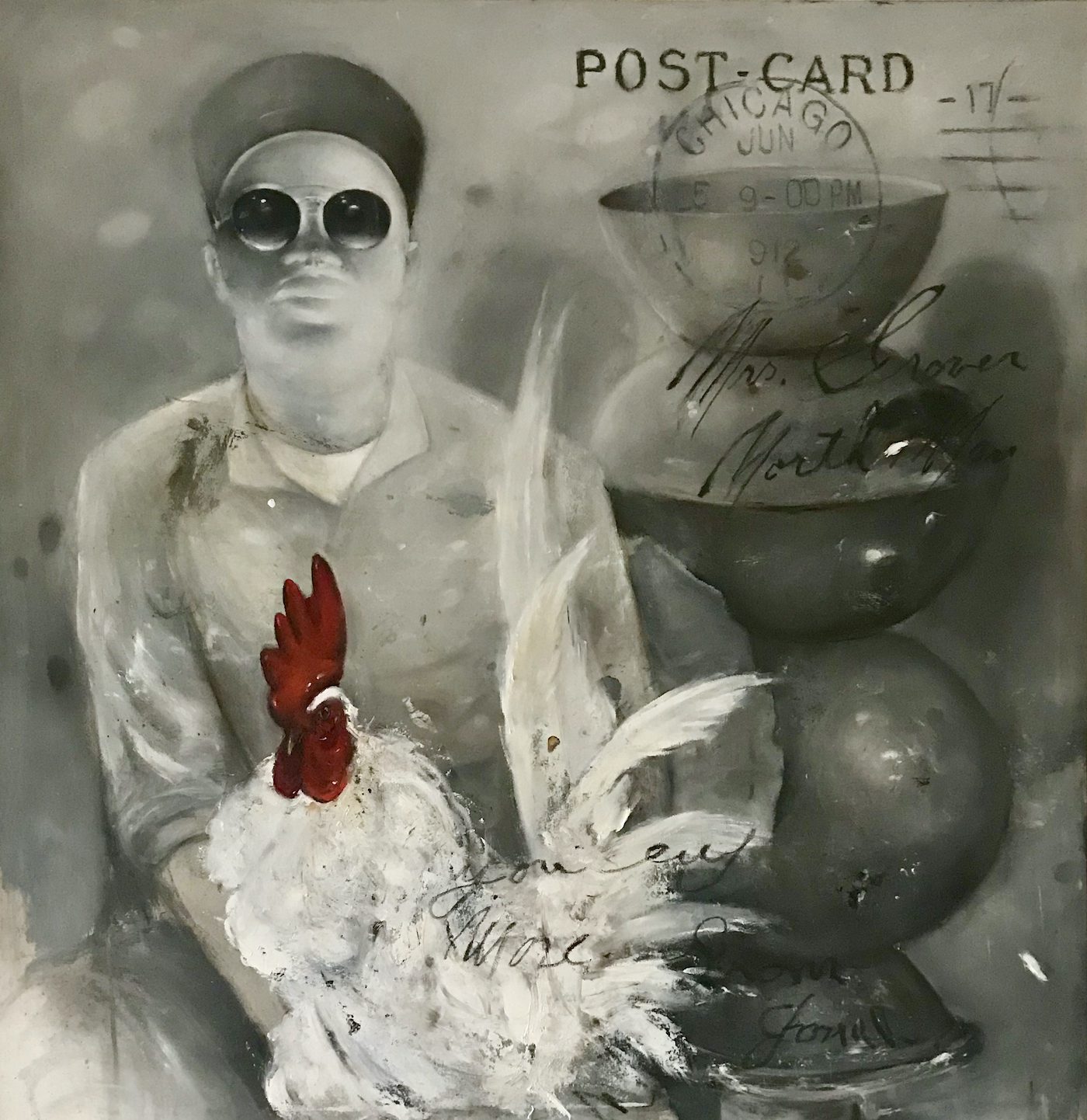 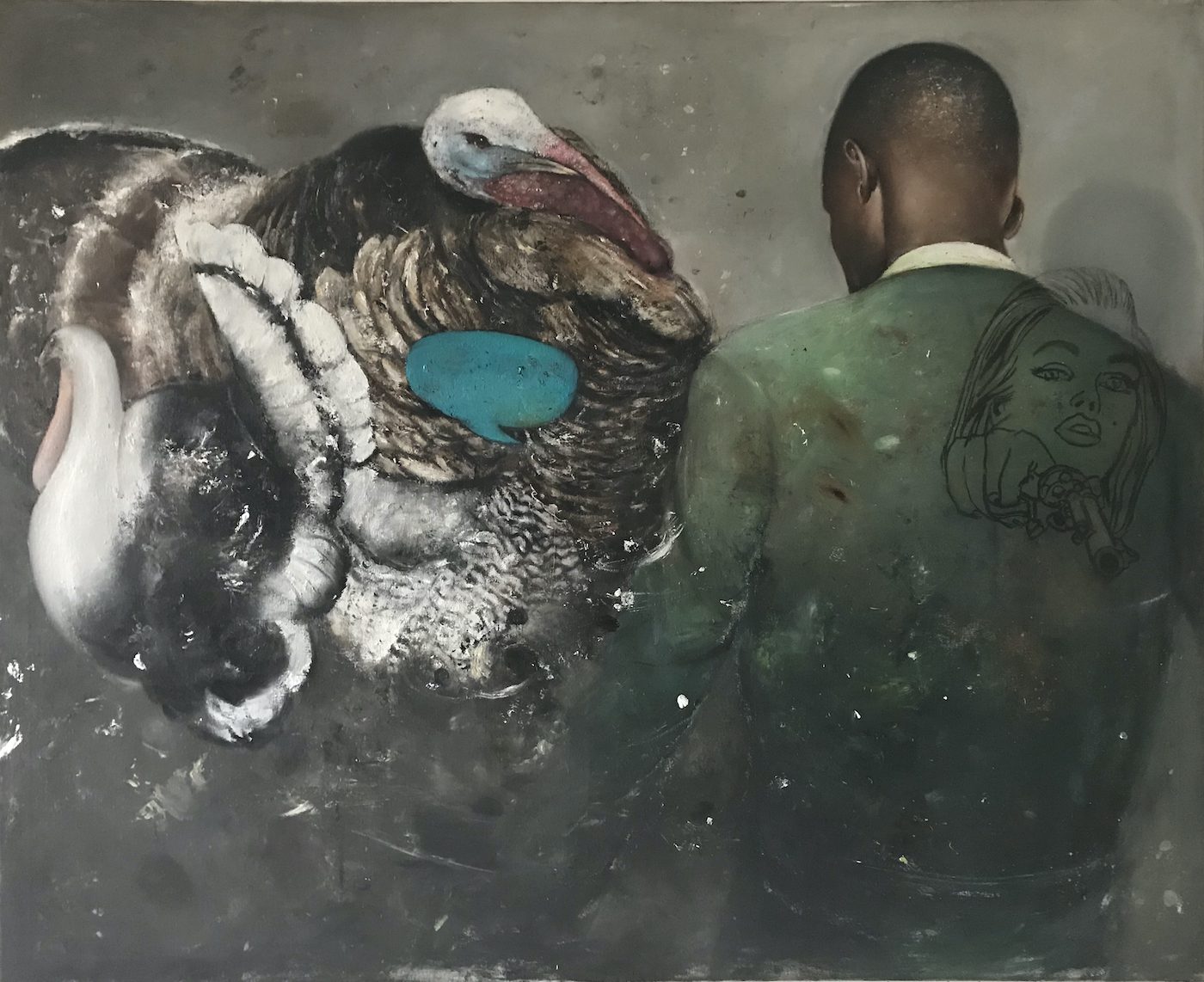 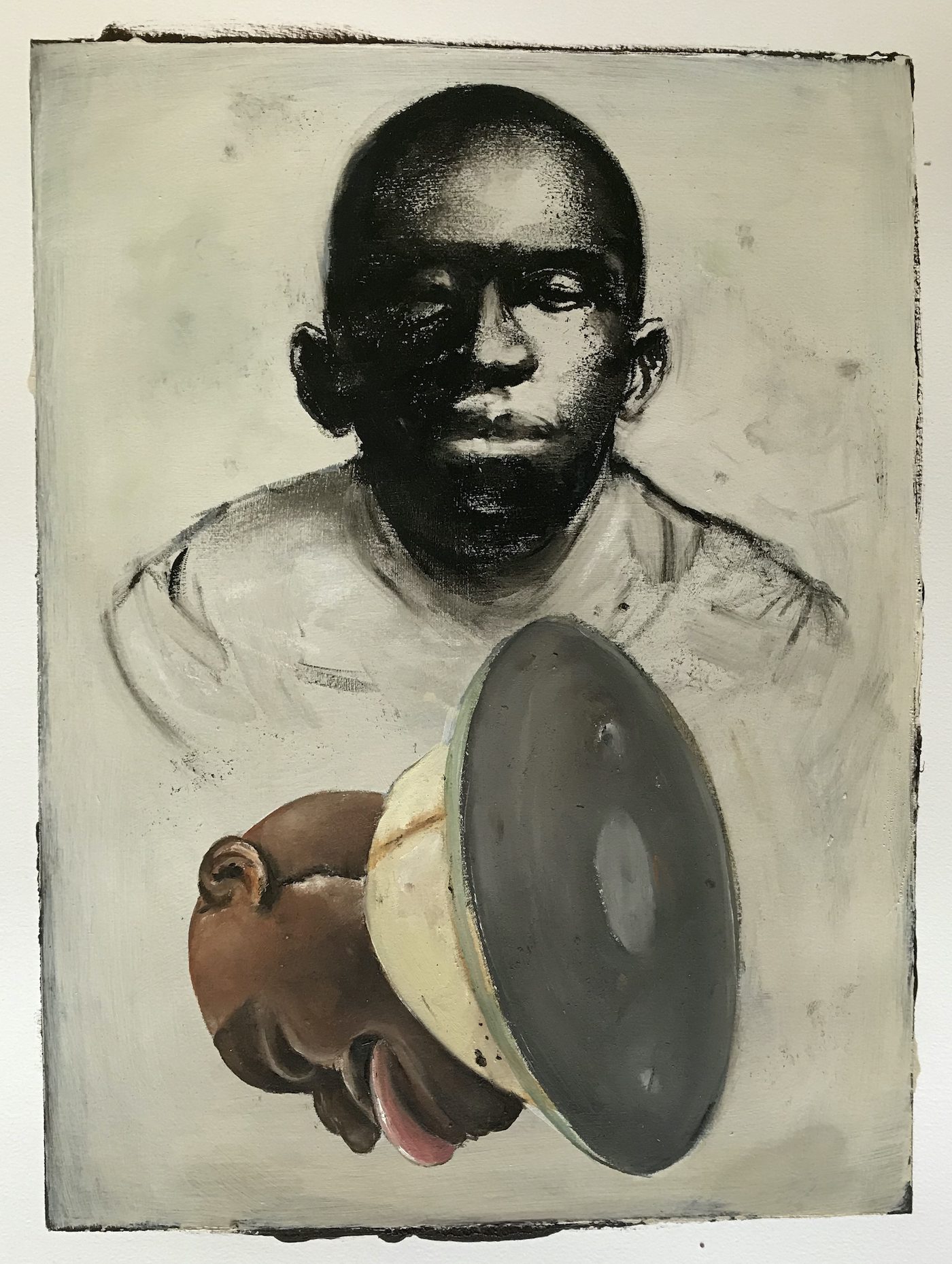 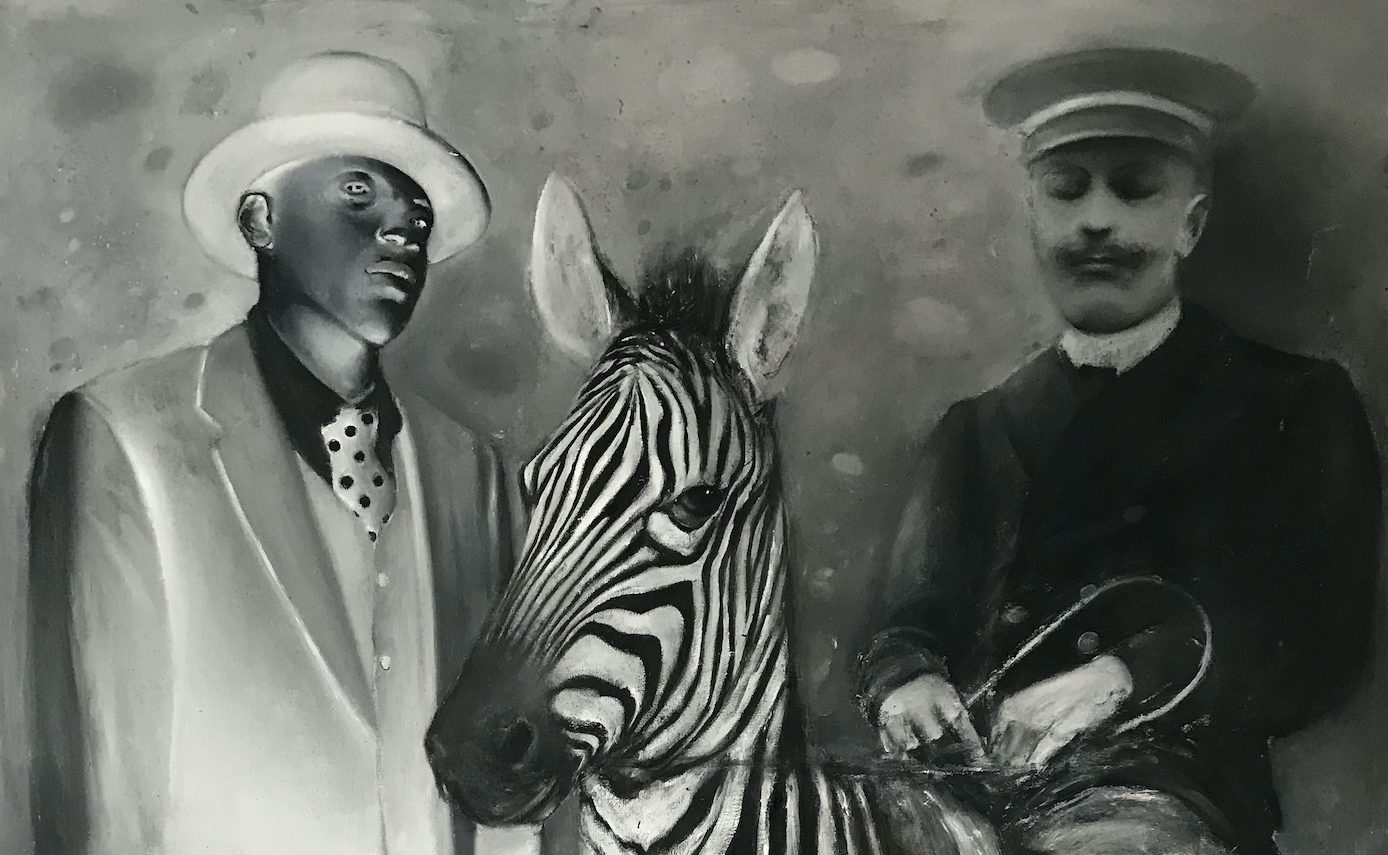 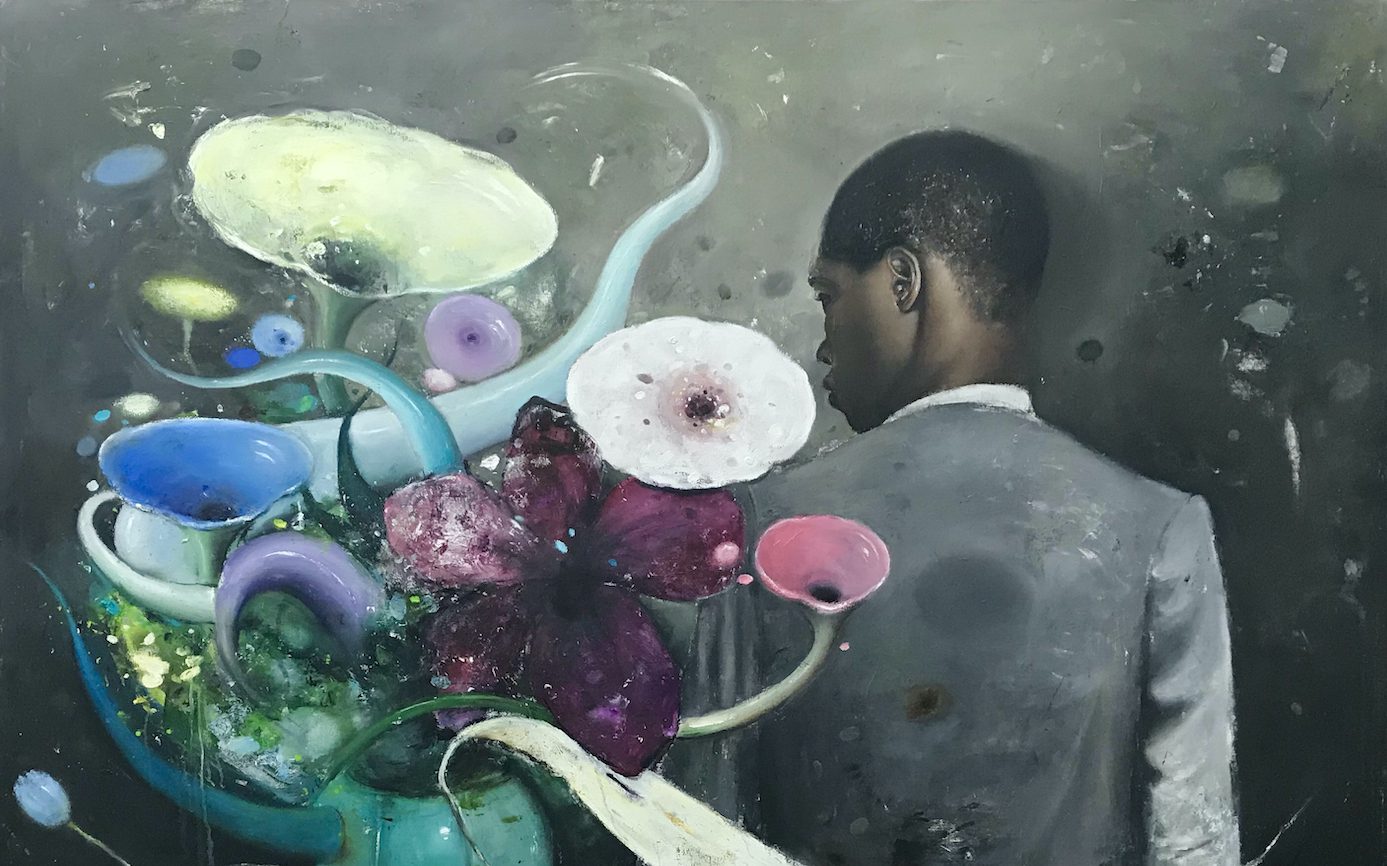 Ransome Stanley was born in 1953 in London to a Nigerian father and a German mother, raised by a middle-class white family. His Nigerian father left before he finished kindergarten. His white stepfather was a school principal in rural Grenzach in southeast Germany. Stanley has never been to Nigeria. Now he works as successful painter and travels around the globe to show his work.

I meet Stanley in his Munich studio, and he immediately warns me – his head is full of things, he has a truckload of emails to send, an upcoming show in Switzerland isn’t ready yet, his pictures for some reason still stuck in South Africa. He admits to not really being in the right mental space for a conversation and kindly asks me to maybe move the talk to another date. But before we know it one thing leads to another and we have inadvertently talked for two hours. What was supposed to be a mutual agreement to meet up later becomes an Afro-diasporic exchange.

Contemporary And : I want to do a piece that intertwines our diametrically different lived experiences of German blackness…

Ransome Stanley: I love that this conversation is being held. You have to imagine in the 1960s when I grew up in Germany, that was right after World War II, there were still so many Nazis – teachers, police, etc. My grandfather owned Hitler’s book My Struggle. In my village I would get called the n-word. My kids grow up in this era and here in Munich, which is much different.

C&: I do think a lot of racism experiences are repressed. Because I, twenty-five, also grew up in Munich and sometimes catch myself thinking “Wow, I haven’t really experienced racism like that,” when in reality I have. People called me a monkey my first day in high school, but I made myself forget that aspect of my growing up.

RS: What could have been a huge difference for you is having your father around. You could look up to him and see a reflection of yourself. Maybe that helped you forget. I only had my white parents. That was painful sometimes. I couldn’t really repress anything, it was right there. I do recall answering “my mother is from here, my father is from Africa.” But “Africa” to Germans meant jungle, wilderness, tribal dances, women with plates in their mouths. That’s what I would see on television. To be completely honest, sometimes I would be very ashamed of my African roots. Seeing those archaic images, my own grandma would say “these people are mighty ugly.” It was very normal in German media to call them “wild” and “uncivilized.” Disgusting.

C&: Currently there’s big debate here on whether it’s too invasive to ask “Where are you from?” to get an explanation for somebody’s ethnic background.

RS: I named my book that phrase, “Where do you come from?” Because in my whole life there is no question asked more frequently than that. Everyone, every-one, asks me that question! It really depends on the context how I respond. Sometimes I say “Grenzach,” then they ask “And where your parents from?” I respond “Grenzach,” and then they proceed to ask me “Where are you originally from?” Other times I just say “I’m English,” because I hold a British passport, and the response will be “Oh, but you don’t really look like an Englishman!”

C&: Many people say “Well it’s just curiosity, I am just interested! Why do you mind?”

RS: Look, if you see a person at a table who only has one arm and the very first question is “Hey buddy, why is it that you only have one arm?” – that is an absolute no. The topic can organically come up, if the context allows. But if that’s the first thing you want to know, you’re not showing curiosity, you’re making the person opposite you feel as if they are weird, strange, or “other.” And that is already judgmental. That’s like walking up to an attractive woman and saying, “Hey, I want to sleep with you.” Yeah, you might think that, but have some respect.

C&: In my class in school, only two of the twenty kids had two parents of white German heritage. I imagine it was the opposite in your era? Did you even identify with other folk of non-German descent?

RS: They were there, but they were labeled “guest workers,” they had Italian or Greek parents. We didn’t necessarily associate with one another. I related to other people who are Black. I wanted to see positive and normal images of Black people. Today I get joy from seeing Black people as supermarket vendors, working in a bank, being teachers.

RS: Really? Wow, I have never seen that.

C&: Yeah! Do you recognize your good old Germany? Is that change frightening?

RS: Absolutely not! I love it! The more the better! Something I must say though – when I recently traveled to East Germany, it did feel like time-traveling to my childhood era. Over there people will stare at you like an alien. And not positively. I saw skinheads in their car really looking me up and down, filled with hate. Growing up the way I did, basically I’m a human seismograph, I feel that stuff. I feel it. It is an accumulation of gestures, facial expressions, stares. It is a very evil atmosphere.

C&: So if Black Germans want to know what growing up Black in 1960s Germany felt like, they should just visit rural parts of East Germany?

C&: In your day, Germans slowly started to appreciate jazz, high-life, and soul music. They labeled it “Negermusik,” which you dance to. How did (Black) music play a role in your life?

RS: My mother would listen to the dopest stuff, from jazz to Afrobeat. She had John Coltrane LPs. But her friends and my friends’ parents listened to the most atrocious music. This whole pop music, it just never touched me at all. The families around me would listen to German folk pop or ABBA. The worst music you can imagine. People who listened to ABBA were the boring, corny, square folk. I totally couldn’t connect to that. At the same time you had Jimi Hendrix, his album Electric Ladyland was my shit. He was so important to me. There was a superstar that looked like me. He had an afro and I did as well. He was like a God, he had a skill that nobody else had. To this day I feel a huge aversion to German folk pop. The German-ness of it. Even indie-rock. “White music” didn’t do anything for me.

C&: What Hendrix was to you, R&B and hip hop was for me. I honestly cannot for the life of me connect to “white genres” or “German pop music.” It’s not a conscious decision, just something I felt growing up. It didn’t resonate.

RS: That brings me to one particular German figure who has caused so much damage for us, where I really have to say “I hate you.” [Pop singer and actor] Roberto Blanco! A really, really problematic figure, who caused tremendous harm to all Afro-Germans. This Black guy is a true Uncle Tom. Had I met him back then I would have grabbed him by the collar and told him “Do you know what you are doing to us? Are you doing it for money?!” He portrayed the ever-smiling coon for white audiences. He makes me want to vomit. No self-reflection at all. He gave an interview back then about doing a concert for neo-Nazis, and he cheerfully said how proud he had been to sign autographs for them. Zero solidarity. The motto was “I don’t care what happens to these lessor Blacks who get killed and attacked by white supremacists, I am exempt, because they love my music.”

C&: Do you think that if your biological father had been, say, white Czech, you would have dedicated much of your work to your East European identity?

RS: Obviously, my skin color played a big role. I think I would be perfectly assimilated had my foreign father been white. This duality within me was reinforced through my phenotype. My friend is half-Polish, but dual identity isn’t really an issue with her. When I began working in art, literally all the faces and characters I had seen were white. I felt it was my duty also to make sure there is more representation. The most urgent and deepest questions, as far as my emotions and creativity go, circle around Blackness and the African Diaspora.

C&: As a journalist I often make identity a huge topic, but it becomes tricky because people ask “Is that all you do?” Does it not become stifling, to always be that “African” guy, because your work is Afro-centric?

RS: I feel you on that one. Sometimes I do actually switch it up: When I do art that is not human-based my European side comes through. That’s where I leave out Africa. I just paint “a room” or another object. But really, those African topics drive me much more.

C&: So you don’t mind always being reduced to “that African guy”?

RS: As a matter of fact Jean Pigozzi, who collects contemporary African art, was once thoroughly impressed by my work, but ended up rejecting it after he read my biography, saying I’m not a real African. So he wound up not buying my pieces because I was not “that African guy”…

Malcolm Ohanwe (* 1993 in Munich) is a journalist, podcaster, moderator and translator.

This article was initially published in our Special Print Issue #Detroit in August 2019. Read the full magazine here.