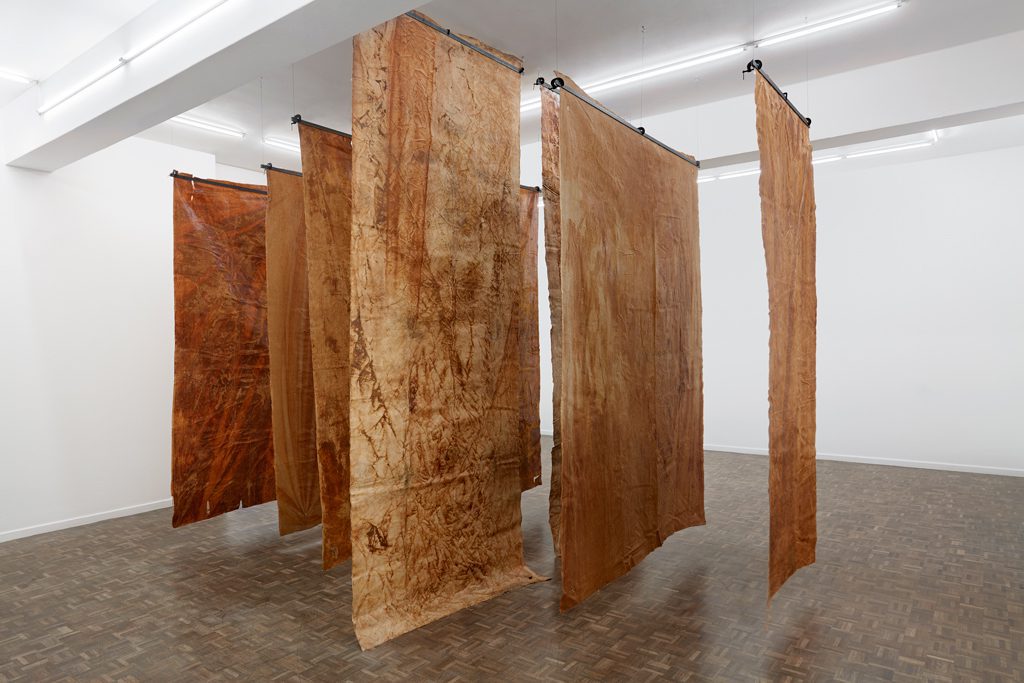 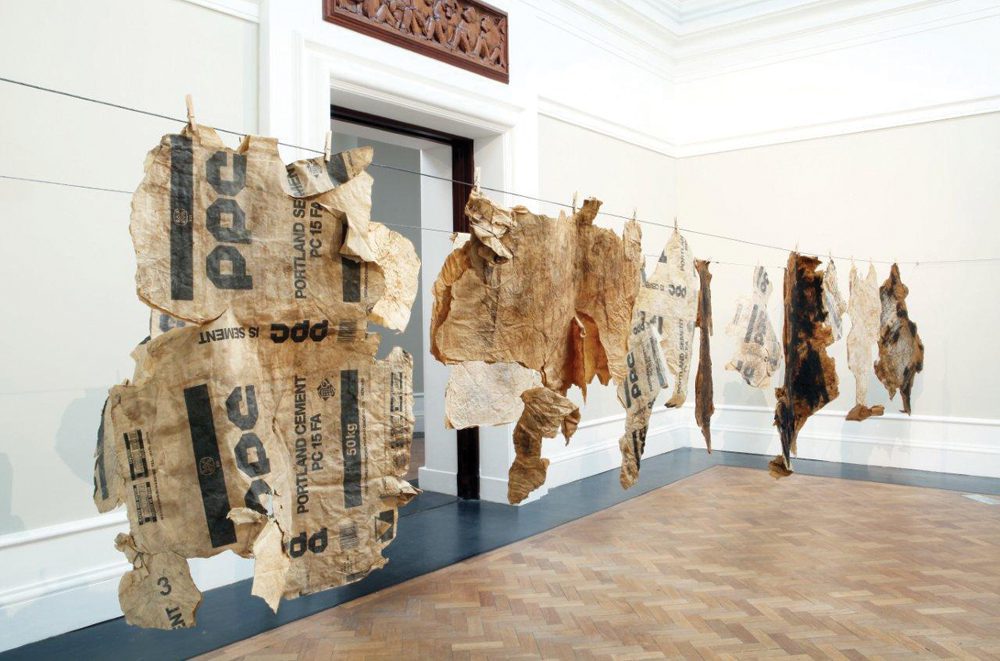 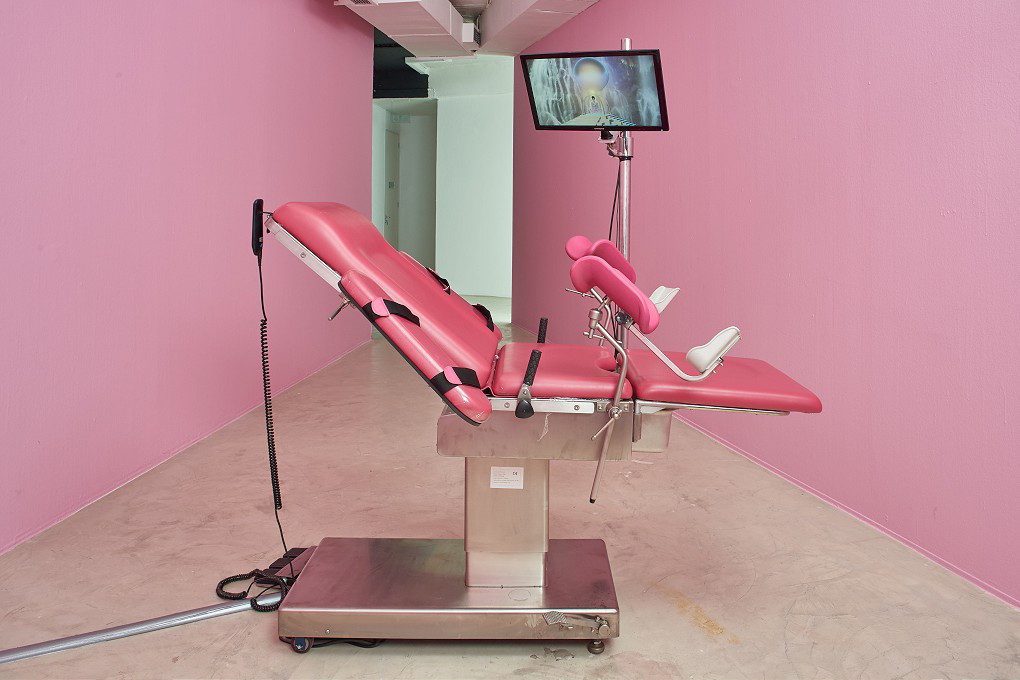 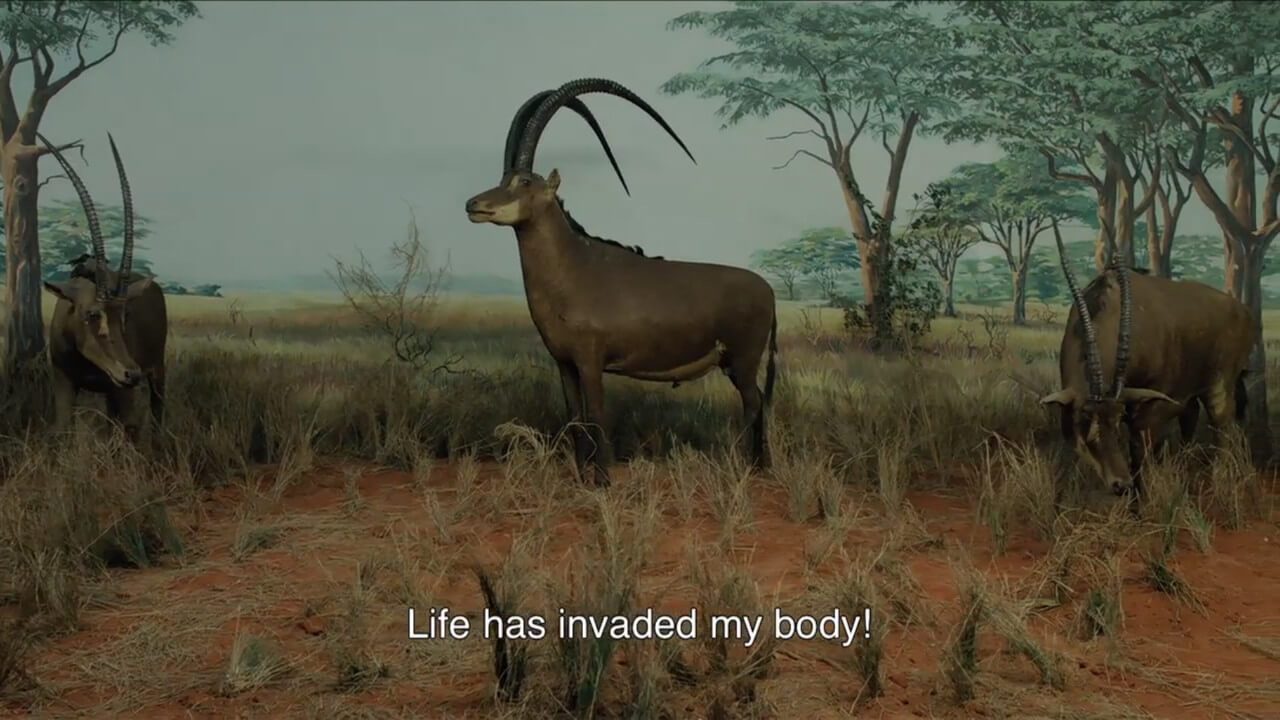 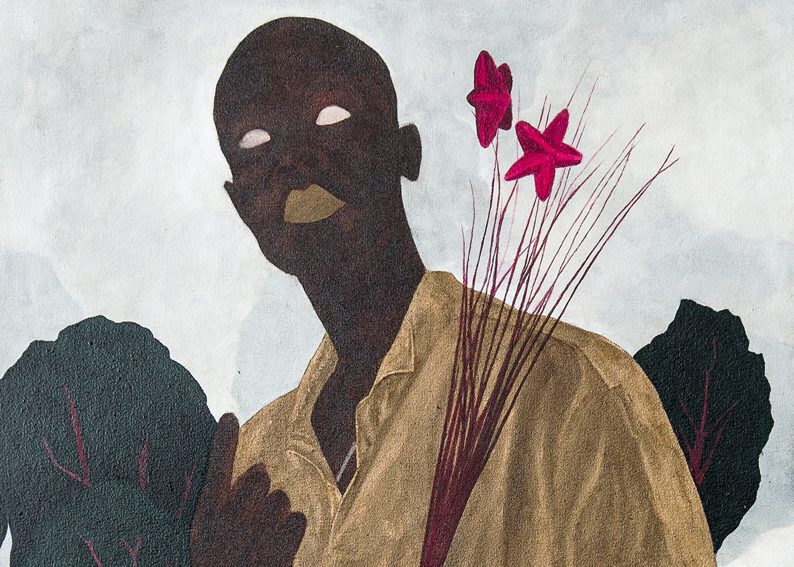 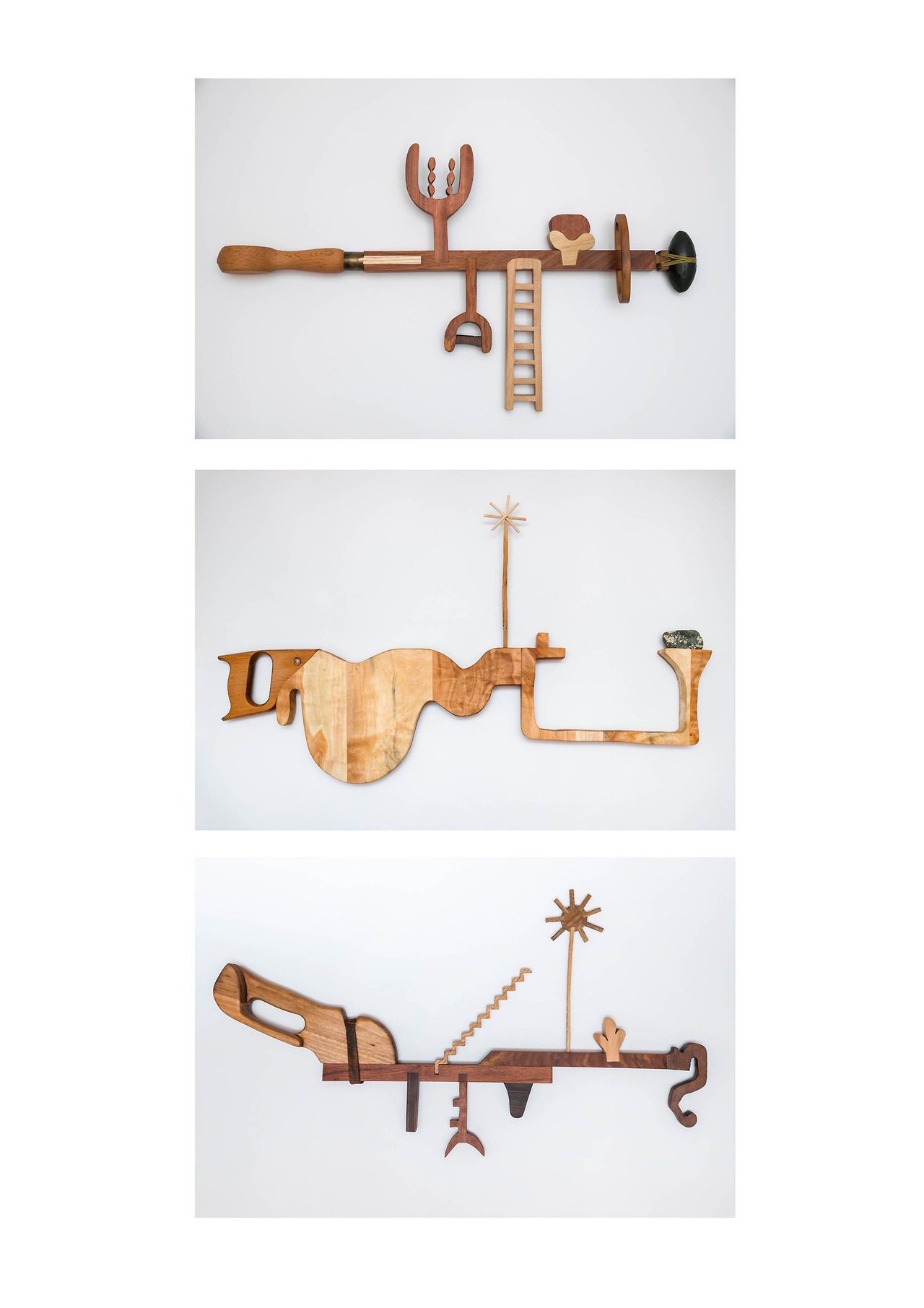 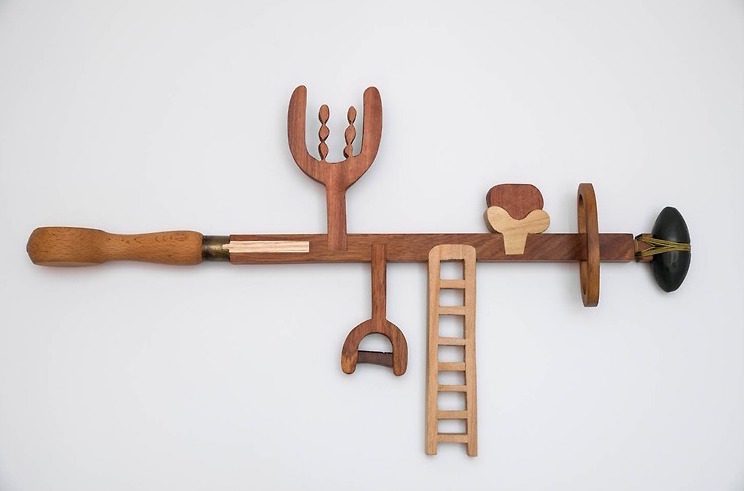 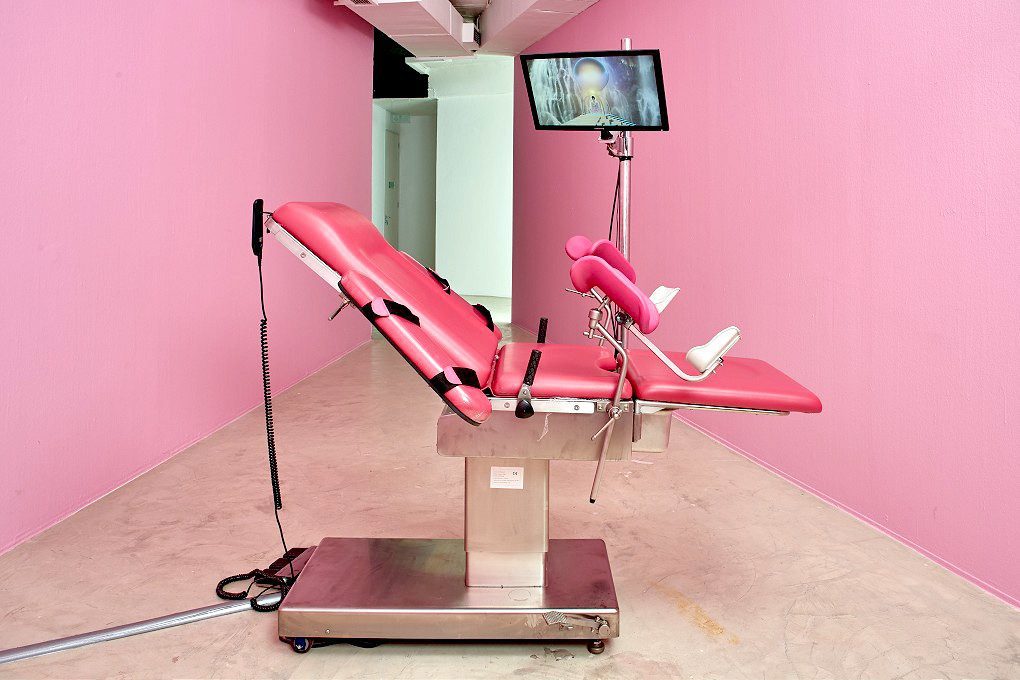 Every Work of Art is a Speculative Technology

Moshekwa Langa’s work has long been a reliable compass for me. Unsurprisingly then, one of my favourite works of 2017 was Langa’s Drag Paintings (2016), an installation of reddish-brown canvases displayed like drying linen on his scintillating solo exhibition Fugitive at Stevenson, Johannesburg. To make the work, Langa took raw canvases and dragged them behind a car at his birthplace in Bakenberg, north of Johannesburg. Afterwards, he lacquered the dust-soiled canvases to preserve their uneven earth tones. Langa describes the canvases as “locked documents”.

Enigmatic expressions of place, Langa’s Drag Paintings are a stark counterpoint to the mostly figure-based work displayed at the Zeitz Museum of Contemporary Art Africa, which opened in September at a dockside address in Cape Town. This new private museum, which focuses on 21st-centruy art practices from Africa and its Diaspora, is viewed as an expression of optimism at a time of economic stagnation and cultural paralysis. Some say it will even supplant the moribund state-owned Iziko South African National Gallery. I’m not so sure about this argument.

On the strength of its opening exhibitions, Zeitz MOCAA looks to be little more than a glitzy temple for a chintzy gilded age art. Connoisseurship and curatorial nous were in short supply. By contrast, Women’s Work: Crafting Stories, Subverting Narratives, a concise survey of textile arts by 33 mostly contemporary artists and collectives at the National Gallery, was a fine example of passionate exhibition making. It presented recent work by Siwa Mgoboza, Athi-Patra Ruga and Lerato Shadi alongside historical pieces by little-known makers, including a rectangular lace insert produced in the 1830s by an enslaved woman from Cape Town known only as Melati. The National Gallery may be impoverished and rudderless, but it continues to reliably deliver wow.

The National Gallery’s permanent collection includes Langa’s Untitled (1995), a hybridized drawing/installation composed of treated cement bags that anticipates his Drag Paintings. Here’s a thought. Every work of art is a speculative technology, an invention with the potential of becoming something else, something important, possibly a navigational system that will lead the artist and her/his viewers into the future. Langa’s Untitled (1995) is a good example. The story of post-apartheid art can be told through this important work, which heralded a new materialism in South African art. Maybe it is unfair to expect every artwork to be a diagnostic and enigmatic technology, but in an overcrowded marketplace for African art it is only fair to cultivate an acute filter.

I saw big shows in Paris, Kassel and Venice with strong African presences, but mostly the works that rocked my world in 2017 were shown in Cape Town and Johannesburg. Beside Langa’s work, here are a few others:

Kiluanji Kia Henda’s single-channel film Havemos de Voltar (We Shall Return) (2017), a wry post-colonial crime caper and droll meditation on the animal displays in the “endless corridors” of Luanda’s natural history museum. The work appeared on his solo exhibition In the Days of a Dark Safari at Goodman Gallery, Cape Town.

Cinga Samson’s self-portrait, Time has no Eternity, (2017), one of handful of gothic selfies in oil by the 2017 Tollman Award winner from his concise solo exhibition Safari Fantasy at Blank Projects, Cape Town.

Daniella Mooney’s Three New Wands I, II and III (all 2017), eccentric re-imaginings in wood of a magical rod she made as an adolescent. The wands appeared on designer and artist Lyall Sprong’s Calibrating Wonder, a gonzo showcase of neo-hippie art and material experimentation at Smith Studio, Cape Town.