When Water Becomes a Screen

Contemporary And: Your video installation is titled oxygène (oxygen) and the projection features nude women in a bathtub. Is there a relationship between the title and the subjects filmed?

Amine Oulmakki: Oxygen is vital to the body’s energy flow. I wanted to work with female friends who are involved in art and join them in asking how to curb the pressure they undergo as women in their work. So the launching point was this exercise of curbing that energy, that pressure exerted by society, and seeking to extricate oneself. There were two instructions: don’t talk, only underwater, and be on your own without externalizing for the other person’s gaze. The three-dimensional installation of the bathtub accompanying the video projection questions our perception of water as a metaphor for our own cycle of existence.

C&: The underwater gazes define the camera: a representation that places the subjects you filmed back at the surface of the image rather than in the depths of their interiority. Is it possible to be truly oneself on camera?

AO: Those very penetrating gazes are what I call « gazes that tear the veil of the image ». If you try to present an image of yourself on camera, it becomes a fiction, as in an adaptation of yourself. The image, as a representation, always has a certain fictionality because every representation emerges from a subjectivity that is in turn built upon fictions. 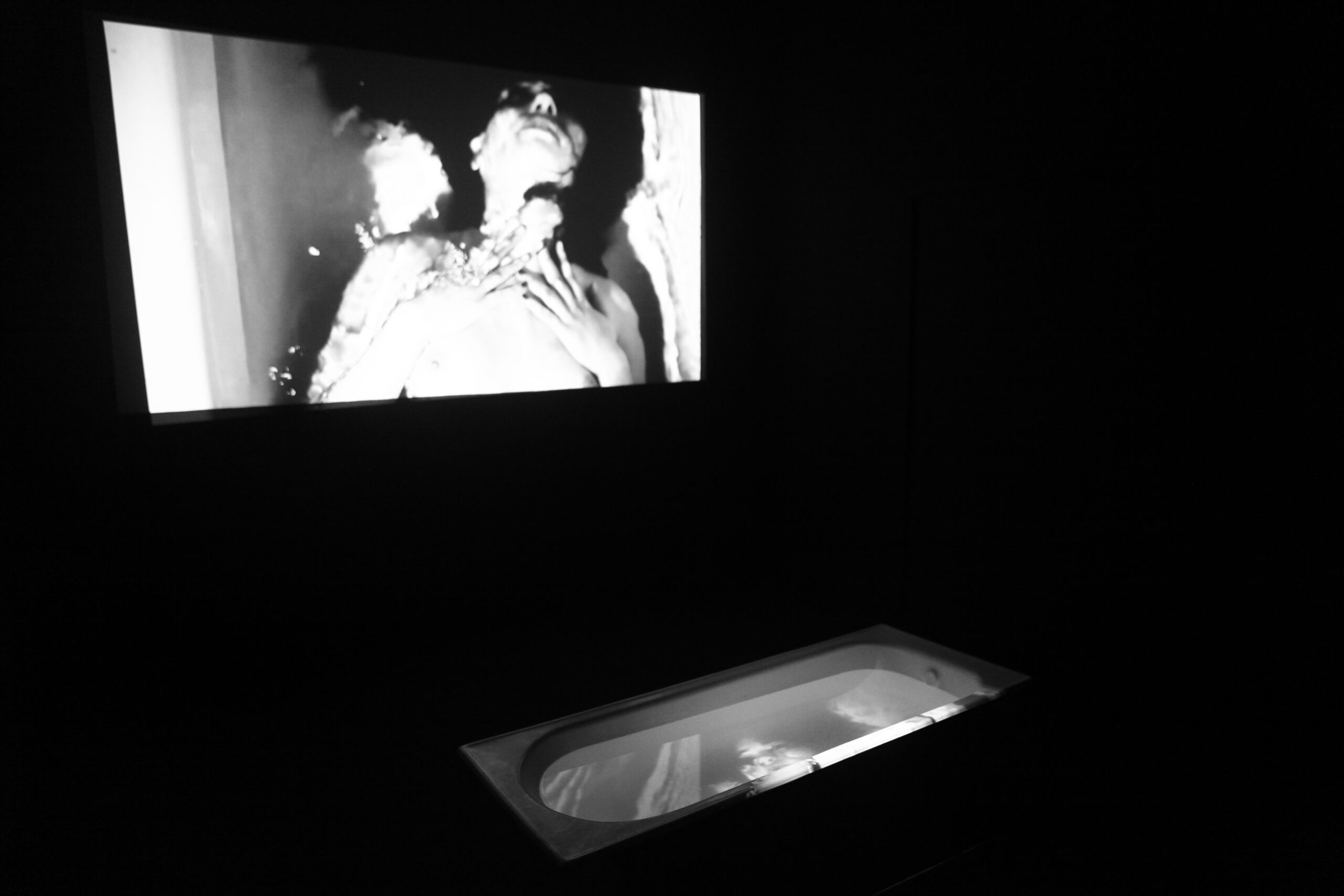 AO: I have always worked in black and white, whether in photographs or film. The image is a moment that has been lived. The time is contained in the image. For me, photography is always associated with that idea of time in the past. Indeed, I see all my memories in black and white. Does the image really possess that quality of making reality visible in an absolute? For me, the black-and-white image also evokes an imagination of color to be interpreted by the viewer’s story. I don’t convey reality; I articulate something between emotion, real and fictional image. So using black and white lets me isolate the image from being taken as proof, from having to justify what is real.

C&: The gaze is not the only form of sensory perception elicited by your installation: hearing is very present as well, and to a certain extent touch, with that notion of materiality, of water. From your perspective, is it possible to feel an image, to experience it if not through vision?

AO: When I was a child, my father told me a folktale from the Arabian Nights. He’s an Islamic education teacher. That cultivated a repository of images that I created for myself without ever seeing them, only hearing them. When I talk to people, I don’t see anything but images. After my secondary school exams, which were pretty average, there was only one thing I wanted to do: understand the image, explore it! And that’s how I got started with film. Today my goal is to overturn visual perception, to embrace the presence of the body beyond the two-dimensional screen. 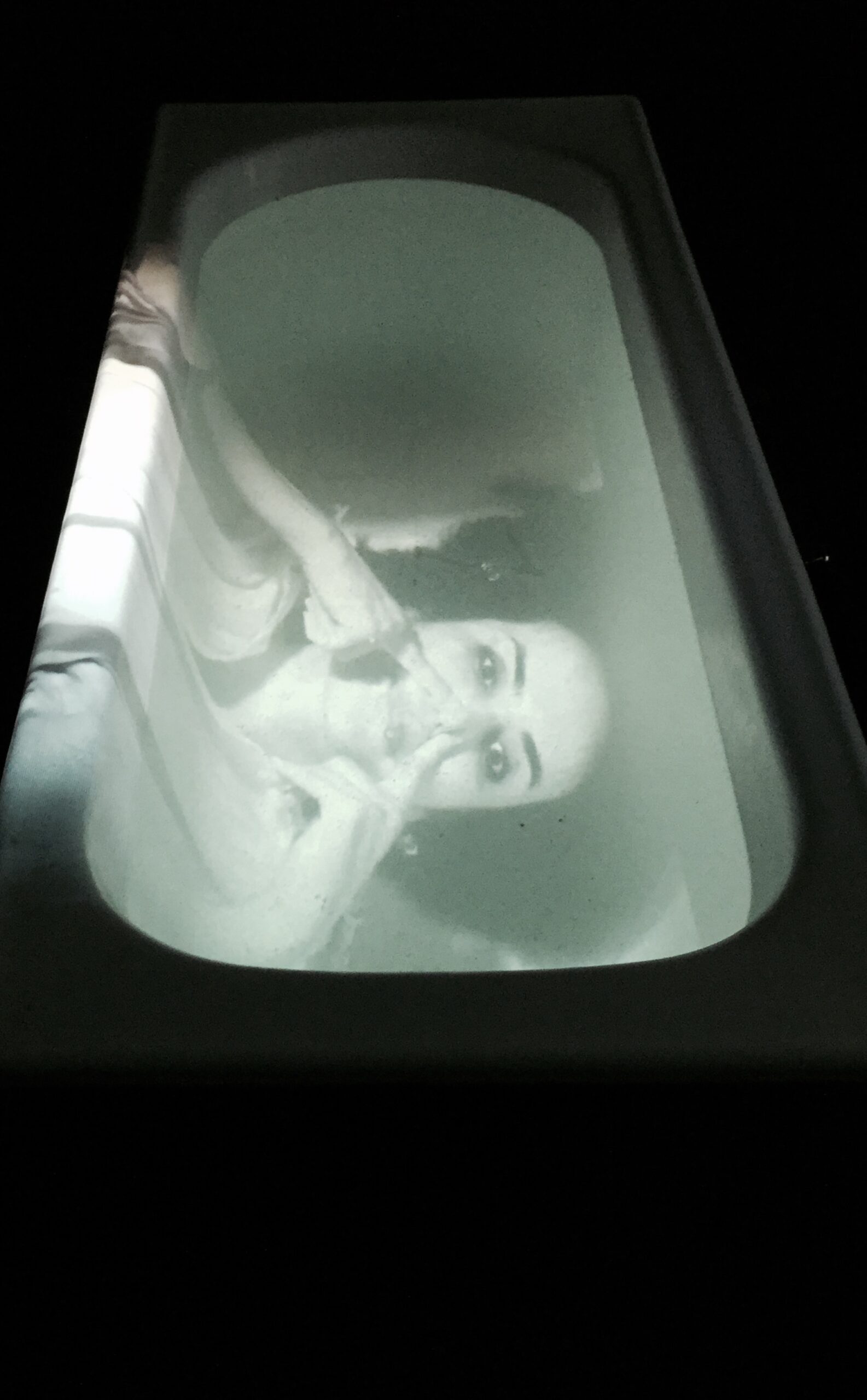 C&: So for you, are stories an important conduit of transmission and communication, of creating imagery?

AO: Yes, they are very present in the Arab world because many Arab cultural practices are based on speech rather than image. That gives rise to an imaginative world where everyone can be creative and not be stuck in stagnant images. On my first trip to France, I was overpowered by the abundance of pictorial advertising in public space. The pictorial culture in the Arab world is very connected to storytelling – that’s what keeps the imagination going. If I have a child, I’d like to raise them with a radio and record stories to play back, so they could make up their own visual world and not have it imposed from the outside. Too many images impose a vision of the world. Figuring out how to perceive and produce the image while developing a personal story – that’s the point of my artistic practice. It’s a slow process like watching water flow along the crack of time.

C&: So art is a metaphor between existence rooted in the local that is always embedded in a duality with globalism…

AO: Art has neither borders nor limits. It can be shared throughout the world. I’m very interested in that exchange art creates across the meetings of cultures, perceiving and imagining things differently than we would in regard to our own given cultural space. In my view, that’s how art can spark the possibility of creating individual identities for everyone, tied to the specificity of our roots. Having an anchor in the specificity of being is what gives art that universal dimension, as a medium for communicating about the depths of the human.

Elsa Guily has studied art history and is an independent art critic living in Berlin, looking at the intersection between decolonial practices, critical theory and visual representations.