Laboratory of Solidarity: Emory Douglas I

Zapanteras: Solidarity as an Artistic Principle

What do the Zapatistas share with the art of Emory Douglas and the Black Panthers? asks our author Heriberto Paredes...

Referring to the title of an exhibition at the NGBK in Berlin, “Laboratorium der Solidarität” we want to start our new series, focusing on solidarity movements. Because at this very moment we are experiencing an entire global movement calling for solidarity. In a time of uncertainty, people all over the world are prepared to act jointly. People are in solidarity against the Trump government. Against populism. Against racism. In solidarity for the preservation of the environment. In solidarity in the aftermath of terrorist attacks all over the world. This has inspired us at C& to take a closer look at important historic as well as present moments of people getting together to form solidarity movements, to fight for justice.

At the end of 2016, the Zapatista National Liberation Army (known by its Spanish acronym, EZLN) issued a communiqué proposing, among other things, their specific vision of art: “In contrast to politics, art doesn’t try to readjust or fix the machine. Instead, it does something more subversive and troubling: it shows the possibility of another world,” writes Subcomandante Insurgente Galeano.

This isn’t the first time Zapatismo has presented ideas on artistic work. In fact, since its public appearance in January 1994, the EZLN has implicitly or explicitly expressed an artistic sense that separates it from other politico-military or social organizations. Poetry has been the principal form of expression, but always in connection with the colors in many of the constructions of the indigenous communities constituting their social base. Murals began to expand horizons and many new worlds have been drawn on the planks of the walls.

Emory Douglas, Minister of Culture for the Black Panther Party between 1967 and 1981, a visual artist as well as social activist, joined the art movement in indigenous Zapatista communities to dream up new worlds. Following an invitation to an art residency directed by Caleb Duarte in 2012 at the EDELO cultural center (whose full Spanish name translates as “Where the United Nations Used to Be”), Douglas visited several communities and met young painters. The meeting was resonant and emphatic and continues today after several visits by the American artist. The project was named Zapanteras.

In a chat with the ever-smiling Emory Douglas, he describes that his first meeting with the Zapatista communities affirmed his expectation: “There are currently many connections on a worldwide level; it is no longer only about individual contributions but instead global connections to strengthen the struggle.” For Douglas, “We have to continue to fight until achieving the objectives, there is no other way to continue than to fight.” Art is the trench Douglas has built to continue fighting no matter what.

What do the Zapatistas share with the art of Emory Douglas and the Black Panthers? 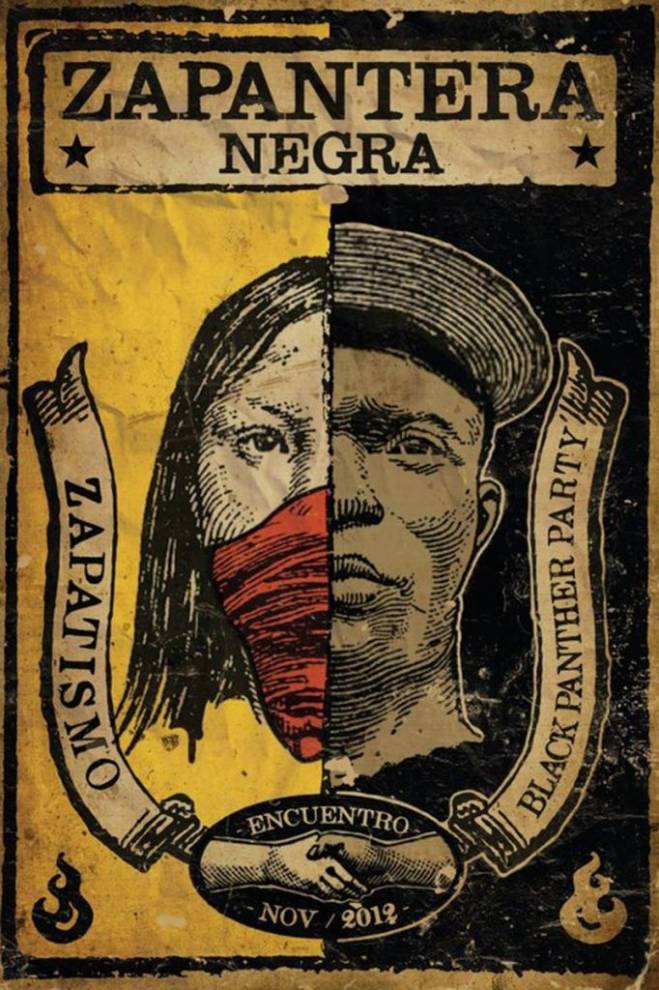 Solidarity is a vessel of communication between these two worlds. On one side, the Zapatista communities’ struggle operates under a core principle of building ties of solidarity with different worldwide struggles. From 1994 to this day, there have been displays of solidarity, from declarations to the food deliveries to communities in need. In the same manner, many worldwide struggles have shown solidarity with the Zapatista struggle by building schools or supporting different political initiatives that have been disseminated.

On the other side, the Black Panthers have long considered solidarity a central principal in their political struggle. The party has expressed solidarity not only for the liberty of many political prisoners but also in African countries’ fight for independence and for an end to the war in Vietnam. The eighth point of their political program states, “We want the immediate end to all wars of aggression.” This is an example of the connections that have erased borders and helped strengthen Zapanteras.

Besides solidarity, there is an underlying political concept that, in my opinion, is fundamental when political and social movements attempt to join forces. For both Zapatismo and the Black Panthers – as well as for Emory Douglas – revolution is not something to be obtained or reached; on the contrary, it is the process, the path along which the struggle is maintained, a life’s work.

“There are many who continue to fight day in and day out. They aren’t visible but they are there and the processes move forward thanks to these people. For me, the revolution is this process, this path of protest and struggle,” he said back in 2012, after the birth of the Zapanteras. Under this same conception, Zapatismo has walked in silence since its formation in 1983 and later publicly in 1994 with a fundamental symbol that encapsulates this long-term essence more than the seizure of power: the ski mask.

The result of these vessels of communication is undoubtedly a decisive contribution to political art, to the imagination of many possible worlds that are still nourished by colors, textures, and diverse figures and symbols. The drawings produced while Douglas was Minister of Culture for the Black Panthers are being now redesigned through new symbols – such as the ski mask and maize – to create a new committed art.

Besides the work belonging to Zapanteras, music is also incorporated, and this meeting motivated Manik B, visual artist in residence of the Mexican state of Chiapas, to write a tribute that seals the dialogue that enabled political art among Zapatistas and Black Panthers:

From their wandering vigil

with Black Panthers  […] […] Larga la noche que a azotado
a pueblos hermanos
África y América
ya no serán sus esclavos. Long is the night that has ravaged

will be enslaved no more.

As part of Zapanteras, a major editorial project will soon be published that extensively documents this experience in the necessary detail. Zapantera Negra: An Artistic Encounter between the Black Panthers and the Zapatistas is being published by Common Notions in New York, thanks to the work of Marc James Léger and David Tomas with the involvement of Emory Douglas and EDELO. We hope the future brings translations and publications that reach many more corners of the world.

Heriberto Paredes is a Mexican Journalist and photographer who works about resistance histories.