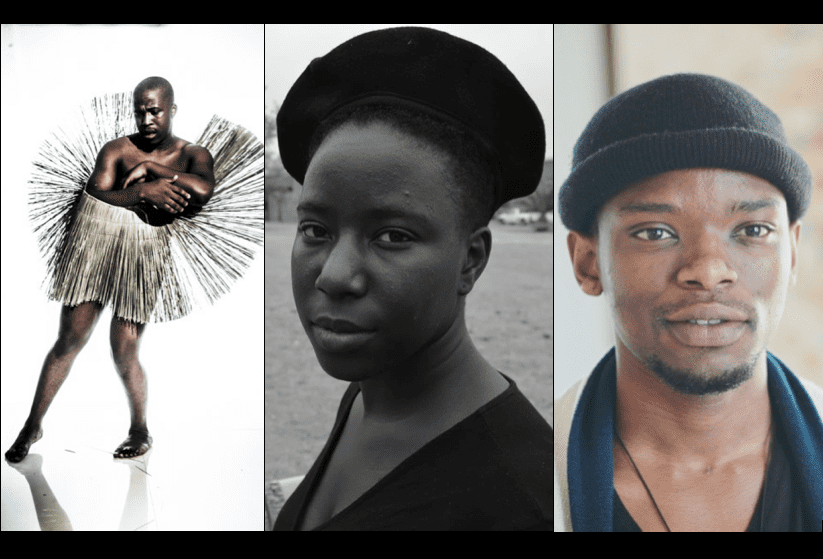 As recipients of the award, Uambembe, Sibeko and Mgibe, will receive mentoring from internationally established South African artists, Zen Marie, Bettina Malcomess, Donna Kukama, Tracey Rose, and Laura Windvogel (aka Lady Skollie), during an intensive eight-week residency at the Bag Factory Artists’ Studios, culminating in the opportunity to present their work at the prestigious FNB Art Joburg Fair (13-15 September 2019) at the Sandton Convention Centre.

The David Koloane Award benefits emerging artists (under 35 and not represented by a gallery) who demonstrate passion, dedication and potential for excellence. Each year, the award gives focus to a different artistic medium, with the 2019 edition focusing on performance art for the first time. Some of the previous recipients of the award include Senzo Shabangu, Jarrett Erasmus, Ross Passmoor, Ziyanda Majozi, Zolani Siphungela, Bongani Njalo, Shenaz Mahomed, Nolan Stevens, Phemo Matlhabe, and Lwando Dlamini.

Helena Uambembe was born in Pomfret, South Africa in 1994 to Angolan parents who fled the civil war. Her father was a soldier in the 32 Battalion, a military unit within the South African Defence Force mainly made up of black Angolan men. The 32 Battalion and her Angolan heritage are dominant themes in Helena’s work, in which she explores narratives surrounding the Battalion, interweaving connected symbols and archival material. Uambembe’s work is predominantly performance and research based and in her installations, she includes printmaking, photographs and videos. According to the artist, performance has allowed her to capture individual and collective emotions, and sense to create an embodiment of lived experience when telling stories.

Oupa L. Sibeko is an interdisciplinary artist and scholar whose work has been shown around and outside of South Africa. His interdisciplinary praxis moves between theatrical, gallery, scholarly and other public contexts, overtly dealing with matter and politics of the body as a site of contested knowledge. Over the past few years, Sibeko has been developing and performing his work in solo and ensemble forms, extending to residencies, community work, research and festival participation. His work is dialogical and facilitates critical reflexivity. In his photography-performance projects, Sibeko often deals with deeply personal material bringing his spirituality, body and culture into play. Most recently he co-created a collaborative work for Dish, performed at Dance Umbrella 2019 at the State Theatre in Pretoria.

Wezile Mgibe currently lives and works in Port Elizabeth, South Africa. He often uses the concepts of black love and healing in his artistic practice, allowing his process to be welcoming and open to everyone, as part of a bigger journey of discovery in his public / site specific performances. Mgibe’s work often deliberately confronts prejudices and advocates against social inequality, and opens the door for critical self-reflexivity within unwelcoming spaces. He views Africa as a “crime scene”, one which “we as Africans are interrogating” on a daily basis. In his work, Mgibe then interrogates the dynamics of site, place and culture. He has been deliberate in highlighting his own black body in his work and has been conscious about his ability to being loved and offering love, which is for him, in turn, integral to the process of internal healing.