When Art Metamorphizes the City…

The theme of the third edition of the triennial Salon Urbain de Douala (December 3-10, 2013) was “Douala Métamorphoses.”

The Salon Urbain de Douala (SUD) is an exception among festivals of contemporary African art. Sponsored by the Cameroonian organization doual’art, SUD’s goal is not so much to give pride of place to African artists as it is to give art pride of place in the lives of the residents of Douala. The theme of the third edition of the triennial (December 3-10, 2013) was “Douala Métamorphoses.”

Potholed roads and sidewalks, chaotic town planning, architecture that oscillates between sheet metal shacks and tiled buildings that look like municipal swimming pools…Douala, the economic capital of Cameroon, is not the kind of city that guide books rave about. At best, it is described as having a vibrant nightlife; at worst it is tacitly ignored. Rare are those who take the time for a stroll through its streets.

And yet: if Douala is excessive, it is so for better as well as for worse. And eyes that know how to look can discover highly conceptual works of art in the middle of an intersection or of an informal settlement, on a sidewalk or on the banks of the river. The city counts more than twenty of these pieces, and virtually all of them were put in place by the same organization: doual’art.

Created in 1991, this self-described combination of contemporary art center and urban research laboratory is constantly imagining and reimagining what the Douala of tomorrow might be: a cultural capital, a center of thinking about the urban landscape, an ideal place for observing artistic practices… Its founders, Marilyn Douala Bell and Didier Schaub, believe that “if you are not constantly envisioning horizons beyond your own city, you let its imaginary waste away.” For years these two have worked tirelessly to inject life into the imaginary of Douala, to adorn it with new works and new ideas, in short: to “metamorphize” it.

“Douala Métamorphoses” was in fact the theme of the third edition of SUD – Salon Urbain de Douala, a triennial doual’art has been hosting since 2007. This visual arts festival takes the city of Douala both as subject of study as well as site of implementation. All of the participating artists complete a residence prior to the festival in order to immerse themselves in the city’s atmosphere and to conceive a work of (ephemeral or permanent) art they then unveil during the week of the “Urban Salon.” The event is thus the completion of a long process of reflection, research, and creation, carried out over the course of three years.

During SUD2007, the artists decided themselves what themes they wanted to tackle: the informal sector, the modern study of local traditions, the history of the city, and so forth. In 2010, doual’art preferred to choose a theme, and asked the artists to work on “Water and the City.” In 2013, within the vast theme of metamorphosis, it was proposals connected to architecture and urban planning that most interested the organization.

The announcement for “Ars & Urbis,” a series of meetings and discussions that took place during the festival, puts it this way: “Metamorphosis is understood as an organic reinvention that respects the spirit of the place but can modify its form, function, or nature. The transformation must occur by way of a comprehensive aesthetic design which is artistic, social, and economic, and contribute to the invention of an identity shared by all of the city’s inhabitants.”

For this edition, doual’art both refocused itself and expanded its reach: the former in the sense that it concentrated on four neighborhoods where it had already intervened repeatedly in recent years and also in that it explored a theme that has been at the heart of its interests since its creation; the latter in the sense that instead of contenting itself with isolated art interventions, it worked on the level of a neighborhood or zone treated in its entirety and as a whole. 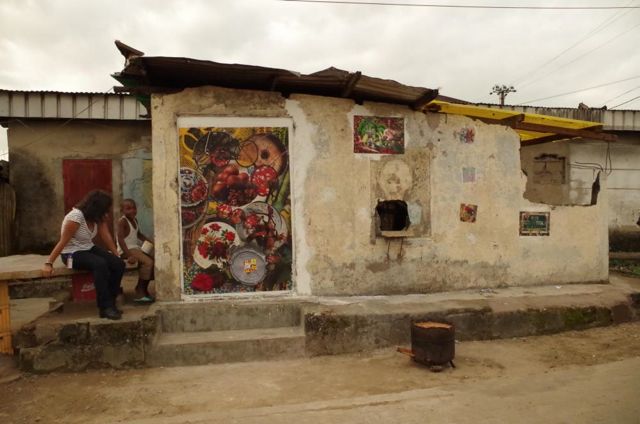 A sculpture garden by five Cameroonian artists (Hervé Yamguen, Kouo Eyango, Joseph-Francis Sumégné, Manuela Dikoumé, and Justine Gaga) will be set up in Bonanjo as soon as the necessary permits are granted, along with an experimental architecture project entitled PUB (Pavillon Urbain de Bonanjo). A series of portraits—Héros de la résistance camerounaise (Heroes of the Cameroonian Resistance)—was completed by Hervé Youmbi, and the Congolese dancer Faustin Linyekula presented his choreography Le Cargo. 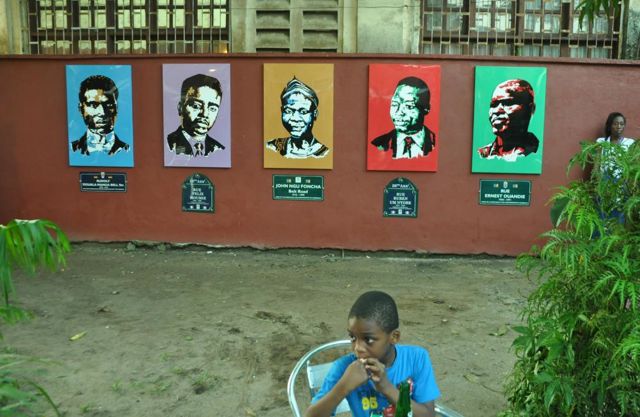 Only in the long term will we be able to measure whether the gamble of metamorphizing these four neighborhoods paid off: whether the spirit of solidarity has grown stronger, whether new activities have developed alongside the works realized during the festival, whether the movement has grown…

The third edition of the triennial SUD2013 took place December 3-10, 2013 in Douala. Its theme was “Douala Métamorphoses.”

Maud de la Chapelle is responsible for Africultures’ Sudplanète project. She is currently based in Maputo, Mozambique.