C&: The title “Giving Contours to Shadows” is in reference to Édouard Glissant‘s concept of opacity. What led you to choose it?

Bonaventure Ndikung: Glissant’s idea of opacity essentially means that we cannot necessarily recount history without gaps.   That is particularly apparent when you consider the example of the Caribbean. If you take people from a particular part of the world and transport them to another part of the world, of course there are gaps. Glissant presented this idea for the first time in May 1969 at a conference with Octavio Paz at the National Autonomous University of Mexico, and everyone thought to themselves, “Is this guy nuts? What is that supposed to mean?” The historians were almost ready to lynch him! Now, 40  years later, everyone’s kissing his feet. These gaps are there and that’s a good thing. But what was crucial for this exhibition was his assertion that we shouldn’t relinquish history to historians alone. All of us, by which he meant authors in general, are entitled to write history. By writing history, we do our part to help build society. That was a point of departure for my colleague Elena Agudio and myself, which set the whole project in motion.

C&: Along with your exhibitions at SAVVY Contemporary and n.b.k., you have a number of satellite projects, including ones in Lagos and Nairobi. How did you choose the cities to exhibit in?

BN: Our focus was on where it would be situated. Which sites are especially relevant, and which discourses? What sorts of issues speak to the people there? That’s how we chose Nairobi, for instance. There, we discussed topics such as forgetting, amnesia. Our collaborator Jimmy Ogonga had spent years working with curator Simon Njami and others on a project about amnesia. It was important to come together with my fellow curator Storm Janse van Rensburg as well as intellectuals like Jacob Barua, Wanja Kimani, Tom Odhiambo, Ato Malinda, Miriam Syowia Kyambi, and Binyavanga Eric Wainaina, to talk about topics such as Beyond Amnesia: Alternative Narrations and The Written, The Spoken: Legends, Myths, Fictions & Histories. That is how satellites really work. The point is to explore what is happening there, but also to put a spotlight on those cities. 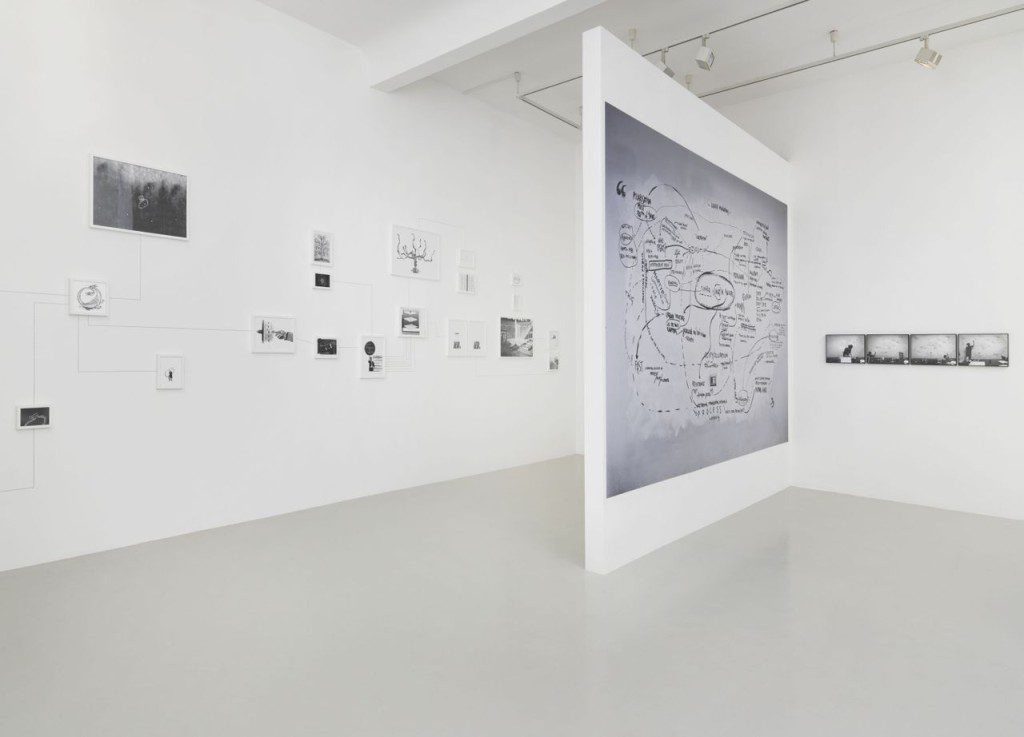 C&: How do you explain Germany as one of the exhibition locations?

BN: If you consider the fact that Africa was originally divided right here in Berlin, it makes perfect sense to use Germany as a location. You cannot discuss German history without considering Africa, and vice versa. Those are entangled or shared histories, even if their entanglements are asymmetrical. Then there is the fact of the matter that Germans are highly interested in disseminating their culture around the world. The Goethe-Institut and other German institutions have locations worldwide! It’s a question of cultural power, but also of cultural exchange. The TURN Fund focuses on conversations and collaborations between African countries and Germany. We should learn from one another. That’s at least how we understood it and, as such, how we structured our project. There are many discourses from the African continent that also have significance here in Germany. And Germany has plenty to learn from African countries.

Marius Babias: Compared to other countries’ funding programs, it must be acknowledged that Germany is defensive about spreading its culture. Of course that is informed by the underlying political and economic interests. At the same time we are aware that this reticence is related to the Nazi past. In those years, German’s policy consisted of playing countries against one another culturally and politically, of exploiting them economically – as can be seen from their treatment of the Balkan states, which under the Nazis’ so-called “regional planning policy” were deemed to be nations of spineless, subservient “Helots.” The objective nowadays is to repair the damage done in the name of Germany. This attitude, which still continues to hold sway 70 years after the end of the war, is largely due to the United States and American denazification and “re-education” programs, a fact that many would prefer to forget given resurgent anti-Americanism.

C&: One of the sponsors of “Giving Contours to Shadows” is the TURN Fund of the German Federal Cultural Foundation (KSB).

MB: Not only do large cultural events shape our own self-image, they are diffused in society at large and have a concrete impact. On those grounds, I consider the funding programs and focus areas of the KSB and other foundations to be immensely important. Savvy Contemporary’s exhibition concept existed independent of us. Working closely with the curators and the KSB, we considered where and how such a large project could be installed. The advantage of Neuer Beliner Kunstverein (n.b.k.) is that we have spent years developing a program that sees art and culture as media for critical observation of the world and oneself – and thus corresponds perfectly with the approach of “Giving Contours to Shadows.” So the application was approved – but that wasn’t enough to finance such a gigantic undertaking. We were then fortunate enough to receive generous financial support from the Ernst Schering Foundation. And we ourselves, the Neuer Berlin Kunstverein, have also contributed a sum from our regular budget.

BN: It was important to me to find a location in Berlin with a very good profile. A platform, where we could really bring about a discourse while taking some risks. SAVVY Contemporary has already claimed this site in Berlin… We are a small institution with no funding of our own, but with plenty of motivation to drive epistemological diversity. To achieve that goal, we also need good partners like the n.b.k. 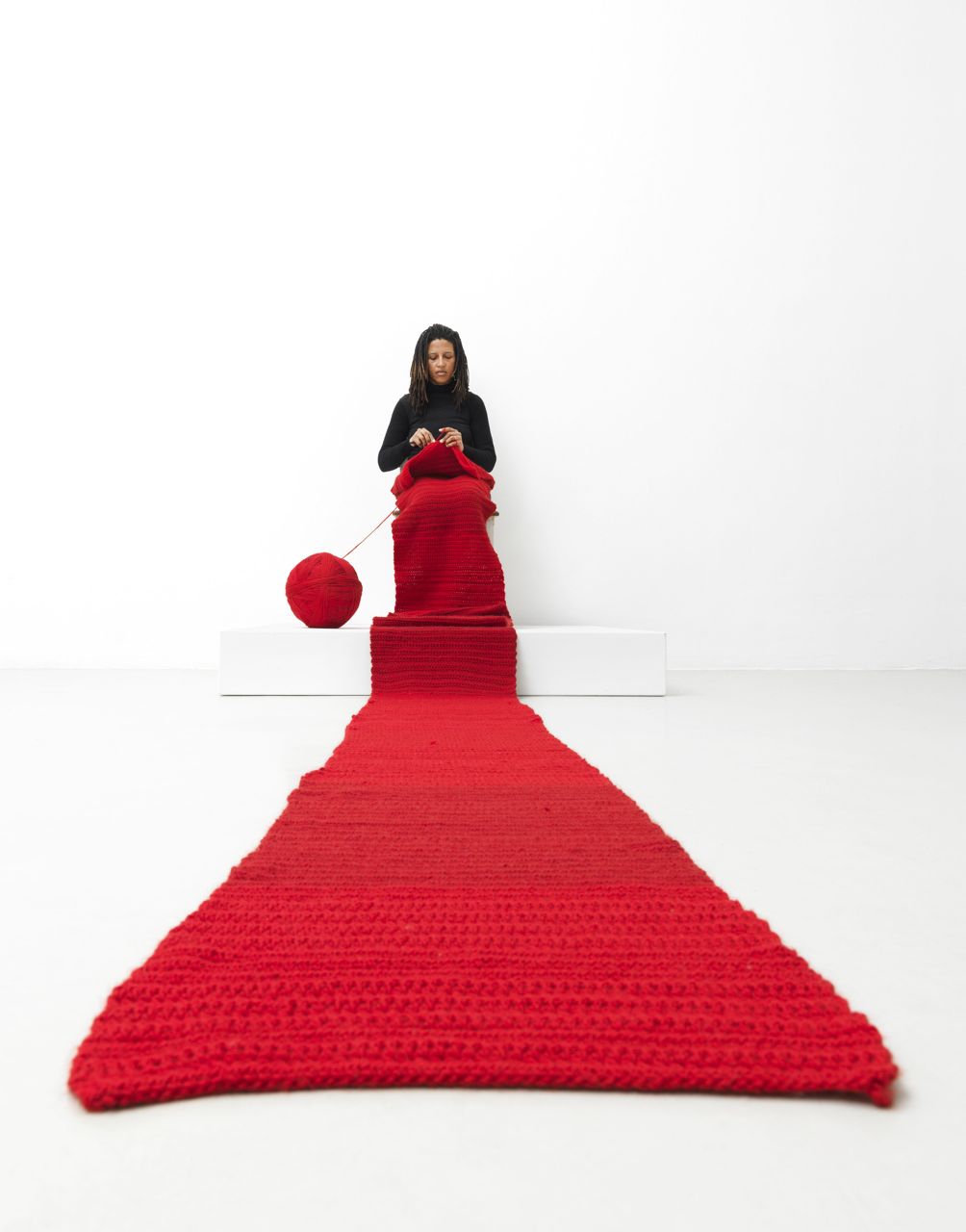 BN: But you might notice that almost all the artists were born after 1970. We wanted to work with artists of a specific generation, with people who didn’t necessarily experience colonialism themselves, but who lived through that immediate turn to the postcolonial era. There’s a fantastic article by Esiaba Irobi entitled “The Problem with Postcolonial Theory,” where he writes that the problem with postcolonial theory is that you only ever see yourself through the eyes of the Other. You never just see yourself. You try to legitimize yourself by means of the Other. But in my opinion, we’ve come so far that we no longer need that. Colonial and postcolonial histories are very important, but they are only an aspect of the history of the non-West. My generation needs new narratives, new entry points into precolonial history, colonial history, and our present time. We need to reread and reinterpret the writings of Cheikh Anta Diop and Martin Bernal. We need to situate the political and cultural positions of intellectual pioneers such as Léopold Sedar Senghor, Jomo Kenyatta, Aimé Césaire, or Mongo Beti in the context of our own time. We need to internalize the theories and philosophies of Glissant, Trouillot, and Walcott, and learn from curators like Njami and Enwezor.

C&: When we speak with today’s young artists, they are no longer focused on geography, but biography: their personal story. One may have studied in Paris and returned to live in Nairobi, while another has lived in Johannesburg all along. Their work is influenced by their own biographies and not by their countries’ colonial history.

BN: It’s very complicated and everything is over-analyzed. This exhibition is about history, about storytelling, about fiction. That is difficult to accomplish without geography or biography, but it also fits in better. The exhibition has five major themes, and that’s how we selected the artists. For a topic like “Performing and Embodying History,” you would naturally look for people who are interested in the performative. How can the body retell history? The gestures we make, the way we walk, the way we perform. All of that is history and that’s what we’re looking to see: its embodiment. Esiaba Irobi talked about “the body as site of discourse.” 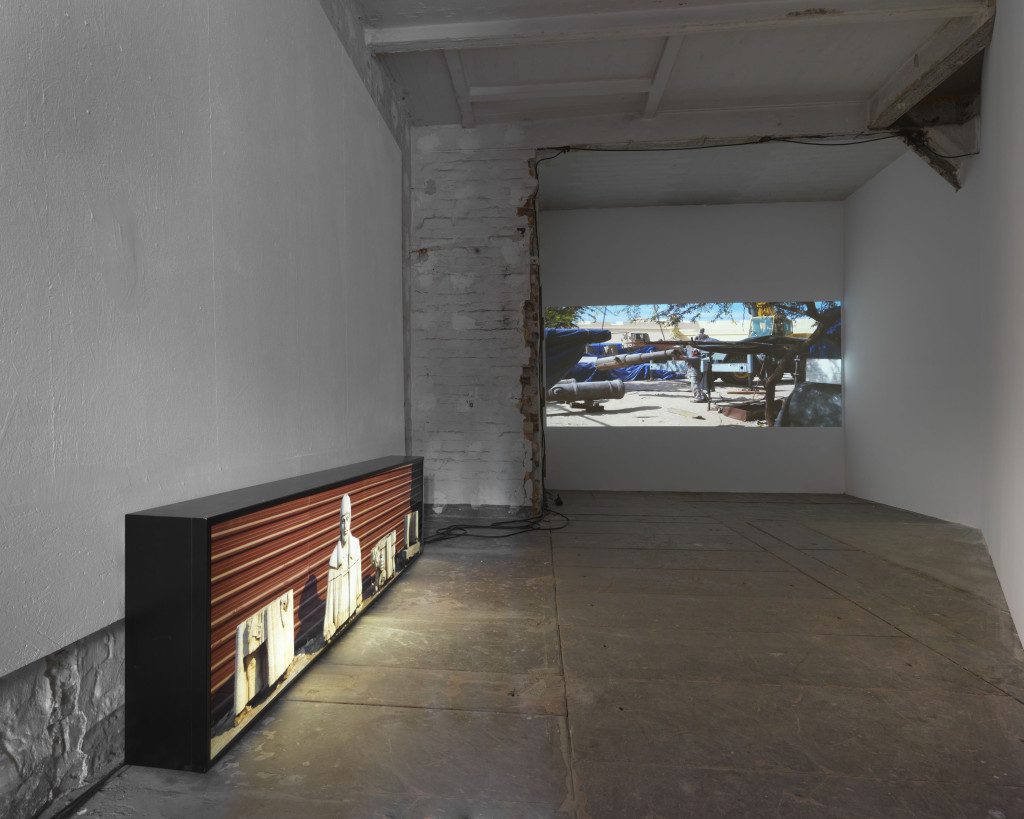 C&: During the biennale in Dakar, local journalists discussed why the Biennale Village was so difficult for the city’s residents to get to. That always poses the question of whether a biennale like that, which the art scene travels to participate in, actually plays any role for the society where it is situated, for the people of Dakar. How important is it for you that the local diaspora here in Berlin knows about your exhibition and the talks?

MB: You’ve addressed a very complex issue. On the one hand, it’s a great thing that biennales large and small are now being held in Dakar and Marrakesh, Bucharest and La Paz. At the same time, biennales are also marketplaces where the “Other” is invited to come out of the closet, to serve itself up for capitalist commodification. They also create alibis for the culture industry and relieve institutions in the West from the “burden” of paying attention to the periphery. The good thing about Bonaventure’s concept is that it places Africa, including the Diaspora, on equal thematic and geographical footing. One of the project’s central messages is the subaltern’s self-empowerment to write history. Another is the entanglement between art and post-postcolonial theory. The distribution of artists and round table participants, a total of 50 people, across 5 satellite projects around the continent of Africa and 4  exhibition sites in Berlin – the Neuer Berliner Kunstverein, Savvy Contemporary, Maxim Gorki Theater, and the Gemäldegalerie – as well as public space, is quite a tactical feat. With this approach, the central questions of repression and active self-liberation are indeed able to reach the Western center of power.

BN: First of all, I would like to point out that there are people like the guys working with Serge Olivier Fokoua from RAVY in Yaoundé who have been putting together a performance festival for years. Few people from the “Western” art world know about them, but they keep doing their own thing consistently. They are producing new knowledge and experimenting, and they don’t need any recognition from the biennale system.  Performance artists from the whole world make pilgrimages there. They won’t be at the Frieze fairs or Art Basel, but they do their work. And that is exactly what I see as important. These discussions of whether or not biennales are important are purely Western discussions, a manifestation of affluent society. The people who set up biennales in Bahia, Cartagena, Benin, or São Tomé and Príncipe are not wasting any time asking whether it’s important or not. One thing’s for certain. They always have an impact on society. Or let’s go back a few years. There were cultural magazines published in the Sixties, such as ABBIA in Cameroon or Soufflé in Morocco, but no one today has heard of them! Still, outstanding articles were written, and they’re out there. Anyone who’s curious about it should go and read them!

C&: That’s true. This shift in perspective is key. The festival you mentioned has been going on for years and no one there is interested in the fact that the “West” isn’t in attendance, because the West isn’t the center. The idea is, “I’m here! This is my center!”

BN: On the other hand, we can’t all live like we’re on an island. It’s about correspondence. As radical as they want to be, it’s also a good thing to be connected to other people. You just need to know where you’re from and what you want to do in the first place – and stand by that.