Jared Onyango: Me in a Square

Using Ritual to Create New Meanings for the Black Skin

At the Goethe-Institut in Nairobi, artist Jared Onyango captured the violent nature of the process of deconstructing historical meanings attached to the Black skin. Our author Enos Nyamor looks into Onyango’s performance and how it transcends aesthetics using ritual.

The audience arrived steadily until there was a large crowd gathered around the center of the performance space at the Goethe-Institut auditorium in Nairobi. Suddenly they formed a circle surrounding the fragile and unstable center, in which the choreographer Jared Onyango marked his territory and performed the solo dance Me in a Square, which was the first component of his mixed-media show Body in a Box. 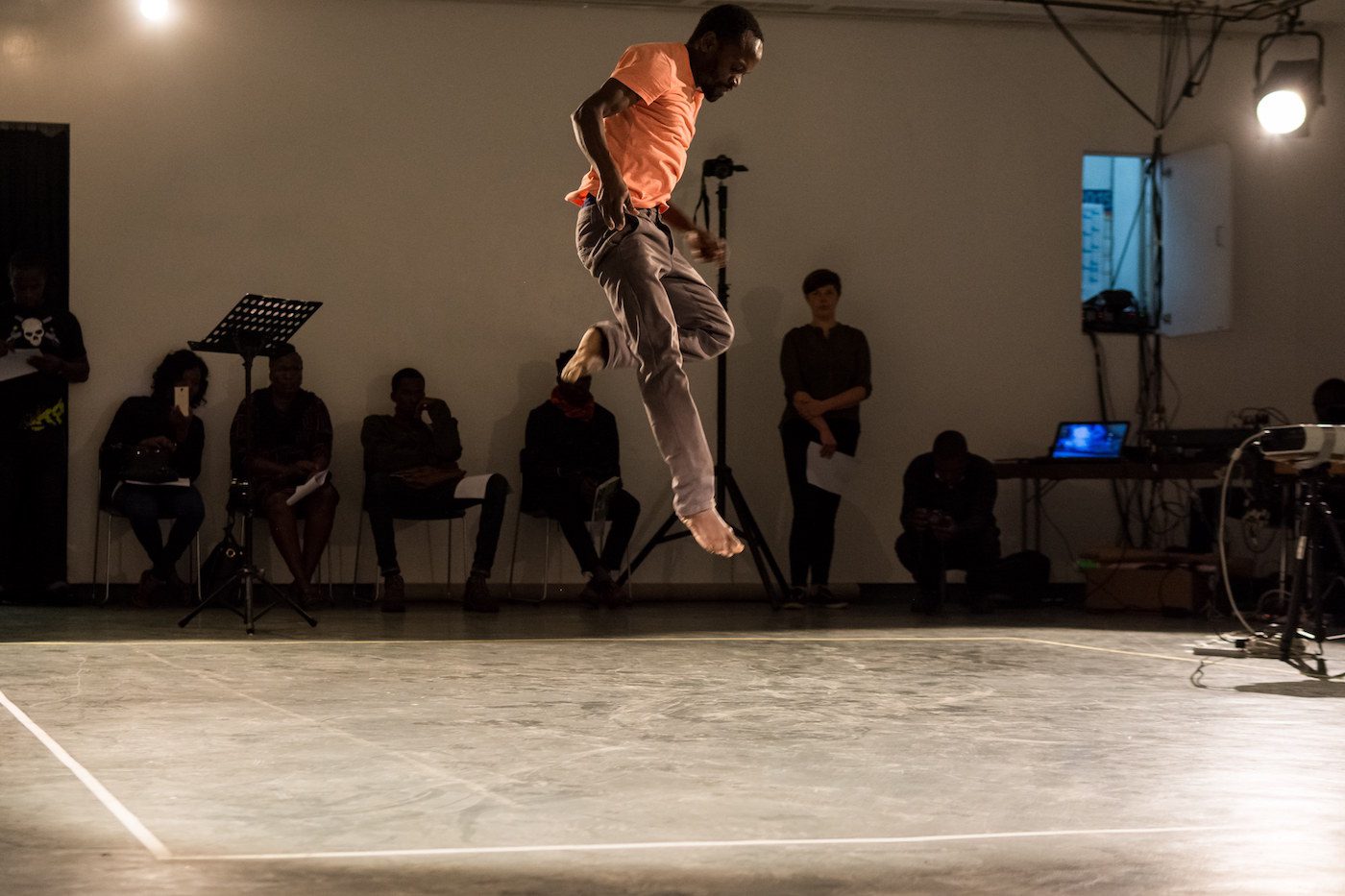 The first fragment of the dance unfolded with slow and elaborate movement within the square. Vectors of direction, velocity, and time variation charge Jared’s performance. The dancer executed the initial pattern of movement facing to one side and his back turned towards a portion of the viewers. He then rotated and repeated the circuit diagonally, impressing himself on the minds of the audience through repetition. He then transitioned into a vigorous and even vertiginous cyclone movement.

For dancers, the body is the canvas on which to express the state-of-mind and attitude. The selection of such a set-up ostensibly increased the performer’s visibility, especially when he danced around the audience while exploring with his body.

This dance was almost ritualistic, which is probably an indication of the choreographer’s training in African traditional dance under Mama Germaine Acogny’s tutelage at the Ecole des Sables in Senegal. From his time at this institution, Jared has consistently grown conscious of the need for African dancers to engage the body beyond the aesthetics. “A performance that doesn’t reference culture doesn’t have a life,” Jared said. 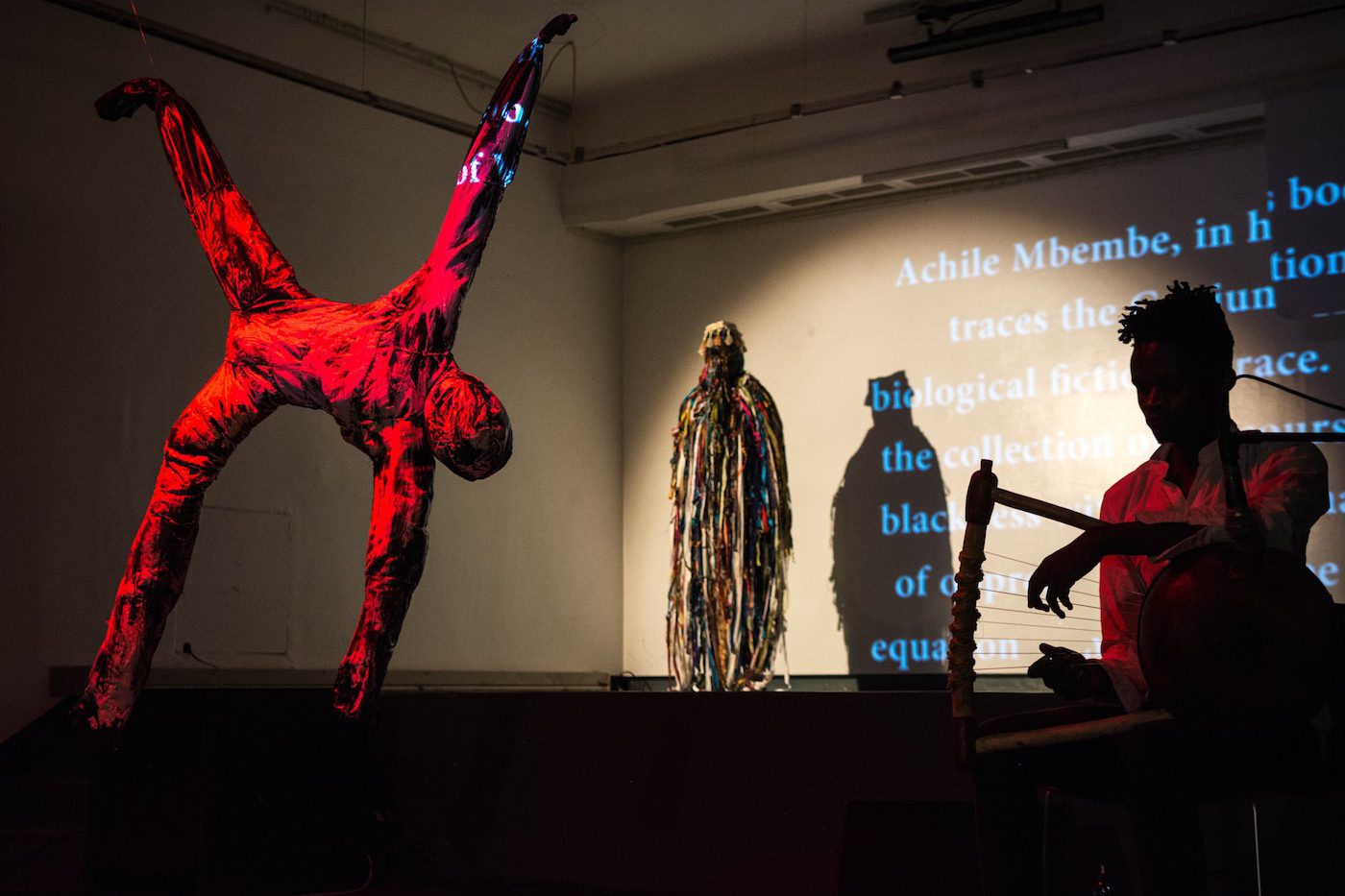 The exhibition also employed interactive technology within the public space. An installation of a frozen urban skyline embellished the performance with a form of emotional release. A projector panned on the installation table, splashing a large and apocalyptic shadow of a slanting church dome and bodies hanging desolately on power lines.

After the dance, the performance evolved imposing a balance of chaos and order. Garbed in a frond-like colorful costume, the performer repainted a dangling black sculpture white, simultaneously casting a spell. While the ritual represented deconstruction, it also denoted a way of orienting oneself in an unstable environment, of establishing bonds with the spiritual realm.

“Rationality can downplay the relevance of rituals in ‘underdeveloped communities,’” Jared said. “Yet the people in these societies are aware of mysteries that science is incapable of demystifying.” 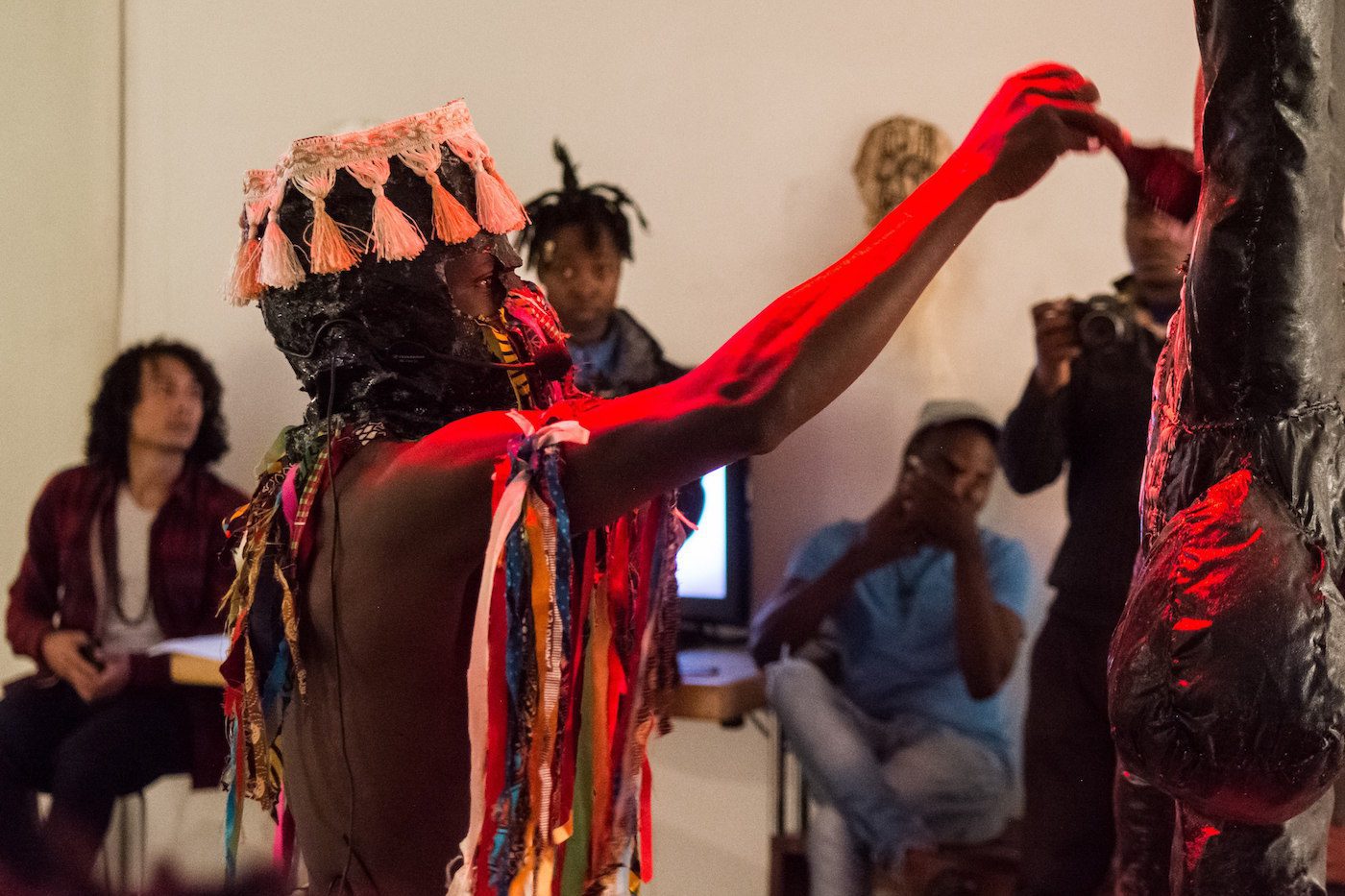 The peak of the performance came with the whitewashing of the dangling figure, a symbolic act reflecting on meanings of “Blackness,” specifically as a sediment of colonialism. Even so, Jared’s selection of white is grounded in religious concepts of purification and omnipotence. “The idea of Blackness, as we know it today, is a sequence of exploitations and inferiority complexes, whose end can only be apocalyptic,” he said.

Once he completed the ritual, the performance became increasingly metaphorical and abstract, embossing itself on the audience’s memory by evoking excitement about being in an unfamiliar space. The show achieved this quality by imprinting a shadow on the wall, dimming the lighting, and a therapeutic accompaniment of nyatiti, a traditional eight-stringed instrument played by Daniel Onyango.

The spotlight moved on to the walls of the auditorium until the performer broke the silence with a guttural incantation marking the beginning of the end and signifying a release from turbulence. The recitation of William Butler Yeats’ The Second Coming was in itself visceral and psychoanalytic, and perhaps its function was to reorient and reconstruct. As Jared cut down the repainted sculpture, it plonked to the floor, shrank and crumpled, emitting an immense gloom.